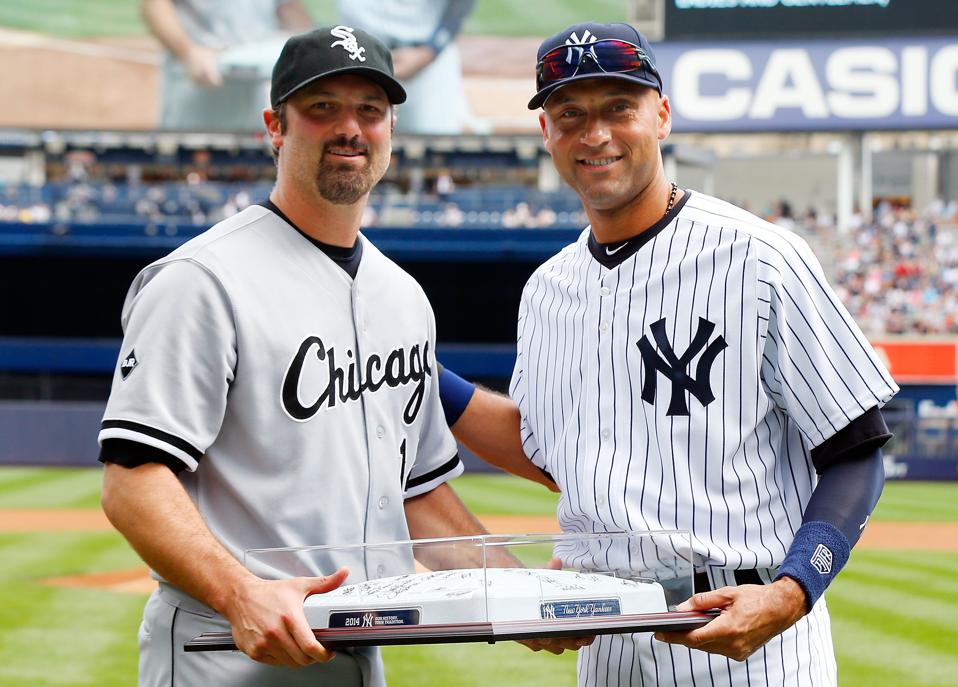 Paul Konerko was an exceptional hitter who is among all-time White Sox career leaders in hits, … [+] homers, and RBIs (Photo by Jim McIsaac/Getty Images)

When reviewing the annual list of players eligible to be elected to the Hall of Fame, there are always those players who many believe were great performers but just miss the mark at joining the elite men who grace the walls of Cooperstown.

Numerous baseball people believe Bobby Abreu and Paul Konerko were outstanding players but fall short of Hall of Fame status. But, why is that the case with these former All-Stars? The numbers they put up were exceptional and both made an impact on the game.

Abreu did it all during his 18 years in the majors—he hit for average and power, ran the bases well, and was an exceptional fielder.

He also ended his playing career with 60.0 WAR reading and a 128 OPS+ which by todays measures is Hall of Fame caliber.

There are only four players in MLB history with 500 or more doubles, 400 stolen bases, and 250-plus home runs—Abreu, Craig Biggio, Rickey Henderson, and Barry Bonds . . . that is elite company.

The Venezuela-born left-handed hitter played most of his career as a right fielder and his production was consistent — he produced eight seasons with 100 or more runs scored, eight years with 100-plus RBIs, and eight campaigns with at least 100 walks.

For a long stretch, he was one of the top run producers in the game, but it went virtually unnoticed due to the fact that he was not the superstar player . . . often being overshadowed by such teammates as Jimmy Rollins and Ryan Howard in Philadelphia or Derek Jeter and Alex Rodriguez with the Yankees or Vladimir Guerrero or Torii Hunter with the Angels.

Abreu also had two 30/30 seasons in which he slugged 30 or more homers and swiped 30-plus bases, and during the decade of the 2000s, he belted 408 doubles—only Todd Helton had more doubles (431) in during any decade in MLB history.

It’s a sure bet that Abreu won’t get elected this year or be as well represented as he should be, especially since baseball is a numbers driven game and his totals exceed many players already elected to the Hall of Fame.

Paul Konerko is another player who put up exceptional numbers that will likely be swept under the rug come voting time.

Konerko didn’t have great range around first base, but he had good hands and exceptional instincts as a fielder who consistently made the routine play and was excellent at scooping low throws out of the dirt. He did more than work hard at becoming an all-round player on defense and offense, he was the most feared hitter in the White Sox lineup and he frequently came through in high leverage hitting situations.

In postseason play, he hit .313 with seven homers and 17 RBIs in 19 games—he was the ALCS Most Valuable Player in 2005 when he helped lead the White Sox to a World Series title over the Houston Astros.

Konerko is one of 19 players to hit a grand slam in a Fall Classic contest, and the last American League player to accomplish the feat when he hit a two-out, bases loaded homer off Astros reliever Chad Qualls in the seventh inning of Game 2 of the 2005 World Series, giving Chicago a 6-4 lead in an eventual 7-6 victory.

Konerko epitomized the heart and soul of the White Sox during his time with the club and he produced on a consistent basis and fielded his position admirably.

“Pauly was a great hitter . . . an underrated player,” said former White Sox announcer Ken “Hawk” Harrelson. “He worked hard to be as good a hitter as he could be and he came through with so many big hits. He was a quiet leader on the field and in the clubhouse and was one of the most respected players in the game. He thoroughly enjoyed playing the game and loved to come up to hit in situations that warranted production. He’s the type of player who helped create a winning attitude just by watching him play and watching him prepare for a game.”

Konerko’s career WAR of 27.7 may form negative thoughts from voters, but his lifetime .841 OPS and 118 OPS+ and solid.

Both Abreu and Konerko will get some support on the Hall of Fame ballot, but it’s likely they will fall short of election. Fans and voters should remember, that both players were unsung heroes on their clubs and had stellar careers that deserve recognition.

The Science Of Gratitude: How It Affects Your Brain And How You Can Use To Create A Better Life

Why Business Owners Should Hate To Stagnate

An Inside Look at Google’s Future Plans

What Multifamily Operators Need To Know About Adding...

Meeting The Unique Challenges Of SMB Banking Through...