Breaking
In Need Of A Competitive Edge? Look To...
Think Small: Timely Picks To Capture The Reawakening...
Patient Gets Covid-19 Swab Lodged In Her Lung...
Nine Signs You’re Not Being Effective During Your...
Chromebooks Can Now Run Windows 10 – Find...
Will Biden’s Tax/Benefit Plans Help/Hurt You And The...
This Fashion Brand Turned A Stripe Into A...
Shots In The Dark: Why Access To A...
What Building Wealth Really Takes In Business
Building A Circular Economy In New York City...
How To Cast Your Vote Against Election Scams
New Science On Stress: Feeling Your Feelings Works...
Why Now Is The Right Time To Acquire...
7 Obstacles That Prevent People From Starting Businesses...
Booking Holdings Falls; Likely To Remain A Risky...
Apple iPhone Crushes Samsung Galaxy In Important New...
Home Business Handicapping The Best Bets For Long-Term Success Among The Current MLB Closer Crop
Business 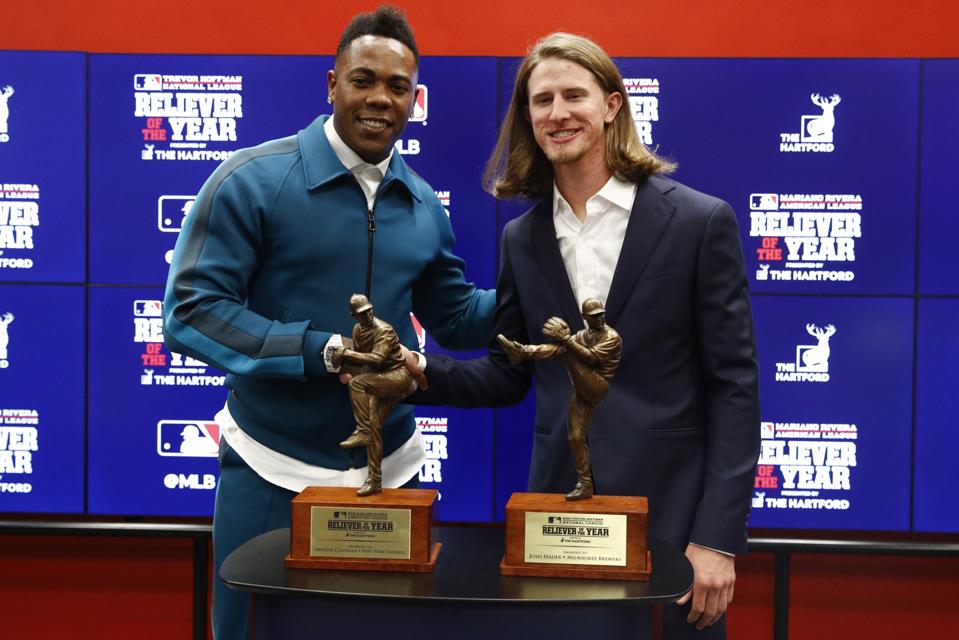 Milwaukee Brewers Josh Hader, right, and New York Yankees Aroldis Chapman pose with their reliever … [+] of the year trophies at a news conference before Game 4 of the baseball World Series between the Houston Astros and the Washington Nationals Saturday, Oct. 26, 2019, in Washington. (AP Photo/Patrick Semansky)

Over the last couple of weeks in this space, we’ve been taking a closer look at the current group of MLB closers. This piece summarizes their 2019 performance, with supporting data for AL and NL closers. This one covers their difficulties in lasting long enough to earn long, lucrative free agent contracts. Two other pieces feature Edwin Diaz, who was better than he appeared in 2019, and Alex Colome, who wasn’t as good as his numbers suggested. Today, let’s survey the current crop of MLB closers and identify the best bets for long-term on-field and financial success.

The previous articles have shown us a few things about closers. One, they’re really good, better than even the game’s elite starting pitchers on a per inning basis. They strike out batters at astronomical rates, manage contact quite well, and throw more strikes than you might expect.

Two, their stars burn brightly, and not often for very long. Most top closers don’t sustain their peak performance long enough to strike free agent gold, and those who do (paging Craig Kimbrel) often disappoint the clubs who invested in them.

Today, let’s look at a handful of the game’s best current closers and handicap their chances of sustaining excellence long enough to earn a future big-dollar, long-term deal.

Aroldis Chapman – Yankees – Age 32 – 3 yrs./$48M (thru 2022) – This guy’s been throwing 100 MPH in the big leagues for a decade now. His command is just OK, but when you excel at both missing bats and managing contact (76 Adjusted Contact Score in 2019), that’s fine. He muffles fly ball authority, induces pop ups while allowing few flies, and has had his workload managed quite well. All that said, it’s tough to project another big, long-term deal after the current one ends prior to the 2023 season. He may have to go one or two years at a time if all goes well until then.

Kenley Jansen – Dodgers – Age 32 – 5 yrs./$80M (thru 2021) – The contact management aspect of Jansen’s game remains strong. He also posted a 76 Adjusted Contact Score in 2019, and is a pop up machine who mutes contact authority of all types. However, his K rate plunged from stratospheric levels beginning in 2018, and is now merely very good. Toss in a heart condition which has required surgical intervention, and there is risk here. His cutter-centric repertoire gives him a high floor, but I’d have a hard time investing big years and dollars two winters from now.

Josh Hader – Brewers – Age 26 – 1 yr./$4.1M, FA 2024 – Our 2020 “wow” guy. How’s a 47.8% K rate grab you? Even in this company, that’s outlandish. There are some red, or at least orange flags here. Hader allows very loud contact, and once he allows more of it, this could be a real problem. His 43.3% fly ball rate was the 2nd highest of any 2019 closer, and his average 93.9 MPH fly ball authority allowed was the highest. Toss in his max-effort delivery and the extreme reliance on his fastball (80% usage), and there is big risk here. He’s taking it year-to-year contractually in hopes of maximizing his long-term earnings, assuming quite a bit of risk. I’m far from sure he’ll still be a monster in 2024.

Edwin Diaz – Mets – Age 26 – 1 yr./$5.1M, FA 2023 – Our 2019 “wow” guy. His raw numbers suggest he was awful last season, but the fact is that he allowed less authoritative contact than Hader, and posted almost exactly the same (111) Adjusted Contact Score. There are plenty of similarities between Diaz and Hader, from the power stuff to the max-effort deliveries to their fly ball profiles. Two reasons to prefer Hader – he’s bigger and stronger, and gets a ton of pop ups to go with the flies. Diaz posted a 41.4% fly ball and only a 2.4% pop up rate. Not a good combo. I like Diaz to bounce back in the short term, but I’d be very hesitant to make a massive 2023 investment in him.

Liam Hendriks – Athletics – Age 31 – 1 yr./$5.3M, FA 2021 – Why I am calling this guy the best? He and the guy below him are the only two closers who have excelled at missing bats, minimizing walks and managing contact for multiple years, and are still ascendant in their respective careers. Hendriks also has shown an ability to carry a heavy innings load for a short reliever. His slider has broken through to become a second out pitch alongside his fastball which he threw at an average velocity of 96.8 MPH in 2019. He missed considerable time with a groin strain in 2018. If he holds up and dominates, he’ll be worth a sizable free agent contract following the 2020 season.

Kirby Yates – Padres – Age 33 – 1 yr./$7.062M, FA 2021 – Yates’ K and BB rates were even better than Hendriks’ in 2019, and his contact management ability (94 Adjusted Contact Score to Hendriks’ 82) was comparable. It took this guy awhile, but once he came out of the Rays’ closer factory in 2017, he became and has remained a monster. His out pitch is a devastating splitter which he introduced in 2018. He throws it a lot (42% in 2019), and it would seem to increase his injury risk over time. He’s older, but another healthy season in 2020 puts him in line for a big contract…..that his club may come to regret.

Taylor Rogers – Twins – Age 29 – 1 yr./$4.45M, FA 2023 – Of these two guys, I really like one (this one). He was serviceable until his 2018 breakout, and stepped up in role in 2019. Rogers walks no one, and though he doesn’t whiff as many as most others on this list, his improving 95.4 MPH fastball and two separate above average breaking balls (curve and slider) make him a very tough matchup for lefties and righties. He’s also a big ground ball guy who thwarts authority of all batted ball types. On top of it all, the Twins seem to know what their doing pen-wise, and are a good club that will give him plenty of leads to protect. Future is bright.

Brandon Workman – Red Sox – Age 31 – 1 yr./$3.5M, FA 2021 – Until 2019, Workman was a perennial disappointment in Boston. Then, wow. I’m here to tell you that by and large, it wasn’t for real. On the positive side, Workman misses plenty of bats, and like Rogers is a prolific grounder generator. On the other hand, he still has below average command, and he was VERY fortunate on balls in play last season. He is utterly reliant on his curve ball, which he throws almost half of the time. I’d have a hard time hitching my wagon to a closer who throws his fastball at just 93.5 MPH and throws it only a third of the time. Expect regression in 2020, if there is a season, and a modest market in free agency in the fall.

Jose Leclerc – Rangers – Age 26 – 4 yr./$14.75M (thru 2022), tm opts. 23-24 – The Rangers are ahead of me on this one, as they already can lock Leclerc up through 2024 without his annual salary exceeding $6.25M. This could prove to be a massive bargain. He combines a 96.9 MPH fastball with an out-pitch splitter that he throws about 35% of the time. Missing bats is not a problem, and his contact management skills are potentially elite. He posted a 66 Adjusted Contact Score in 2019, best among all MLB closers. His 7.4% pop up rate was 3rd behind only Hader and Sean Doolittle among this group, and Leclerc didn’t yield nearly as many flies as those two. Improved fastball command and – of course – continued health are all that Leclerc needs to be truly elite.

Nick Anderson – Rays – Age 29 – 1 yr./@$555K, FA 2025 – The Rays are at it again. They stole this guy in a trade with the Marlins last season, and he flashed brilliance down the stretch, though he has only one career MLB save at age 29. He’s a bird of prey on the mound at 6’5”, 195, and his slider is a legit out pitch. He’s quite reliant on it, throwing it 42% of the time last season. On paper, the Rays just might be the best team in baseball, so he’ll have plenty of leads to protect. And it will be three more seasons before Anderson is even arbitration-eligible.

3 Ways To Invest In Stocks Today