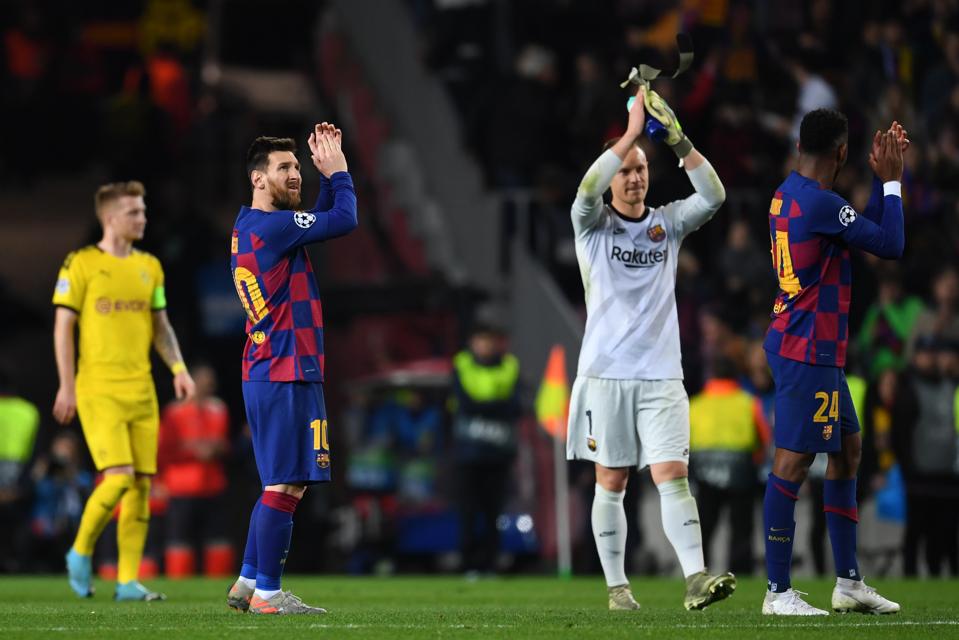 ‘Messidependencia’, or rather a ‘Messidependance’ on Lionel Messi by FC Barcelona, has been a thing since start of the decade.

Going on a straight run of four Ballon d’Or awards from 2009-2012, before scooping a fifth in 2015, the Argentine closing on an unprecedented six golden ball trophies from France Football and FIFA is as important as ever to his team at 32 years of age.

This was no more evident than at the Wanda last night, where, out of nowhere in the 86th minute, Messi bagged a stunning late winner that sank Atletico Madrid and moved Barça back to the top of La Liga with a gritty 0-1 victory.

Doing little to nothing for most of the match, Messi put in the epitome of a headline-stealing performance with the goal. Yet throughout the affair, as Diego Simeone’s men had the better of their visitors and were unlucky not to score more than once, Marc-Andre Ter Stegen was yet again the Catalans’ understated hero for not the first time in 2019/2020.

First came a stunning block with his legs from a close range Hermoso effort, when Joao Felix caught Junior Firpo and Ivan Rakitic napping at the back post on 19 minutes. And then, on the stroke of half time, a one hand punching save Alvaro Morato’s powerful bouncing header.

This paved the way for Messi, as mentioned, to steal the three points later, however it is important to recognise the contribution of both men at eithwr end moving the Blaugrana forward, as hasn’t been lost on pockets of the press in Spain.

“Hands of silver, feet of gold” ran the headline to a piece in Mundo Deportivo this morning, whereby Fernando Polo heaped praise on the pair.

“Mastering the two [penalty] areas always gives you an advantage,” he wrote, “and also allows you to win many games. If you also control the game and control the rival’s rushes [forward] even better. But the lesser evil is to have a great goalkeeper and the best striker/scorer/ player in history [which] is not bad at all. This is what is happening to Barca this season, in which despite not having regularity in their game are enjoying great performances by Marc-Andre ter Stegen between the sticks and Leo Messi in attack, who lest we forget missed the first four league games [of 2019/2020.”

The Champions League has also brought strong examples of their simultaneous joint-dominance. Ter Stegen was the sole hero in the 0-0 draw at Dortmund that opened the competition thanks to his penalty save from Marco Reus, but at the Camp Nou in October, he pulled off a startling reflex block to deny Lautaro Martinez with what would have surely put Inter Milan 0-2 up if a lesser shotstopper had been faced.

Messi then went onto provide the assist for Suarez’s winner in the 2-1 comeback triumph. And midweek, when his compatriots Dortmund also visited, Ter Stegen was again vital – especially in one-on-ones – prior to Messi scoring and setting up both Suarez and Antoine Griezmann to mark his 700th club appearance with a 3-1 win.

Over in the Spanish capital, MARCA’s Luis Rojo has also dubbed them ‘Valverde’s reliable duo’.

“Leo likes collecting prizes off the back of match-winning goals,” wrote Rojo in reference to the captain having soccer’s highest individual honour bestowed upon him in Paris this evening. “But by Messi’s side, Barcelona have a more silent hero. Marc-Andre ter Stegen is immense and he showed that again in Madrid.”

“The German was key at the Wanda with two big stops in the first half. We’ve already seen this this season too, with the clearest case coming at Borussia Dortmund,” Rojo went on. “Barcelona dependence on both was apparent at Atletico. Ter Stegen stopped them, and Messi finished them off.

“You can’t take anything away from players like Luis Suarez who are obviously important, but Messi and Ter Stegen are from another planet. They always appear. They always deliver points. Having these players is a luxury for Ernesto Valverde,” it was concluded.

Collision Of Crises: How Covid-19 Will Propel Drug...

How To Run A Startup Part-Time Without Working...