Congressional Democrats on Monday unveiled a sweeping police reform bill created in the aftermath of George Floyd’s killing⁠—but, before doing so, took a knee in memory of Floyd and other black people who died during police interactions while wearing kente cloth, a traditional patterned textile from Ghana—eliciting backlash from black writers and performers. 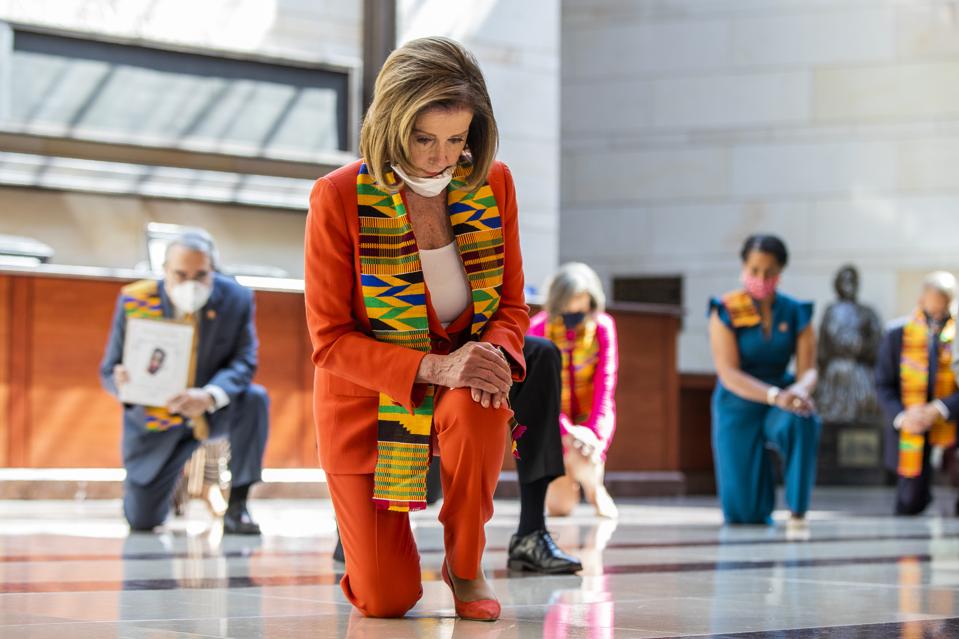 House Speaker Nancy Pelosi (D-Calif.), center, and other members of Congress kneel in a moment of … [+] silence at the Capitol’s Emancipation Hall on Monday.

The kente stoles were reportedly given out by the Congressional Black Caucus, according to NBC News reporter Leigh Ann Caldwell.

“I am not sure what’s funnier, those ridiculous politicians wearing kente cloth or Cory Booker smartly opting out of that absurd performance,” tweeted bestselling author Roxane Gay.

Karen Attiah, a Washington Post editor, said “I really need the guidance of my Ghanaian ancestors” after seeing Nancy Pelosi in kente.

“If there was ever a time for Ghana to enforce their intellectual property copyright of protection over kente + adinkra textiles the time is NOW,” tweeted fashion and costume historian Shelby Ivey Christie.

Comedian Nicole Byer said the Democrats should “hang up the kente cloth, write laws and defund the police,” while musician Questlove said he had to log onto Twitter and see the photos “to make sure the Roots weren’t pranking me.”

April Reign, creator of the viral hashtag #OscarsSoWhite, said the cloth-wearing was a “show of solidarity” from “more seasoned folks,” adding, “I just hope we don’t miss what happened after the performative part, which is that legislation is being introduced.”

“I admit that I did not have congressional delegations draped in Kente cloth on my bingo card,” Goldie Taylor, editor-at-large at The Daily Beast, wrote on Twitter.

Kente cloth, according to the Cooper Hewitt Smithsonian Design Museum, is a woven cloth made by the Asante and Ewe peoples in Western Africa, which is present-day Ghana and Togo. The highly-colored and patterned cloths as worn by members of Congress on Monday are also referred to as “prestige cloths,” and are intended for religious and ceremonial events.

Massive worldwide protests against racism and police brutality have taken place over the last two weeks. The demonstrations were sparked by George Floyd’s death, which happened after a police officer knelt on his neck for nearly nine minutes, and caught on video. Congressional Democrats unveiled a legislative proposal called Justice in Policing Act of 2020 in response. Written by the Congressional Black Caucus, the House Judiciary Committee, Senator Kamala Harris and Senator Cory Booker, the bill aims to reform policing by banning chokeholds and making it easier to prosecute police misconduct, along with a training program on racial bias and a focus on de-escalation tactics. It will likely pass the House, but the GOP-controlled Senate and President Trump have not yet signalled their positions on the bill.

Recognizing And Dismantling Your Anti-Blackness (Forbes)

UFC 250 Medical Suspensions: Multiple Fighters Including Amanda Nunes Out Up To 6 Months

PGA Events Turn To Social Media In The...