Breaking
The Biggest Scandal On Social Media Right Now...
Don’t Hold Your Breath For Biden’s Big Stimulus...
The Rise Of Substack—And What’s Behind It
Be Smart When Shopping For Additional Medicare Advantage...
Finally! The SBA Releases One-Page PPP Loan Forgiveness...
3 Tips To Get Your Website To Work...
Netflix Releases 4th Quarter 2020 Earnings: How Much...
How To Make Entrepreneurial Education 16x More Productive
11 Strategies For Praising Employee Work (Without Causing...
Starbucks Steps Up Its Racial Justice Outreach With...
Startup Surge: Pandemic Causes New Businesses To Double
Consumer Psychology Lessons From Carnival
Is Success Making You Lazy?
AT&T Stock Will Not Go Back To Its...
2021 CES Consumer Storage
Senator Marco Rubio Called Out Twitter For Its...
Home Technology Harman’s New SoundSticks 4 Reviewed… And They’re A Brilliant Update
Technology 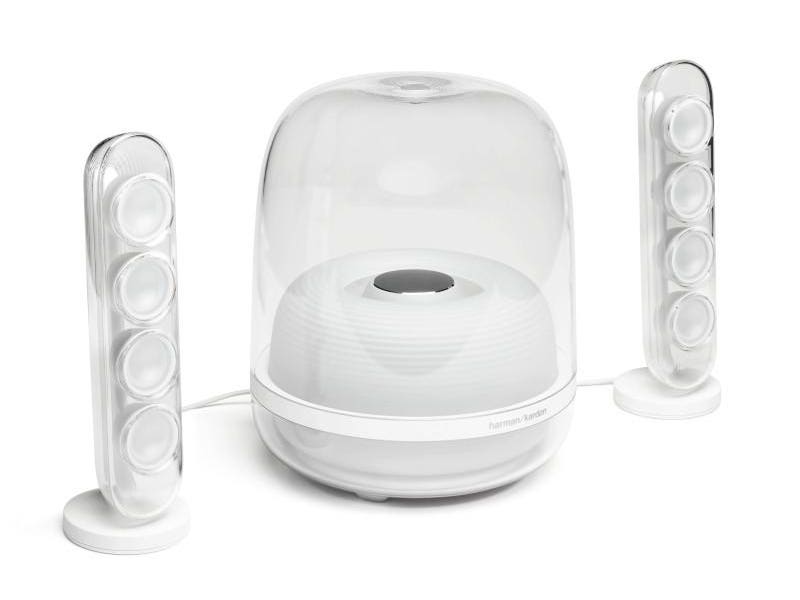 Way back in 2000, Harman Kardon launched the original SoundSticks, computer speakers and a subwoofer that were so original they rapidly became a design icon and mirrored the innovative design cues from the first generation of colorful Apple iMacs. Apple fans reacted with unbridled enthusiasm and Harman’s SoundSticks soon became one of the most sought-after desktop computer sound systems. In the early 2000s, hardly any advertising agency executive would be seen without a pair of SoundSticks on their desk. There had never been such cool and great-sounding computer speakers.

I doubt anyone involved with the original design and launch of the first Harman SoundSticks could have possibly imagined how iconic these transparent speakers would become, or that they’d still be in production some two decades on. It just goes to show that a bold and daring design can endure and that people will embrace the extraordinary if the engineering and design are as good as each other.

Last January, at CES, Harman announced that it would be launching the fourth iteration of the legendary SoundSticks and that they would be available from this Spring with a refreshed design that would draw on the heritage of the original SoundSticks with the same pillar-style, satellite speakers and a transparent subwoofer that adds extra oomph to any sound from a computer. The launch date has slipped a little, largely due to the coronavirus outbreak, but now the SoundSticks 4 are about to go on sale.

These latest SoundSticks have been reimagined with a cool new look and a beefed-up sound quality. In a bid to make the new SoundSticks as striking as the original, they still include two-pillar speakers with four drivers in each, plus a powerful 100W subwoofer that contains all the electronics and amplification. The subwoofer looks stunning with its driver covered with a white frosted material featuring a rippled texture. The internals are covered by a transparent dome – just like the original SoundSticks – but without an opening on top which was something of a dust trap on previous versions. The subwoofer fires downwards and provides much more heft to the sound but without being overbearing.

The build quality of the new SoundSticks has been considerably improved and tidied up. Gone is the external brick of a power supply and the clumsy speaker connectors. The subwoofer unit now connects directly to a mains power socket using a custom-made power cable that fits flush into the side of the casing.

Ranged around the base of the sub are two more sockets that are used for connecting the left and right pillar speakers. It’s a much tidier arrangement and does away with the ugly trailing connectors of the old version. The sub is smart enough to sit on a user’s desk and be admired. There’s now a push-button power switch and a 3.5 mm stereo jack input for anyone who doesn’t want to use the SoundSticks Bluetooth connection.

Unlike previous SoundSticks, the new design does away with the subwoofer level control for adjusting the amount of bass. It’s not going to be missed because Harman has now tuned the bass response of the sub to perfection. It’s pitch perfect.

The two satellite speakers have been tidied up considerably. Gone are the black donut ring stands. They have been replaced with tidy white plastic discs. The speakers can no longer be tilted back because they are now in a fixed and raked position and feel more solid as a result. Each speaker has four drivers covered with a diaphanous white mesh. Gone is the messy wiring of the old version. Everything has been tidied up and looks so much neater. The cables connecting the satellite speakers to the subwoofer are long enough even for large desks.

All in all, this is a brilliant visual refresh of the SoundSticks, and I thoroughly approve of the changes. The entire design looks sleeker and more coherent. The flush-fitting speaker connectors and lack of an external power brick make the SoundSticks 4 look far more visually appealing.

The inclusion of Bluetooth connection means the user can connect to the SoundSticks 4 wirelessly from a Mac or a PC. The connection quality on my iMac worked fine most of the time but I did notice disconnections and reconnections, signaled by a three-note chime that got rather annoying after a while. The engineers at Harman assured me there would be a firmware update for the connection issue for one or two Mac models. In the meantime, I resorted to using the 3.5 mm analog connection from my iMac. Not only did this stop the disconnection problem, it also provided perfect lip-sync with YouTube videos that can sometimes slip when using Bluetooth. I was surprised that Harman didn’t supply a suitable matching audio cable in the box. Maybe that’s something Harman could rethink.

When it comes to sound quality, there’s much more refinement to these new SoundSticks. There’s plenty of power onboard and the whole sound has been tightened up to remove any resonances or vibrations that can plague some computer speakers. The level of the subwoofer’s bass level is pitched perfectly, while the new satellite speakers sound far sweeter, more detailed and focused than the previous SoundSticks. The whole experience is tighter and better controlled without sounding overbearing or flabby. The SoundSticks 4 represent a genuine upgrade over the SoundSticks 3.

Verdict: These new Harman SoundSticks 4 represent the pinnacle of the evolution of the design and sound of these iconic computer speakers. The design has been smartened up and the SoundSticks now look cooler than ever. The internal power supply and neat speaker connections make the whole product look far more polished and luxurious. The subwoofer looks so beautiful you won’t want to hide it under your desk. If you need a pair of computer speakers or your old SoundSticks are getting a little long in the tooth, then I’d strongly urge you to take a look at the new SoundSticks 4. They look great and sound superb. Happy 20thAnniversary, Harman SoundSticks!

Pricing: The Harman SoundSticks 4 are on sale now and priced at $299.95. They aren’t currently available in the UK. I sincerely hope that changes as these are too good to only be sold in the USA.

If you don’t like the look of the Harman SoundSticks (how could you not?) or you want something that’s a bit more conservative-looking, why not consider the Ruark MR1 MkII Bluetooth speakers. I reviewed the Ruark MR1 MkI, way back in 2015, and they sounded pretty good then. I remember that they were able to belt out a lot of sound for such a small-looking pair of speakers.

When designing the MR1 speakers, Ruark didn’t use an off-the-shelf driver. Instead, the company’s engineers developed custom loudspeaker units to deliver a big sound from a small enclosure. Both the tweeter and bass units feature powerful neodymium motor systems which provide greater magnetic concentration, for better driver control, in a lightweight and fully magnetically shielded system. The Ruark MR1 speakers offer both Bluetooth and auxiliary inputs, so they’re ideal for streaming music from smartphones as well as computers.

Ruark doesn’t sell the MR1 into the USA but some dealers in Canada will ship to USA.

How APIs Can Transform Your Company