Breaking
Google Eliminates Key Home Security Offering
Which Party Is Best For Employment? Data Points...
3 Signs Your Latest Business Idea Has The...
Watchdog To Investigate Whether Trump Interfered With Health...
The Presidential Candidates’ Record On Small Business, Part...
Xtelligent Next-Generation Signals Use Algorithms And Artificial Intelligence...
Lawyer Pleads Guilty To Conspiring To Defraud The...
Consider Buying Encompass Health Stock For 20% Upside
Ranking The Best Claymores In ‘Genshin Impact’ (v1.0...
Do College Grades Predict Future Success?
How Gig Workers Can Engage With Organizations
Eight ‘Above And Beyond’ Vetting Practices For Executive...
Top Tips For Using Surfaces Across Google
E-Commerce SEO And How It Can Skyrocket Your...
Five Crucial Things You Shouldn’t Leave Out Of...
Artificial Intelligence And Africa: The Case For Investing...
Home Business Harvey Weinstein Found Guilty In Sexual Assault Trial, Faces Maximum Of 25 Years
Business 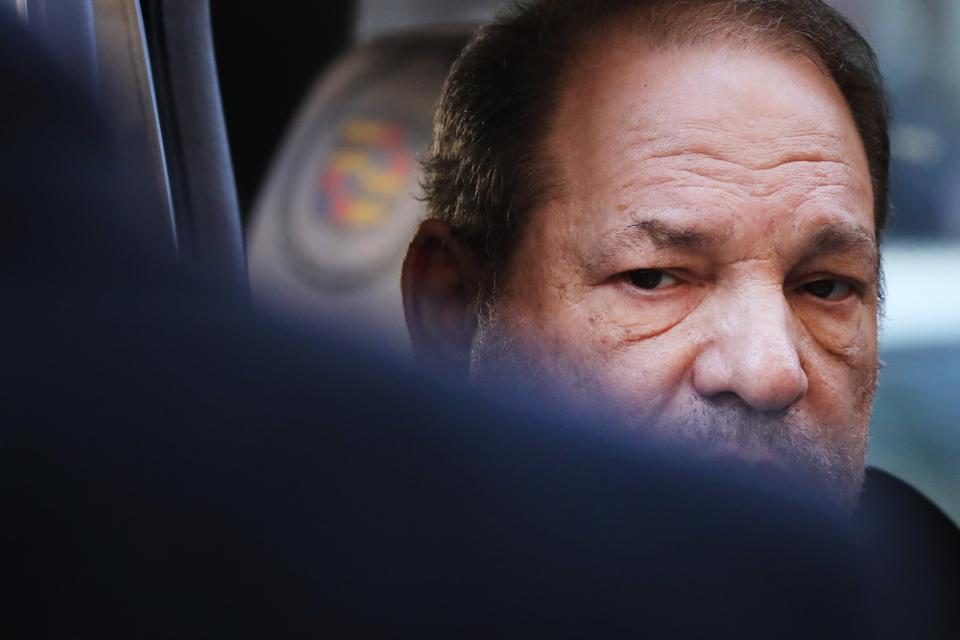 NEW YORK, NEW YORK – FEBRUARY 24: Harvey Weinstein enters a Manhattan court house as a jury … [+] continues with deliberations in his trial on February 24, 2020 in New York City. On Friday the judge asked the jury to keep deliberating after they announced that they are deadlocked on the charges of predatory sexual assault. Weinstein, a movie producer whose alleged sexual misconduct helped spark the #MeToo movement, pleaded not-guilty on five counts of rape and sexual assault against two unnamed women and faces a possible life sentence in prison. (Photo by Spencer Platt/Getty Images)

Topline: Disgraced Hollywood movie producer Harvey Weinstein was found guilty of criminal sexual act and rape in the third degree by a Manhattan jury Monday morning after almost 5 days of deliberations, bringing to a close one set of accusations in a landmark trial seen as emblematic of the three year old #MeToo movement.

Key background: The jury deliberations kicked off Tuesday amid accusations from prosecutors that Weinstein’s attorney, Donna Rotunno, had committed jury tampering by penning an op-ed Sunday in Newsweek. Burke took no action against him or Rotunno for the op-ed, but issued a reprimand in court Tuesday. Rotunno previously came under fire for giving an interview to the New York Times podcast The Daily, which she claimed took place before the trial began; the Times said the interview happened January 28, three weeks after the trial kicked off. Jurors were also instructed to take actress Annabella Sciorra’s testimony of an alleged mid-1990’s rape into account while weighing the predatory sexual assault charges, although the incident is too old to be charged on its own. Weinstein faces a maximum sentence of life in prison. Rotunno defended Weinstein by painting his accusers as opportunists who consented to sex because it would help their careers. Prosecutors, however, argued that Weinstein treated his accusers like “ants that he could step on without consequences.”

What to watch for: Weinstein’s sentencing in the New York case, and what happens in his California criminal case. There he faces four felony counts of sexual assault filed January 6 by Los Angeles County district attorney Jackie Lacey. Those charges are connected to incidents that allegedly took place over two nights in February 2013.

Tangent: The #MeToo movement was founded by civil rights activist Tarana Burke in 2006. The hashtag, however, went viral on social media in 2017 following the Weinstein assault revelations published by the Times and The New Yorker.

Who Should Decide The Fate Of Digital Banking — The Markets Or The Regulators?

From Open Hiring To Negligent Hiring: How To Reduce Risk And Promote Inclusivity