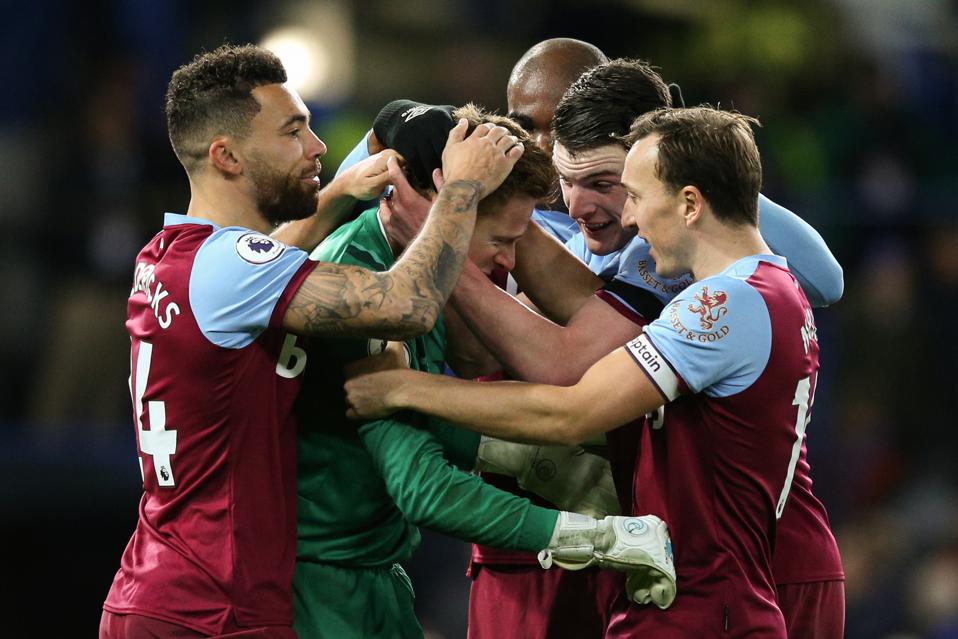 David Martin celebrates with West Ham United teammates at the final whistle of the Premier League … [+] match against Chelsea FC at Stamford Bridge on November 30, 2019 in London, England.

With managers dropping like flies in north London, the question in east London was whether another Premier League boss was about to join them?

With Spurs and Arsenal deciding to act before it was too late to rescue their seasons – dumping Mauricio Pochettino and Unai Emery respectively – West Ham’s Manuel Pellegrini looked to be the next in line for the sack. West Ham had gone two months without a win, had not kept a clean sheet since since 22 September and had slumped to 17th in the Premier League.

But, thanks to the heroics of a debutant goalkeeper with an impeccable Hammers lineage, Pellegrini has been saved – for now.

A first win in nine games gave West Ham just the boost they needed, particularly as it was away from home at Chelsea, a stadium that the Hammers have not won in for 17 years.

West Ham’s 1-0 victory was built upon the back of a clean sheet from a 33-year-old keeper making his first ever appearance in the Premier League. That David Martin is the son of Hammers legend Alvin, made the victory even sweeter for the East Londoners. That the former Millwall and MK Dons keeper was needed is the result of the sort of confused thinking at West Ham which has got the doubters looking closely at Pellegrini’s decision-making.

West Ham started the season with Lukasz Fabianski in between the sticks and in fine form. But the Polish goalkeeper’s injury brought Spaniard Roberto Jimenez into the team. Pellegrini had persisted with the former Espanyol keeper, also 33, despite a series of unfortunate errors which had contributed to West Ham’s slump. Eventually Roberto’s failings became too big to ignore and in stepped Martin.

Journeyman Martin, signed over the summer, had waited a long time for his first appearance in the Premiership. Such was the joy and relief at his clean sheet victory that there was an emotional hug with his father in the Stamford Bridge stands at the end of the game.

After the game, Martin said: ‘It just doesn’t feel real. I’m 33 now, I’ve had a decent career, I’ve played quite a few games but it still doesn’t prepare you coming into this…When I saw my dad we were both in tears, so we didn’t actually say a lot. But for my dad to see that here with the club he played for for 21 years, to make my debut, keep a clean sheet and get the win for the boys more importantly, it’s just a fantastic feeling.’

Aaron Cresswell’s goal completed the feelgood factor for West Ham, but one-however-unexpected-victory does not a season make. Not only have West Ham been winless in recent weeks, but they have been woeful.

The question remains whether Martin’s fairytale is a turning point for this West Ham team or an anomaly in a downward trajectory that would almost certainly see Pellegrini joining the list of London’s managerial casualties?

The Biggest Social Media Trends to Watch in...