Has Mr. Holmes Bakehouse Unlocked The Key To The Restaurant Industry’s Labor Crisis? 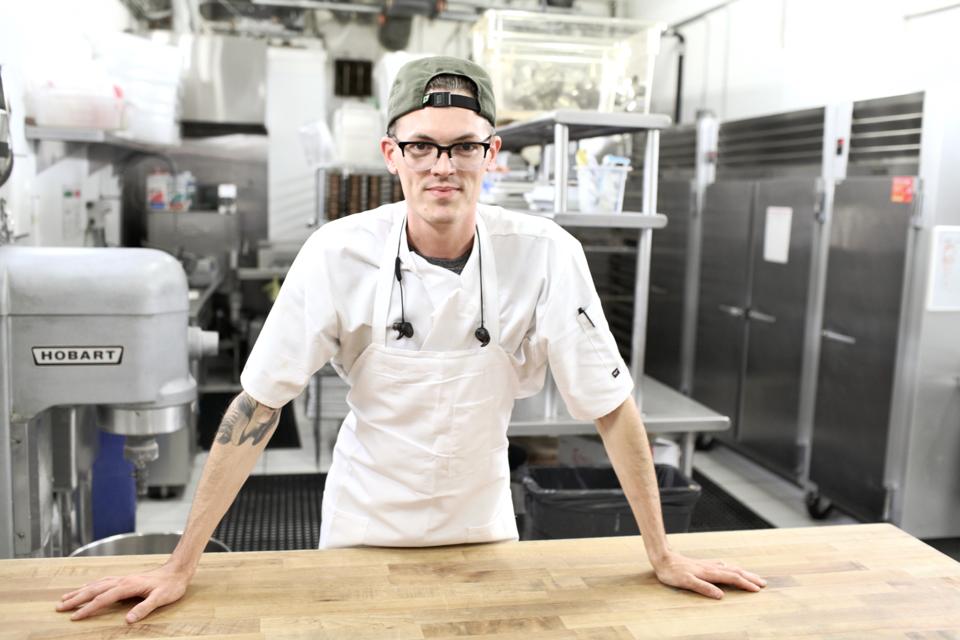 California added a dollar to its minimum wage law on Jan. 1, bringing the state’s required pay rate up to at least $13 an hour. While the increase is much-needed, some small and independent restaurant owners may now worry over what will happen to their already thin margins. But Aaron Caddel, the 28-year-old CEO and founder of Mr. Holmes Bakehouse, says he’s found a way to increase both profitability as well as, crucially, the money employees take home.

“We’ve solved a national problem,” says Caddel, a 2018 30 Under 30 food and drink listmaker. “It’s a meaningful story as well. We’ve rolled the dice in a way that could have tanked the business but it has made our company the most profitable it has ever been.”

Here’s how the new model works: Mr. Holmes Bakehouse quantified performance and then tied it to a wage scale. Caddel and his team spent two years breaking down every position in the kitchens into three core procedures that each person tests on to determine their wage and title. High performers are paid more than $20 an hour.

The Instagram savvy bakery chain now has two locations in California, along with 18 franchises in South Korea and Dubai and a substantial wholesale pastry business. In LA, for example, the chain sells pastries wholesale to more than 60 restaurants and coffee shops including chains like Intelligentsia, which further adds to the bottom line. As for profit margins, Caddel shares that the San Francisco location reached a net operating income of 36% this year. He also says that the new pay model has been the driving factor which has enticed $20 million in international franchise deals in 2019. 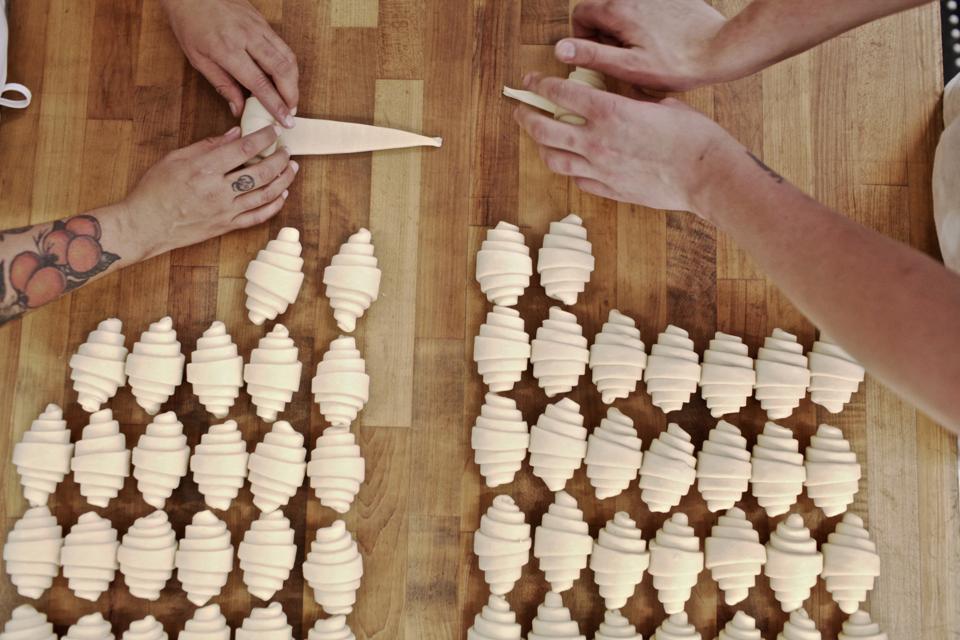 A new pay model took two years to create and test, but Caddel says it now has helped the business … [+] increase both profitability and employee wages.

Caddel started the business in 2014 at 23-years-old, after a childhood filled with seizures led to the diagnosis of a life-threatening brain tumor. But soon after opening his first location in San Francisco, tests showed his tumor wasn’t cancerous. The good news inspired the college dropout to dive even deeper into building his bakery chain. Within two years, Caddel had seven locations, including three franchises in South Korea.

But the quick growth came as California enacted several minimum wage increases annually, all while skilled employees became harder and harder to find. Profits were challenged further by these factors each year, he says. “While entire business models are losing solvency, somehow the talent you would hope to be surrounded by still can’t seem to afford their rent, let alone consider necessary things like a savings account or retirement plan. The rise in minimum wage and the exodus of talent has overwhelmed the food industry,” Caddel adds, “employer and employee alike.” He decided to focus on building the wholesale business and move into new international markets through franchise deals instead of adding retail locations in California.

Successfully tying compensation to performance output within a craft food environment is a holy grail of sorts within the food industry. Traditionally, food companies respond to rising wages and decreasing profits by mechanizing production or cutting corners, often by sourcing cheaper ingredients or using chemicals and food engineering to save money or production time. But that’s not allowed in an authentic gourmet operation. In this case, Mr. Holmes Bakehouses’ labor is mostly back in commercial kitchens, where the employees make pastries like croissant-muffin hybrids called cruffins that the bakery is known for. The best way for the company to make additional profits in this environment is to have the employees make those cruffins as quickly as possible. But they can’t be burnt or have their toppings askew. Quality must be maintained, while at the same time, there’s little incentive for employees to work at their personal best speed while clocking in at a uniform hourly rate. 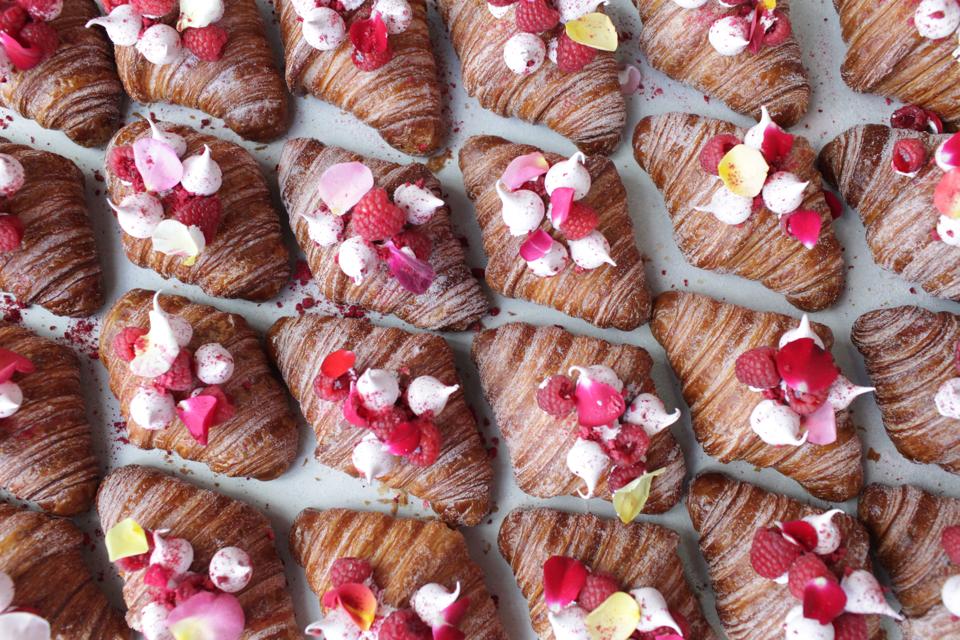 Under the new system, Caddel says that if employees can only maintain quality at slower paces or if they’re having a bad day and don’t want to race through their shift, then that’s fine—they’ll get paid at “a minimum output expectation.” Caddel explains further: “They are tested every 6 months, if they’d like to. It’s merely how we establish their expectations in the kitchen and they also need to accept the pay raise. If they are ‘Brioche III’ but are going into overtime to meet the output expectation, then they are held accountable to it. If it continues, then we allow them to choose between demotion or moving on.”

The system has led to a 50% increase in labor efficiency while the company has increased wages some 30%, becoming “one of the, if not the, highest paying bakeries” in each market it operates in, Caddel claims. “But perhaps larger than that, we have a scheme that substantiates a career in this industry while churning out unbeatable unit economics,” he adds. “The long-term result has been increased retention rates, piquing the interest of our industry’s top talent.”

Most Anticipated R&B Albums Of 2020: Normani, Rihanna And The Weeknd

Book Recommendations For New Year’s Resolutions: Our Reading List For Every Goal You Set

The New Way to Chat With Your Visitors

The Golden Rule Of Branding: Perspective Is Necessary