Breaking
Can Money Protect You From Covid-19? It May...
The Most Important Voice In Artificial Intelligence: Frontline...
Amazon’s Small Business Empowerment Team Is Helping Entrepreneurs...
10 Ways For Entrepreneurs To Power Through Tough...
Will The Cloud Take Down The Mainframe?
How Itamar Medical Stock Could Triple
How To Cash In On Biden’s Stimulus With...
The Refactoring X-Factor Behind Software Modernization
3 Habits Of Millionaires
Will The Stock Market Sell Off As Biden...
Microsoft Reverses Xbox Live Gold Price Increase Following...
Weekend Favs January 23
FDA Approves First Monthly Injections To Treat HIV
Low Volatility Investing Works In China Too
How 2020 Introduced Big Technology Startup Opportunities
Apple Loop: Stunning iPhone 13 Decision, Shock New...
Home Technology Have Scientists Cracked One Of The Biggest Mysteries Of Modern Physics?
Technology

Have Scientists Cracked One Of The Biggest Mysteries Of Modern Physics?

Antimatter sounds like science fiction, but it’s definitely science fact. But scientists are … [+] puzzled why we see none of it in the cosmos.

The answer to that question is an interesting one, which depends on how one understands the statistical analysis of complex experiments. The experimental result could be the early signs of something big, but it is also important to be appropriately cautious. So, what really happened? It starts with an announcement by a consortium of scientists of the outcome of a study of subatomic particles called neutrinos that could be huge – perhaps huge enough to answer the quasi-philosophical question “Why is there something, instead of nothing?” However, to understand the study’s significance and potential impact requires a little back story.

Einstein’s most famous equation is E = mc2, which is usually interpreted as saying that energy can be converted into matter and vice versa. The reality is somewhat more subtle, as it actually says that energy can be converted into matter and antimatter in equal quantities. Antimatter is an antagonistic cousin of matter which, when combined with an equal amount of matter, can release an enormous amount of energy. Antimatter played a prominent role in Dan Brown’s book Angels and Demons, in which a quarter gram of antimatter threatened the Vatican. Antimatter was proposed in 1929 and discovered in 1931.

So where did the antimatter go?

This question is one of the biggest mysteries of modern science, and the answer is unknown. Something happened in the earliest moments of the universe to make the antimatter disappear. From our best current measurements of the primordial radiation of the Big Bang (called the cosmic microwave background radiation, or CMB), something tilted the scales in favor of matter, with the ratio of for every three billion antimatter particles, there were three billion and one matter particles. The two sets of three billions cancelled and made the CMB, and the remaining tiny amount of matter went on to form the stars and galaxies that we see in our telescopes today. For this to happen, some physical process had to favor matter over antimatter.

While Einstein’s theory says that matter and antimatter should exist in exactly equal quantities, in 1964, researchers found that a class of subatomic particles called quarks slightly favor matter over antimatter. Quarks are found inside the protons and neutrons at the center of atoms. While this was an important observation, the differences between matter and antimatter quarks were too small to explain the dominance of matter we see in the universe.

Scientists then proposed that perhaps the origin of the imbalance was due to a class of particles called leptons, of which the electron is the most familiar example. The matter and antimatter asymmetry of leptons had not been completely investigated, most importantly in the behavior of another type of lepton called neutrinos.

Neutrinos are subatomic particles that interact with matter so weakly that they can pass through most matter without interacting. Because of this, they are called ghosts of the subatomic world. Neutrinos are made most copiously in nuclear reactors and the biggest nuclear reactor around is the Sun. Neutrinos from the Sun can pass through the entire Earth with essentially none of them interacting. There are three types of neutrinos, called electron-type, muon-type, and tau-type.

The T2K experiment shoots a beam of neutrinos from J-PARC in Tokai to the Super-Kamiokande … [+] Experiment in Kamioka. (Distances in meters.)

Neutrinos also experience a very weird behavior – they can spontaneously change their identity. Thus, a muon-type neutrino can “morph” into an electron-type and then on to a tau-type and back to a muon-type. This cyclical morphing is called neutrino oscillation, and it was definitively discovered in 1998. 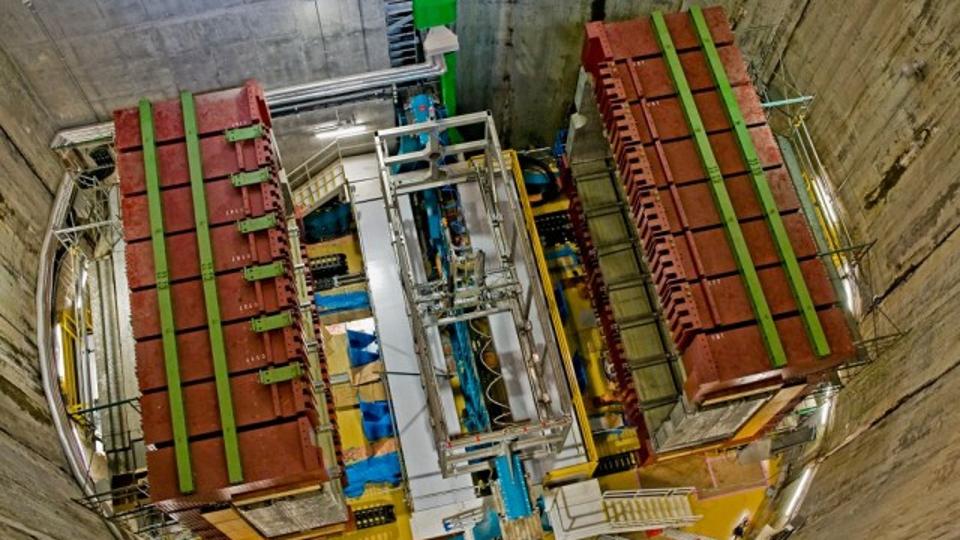 This detector is located near the particle accelerator that makes a neutrino beam.

Scientists use an accelerator facility in Tokai, Japan to shoot a beam of muon neutrinos through the Earth to a huge detector in Kamioka. The experiment is called T2K (for Tokai to Kamioka). The T2K experiment announced strong preliminary, but not definitive, evidence that neutrinos and antimatter neutrinos oscillate differently. The strength of the signal is what scientists call “three sigma,” which is sufficient to claim that they have evidence to see something, but not strong enough to claim discovery. That standard is called “five sigma.”

So, what’s next? Well T2K will continue to take data, with the goal of achieving the elusive five sigma. Moreover, there are other operating neutrino facilities. At Fermilab, America’s leading particle physics laboratory, an experiment called NOvA is also investigating the oscillation properties of neutrinos and antimatter neutrinos. These two facilities, while being competitors in a sense, are exploring how they might combine their data in an attempt to pass the five sigma threshold.

However, Fermilab is building a sophisticated new neutrino particle beam experiment called DUNE (Deep Underground Neutrino Experiment). DUNE will be able to study both matter and antimatter neutrino oscillation in much higher detail than existing experiments. DUNE will begin operations sometime in the late 2020s.

It’s premature to say that the T2K experiment has demonstrated differences in the oscillation behavior of matter and antimatter neutrinos, but the possibility is both plausible and very exciting. The cause of the observed dominance of matter in the universe is a pressing mystery and, in the next few years, we may finally understand it. Certainly, this recent paper gives scientists reason to think that they are looking in the right direction.