Breaking
How To Delegate Effectively
Stock Market: Two New Trends Shaping Next Buying...
Apple iOS 14.0.1 Release: Should You Upgrade?
Social Media Marketing Consulting
What You Need To Know About Your Startup...
Governor Signs Landmark Student Loan Borrower Protection Bill...
Reddit Co-Founder Alexis Ohanian Plans $150 Million Investment...
This Week In XR: Enterprise Adoption And Financing...
The Disadvantages Of Aging In Place
How Advances In Customer Service Can Take Telehealth...
5 Reasons Why Your Startup Needs To Be...
Beyond-Professional: What Is The New Workplace Normal?
Manufacturing In The U.S. Is On The Cusp...
After 75% Rally, Johnson Controls Stock Looks Fully...
The Future Is Now: This Start-Up Offers Carbon-Free...
Eight Boxes To Check If You Want To...
Home Technology Have Your Science And Eat It: Scientific Research As Cakes
Technology

Have Your Science And Eat It: Scientific Research As Cakes

Before she became a sous-chef at McMurdo research station in Antarctica, Rose McAdoo was a pastry chef in New York City. But even on the other side of the world, surrounded by polar research staff, she couldn’t stop thinking about cake.

During the summer season, more than a thousand people work at McMurdo. They’re not all scientists. The majority of residents at the station are there in support roles, to keep the place running like a little village. But the research is never far away, and while working in the 24-hour kitchen, McAdoo learned about the scientific studies happening around her. 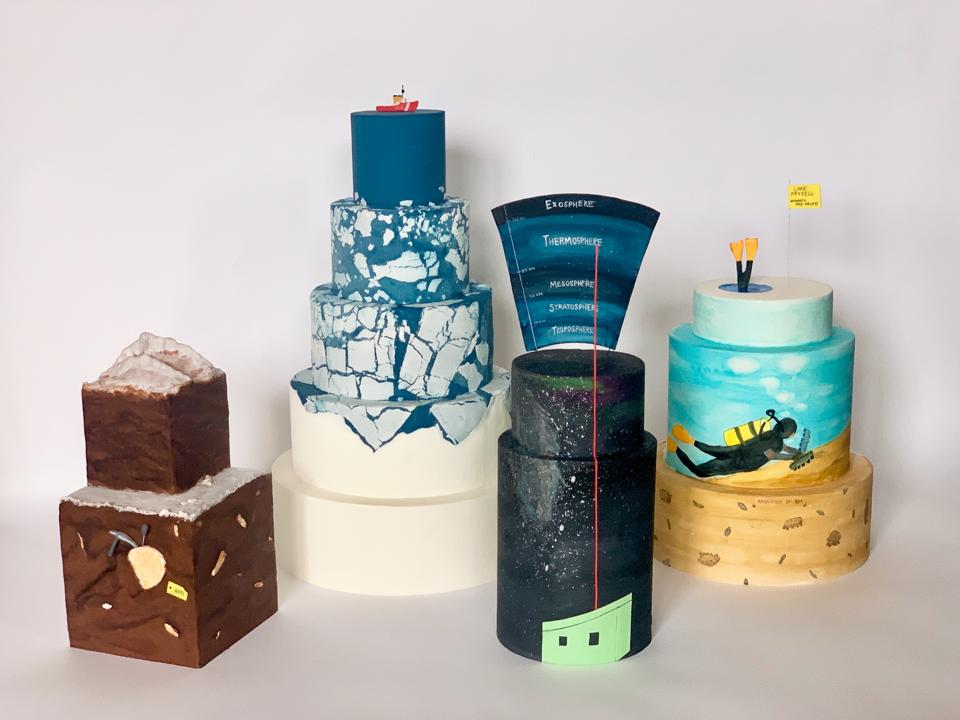 Four of the science-themed cakes that pastry chef Rose McAdoo created after spending several months … [+] working at McMurdo research station in Antarctica. From left to right, the cakes represent a paleontological dig in Antarctica’s Dry Valleys, a polar icebreaker clearing the way for a resupply ship to reach the research station, LIDAR laser research studying the Earth’s atmosphere from the 24-hour darkness of Antarctic winters, and Dr. Shawn Devlin collecting sediment samples under the ice of Lake Fryxell.

There was no opportunity to put these elaborate cake ideas into practice right away, but as soon as she left Antarctica during the off-season, McAdoo started work on the cakes. She stayed in touch with some of the researchers she met, who provided feedback and resources to help her get the science just right.

McAdoo’s creations demonstrate the wide variety of research that takes place at McMurdo: Ice core samples that hold the key to historic environmental conditions, sea spiders living in freezing cold water, astronomical observations, paleontological digs. One glimpse at the cakes immediately tells you that Antarctic research is about much more than penguins. 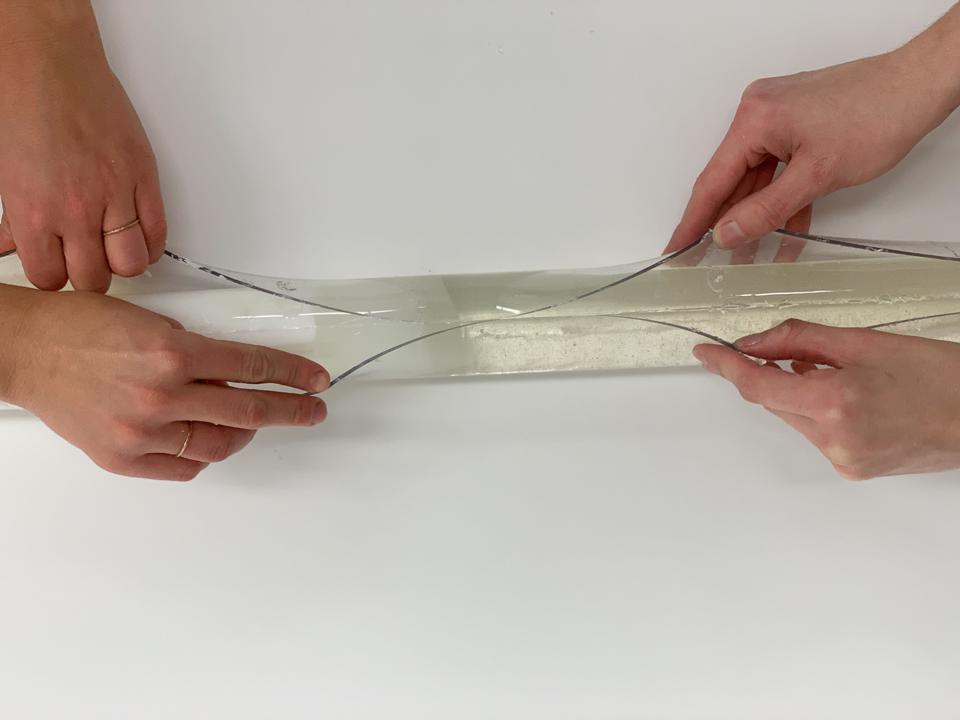 Unmolding of an ice core sample created out of isomalt. This project was a collaboration between … [+] Rose McAdoo and Chelsea Burgess.

But you don’t have to be an experienced pastry chef to make a science cake. Several scientists are making their own research or that of their colleagues deliciously edible.

Last year, physicist Katharine Leney made a cake to celebrate a successful year for the ATLAS experiment she was involved with at CERN. ATLAS is a detector at the Large Hadron Collider that measures a range of different signals. It was one of the detectors that spotted the Higgs Boson a few years ago, for example. Leney’s cake features edible replicas of some of the graphs describing the results of ATLAS’s work throughout 2018. This year, a similar cake even included a replica muon detector. 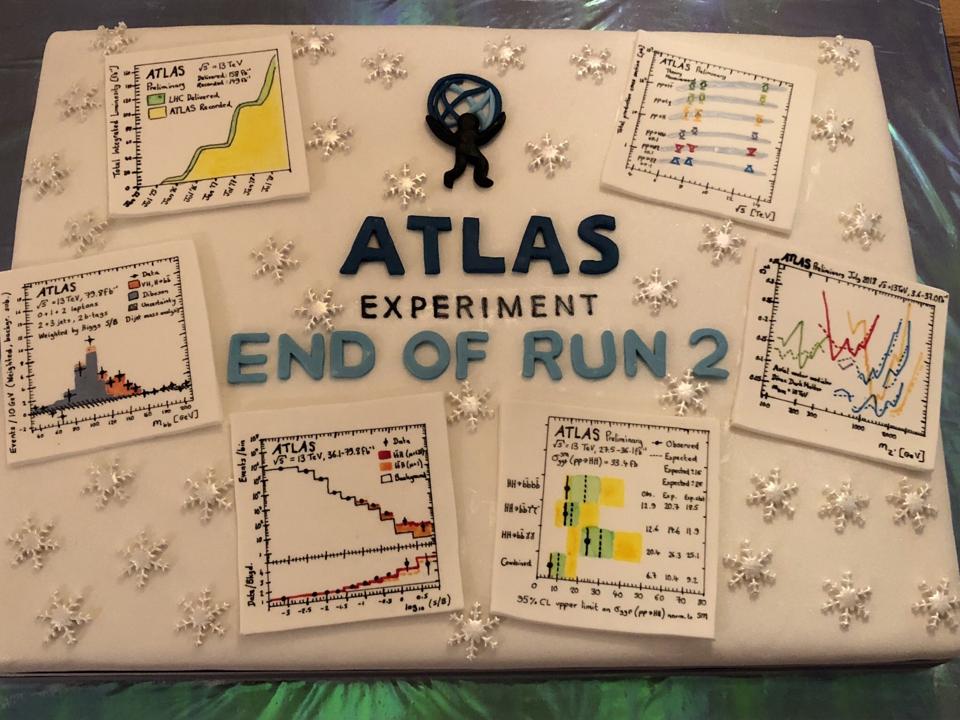 Katharine Leney created this cake to mark the end of run 2 of the ATLAS experiment at CERN, in late … [+] 2018.

These are not the only cakes Leney has made at CERN. Together with colleague Katy Grimm she has turned cake making into a way to introduce people to new scientific concepts. Their outreach project Physics Cakes shares many of the cakes on Twitter.

Biologist Luísa Jabbur makes science cakes for the birthdays of her coworkers. This summer, she created this tiered cake with a phylogenetic tree — a diagram that shows how closely related different species are to each other. On Jabbur’s cake, the tree almost resembles a real tree, with the birds sitting on the branches. 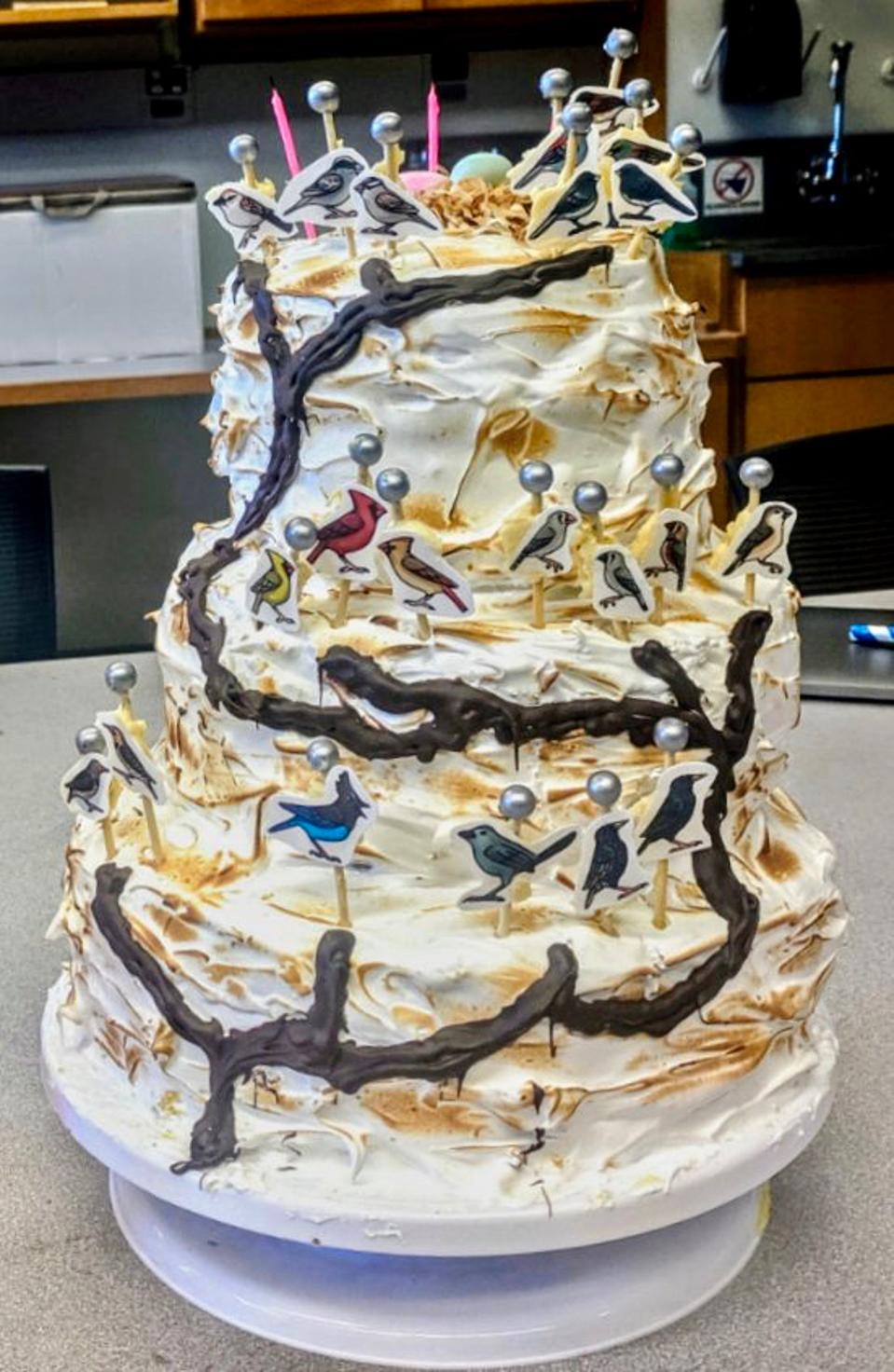 Luísa Jabbur’s bird phylogeny cake shows how different bird species are related to each other.

Five years ago, ecologists Carly Ziter and Rose Graves baked a forest fire cake to celebrate the successful PhD defence of forest ecologist Brian J Harvey at the University of Wisconsin Madison. The most striking feature of the cake are the large flames made of melted hard candies, which engulf a wafer roll forest. 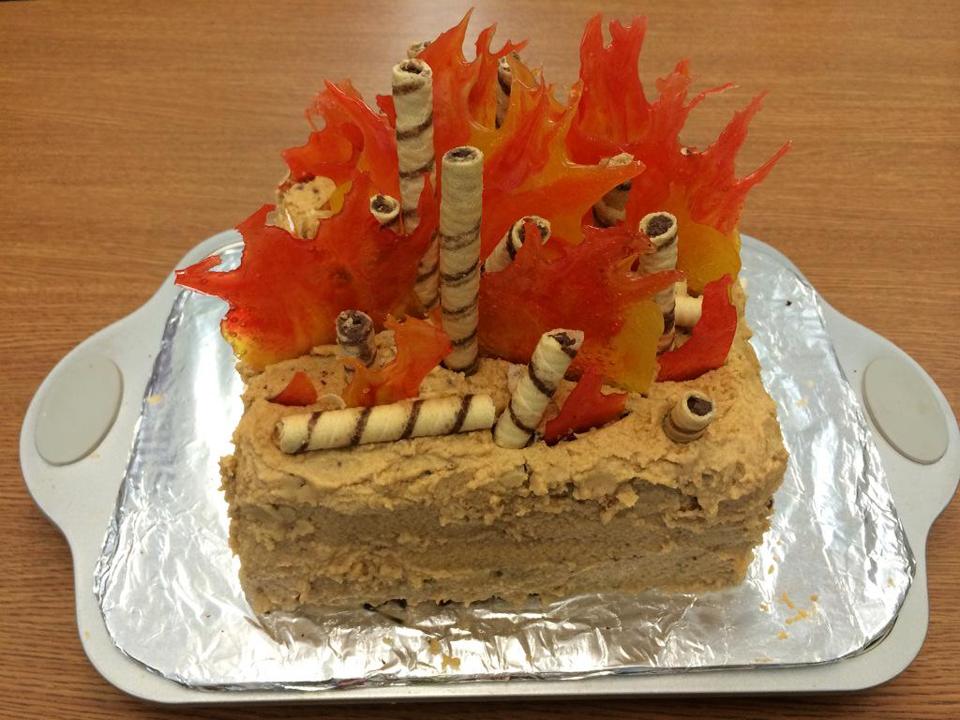 Cookies are another popular medium for science bakers. Crystal Lantz (@BoozyBrain on Twitter) even designed and 3D-printed her own neuroscience-themed cookie cutters to make it easier to create cookies in the shape of neurons, mouse brains or fruit flies (which are often studied in neuroscience labs). 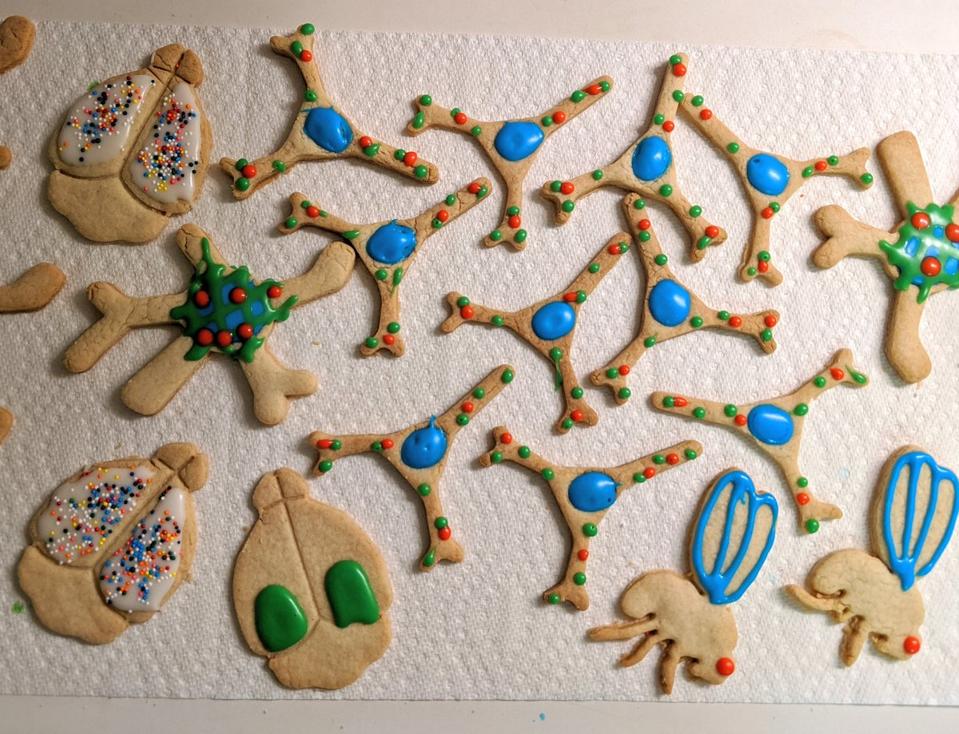 And what about a gingerbread lab bench? A few years ago, microbiologist and science communicator Anne A. Madden (@AnneAMadden) deviated from the traditional gingerbread house blueprint and created a lab bench with edible lab equipment. This year, she built a new bench to help lab supply company Thermo Fisher run a gingerbread lab bench competition, in which even more scientists were encouraged to get creative and scientific in their kitchen. 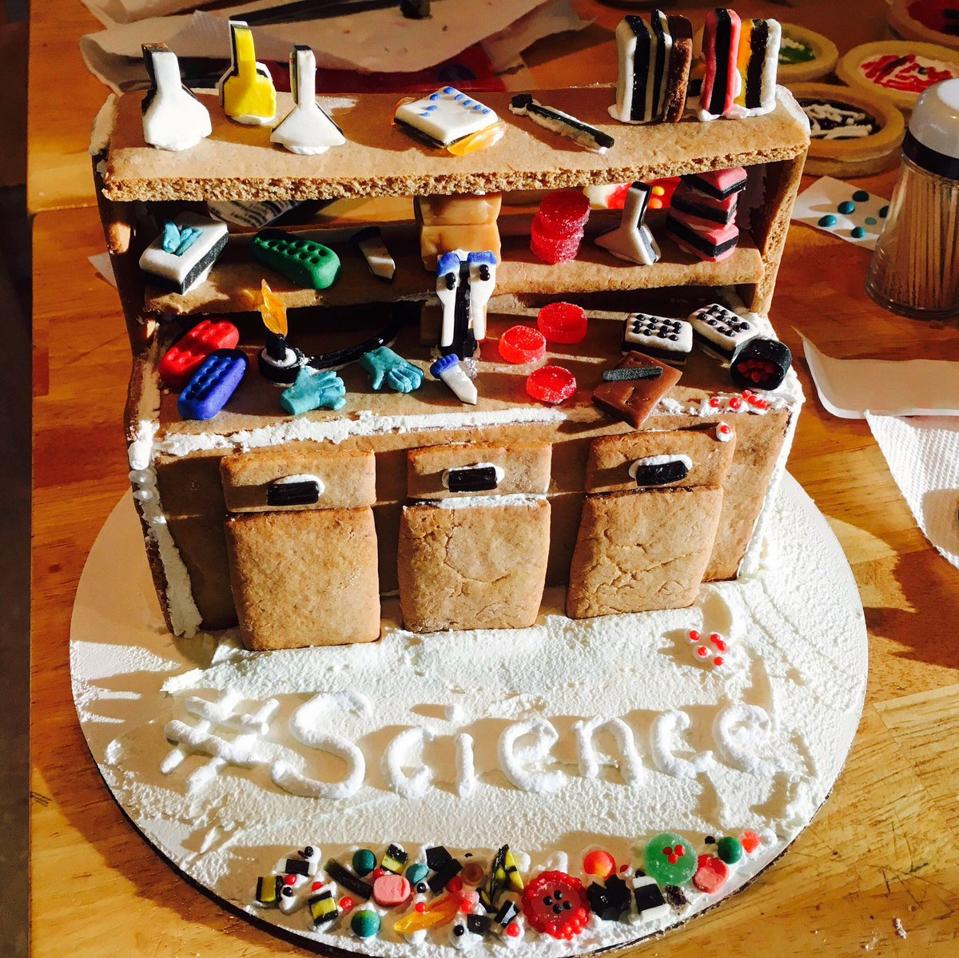 Anne A. Madden created this lab bench out of gingerbread, complete with confectionary lab equipment.

The challenge of making science cake or cookies is to get the core concept of the research across in a medium that doesn’t lend itself to a lot of details. Usually, scientific information comes with a lot of caveats and footnotes, graphs, figures, and subtle explanations. On a cake or cookie, you’re limited by what fits on a cake, and by what you can express in icing and decorations.

At the moment, Rose McAdoo is back in Antarctica. She’s working as sous-chef for NASA’s long-duration balloon atmospheric research camp, but she has also found some time for her next science baking project.

“I’m currently building a large sugar art piece for the McMurdo Alternative Arts Gallery (taking place in our fuels barn on December 30), which will be a 3D replica of a galaxy star-origin thermal map from a NASA-funded research team here.”

Are Entrepreneurs Born Or Made? -An Insurtech Venture Makes The Case For Startup Studios

Walmart’s Bet On Supercenters Is Brilliant For 3 Big Reasons