Breaking
How To Get Your Startup Business Off The...
How To Create A COVID Safe Construction Site
How to Make a Good First Impression at...
How To Retain Your First Startup Product Users
China Shipments To The U.S. Are 7 Times...
Reviewing ‘The iPhone Of Air Conditioners’
The 8 Best CRO Companies of 2020
AARP BrandVoice: The Doctor Will See You Now,...
ThoughtSpot’s New Cloud-Based Tool Aims At Boosting Growth...
10 Ways Service-Based Businesses Can Generate Positive Word-Of-Mouth...
A Customer-Centric Culture Starts By Embracing This One...
Report: Struggling Black-Owned Businesses Need More Government Grants
Why The Fed’s Outlook Paints A Sobering Picture...
As The End Of 2020 Approaches, The Cybersecurity...
Do Businesses Have A Role In Solving Poverty...
Young And Powerful: She The Change
Want To Attract (And Keep) The Right Clients?...
Best Legal Practices For Reopening Sports Venues During...
Why Now Is A Good Time To Start...
Home Technology Hearings Continue In Case Of Wealthy Robotics Founder Sued By His Wife For ‘Indefensible’ Sale Price Of His Startup
Technology 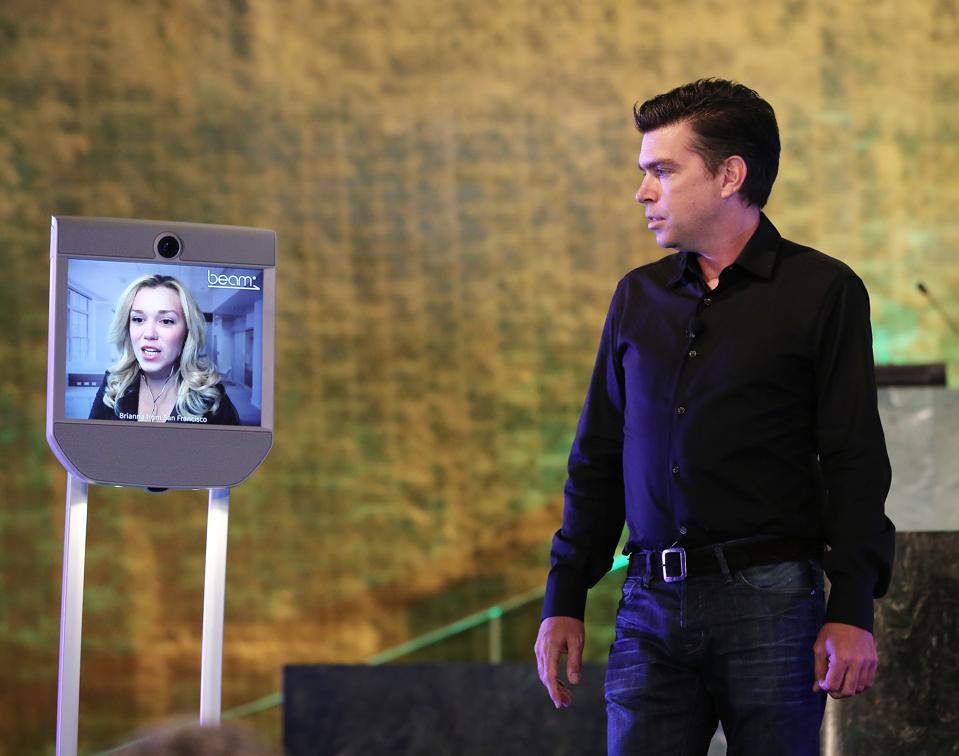 Scott Hassan, CEO and founder of Suitable Technologies, speaks with a colleague on a Beam device

A robotics founder credited with writing part of Google’s original code is being sued by his wife for attempting to sell off his robotics startup in an alleged “tainted, self-dealing transaction,” amidst the duo’s on-going, nearly five-year divorce proceedings.

Plaintiff Allison Huynh alleges in a complaint filed in Delaware that her husband, Scott Hassan, agreed to sell the assets of his company, Suitable Technologies, to Denmark-based Blue Ocean at the “indefensible” price of $400,000, described by Huynh as an “infinitesimal fraction” of their value. The complaint declares that Suitable’s patent portfolio, hard assets, and licensing potential should instead “obtain a value in the tens, if not hundreds, of millions of dollars.”

Suitable’s flagship product, a telepresence robot called Beam, has been used by the likes of Edward Snowden and Barack Obama for dynamic video-conferencing — think of the device like an iPad on wheels that lets the controller move through a space as if they were there. Suitable and Blue Ocean announced the sale in August 2019, but Huynh is seeking an injunction to stop the deal, with a hearing scheduled to take place on Friday, December 13 in the Court of Chancery of the State of Delaware.

It’s unclear how many Beam robots Suitable has sold to date and revenues for the company are not publicly disclosed.

The highly-redacted complaint and Huynh’s opening briefing run through a slew of issues with the deal process, including allegations that Hassan failed to professionally value the company’s assets, tried to “gift” the company to Blue Ocean, only gave a Suitable executive three months to find an offer, and rejected better offers, including one from a company in which Huynh is a minority interest-holder, “in favor of his personal proclivities.”

The briefing also alleges that Hassan wanted to “manufacture a tax event” through Suitable’s sale, and that he rejected other offers for a “$30 million personal windfall,” though the relevant sections are largely redacted.

“Simply put, Mr. Hassan willfully ignored his fiduciary duties in favor of what can only be described as a ’sweetheart deal’ with Blue Ocean solely motivated to enrich himself,” the lawsuit alleges.

The couple began legal divorce proceedings in California in 2015, which are still not resolved, and the suit alleges that Huynh co-owns at least 600,000 shares of Suitable common stock as “community property” with Mr. Hassan, making her eligible to sue as a shareholder. The suit essentially argues that the company is worth more than Hassan has agreed to sell it for and that shareholders deserve to see a higher value fetched for their shares.

While Friday’s Delaware hearing pertains to a possible breach of fiduciary duty for the deal, it’s also tied up with the divorce proceedings through California court family law.

A “Brilliant Inventor” And “Inept CEO”

Hassan met Google cofounders Larry Page and Sergey Brin at Stanford and programmed much of the original search engine that ultimately became Google. He then reportedly invested $800 in the company 12 days after Page and Brin officially formed it 1998. Instead of joining as an early employee, though, he founded an email list-service startup called eGroups.com that Yahoo bought for about $432 million in stock in 2002.

Following that windfall he bought office space in Menlo Park, which became the home base for his next venture: robotics incubator Willow Garage. That company, known as a robotics pioneer, spawned an open source robotics operating system, a line of giant robots dubbed the PR2s, and a host of spin-off startups, including Suitable. Hassan has said he poured about $80 million into Willow Garage before shutting it down in 2013 to focus on Suitable. Former employees, crushed at the turn of events, have said that they attempted to “keep [Willow] alive” after Hassan decided to pull out, but that their attempt would have required Hassan to sell part of his ownership, which he didn’t want to do.

Hassan as invested a similarly large amount of his own funds into Suitable, according to the complaint: $93 million in total.

Huynh’s complaint alleges that Hassan is a “brilliant inventor” but an “inept CEO” who ultimately let Suitable languish before deciding to “wind down” the company late last year.

“Despite Suitable’s rapid growth, impressive technology, and extraordinary value if properly exploited, Mr. Hassan, in late 2018, suddenly made an about-face regarding Suitable’s future,” the complaint says.

Two former Suitable employees, who asked to remain anonymous, told Forbes that Hassan stopped showing up at the office as his divorce proceedings dragged on.

Huynh, too, has her own tech chops. She founded a gaming company called MyDream Interactive and worked with Hassan on an early 2012 investment in Magic Leap, the augmented reality startup that later drew immense hype and a sky-high valuation (though it has been struggling with sales and direction as of late).

While Hassan has been described by several media outlets as a billionaire thanks to his early Google stake, real estate holdings, and other investments, Forbes does not list him in our billionaire ranking.

Hassan’s lawyers didn’t respond to requests for comment ahead of Friday’s hearing. A Blue Ocean spokesperson said that the company is under a confidentiality agreement but that its asset purchase agreement is “subject to court approval” and that the ongoing court proceedings in Delaware are “part of that process.”