Breaking
How To Get Your Startup Business Off The...
How To Create A COVID Safe Construction Site
How to Make a Good First Impression at...
Covid-19 Death Toll In U.S. Passes 200,000
5 Decisions That Will Increase Your Chances Of...
Coronavirus Is Shaping Up To Be Very Bad...
Is It Time For A Bank For Women?
As Israel Locks Down, Its Health Tech Sector...
Buying The Bulge Is Dangerous
5 Strange Things Happening Right Now In The...
The Best Blogging Platforms (In-Depth Review)
How Will The Coronavirus Impact Your Finances?
How Xbox Series X Will Attempt To Avoid...
Virgin Orbit Seeking Over $100 Million As ‘Jaw...
How To Develop The Confidence To Launch A...
USPS Covid-19 Coronavirus Plan To Send Every Household...
Android Circuit: Mysterious Samsung Galaxy, Google’s Next Pixel...
Snowflake: Valuable Lessons For Entrepreneurs
After Man Shoots Fiancee’s Parents, Bloody Footprints Lead...
Home Technology Here Are The Quest Steps To Get Destiny 2’s Ruinous Effigy Exotic And Its Catalyst
Technology 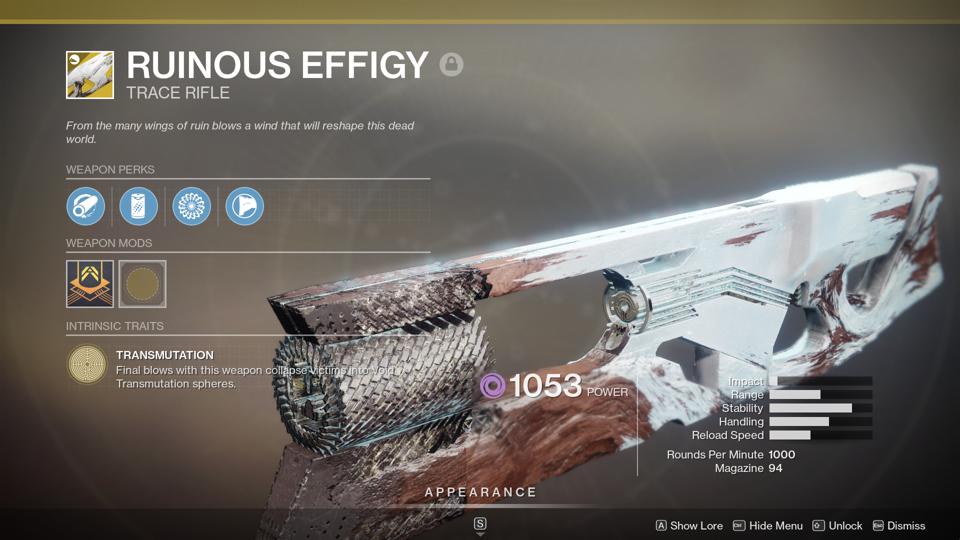 I told you this was going to be a busy day in Destiny 2, and sure enough, here I am at 6 PM writing my uh (checks page) third Destiny article of the day. Two different exotic quests launched today, one is timegated, the Traveler’s Judgement one tied to the Evacuation quest, the other is not, and that’s tied to Ruinous Effigy, a wild new trace rifle slash dunking machine. You’ll see.

It’s a decently lengthy quest, especially when you add the already-available catalyst onto it, but yes, it can all be done in a day, and really, in a couple of hours if you save yourself some time.

You need to pick up the quest from the Umbral Decoder thing on the wall where you’re normally get your Interference quest. Then you have to complete the Interference quest like you normally would. It’s not different, other than the end where Zavala shows up to chat.

You need to collect 25 pieces of calcified light across Mars, Io, Titan and Mercury, the Pyramid-invaded planets. This sounds harder than it is. If you pull up your ghost on any main patrol zone, you will be able to see white diamonds showing you where each of them are on the map. Some are a bit tricky to get to, but others are not.

There are 10 on Io and 5 on Mars, Titan and Mercury. They are only in patrol zones, not in off-central locations or lost sectors. If you’ve missed any, go ride around some of the larger zones with your sparrow, as if you’re past 150-200 meters or so, your Ghost won’t show them.

Also in this step, you need to kill 15 of Savathun’s Marionettes. If you’re like me you might be worried you have to do 15 Contact events, but you don’t. Rather on Io and in the Titan zone that does not have the main Contact event, there are mini versions of each of the Contact bosses that spawn every few minutes or so. Those bosses will always spawn at least 1 Marionette and you can’t finish the encounter without killing it, so it’s hard to miss. This is just a lot of riding around looking for these Taken events and took a fair bit of time. The events do spawn back to back, and in “enemy is moving against each other” events one Marionette also usually shows up too. 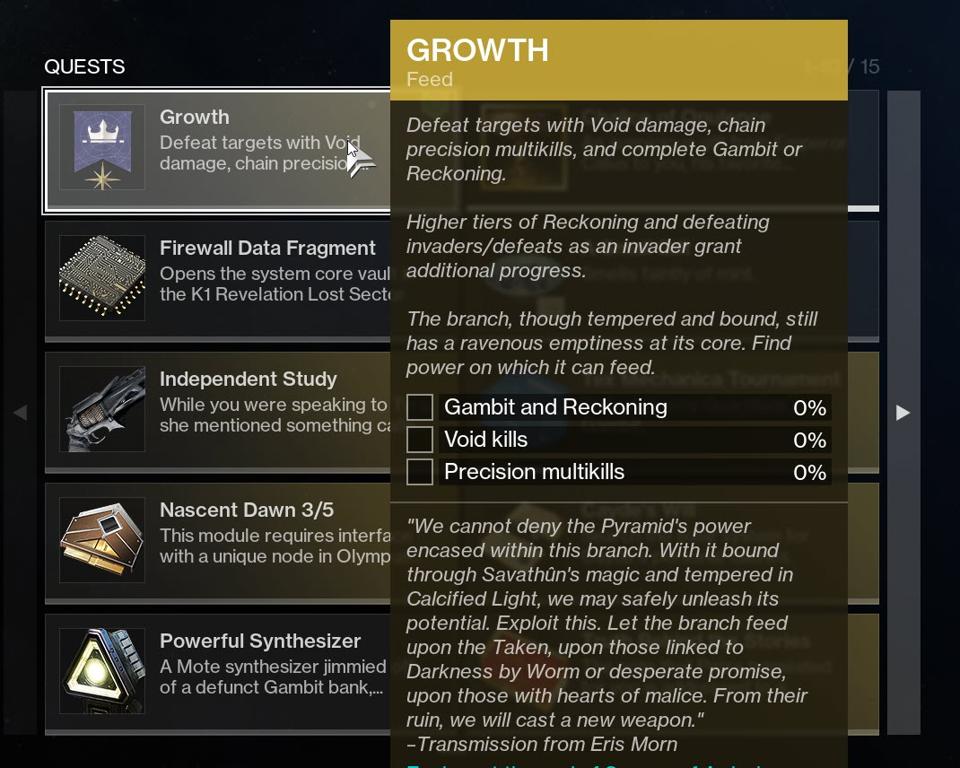 You need to do either Gambit or Reckoning for this. You can complete the first part of this with three, Tier 3 Reckoning completions or 10 failures (don’t ask). Not sure about Gambit, but guessing 3-5 matches.

You need to get kills with Void damage, any Void damage, not just abilities. Graviton Lance works wonders here, which let me still use Well for Bridge of Folly on my Warlock.

You need to get “precision killstreaks” which is sort of annoying and took the longest to complete, but grab your favorite bow or hand cannon and get going. I just did it with Graviton Lance, but the splash damage on that probably made it take longer than it needed to. Now you’re done and you can claim Ruinous Effigy from the recaster back in the Tower.

So, this gun is wild. If you kill an enemy with the trace beam, it will drop an orb that you can dunk in an AOE damage effect that will blow up other enemies. The first time you do that to an enemy, you should get the catalyst to drop.

Here’s where things get interesting. You can complete the catalyst with something insane like 5,000 kills, or you hunt down those weird orbs you have seen all over the map, Eyes of Savathun, that can only be destroyed with the Ruinous Effigy. There are 50. I am not going to tell you where all of them are. I will let Houndish do that in the video below. Thanks Houndish.

Early reviews are in and people seem to love the gun and it’s truly goofy exotic perk that is hilarious and fun to use. Thanks Pyramids, we really like your gun. Give us more please. What have you given us lately Traveler? Oh wait, Traveler’s Judgement, hmm. Well, we don’t have that yet.

See you out there, hunting eyes.