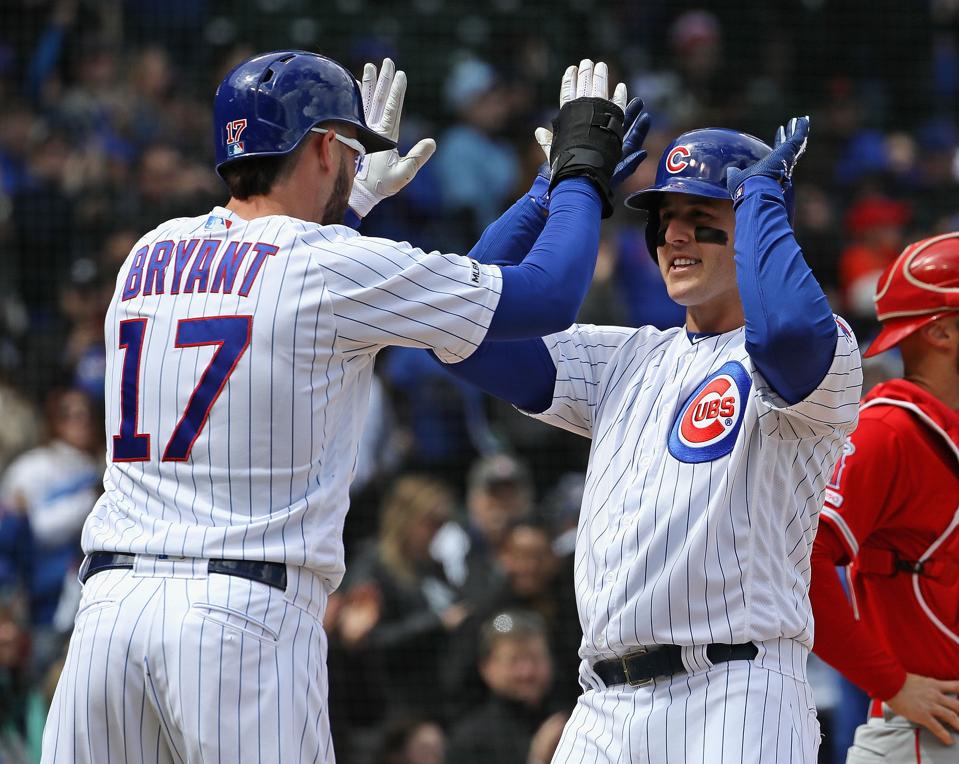 At the beginning of the 2010 decade, the Cubs were a losing team searching for an identity and in the early stages of a franchise rebuild. The last five years of that 10-year span were exciting seasons in which the Cubs were contenders every year and ended their 71-year pennant drought and 108-year stretch without a World Series title when they captured the 2016 Fall Classic championship.

There are many great players who had a hand in the Cubs winning over the last five years and many who had good years during the 2010s. Here is a selection of the Cubs All-Decade Team for the 2010s.

Anthony Rizzo played in eight of the 10 years with the Cubs during the decade after he came over in a trade with the San Diego Padres. The big, left-handed hitter is an easy selection at the position since he is the heart and soul of the Cubs and has produced with his glove, bat, and personality in the clubhouse and on the field.

During his eight years with Wrigley Field as his home, Rizzo has produced five seasons with 94 or more RBIs—including four 100-RBI campaigns, four 30-homer seasons, and five years with 89 or more runs scored.

Defensively he’s become one of the top fielding first basemen in the game and collected three Gold Glove Awards in the last four years. Back issues have sidelined him on occasion, but Rizzo is in the lineup everyday—playing in 1,071 of the 1,134 games played since 2013.

“Riz plays every day and never complains,” said former manager Joe Maddon. “He loves this game and he’ll do whatever you ask to win. He’s a great fielder, hitter, and a good base runner. . . he doesn’t get enough credit for his base running. He’s very instinctive. He’s improved in every aspect of his game and is a complete player.”

The Cubs used several players to man the second base position since 2010 with Ryan Theriot, Darwin Barney, Addison Russell, Javier Baez, and Ben Zobrist among others . . . but Zobrist helped the team flourish in the postseason.

He was also a veteran leader for many young players and was instrumental in guiding the Cubs to a World Series title, capturing MVP honors in the 2016 Fall Classic when he collected 10 hits and batted .357 in the seven-game Series against the Cleveland Indians.

Could there be any other selection other than Kris Bryant? The moment Bryant became a regular in the lineup, the Cubs offense changed. When he gets hot with the bat, the team plays on another level from the offensive side of the game.

“Kris has great instincts,” said Maddon. “He reads the ball so well off the bat when he’s running the bases and his speed is deceiving. He’s quick and very fast. He moves well on the bases.”

Since three players come to mind for the position over the last 10 years—Starlin Castro, Addison Russell, and Javier Baez—this could have been a tough decision to make. But Castro, who played more games at shortstop (844) than Russell and Baez combined, manned the position during the losing years and with erratic defensive play.

Russell was the shortstop during the World Series season, but personal troubles and inconsistent play killed his chances at being a long-time fixture at the position.

Baez is clearly the best of the three both with the glove and the bat. Since taking over as the everyday shortstop, he has put up MVP numbers offensively. Defensively he’s one of the best in the N.L. —covering a wide range of ground and making spectacular plays. Once he becomes more consistent and doesn’t rush on routine plays, he will be included in talks for Gold Glove honors.

This outfield corner spot came down to two players—one at the beginning of the decade, Alfonso Soriano, and one at the end, Kyle Schwarber. Both are slugging offensive minded players who struggle with the defensive side of the game. Schwarber and Soriano were better defensively than they have been given credit for, but they are by no standard elite with the glove.

Schwarber’s value is still rising and at age 26, his best years are ahead of him. So, I’ll choose Schwarber as the left fielder of the decade by a narrow margin over Soriano.

Albert Almora has had the opportunity to take this spot, but having to fill the shoes of Dexter Fowler is tough since Fowler was the Cubs center fielder during the team’s best two years of the decade and they were the finest two years of his career.

When Fowler left after the World Series title season, the Cubs have struggled not only to have a quality all-around center fielder defend the outfield, but have yet to find a leadoff hitter who can be placed in that batting slot every day.

Fowler was not a Gold Glove defender and didn’t have a strong arm, but by no means was he not valuable with the glove. He covered a lot of ground and helped defend the corner outfielders, who played left or right field and were not particularly graceful patrolling their position.

If the Cubs had kept Fowler, it’s more than likely the team would have been better equipped to defend their World Series title that he helped them capture.

Some may disagree, but Jason Heyward is an easy choice for this position. He certainly is the best defensive right fielder the Cubs have had during the last 10 years and his leadership comes from playing the game the right way.

Heyward cashed in on a big contract (eight-years for $184 million) and fans expected big offensive contributions that never appeared in the stat sheets. But Heyward has always been a big contributor to the Cubs’ winning ways since he’s been in Chicago as the everyday right fielder at Wrigley. He’s won Gold Glove awards and has kept base runners at bay with his ability to throw the ball with velocity and accuracy to any base.

Heyward’s paycheck speaks louder than his offensive stat sheet, but he still has produced and played outstanding defense which makes him the best of the decade in right field for the Cubs.

The Cubs don’t win the 2016 World Series without catchers Miguel Montero, David Ross, and Willson Contreras. Montero came through in high leverage situations with key game-winning hits. Ross was outstanding both offensively and defensively in his limited work and was a leader on the bench, in the clubhouse, and on the field. Without his leadership the team could have been dragged in a different direction.

Contreras has better tools than most players gearing up to catch behind the plate. His offensive numbers outshine any other catcher in the decade and his throwing ability is unchallenged. But his pitch-framing, pitch blocking, and on-field decisions as a catcher could use more experience and improvement.

So, as the Cubs move into the 2020s with Ross as their manager and Contreras penciled in at the moment as their backstop, we’ll choose two catchers for our 2010s All-Decade team . . . using Contreras as our top guy with all the tools to be a regular All-Star, and Ross as his tutor to help keep his edge and his ability to perform at an elite level at the game’s most demanding position.

For this All-Decade team we’ll choose the top two starters for the Cubs over the last ten years, a middle reliever and one closer.

Arrieta pitched four and a half seasons with the Cubs after coming over in a deal with the Baltimore Orioles in 2013. During his time in Chicago, Arrieta went 68-31 with a 2.73 ERA in 803 innings over 128 starts.

His magical year came in 2015 when he was the Cy Young Award recipient, Arrieta dominated the league going 22-6 with a 1.77 ERA in 229 innings and leading the league in complete games (4) and shutouts (3). He totaled 236 strikeouts and tossed the first of his two no-hitters while with the Cubs.

Left-hander Jon Lester is the other easy choice as the All-Decade team’s starting pitcher since he will go down as the greatest free-agent signing in club history.

He’s been a leader and a consistent performer on the mound and has been the most valuable postseason pitcher the Cubs had during their run of four straight playoff campaigns. He earned NLCS MVP honors in 2016 and during his 10 postseason starts with the Cubs, he is 3-3 with a 2.67 ERA and 60 strikeouts in 64 innings pitched.

Lester has been the most reliable starter the Cubs have had when a victory was needed.

The middle reliever is Pedro Strop. Many fans will chuckle since Strop has been inconsistent at times and has been battling injury the last couple of years, but as a Cub, he has a 2.90 ERA in 373 innings pitched with 425 strikeouts and a team-leading 120 holds over the last six-plus seasons . . . throw in 30 saves during that time frame and you see Strop is the top middle reliever of the decade.

The closer is a tough call because that has been a challenging role for the Cubs to fill on a consistent basis. Since 2010, the team has employed several relievers to be that main shutdown guy including Carlos Marmol, Kevin Gregg, Hector Rondon, Aroldis Chapman, Wade Davis, Brandon Morrow, Strop, and Craig Kimbrel.

The logical and fair choice would be a reliever who spent more than one year with the team which eliminates Gregg, Chapman, Davis, Morrow, and Kimbrel.

Strop is our middle reliever, so he’s out as the closer. Leaving Marmol and Rondon. Both are similar in having electric stuff, but often found trouble with their command.

Marmol saved 94 games during the decade, but blew a whopping 21. His control and inconsistency damaged his career and he never pitched another major league game after age 31 in 2014.

Since Rondon was a valuable asset during a couple of winning seasons for the Cubs and posted a remarkable year in 2015 with a 6-4 record, 30 saves in 34 opportunities and a 1.67 ERA, we’ll give the nod to Rondon as the Cubs closer of the decade.

So, there you have it—the 2010s Cubs All-Decade Team  . . . it may not be perfect, but no team ever is and opinions will vary at some select positions. But for the most part, these men all contributed to a winning decade and some postseason glory.

Executive Presence: 8 Warning Signs That You Don’t Have It

Tax Court Rescues Taxpayer From The Agent From Hell

For $30 Million, The Los Angeles Mansion That...

5 Tips for Keeping Your Loved Ones Safe...