Breaking
Microsoft Teams Issues Strike To Zoom With Tidal...
What’s Coming For The S&P 500 In October
Zooming In – Should SMEs Invest In The...
iOS 14: The Surprising Security Risk Of Sharing...
How A Break From Lord Sugar Changed The...
Sunday’s Google Doodle Is Actually About Google
Office Of The Comptroller Of The Currency Chief...
Source Code For Multiple Windows Operating Systems Publicly...
Why Forgettable Pfizer Really Is A Great Value...
Hot For The Holidays? Amazon Home Drone, Kid...
Best Small Business Loans
The FAAMG Stocks Drive The Markets
Channel Arbitrage And Other Ways Fintech Is Disrupting...
Mall Of America Extends A Hand Of Unity...
Surprise Samsung Galaxy S20 FE Beats Google Pixel...
After Apple And Tesla, Berkshire And Amazon Should...
Home Finance Here’s How Native Americans Fare Today, 129 Years After Wounded Knee
Finance 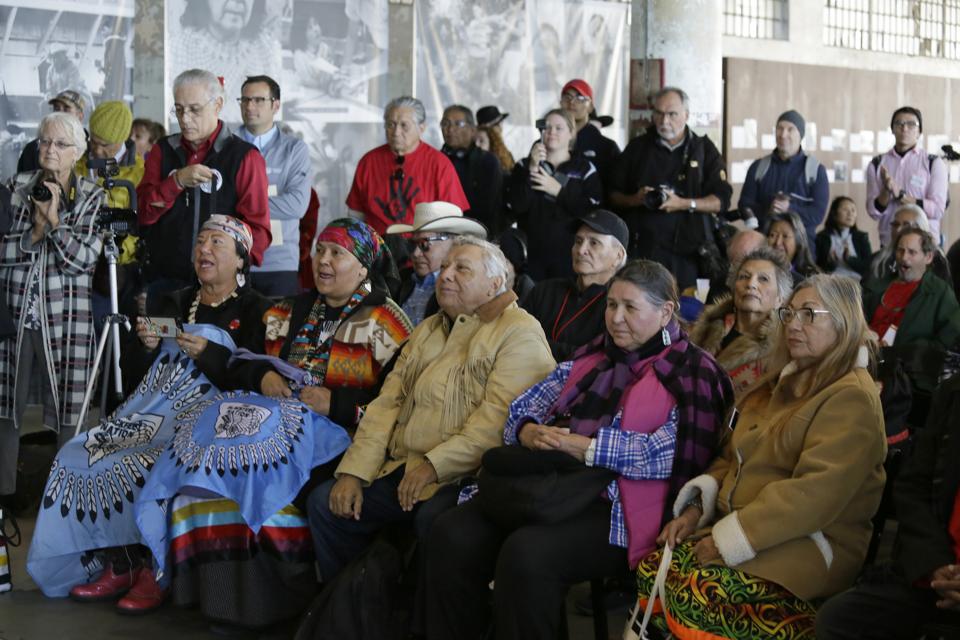 Sacheen Littlefeather, second from right in the front row, listens to ceremonies marking the 50th … [+] anniversary of the Native American occupation of Alcatraz Island Wednesday, Nov. 20, 2019, in San Francisco. About 150 people gathered at Alcatraz to mark the 50th anniversary of a takeover of the island by Native American activists. Original occupiers, friends, family and others assembled Wednesday morning for a program that included prayer, songs and speakers. They then headed to the dock to begin restoring messages painted by occupiers on a former barracks building. In 1973 Littlefeather represented Marlon Brando at the Oscars to decline his Best Actor award. (AP Photo/Eric Risberg)

Sunday marked the 129th anniversary of the Wounded Knee Massacre during which U.S. Army soldiers killed hundreds of Lakotas, almost half of whom were women and children.

It was an episode beyond shame piled upon a history of racism, genocide, imposed misery, and unchecked greed.

The ugly and inhuman attitudes were on open display everywhere. Even L. Frank Baum, author of the Wizard of Oz book series, regularly spewed venom and argued for the “total annihilation” of all Native peoples. “Having wronged them for centuries, we had better, in order to protect our civilization, follow it up with    by one more wrong and wipe these untamed and untamable creatures from the face of the earth.”

Such sentiments haven’t been seen in a daily newspaper for a long time (although with the current atmosphere in the country, you might wonder). Congress officially apologized for the killings in the 1980s and there’s been a recent push by some in Congress to rescind 20 Medals of Honor awarded to soldiers involved in the massacre.

All that, though, is more like a temporary aberration. As a society, we’ve more frequently buried the whole question of Native Americans. There’s a lot of needed discussion about long-term oppression and ongoing prejudice and mistreatment of many other groups. But I’ve found that when talking about income inequality, police shootings, and other topics, many people tend to ignore the peoples who were here first.

With a new year, it is a good time to remember not just the genocide, broken treaties, destroyed families, and other horrors, but the impact they’ve had and the results as seen through some statistics.

Here are some poverty by race or ethnicity numbers from the Kaiser Family Foundation. 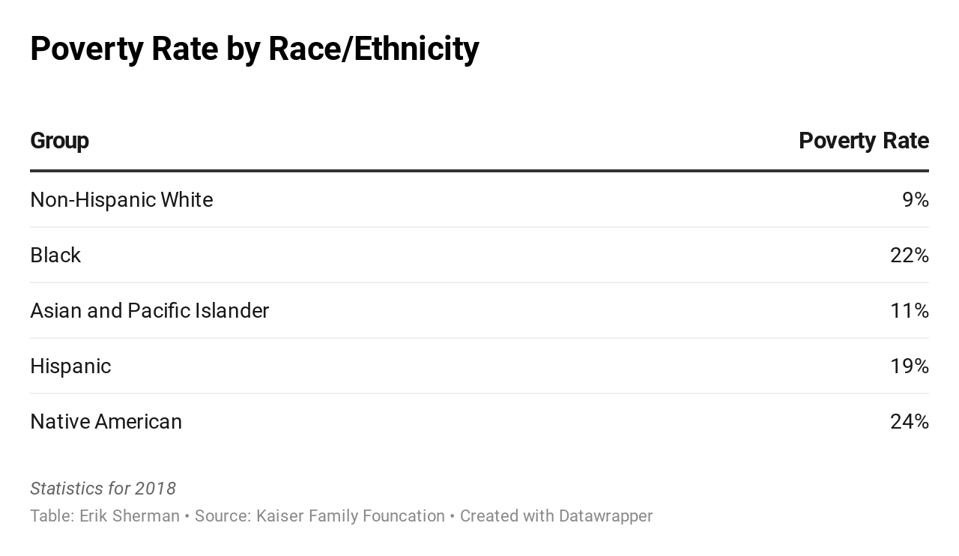 Some numbers show the results, like Native Americans being three times more likely to have diabetes and having a life expectancy that is 5.5 years less than the U.S. average. Or that while overall suicide rates were up 53% between 1999 and 2017 across all ages but increased 139% for Native Americans.

An examination of the monthly employment situation report from the Bureau of Labor Statistics doesn’t seem to have any numbers for Native American or American Indian as a class. The agency does have a 2017 unemployment rate of 7.8%. However, if you look at the Census Bureau My Tribal Area tool, you find great variation in unemployment within different states and tribal areas. For example, the Crow reservation and off-reservation trust in Montana has a rate of 15.3%, while the estimated unemployment rate of the Kickapoo Reservation in Kansas is 3%.

The difficulty in getting the same level of information for Native Americans as for other groups is a practical indication of how they are typically swept under the rug. And when your statistics don’t exist, there’s little push in public opinion or among politicians to do anything because you’re not there.

After Bumble Mixup Sharon Stone Is Back On The Dating App

For Bethesda Softworks, 2019 Was A Year Full Of Delays