Breaking
ESBC Major Updates: Tons Of Heavyweight Greats Added...
5 On-Demand Courses To Help Develop Your Leadership...
How to Run Nonprofit Marketing Ads
Entrepreneurs Are Bringing Transparency To Home Buying And...
Best Incentive To Get Vaccinated: Money, Messaging, Or...
Page Level Query Analysis at Scale with Google...
How A CIO Can Align IT With Business...
Blogger of the Month: Jo, Girl Eats World
6 Things Women In Business Know That Men...
How to Use First-Party Data for Ad Personalization
Pressing Reset—Putting A Fallen Unicorn Back On Its...
How We Went Viral: Promoting Content with Influencers,...
Blame Olympic Record Price Tag For Return To...
Apple iOS 14.5 Release: Should You Upgrade?
How to Come up with Podcast Topics and...
Why Gaming Gear Company Razer Launched A $50...
Home Technology Here’s What Happened In Fortnite’s Epic ‘Star Wars’ Event, Watch The Scene If You Missed It
Technology

Here’s What Happened In Fortnite’s Epic ‘Star Wars’ Event, Watch The Scene If You Missed It 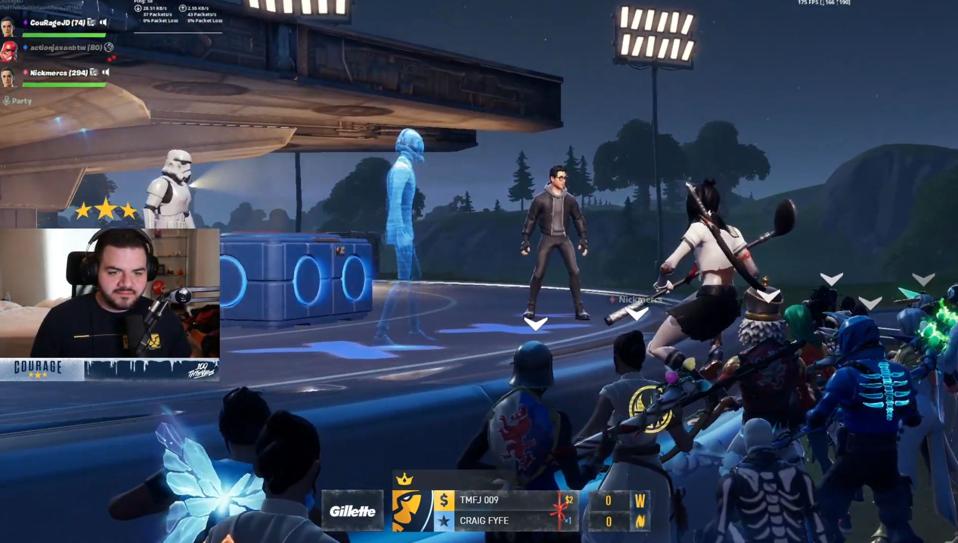 Fortnite’s Star Wars event didn’t get off to the best start: widespread server problems due to a huge number of people trying to log in made it so that a ton of people couldn’t get into the game, myself included. But this is 2019, and we have backup plans: I watched the thing on Courage JD’s stream, who was up and running the thing on YouTube. And even from that vantage point, it was one of the coolest events in Fortnite’s history.

It started off with a dramatic entrance of the Millenium Falcon, swooping around the island and dogfighting with Tie Fighters screaming all over the sky in the sort of map-wide drama that Epic really started doing with the monster event.

After that, the Falcon landed on a pad for everyone to gather around. Geoff Keighley, who is apparently now the host of the entire gaming industry, showed up as a sort of VR-wearing hologram to introduce the thing, followed by an anonymous Stormtrooper who was, for some reason, on the Millennium Falcon. After some stormtrooper banter JJ Abrams himself showed up in a remarkable, Fortnite-style JJ Abrams skin that I desperately hope will be made available in the item shop.

After some more stage antics, players voted on what scene they would see by hopping on corresponding platforms: they voted for “Jedi Mind Trick”, which turned out to be accurate. A giant projection screen showed up to actually play the scene, and all of a sudden we were all watching a movie inside of a video game, because life comes at you fast sometimes.

“Scene” might be a generous term. “Clip” is likely more accurate: Rey, Finn and Poe landed the Falcon on some sort of Imperial base/ship, shot some stormtroopers and then Rey pulled a Jedi mind trick on some more. That’s mostly it, but it was still fun to see. If you missed it, you can watch the whole event on Youtube: the event starts at about 23:00.

After that, however, things continued. A brief announcement from Emperor Palpatine kicked the next stage off, when all players rushed to a chest on the stage to grab a lightsaber and then immediately massacre each other with it. The game then restarted with lightsabers, blasters and new Star Wars challenges. It was a pretty epic time, all things considered, dampened only by server issues.