Breaking
How To Get Your Startup Business Off The...
How To Create A COVID Safe Construction Site
How to Make a Good First Impression at...
How To Retain Your First Startup Product Users
China Shipments To The U.S. Are 7 Times...
Reviewing ‘The iPhone Of Air Conditioners’
The 8 Best CRO Companies of 2020
AARP BrandVoice: The Doctor Will See You Now,...
ThoughtSpot’s New Cloud-Based Tool Aims At Boosting Growth...
10 Ways Service-Based Businesses Can Generate Positive Word-Of-Mouth...
A Customer-Centric Culture Starts By Embracing This One...
Report: Struggling Black-Owned Businesses Need More Government Grants
Why The Fed’s Outlook Paints A Sobering Picture...
As The End Of 2020 Approaches, The Cybersecurity...
Do Businesses Have A Role In Solving Poverty...
Young And Powerful: She The Change
Want To Attract (And Keep) The Right Clients?...
Best Legal Practices For Reopening Sports Venues During...
Why Now Is A Good Time To Start...
Home Technology Here’s What We Can Do If We Can’t Do A Carbon Tax
Technology 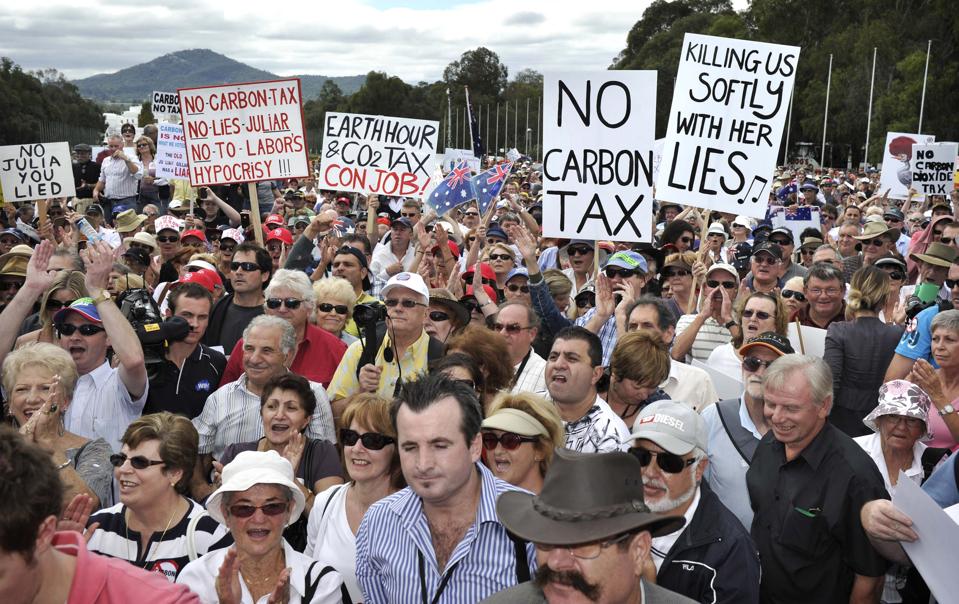 Protesters showed their anger against the Australian Labor Governments carbon tax in 2011. It was … [+] repealed in 2014. (AP Photo/Mark Graham)

Economists of all stripes love carbon pricing. They see it as market repair rather than market interference. They describe it with terms like “simple,” “powerful,” “elegant” and “fabulous.”

But many politicians, wary of knee-jerk opposition to taxes, treat it like a mattress full of bedbugs. And so a simple, powerful, elegant and fabulous resolution for the climate crisis remains on the sidelines.

“If you ask people what kinds of policies they would like to see, a carbon tax is way down on the list and does not get a majority of support except among left-leaning people and, you know, California,” said environmental economist Carolyn Fischer, a senior fellow at Resources for the Future.

So economists work on what they call “second-best solutions,” and Fischer has suggested a second-best that could become the best without requiring as much courage from politicians.

“I would very much be in favor of a nationwide carbon price,” she said in an October appearance at Stanford University. But “if we’re not going to get that legislation anytime soon what can we do that might be acceptable to get going right away?”

In a paper published by the Brookings Institute, Fischer proposes sector-specific performance standards that involve tradable credits that could eventually merge into a nationwide carbon price.

“If you ask people what policies do they support for addressing climate change and reducing emissions, you hear things like renewable portfolio standards—let’s set performance standards for industry—and so you hear a lot more about standards,” she said.

“So the idea here is to kind of bridge the divide between the economists and the people, because there are ways that you can start with standards—they’re a familiar tool, there’s often regulatory authority for doing it—but then you can design them in ways that are more market-based, and then you can use them to build up towards more broad-based carbon pricing.”

We’ve seen a hint of this approach before. When Congress failed to pass a cap and trade program in the first term of the Obama Administration, President Obama turned toward regulation in his second term. His Clean Power Plan imposed performance standards for the energy sector on the states, and while the methods of meeting those standards were left up to the states, the plan encouraged them to form carbon markets. Had the Trump Administration not scuttled that plan, those state or regional markets might have merged into a national market and expanded beyond the energy sector.

“Let’s get something that’s acceptable, that people are familiar with and trust as a policy, but let’s do it well,” Fischer said. “Let’s design it well in a way that actually can bring forth carbon pricing.”

Fischer’s plan would establish a benchmark for emissions in each sector. Enterprises that exceed the benchmark would pay a penalty, but that payment would buy a tradable credit. If enterprises stay below their benchmarks, they can sell credits.

The benchmark would increase with production, which would prevent enterprises from reducing production to sell more credits. Enterprises profit from the system as they produce more but emit less.

Fischer’s idea was well received by other economists on the Stanford panel, with qualifications.

“I really like the spirit of Carolyn’s excellent paper,” said Lawrence Goulder, a Stanford professor of environmental economics and a specialist in second-best policy.

“If you’ve got a lot of support for performance standards that we can use in the short term, why don’t we use them as well as we can, and then maybe ultimately they can morph into the holy grail, which is uniform carbon pricing via cap-and-trade or a carbon tax.”

Goulder hesitated, however, because of a concern that the second-best policy could make the best harder to achieve.

“If we push too hard for intensity standards it may be hard to retract them at some future point,” he said. “It may delay the possibility of ultimately moving to cap and trade at a national level or a carbon tax.”

Nat Keohane, a former Yale economist who heads the climate program at the Environmental Defense Fund, questioned whether the problem is really that a carbon price is hard to do—or that everything is hard to do.

New Lawsuit Tries To Save Immigrant Children From ‘Aging Out’