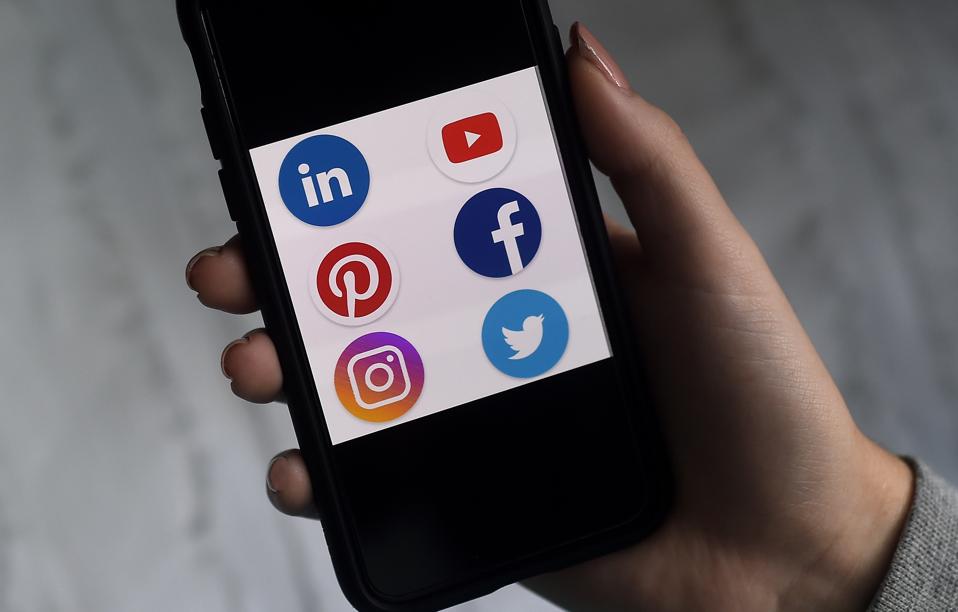 This illustration picture shows social media applications logos from Linkedin, YouTube, Pinterest, … [+] Facebook, Instagram and Twitter displayed on a smartphone in Arlington, Virginia on May 28, 2020. – Trump is expected to sign an executive order on May 28, 2020, after threatening to shutter social media platforms following Twitter’s move to label two of his tweets misleading. (Photo by Olivier DOULIERY / AFP) (Photo by OLIVIER DOULIERY/AFP via Getty Images)

Recent events have once again brought into focus the power of social media companies such as Twitter and Facebook to shape the public discourse, if not become headline news themselves. Both President Donald Trump and Senator Elizabeth Warren agree that high technology companies have too much power and like to talk tough with threats to “break them up.” The European Commission is actively investigating anti-trust issues against Amazon. Several prominent economists including Krugman, Stiglitz, and Rogoff have raised concerns about the implications of increasing market concentration. Elon Musk, Tesla’s CEO,  has joined the chorus as well.

But this sort of political posturing begs prior questions: what kind of power do high tech platforms possess, and why do they have so much of it in the first place? Oliver Williamson, who was awarded the 2009 Nobel Prize in Economic Sciences (along with Elinor Ostrom), provides some much-needed light among all the heat.

Williamson, who died on May 21, 2020, is most famous for helping us understand why firms undertake some activities themselves, while subcontracting others to outside vendors. While Williamson’s name will be indelibly linked to the “make or buy” question, his work can also help us understand the ongoing political debate on the role of big business in the modern economy.

Market Power in the New Economy

Oligopoly has become more pronounced across sectors. Think of Google, Amazon, Apple, Netflix, and Twitter. These are all digital platforms that represent multi-sided markets and therefore enjoy strong network effects and, by extension, pose high switching costs for many users, if not other players too. Google and Apple, in particular, bring together wireless providers, chip makers, app developers, handset manufacturers, advertisers, and consumers.

Some argue that this sort of market concentration vests the tech giants with enormous power. People on both sides of the political spectrum assume that these firms are abusing this power and creating more harm than good and, therefore, should be broken up. But, for Williamson, firm size was primarily a technical problem, whether a digital platform or old economy heavy industry. Firms of all types employ expensive assets tailored to very specific functions. These are hard to redeploy to alternative uses and include things such as machinery, skilled workers, and software.

For example, when iPhones are produced in Shenzhen, China, this means that Apple is vulnerable: the Foxconn plant may, with no advance warning, shift the goalposts and demand a larger cut of the profits from smartphone sales. This is because the plant is specialized in Apple’s particular needs and, in a sense, Apple is held hostage by this specialization. Similarly, Foxconn is vulnerable to Apple doing the same: demanding a higher share of the spoils, since Foxconn cannot simply cut ties with Apple and sell widgets instead of iPhones tomorrow.

While this dilemma may not affect things in the short run all that much, and just lead to a new division of the pie, over the long run it might mean that neither firm will receive the returns to their investment that they expected. Anticipating this problem, some firms like to do things in-house instead of relying on outside contractors. Retaining control over specialized assets avoids opportunism by their suppliers or distributors. Of course, in the case of Apple and Foxconn, these two firms have managed to find a contractual solution: They have developed safeguards to avoid their mutual “hold up” problem. But not all supply chains are populated by firms that have arrived at responses that allow them to remain vertically disintegrated.

As R&D and new technologies become more expensive, firms want to do two things. First, they want to operate at a sufficient scale so that production volumes can justify top-heavy investments. Consider the global automobile industry: as the costs of producing new models skyrocket, especially with the introduction of new technologies such as driverless parking, the scale is once again king. Most firms need a global market to defray these costs. But, following Williamsonian logic, they may also want to make sure they have control over new investments, especially those rooted in customized AI algorithms, and not be at the mercy of outside contractors. As Williamson predicted, firms either grow in size to house these technologies inside the firm or develop tightly defined technological alliances with other firms to share huge capital costs, the Apple-Foxconn story.

So, why then are politicians on both sides of the aisle wanting to break up big firms? After all, firm size has increased primarily because of a technological imperative: to economize on R&D costs and reach global scales to defray high fixed costs. Moreover, a large portion of firm size is the byproduct of the type of vertical integration that Williamson theorized about, not horizontal integration in which two rivals occupying the same rung in the supply chain merge. In fact, it is very hard to find any evidence that the big tech firms that are approaching trillion-dollar valuations constrain supply and raise consumer prices the way that big bad monopolists are supposed to do. On the contrary, Facebook and Google offer their products for free to consumers. And when it comes to the prices they charge advertisers and players on the other sides of the market, there is still no credible evidence that they get even close to monopoly margins.

How to Handle Innovative Firms that Have Grown Big

Politicians suggest that as firms grow in size, they elbow out competitors, and this could potentially hurt consumers. After all, Amazon indulged in a price war with the start-up, diaper.com, and eventually acquired it parent company, Quidis, in 2011 (only to shut it down in 2017). This potentially means that it can raise prices for nappies down the road (which apparently it has not) or now lacks the incentive to come up with the next big thing—perhaps self-cleaning diapers? Yet predatory pricing is an exceedingly rare occurrence, and, as we explain below, there are targeted solutions to addressing it.

How do we guard against abuse by super innovative firms and encourage innovation? Size may be necessary if we want firms to innovate, as Williamson’s work reminds us. For this and other reasons, breaking up firms is probably not the solution to the problems associated with growing firm size in the digital economy. While AT&T was broken up in 1984, thirty-five years later, the telecom market is veering towards a Verizon & AT&T duopoly.

Instead, a mix of litigation and smart regulation can protect society when firms use their size in harmful ways. The good thing is that modern antitrust law has developed a host of surgical patches to exclusionary dealings such as buyers foreclosing suppliers to raise barriers to entry and predatory pricing. For example, when limited in scope and duration, consent decrees can eliminate untoward behavior by firms that harm consumer welfare. Indeed, Williamson’s work informs the smart solutions that are now imposed on a case by case basis and rooted in careful market analysis. Sledgehammers like breaking up big firms are not. Politicians need to appreciate that the solution to predatory behavior is not to kill innovation by breaking up firms.

Nives Dolsak is the Stan and Alta Barer Professor of Sustainability Science and the Director, School of Marine and Environmental Affairs at the University of Washington.

Victor Menaldo is a professor of political economy at the University of Washington whose research and teaching have been greatly influenced by Williamson and other new institutional economists. He has had the pleasure of communicating Williamson’s contributions to students and rising regulators at a host of government agencies.

Aseem Prakash is the Walker Family Professor for the College of Arts and Sciences and the Founding Director of the Center for Environmental Politics at the University of Washington.