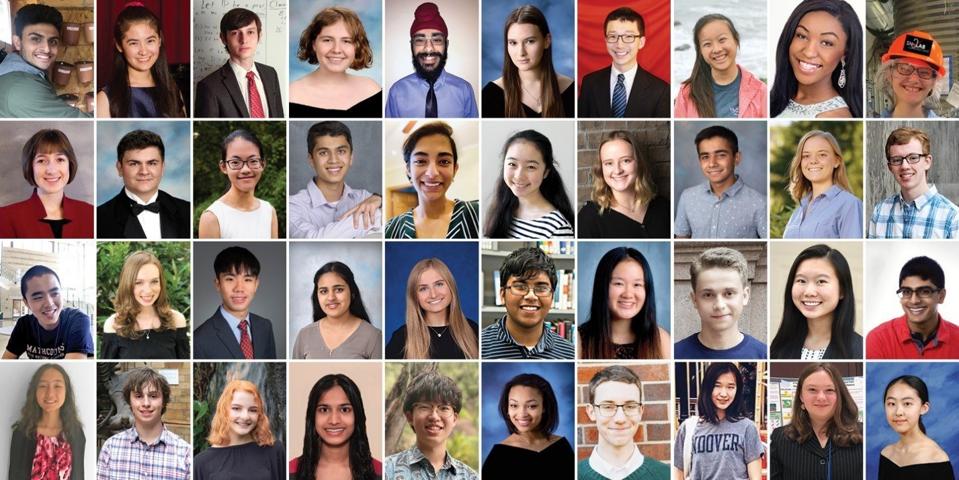 Society for Science and the Public

For Anaiah Thomas, climate change is not just an issue she reads about in the news. It’s personal. An immigrant from Jamaica, she grew up having family members from Kingston “crash on our couches” at her New Jersey home to escape catastrophic hurricanes and floods that were devastating their island.

“As a young kid, I didn’t yet know about the cascading effect that living in an active hurricane basin had on my loved ones,” Thomas explains. “These facts, that I was eating and sleeping and playing with frontline youth and refugees of climate disaster, were not things I was privy to as a child.” 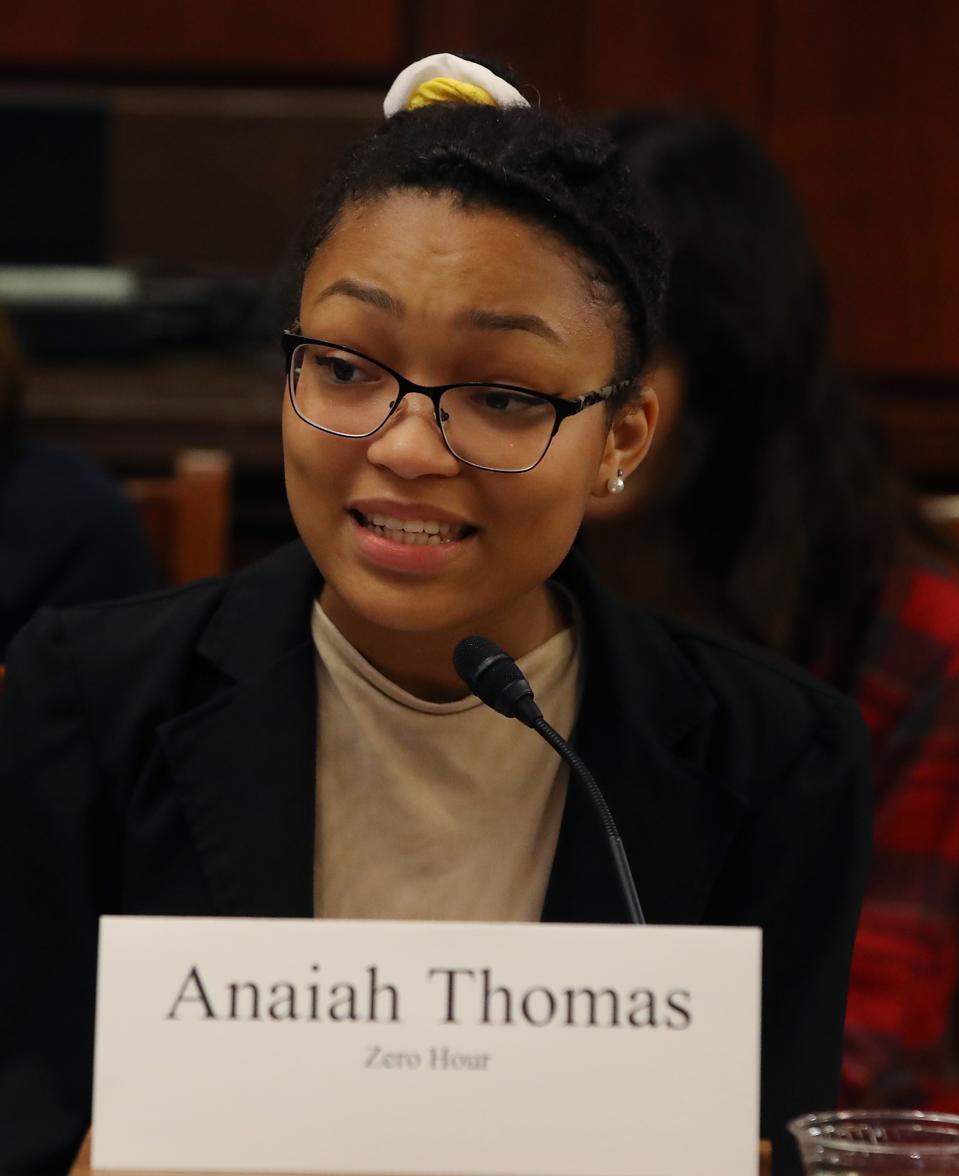 WASHINGTON, DC – SEPTEMBER 17: Student Anaiah Thomas speaks during a Senate Climate Change Task … [+] Force meeting on Capitol Hill, on September 17, 2019 in Washington, DC. On September 20th students from around the world plan a walk out to demand action on climate change. (Photo by Mark Wilson/Getty Images)

Now, as a teenager, climate science has become a passion that’s led her to research the relationship between global warming, massive flooding and the rising intensity of storms and wildfires around the world.

Thomas is among 24 high school girls chosen from a pool of nearly 2,000 applicants as the top 40 finalists in this year’s Regeneron Science Talent Search (STS), the nation’s oldest and most prestigious math and science competition for high schoolers (previously called the Intel STS), and what President George H. W. Bush famously called the “Super Bowl of Science.”

For the only the second time in the competition’s 80-year history, girls outnumbered boys in the finalist pool, a fact that was underscored Maya Ajmera, President and CEO of the Society for Science & the Public, the organization that runs the event:

“These students are our future innovators and scientific leaders,” Ajmera explains. “As a woman in science myself, I recognize that girls need a voice, a space and a platform to think about solving the world’s biggest problems.”

The competition gives girls that platform. Ajmera hopes it will open doors not just for the nation’s best and brightest, but for all students who have a passion for STEM.

“I want to give every young person in this country the opportunity to become a scientist or engineer, if that’s what they choose to do,” she says.

The budding female scientists tackled a variety of STEM-related topics in this year’s competition, including a deep-learning model for detecting guns and knives at schools, a computational method for classifying breast cancer tumors by race, and an analysis of the effect of climate change on hurricane intensity and large-scale flooding.

“More than solving equations or building algorithms, these young women are using science to effect change and make the world a better place,” Ajmera explains.

Here, we share a few highlights of the incredible research these girls are doing.

The effects of climate change on hurricane intensity

Growing up on Long Island, Kyra McCreery was in fourth grade when Hurricane Sandy (2012) wiped out a good part of her town. From that point, she became interested in hurricanes— what caused them, why they were getting worse over time, and what could be done to protect vulnerable communities like her own.

In high school, she gravitated towards the environmental realm, in the hopes of “better understanding devastating storms like the one I experienced as a child.”

Her current research investigates the role of climate change in the gradual slowdown of North Atlantic hurricanes, which has led to intensified storm precipitation, flooding and environmental devastation.

“As climate change becomes an increasingly dire threat to environmental stability,” she explains, “it’s important to have a better understanding of hurricane behavior in a warming world so we can adapt to climate shifts and ultimately devise solutions to combat the crisis.”

In McCreery’s view, the main inhibitor to greater female participation in STEM fields is the lack of female role models, particularly in male-dominated industries like tech and engineering.

“In tech and physical sciences, girls must actively combat the stereotype that males are more competent and adept at coding, engineering, and other hard sciences,” she explains. “If girls observe other girls (and women) attaining success in these fields, the dynamic will shift and female participation in STEM will become normalized, encouraged, and celebrated.”

As a fifth-grader viewing the news of the Sandy Hook school shooting in 2012, Ellie Yang was scared and devastated, but there was nothing she could do but sit back and watch.

“All of this came crashing down during February of my sophomore year when the Parkland shooting marked the first major school shooting since Sandy Hook,” Yang explains.

Until that point, her school practiced the typical “intruder” drills, but Parkland stepped it up to another level.

“Suddenly, we were being trained on how to barricade doors, tie doorknobs with extension cords, and make an escape,” she explained. “We were even told, if all else failed, to throw objects at the intruder to cause ‘distractions.’”

For Yang, this was not enough. Realizing she could no longer be a bystander, she decided to turn to technology to solve the problem.

“Knowing that the problem of gun violence was not going to fix itself, I set out to create a working model that would help minimize the number of lives that mass shootings tragically take.”

The effort was worth it, says Yang. In operation, the system analyzes video and returns results fast, in under 100 milliseconds. She believes her product is 400 percent more accurate than commercially available software.

“My ultimate goal is to facilitate faster emergency responses to save lives.

For Yang, doing hands-on experiments from an early age showed her the true value of science. She recalls a sixth-grade class trip to Missouri University of Science and Technology, where she and her classmates were asked to build a paper contraption to keep an egg from cracking when dropped from two stories up.

“Ever since, I have known that I want to do something with my life that allows me to apply scientific principles to address real-world problems,” she explains.

After a favorite aunt was diagnosed with breast cancer, Maria Fields saw first-hand the damaging effects that chemotherapy had on her relative.

“Chemotherapy seemed to do more harm than good,” she explained.

Years later, at a routine medical visit, her aunt was told by a doctor that, “black women do not always respond to chemotherapy,” but doctors did not know why.

Fields took that as a cue to begin researching the topic. After learning that black women are 40% more likely to die from breast cancer than white women, and that the breast cancer mortality rate is higher among African American women than any other race, Fields began investigating why these disparities exist.

“While some studies pointed to a difference in socioeconomic status, diet, and health care as a cause for the disparity, I wanted to know whether genetics played a role,” she explained.

Her research focuses on “triple negative breast cancer” (TNBC), a rare form of breast cancer that is 2-3 times more likely to be diagnosed in black women.

“I conducted a statistical analysis on the gene expression data of African American and European American (white) triple negative breast cancer patients to explore a possible genetic basis for the cause of the significantly high mortality rate in African American women with TNBC.”

While her research is still underway, she advises other girls interested in STEM to not let being the only girl in the room deter you from pursuing your goals.

“If you notice that you are the only minority or person in the room who looks like you, keep going,” she says. “And most importantly, as you advance and make progress, bring others with you. You never know who you could inspire and when.”

Read about all 40 finalists in the 2020 Regeneron Science Talent Search.

MLB The Show 20: 21 Legends Still Missing From The Roster

What Is Really In Your Food? TeakOrigin Guide Has The Answers

30 Under 30 Europe: Making Manufacturing And Industry...