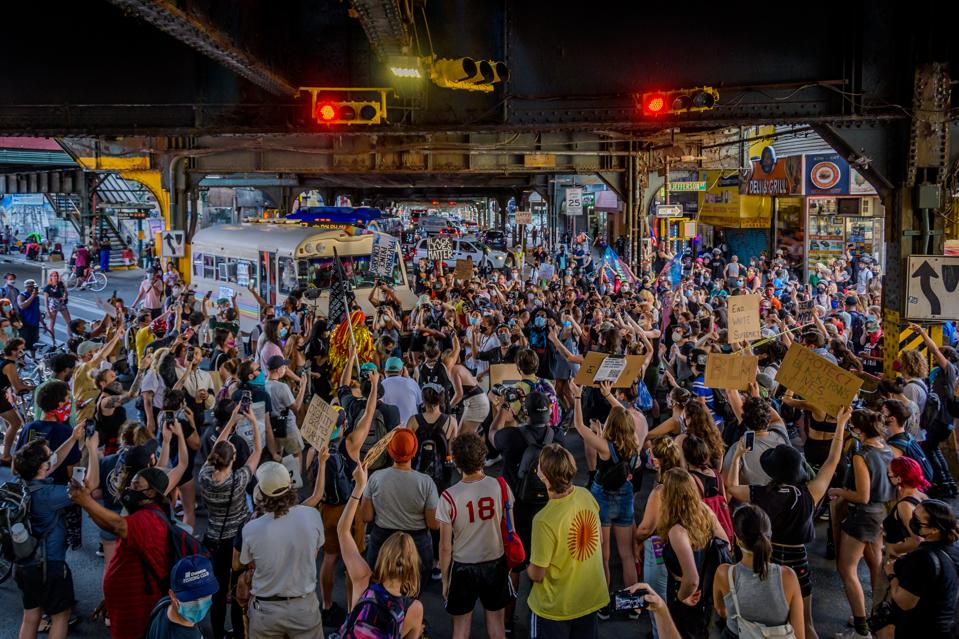 BROOKLYN, NEW YORK, UNITED STATES – 2020/06/12: An immense crowd of protesters marching down the … [+] streets of BedStuy. Hundreds of Brooklynites joined Democratic candidate for U.S. House New York District 7, Paperboy Love Prince for a massive march from BedStuy to Bushwick demanding justice for all victims of police brutality, making a loud call to defund the NYPD and invest in communities. (Photo by Erik McGregor/LightRocket via Getty Images)

DJ iMarkkeyz doesn’t focus on making viral music, but he’s hit-savvy with his remixes. His latest has become an anthem at protests for Black Lives Matter and defunding the police. Plus, “Lose Yo Job” has profoundly impacted the life of the woman whose voice was featured.

iMarkkeyz often takes audio clips and remixes them into catchy, full-length songs like “Coronavirus,” which he released in March using a Cardi B clip. “I just find words that stand out or a sound that stands out and go from there,” he said. For “Lose Yo Job,” iMarkkeyz collaborated with DJ Suede The Remix God. This time, their sound came from a viral video of a woman singing and dancing while being detained without reason outside a club in South Carolina. In response, she sang, “you about to lose yo job. Get this dance.” She was let go shortly after.

The woman in the video is Johnniqua Charles. She broke out into song and dance while in cuffs, unplanned. Even the security guard detaining her is seen holding back his laugh to the side. This is just type of person she is, she said. She naturally tries to put smiles on people’s faces.

Although this video was filmed in February, it has gone viral in the last couple weeks. It’s the perfect time for the video to resurface and go viral because the song carries the spirit of recent protests for defunding the police. Most importantly, Charles says the video and remix going viral might have saved her life.

She told through tears in an Instagram video, “All the donations and all the stuff y’all have given me, y’all don’t understand man. This is the breakthrough that I needed.”

“If I had of still been in the situation I was in, they would have probably had to come identify me at the morgue,” she said, or her family may have gotten a phone call to go identify her body. Charles was facing homeless and addiction, and she had turned to sex work to survive.

iMarkkeyz and Suede didn’t know about Charles’s situation at first, but Charles’s sister reached out to inform them. They helped set up a GoFundMe for Charles and shared the song’s proceeds. As of today, the GoFundMe is at least $13,000 over its $40,000 goal. “The fact that we used our platform to change somebody’s life is just, like, dope,” iMarkkeyz said.

The support and funds to Charles have helped her reunite with her family, including her 3-year-old son. Via her Instagram account, Charles continues to share updates about her life while celebrating the remix that brought the beat into her song.

In New York City, protesters have played, danced to and sang along with “Lose Yo Job.” It has also been seen on signs at protests as it gains popularity. This means a lot to iMarkkeyz and to Charles, who said she’s in awe.

“I have always loved seeing people’s reactions after they’ve listened to a song that I remix,” iMarkkeyz said. Seeing people use the song amid all this chaos to uplift their spirits, he said, is a great thing.

McDonald’s A Top Buy After Recent Dip In Stock

Brands Look Beyond COVID-19 For Role Of Social...

Teens On TikTok Are Trying To Save Barron...

PGA Events Turn To Social Media In The...