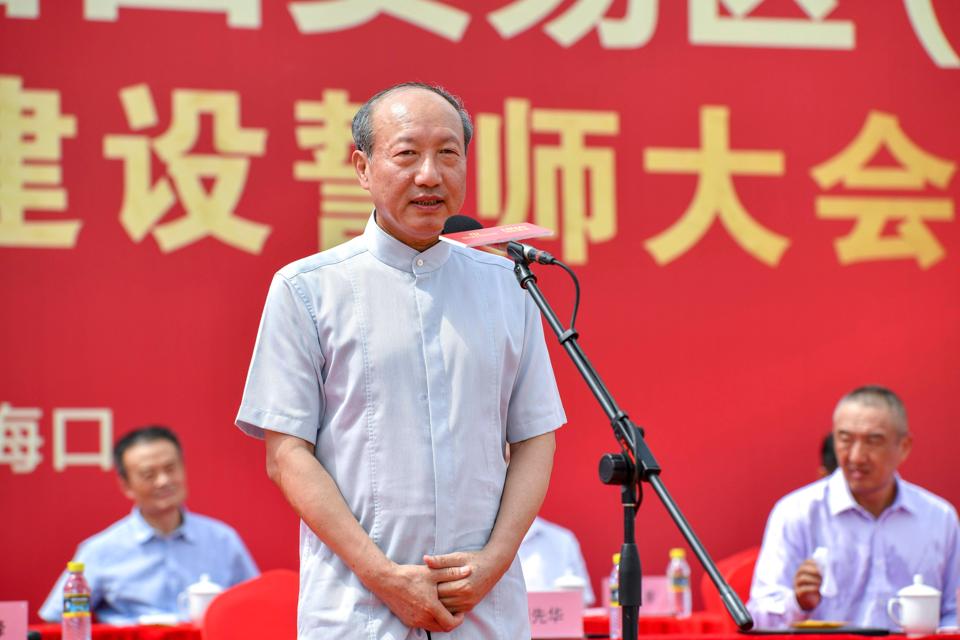 Chen Feng, chairman of HNA Group, delivers a speech at the construction site of the second phase of … [+] Haikou Meilan International Airport on August 21, 2018 in Haikou, Hainan province.

China’s debt-laden HNA Group has effectively handed control over to the government after it appealed for help to resolve its liquidity crisis. But the economic fallout from the spread of the coronavirus will almost certainly make it harder for the conglomerate to raise cash and reduce its massive debt burden.

The embattled aviation-to-finance conglomerate announced on Saturday that the Hainan provincial government has appointed new leaders and organized a working group to manage its liquidity. While there doesn’t appear to be a change in HNA’s ownership structure, analysts say the changes indicate that authorities, including senior officials from the China Development Bank and the Civil Aviation Administration, have assumed control of HNA’s operations and its ongoing efforts to offload assets.

“Before, they gave HNA a chance to do it their own way,” says Warut Promboon, managing partner of Hong Kong-based research firm Bondcritic. “Now, with this board of governance, they will basically tell HNA what to do .”

The move underscores how HNA’s financial health has deteriorated following the outbreak of the coronavirus, which has infected more than 80,000 in China and hobbled the travel industry. Concerned that the company might not be able to pay back borrowings that stood at a whopping 554.8 billion yuan ($80 billion) as of June 2019, especially as its main source of revenue is derived from aviation, authorities are likely to take stronger measures to push the company to dispose of more assets.

For example, assets that HNA considers core to its operations are more likely to be offered up to potential buyers. That includes passenger aircraft, cargo planes and even equity stakes. The parent of the Shanghai-listed Hainan Airlines also holds “significant minority interests” in a number of China’s regional airlines, and the country’s provincial governments appear to be the most likely buyers of these types of assets because they can further consolidate their ownership, says David Yu, a finance professor at the New York University in Shanghai.

These businesses, which could all be up for sale, were originally acquired during a credit-fueled acquisition spree that saw HNA snap up a diverse range of companies, including stakes in Deutsche Bank AG and the Hilton hotel chain. The staggering amount of borrowing–often financed by state-affiliated banks–and the associated financial risks compelled the government to take action. In 2017, authorities started to push the firm, along with equally acquisitive peers Anbang Insurance, Dalian Wanda and China Fosun, to slim down and dispose of assets.

HNA had raised $43 billion through the disposal of hotels, properties and insurance firms, Chairman Chen Feng told China’s Caijing Magazine in 2018. According to a separate statement on its website, he and CEO Adam Tan will retain their roles, and this suggests the takeover “was friendly in nature,” says Brock Silvers, managing director of advisory and investment firm Kaiyuan Capital.

Although HNA appears to be faring better than Anbang Insurance, whose former chairman Wu Xiaohui was sentenced in 2018 to 18 years in jail for fraud and embezzlement, it still has a debt-to-capital ratio north of 90%, estimates Bondcritic’s Promboon. Its listed unit, Hainan Airlines, is expecting an operational loss of 1.6 to 2.2 billion yuan for 2019, after excluding a one-time equity sale of 2.2 billion yuan.

Analysts say government intervention might not give HNA all the help it needs. While it may receive other forms of assistance, including loans and debt extension, disposing of assets now may turn out to be a significant challenge. The coronavirus is estimated by Oxford Economics to slash this year’s global GDP growth to below 2.3% as the economic impact widens, and will most likely make investors a lot more hesitant to commit to more deals. HNA often paid lofty prices in its previous acquisition spree, and it is increasingly difficult to sell at a profit or negotiate a desired valuation in such a risk-averse environment.

“In the current environment, there will be a valuation overhang because the coronavirus’s impact to the travel industry,” Yu says.

The new leadership wants to make sure HNA’s creditors aren’t forced into losses or write downs to protect the stability of the banking system, according to Kaiyuan’s Silvers.

“Core aviation assets were formerly off-limits, but are now being offered to competitors,” he says. “Whereas the old team may have been concerned with protecting HNA, the new team will likely prioritize the protection of creditors.”