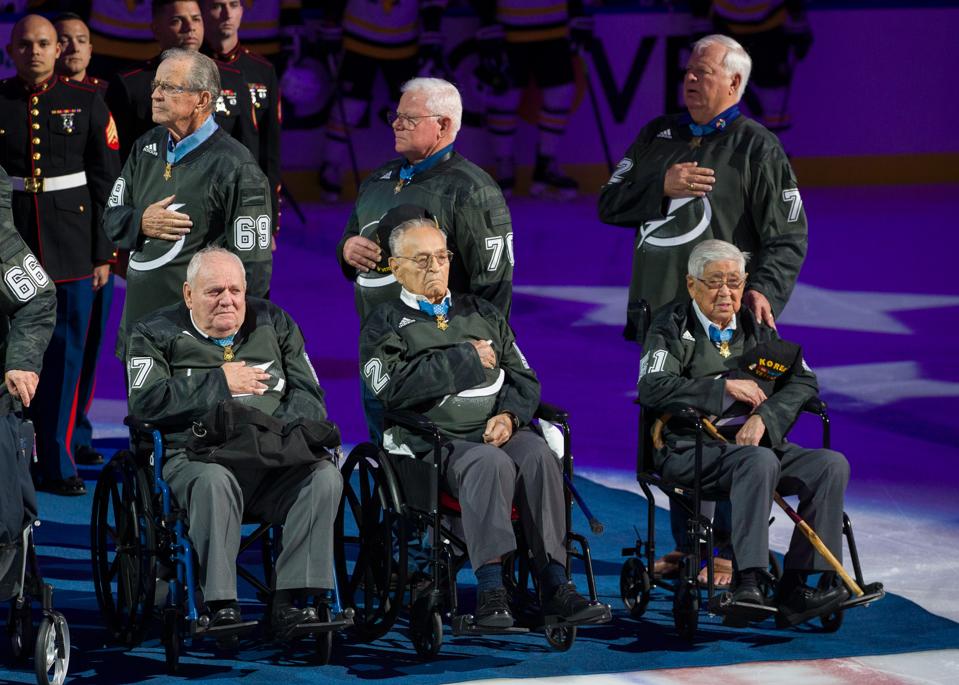 The Tampa Bay Lightning honor 46 of the 70 living recipients of the Congressional Medal of Honor … [+] before a game against the Pittsburgh Penguins at Amalie Arena on October 23, 2019. (Photo by Scott Audette/NHLI via Getty Images)

TAMPA — Anybody who was fortunate enough to be at Amalie Arena the evening of October 23 will not soon forget a remarkable pregame ceremony that featured 46 of the 70 living recipients of the Congressional Medal of Honor.

There were few dry eyes in the arena by the time the ceremony concluded.

It was yet another special and memorable moment for fans of a team that has made honoring active and retired members of the military part of its fabric.

The Lightning served as the presenting sponsor of the 2019 Congressional Medal of Honor convention, which took place in Tampa the week of October 22. The evening of the 23rd, before the customary 19,092 at Amalie Arena and a national television audience enjoying an uninterrupted broadcast of the pregame pageantry, the veterans made their way to center ice while wearing their personalized Lightning jerseys.

“There are certain moments that, only by association, are you lucky enough to be a part of,” said John Franzone, the team’s vice president of game presentation, who in his 12 years with the organization has been instrumental in bringing the military community and the Lightning together. “My heart was pumping with patriotism. It transcended the game and you don’t see that too often in sports. There was a hockey game, but the (Medal of Honor recipients) are on a different plane. That was a special night I will never forget.”

Through the effort of owners Jeff and Penny Vinik, Franzone, and many other individuals, Lightning fans are treated to some form of military recognition immediately before and during each game.

That recognition has included 185 World War II, Korean War and Vietnam War veterans who have been anthem guests, standing alongside TSgt Bryson.

“We have done enlistments as part of Military Appreciation Night almost as a tradition,” said Franzone, who worked with the Tampa Bay Rays prior to joining the Lightning for the 2008-09 season.

A game-to-game tradition is honoring an active military member with a Standing Salute, which takes place during a television timeout. The 45-second segment is produced in such a way that fans not only get to see and applaud the individual, but also become familiar with his or her background, which is presented on the center ice video display board.

“We do it with graphics and music and you are compelled to absorb their bio,” said Franzone. “So, by the time we introduce them you have a feeling that you know them and how many deployments they made, the awards they have won, where they currently serve. Because of how we do it, you can grasp that inside of 45 seconds.”

It may be difficult for some to grasp the rate at which the nation is losing its World War II veterans. According to statistics published by the U.S. Department of Veteran Affairs in 2019, they were passing at a rate of 294 per day. Of the 16 million Americans who served in World War II, 389,292 were still with us at the time of the report. 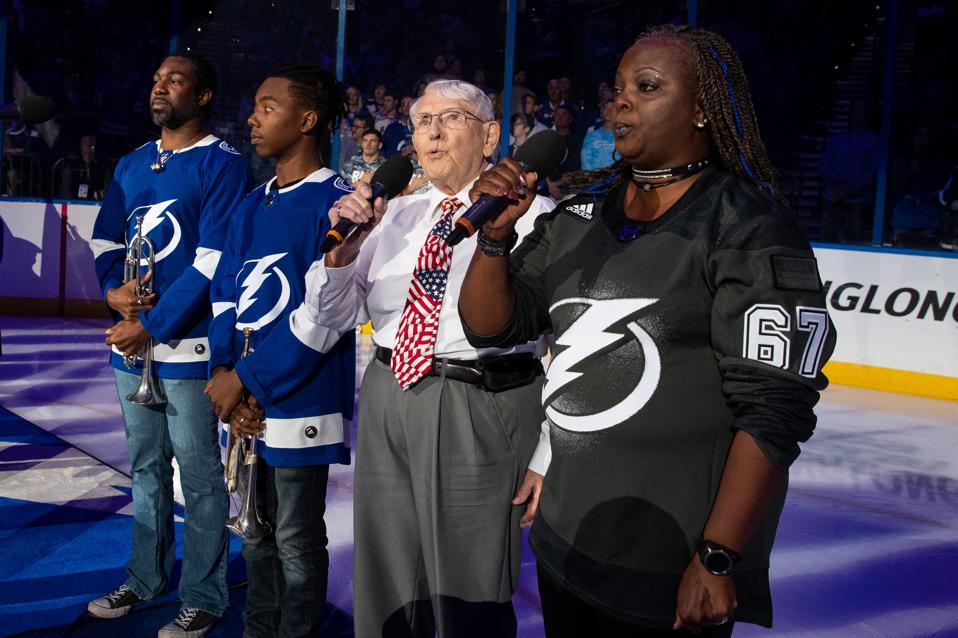 It is a special feeling for TSgt Bryson to stand next to a veteran as she sings the anthem. Being joined by a World War II veteran elevates that feeling.

“When we have World War II veterans, it is a really wonderful thing for my heart because I know we don’t have many of them left,” said TSgt Bryson, whose first performance prior to a Lightning game was December 7, 2013, the 72nd anniversary of Pearl Harbor. “I feel so blessed to be able to stand next to them. I felt the same when in the company of all the Medal of Honor recipients. That was probably the last time you are going to see that many Medal of Honor recipients together in one place.”

With Tampa ranked as the top city for veterans and with MacDill Air Force Base less than 10 miles south of downtown Tampa, there are ample opportunities for the team to engage active and retired military.

“By virtue of having the base here in Tampa Bay proper, this is a military town,” said Franzone. “A lot of civilians work at the base and a lot of servicemen live in the community, so it really is interwoven. Out of sheer tenure and initiatives, I have been fortunate enough to become involved with them and get to know them.”

Because of that, Lightning fans have gotten to at least become familiar with hundreds of military members recognized by the team over the years. In making that happen, Franzone has received much help from people within and connected to the military.

Mark Van Trees is one such individual. Van Trees was chairman of the 2019 Congressional Medal of Honor convention and is the director of Support the Troops, a non-profit that supports more than 30 military-related charities throughout the Tampa Bay region and has assisted the military by, among other things, sending items to troops overseas.

“It’s an organization that I am just blessed to be associated with,” Van Trees said, in referring to the Lightning. “Any time I have asked them to do anything to support the military, it is not a question of getting back to me. Rather, it is ‘What do you need and when do you need it?’ That permeates throughout the team’s entire staff.”

Appreciation for what the team does in recognizing the military permeates throughout the most visible members of Lightning: the players.

The evening the Congressional Medal of Honor recipients were honored, team captain Steven Stamkos, along with Pittsburgh captain Sidney Crosby, took part in the ceremonial faceoff and spent a couple of minutes chatting and shaking hands.

It was a moment Stamkos will not soon forget.

“To see all the (Medal of Honor recipients) and to get a chance to do the puck drop was pretty amazing,” he said. “It was something that is probably going to be a once-in-a-lifetime experience, to be in the same building with all those (veterans) who have done tremendous things for this country.”

“It was such an honor to be a part of it,” said the New Rochelle, N.Y. native. “Seeing some of those individuals from World War II, that is something that gives you chills, especially as an American.”

Whether it is a Standing Salute or something on a larger scale, there is much coordination and care among many Lightning employees who make it happen. It is far from easy, though the presentations are always first class.

“It is not one person,” said Franzone. “It is a team effort and it is so gratifying to be a part of it.”

These Players Made History With Their Selections In...

Will The Banks Play Fair On Emergency Loans...

The Flip Side Of A Crisis: Innovation