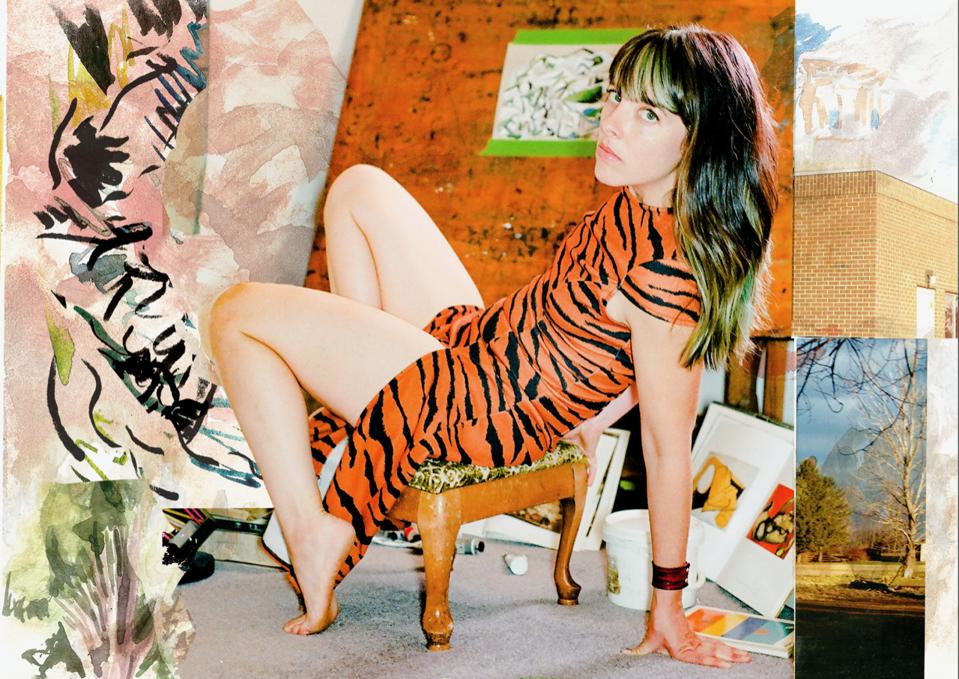 Singer-songwriter Frances Quinlan of the Philadelphia-based indie rock group Hop Along is a Joni Mitchell fan, and has been since the age of 10. During a recent conversation, Quinlan speaks admiringly of the legendary artist and her vast and wide-ranging discography. “When I was a kid, I loved “Big Yellow Taxi” and “Chelsea Morning”— a lot of her earlier stuff,” she says.  “And then Blue was a big one through my teenage years. In my late twenties I heard Court and Spark and that just blew my mind. The adventurousness of her sound in the ‘70s is some of the bravest songwriting I can think of—I mean, just completely ignoring structure and bringing jazz into folk music. I could go on and on about Joni.”

One can immediately trace Mitchell’s influence on a song Quinlan wrote and recorded, “Went to LA,” off of her own recently-released album, the stunning Likewise. It wouldn’t be off the mark to say that Quinlan is following a similar and eclectic musical path that Mitchell paved decades ago. In contrast to Hop Along’s straightforward guitar-dominated rock, Quinlan’s solo record can be described as minimalist, ornate and experimental—incorporating sonic textures and flourishes that push her impressionistic free-form lyrics and expressive voice more to the fore. It’s a different approach that Quinlan had wanted to take in making Likewise.

“I knew I didn’t want to strictly record myself playing a guitar,” she says. “The guitar for me has always been a vehicle for songwriting and I kind of vaguely knew that. It certainly works in Hop Along.  But for this album I knew that I would want other elements just because it was only me.”

Quinlan had an inkling that she would record her own music outside of Hop Along, as her solo compositions pop up on the band’s previous albums. “It wasn’t a shock to just pursue that a bit more heavily. It’s certainly quite different. This is the first time I’m navigating a serious project aside from Hop Along. Hop Along was the only serious project I’ve been in since I started performing seriously.”

The solo project can be traced to two songs that Quinlan wrote, “Went to LA” and “A Secret,” both of which literally didn’t fit on the band’s last album. “I started writing them in late 2013,” she says. “They transformed over the years, but they were recorded in 2017 intended for Bark Your Head Off, Dog. In discussing what songs to leave off, I couldn’t really decide on a band song. It just felt right to keep “How You Got Your Limp” on the record, and then take the other two elsewhere. I talked to everybody and they’re very supportive. My band mates—I’m incredibly lucky to work with them.”

Quinlan wasn’t completely away from her Hop Along bandmates for Likewise, as guitarist Joe Reinhart served as her co-producer and helped shape the sound. “He is really good at steering,” Quinlan says. That’s what makes a great producer is being able to realize a vision in a cohesive and adventurous way.  The album wouldn’t be what it is without him. He was really in it with me. I was very fortunate.”

There is a certain intimacy conveyed throughout Likewise, as if the listener is right there in the studio with Quinlan singing her songs. She says she noticed the lyrics were threaded by the theme of dialogue “between very close or struggling individuals, familial or friends or either people who are close or people who once were close. The funny thing about a song is a song can’t help but be one-sided, unless it’s literally a duet. So there’s sort of this like doomed dialogue in a way. I was worried that the album would be in any way hopeless, but I think there’s just enough hope on it.”

One of the tracks first unveiled ahead of the new record’s release last year was the electropop “Rare Thing,” which Quinlan describes as one of those hopeful tracks and was inspired by her infant niece. “She’s about to be three, and she’s an absolutely fantastic person,” Quinlan says. “She’s the first person I ever held who was under 24 hours old. I never held a complete newborn. I had this dream that she was basically greeting this whole room of strangers and I was so terrified for her and myself, and she was completely unafraid, so fascinated with the world. Very cool thing to witness.”

Another song, the whimsical-sounding “Your Reply,” tackles the theme of relationships. “When you start thinking about all the people in your life,” Quinland explains, “there’s a lot to mull over. Especially the longer you have a person in your life and the more you give yourself to other people and vice versa, I think many of us have a desire to feel known. But then there’s also a great compromise to that. I certainly can relate to the fears of feeling summed up and judged. It strikes me as hopeful in that it’s about two people that are so close, they come so close to true understanding and at the same time, we’re not even sure of ourselves.”

Likewise concludes with an electronic, angular-treated interpretation of indie rock Built to Spill’s “Carry the Zero.” Reminiscent of something that Laurie Anderson, Brian Eno or Robert Fripp might have recorded, Quinlan makes that cover quite original-sounding. “Joe brought so much to that song,” she says. “When he put that Ableton beat,  it made me think of the ‘90s and I absolutely loved where he took it. It’s just so much fun to mess around on keyboards and not worry at all about where my skill set is supposed to be. I didn’t push myself as a player and so musicianship is not something I value so much as mood setting. And it was just so much fun to really not have to worry about what I was supposed to be doing.”

And like Joni Mitchell, Quinlan expresses her artistic vision not only in the music but also through fine art: the cover of Likewise features her own painting. Does her music and painting inform each other? “Part of me wants to think that they’re separate. You want to think that you’re this person with more than one dimension or whatever. But I certainly don’t see how they couldn’t influence each other. The nice thing about painting that I really enjoy is that you can make all the mistakes you want and you have this benefit of being alone. No one witnessing them. I do believe that I think differently painting than I do songwriting. It feels a little bit less like problem-solving and a little more like playing. I hope that the two can evolve together.” 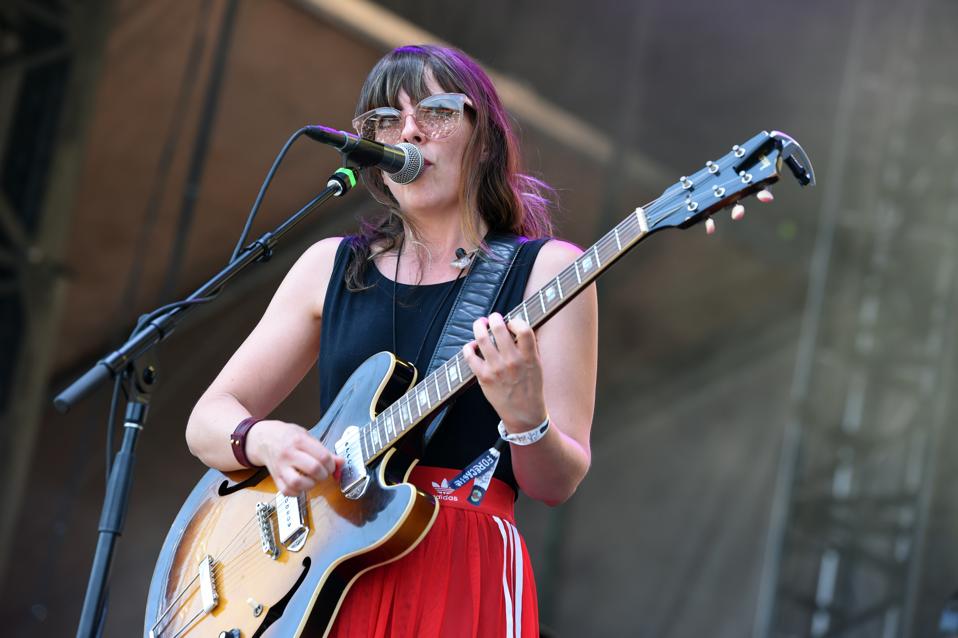 Quinlan will be touring on her own behind the new album starting this March,  including an appearance at SXSW in Austin, Texas. Additionally, she’s working on new songs for Hop Along. “Those guys [in Hop Along] bring so much energy to the stage, and I certainly miss that,” she says. “I can’t do what those guys do. They’re just incredible at their craft and they have their individual passions and all identities that they bring to Hop Along. This will not be that. And it shouldn’t be. I want it to be different.”

She says that she hopes that projects with Hop Along and as a solo artist can keep existing harmoniously. “I’m again so lucky to have such supportive bandmates, and the year has so far been a very exciting one.”

Authenticity: What Is It? How Do You Have It? How Should You Use It?

How to Outsource Small Business Work

There Are No Gigs, But Filmmakers Are More...

Traveling soon? Why Not Let Your Pet Stay...