Breaking
Everything You Need to Know About Corporate Social...
Is Adaptive Leadership the Key to Motivating Employees?
Why business events are set to return with...
Business events set to return with a bang!
Expanding Internationally: 5 Things to Consider for eCommerce...
How the Machine Shop Is Going Digital in...
Sustainable Food Packaging Is Helping the Hospitality Sector...
Top 5 Investment Practices To Make More Money...
Managing IT Requirements for SMEs: 5 Aspects that...
How To Build a Successful Luxury Brand In...
Finding The Best Google AdWords Consultant for Your...
8 Top Tips To Help Your Agricultural Business...
Three Reasons Why Office Décor and Design Are...
Looking To Improve Efficiency In Your Business? Here’s...
AI and machine learning for business
How Social Media Changed the World
Home Business Hoping For Josh Donaldson, Braves Pilot Prepares For Life Without Him
Business 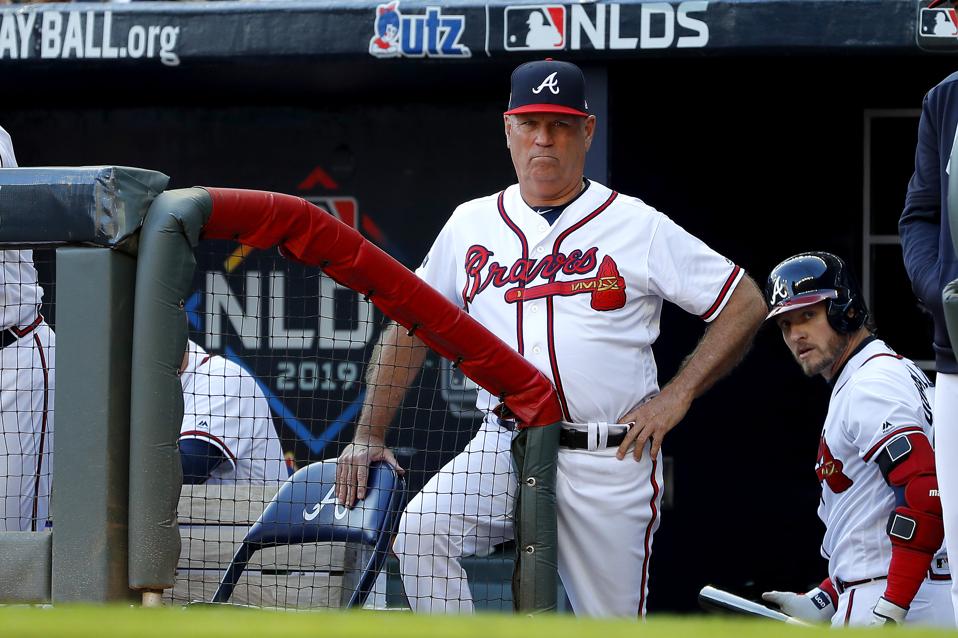 ATLANTA, GEORGIA – OCTOBER 09: Brian Snitker #43 of the Atlanta Braves reacts against the St. Louis … [+] Cardinals during the first inning in game five of the National League Division Series at SunTrust Park on October 09, 2019 in Atlanta, Georgia. (Photo by Kevin C. Cox/Getty Images)

In the middle of his scheduled media chat at the 2003 Baseball Winter Meetings, Bobby Cox was informed that his Atlanta Braves had just obtained a slugger — J.D. Drew — from the St. Louis Cardnals in a five-player trade.

“I’d love to have Josh back,” he said of free-agent third baseman Josh Donaldson, who hit 37 homers for the Braves in 2019, his only year with the club. “He’s one of those guys you grow attached to, what he brought, what he did for our club. Alex (Anthopoulos) has done a great job this season with what he’s already done.

“If we don’t bring Josh back, we’ll be fine; we’ll get the stuff we need somewhere else. It’s not as easy as wanting it – I know that.”

After playing under a $23 million contract that was the largest ever doled out for a single season, Donaldson wants a new deal that could hit $100 million over four years. That’s a big ask for a 34-year-old third baseman with an injury history. 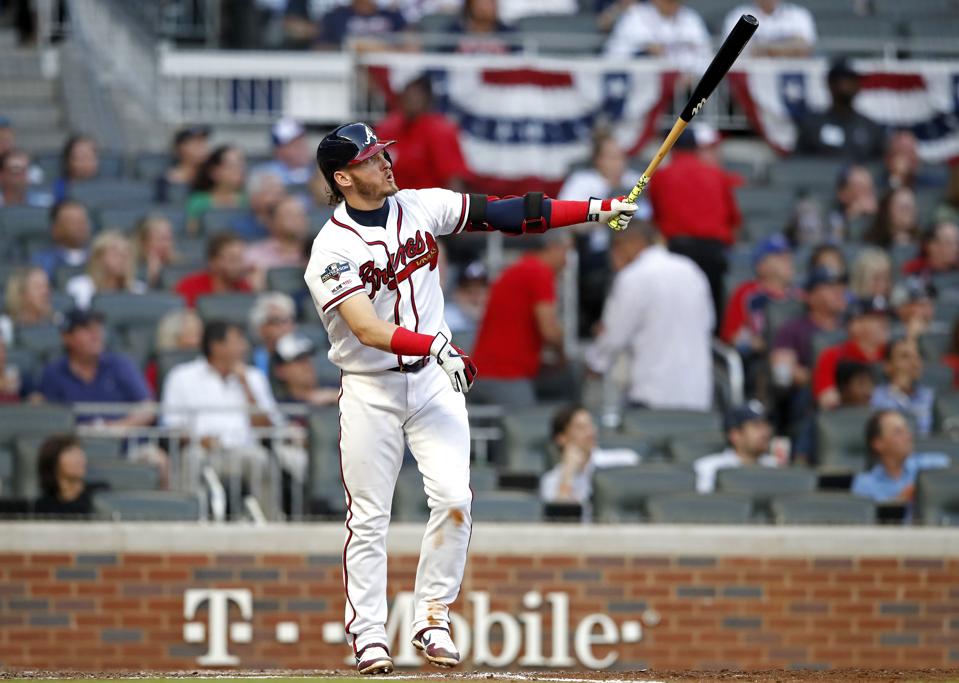 ATLANTA, GEORGIA – OCTOBER 09: Josh Donaldson #20 of the Atlanta Braves hits a solo home run … [+] against the St. Louis Cardinals during the fourth inning in game five of the National League Division Series at SunTrust Park on October 09, 2019 in Atlanta, Georgia. (Photo by Todd Kirkland/Getty Images)

On the other hand, his righthanded power is a perfect fit in the Atlanta cleanup spot behind lefthanded No. 3 hitter Freddie Freeman. Asked whether he’s talked to Donaldson, Snitker said, “I’ve texted him a couple of times but I would have done that anyway. He kind of grows on you. He’s a great player and a good man. I’m rooting for him no matter where he plays.”

That’s quite sporting for a guy whose biggest summer rivals, the Washington Nationals and Philadelphia Phillies, have turned into his biggest winter rivals too. Both want Donaldson badly, along with the Los Angeles Dodgers and Texas Rangers.

Should one of those teams out-bid the Braves, young Austin Riley stands next in line. He got off to a hot start last year but then fizzled with a flurry of frequent strikeouts.

“He’s going through growing pains that a lot of young players go through,” Snitker said, “Ozzie Albies had the same kind of situation (in 2018). It’s part of the learning process with a kid.

“He’s aware of it and is going to be working on it this off-season. When he gets to spring training, we’ll see how he fits.

“We love Austin Riley. I think his upside is huge. We saw what he can do in this league but you don’t surprise anybody for very long. He’s going to have to make adjustments as they all do.

“We’re very confident in his ability, his aptitude, his work ethic, everything he’s got going on. We look at him to be a special player for us at some point in time. I’ve got a lot of confidence in that kid.” 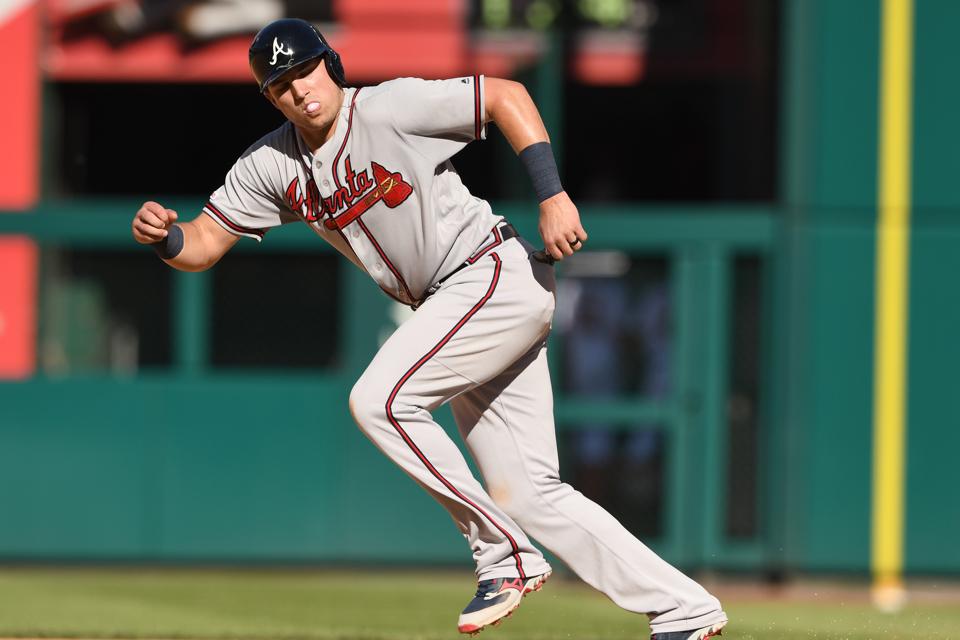 WASHINGTON, DC – SEPTEMBER 14: Austin Riley #27 of the Atlanta Braves leads off first base during a … [+] baseball game against the Washington Nationals at Nationals Park on September 14, 2019 in Washington, DC. (Photo by Mitchell Layton/Getty Images)

Riley, like Donaldson, has enormous righthanded power. He just needs to harness it by connecting more often. Now that Atlanta has bolstered both its rotation and relief corps, landing a power hitter to bat behind Freeman is the club’s top priority.

As Snitker explained, “We used to talk about that with Chipper Jones – trying to get somebody to hit behind him. I think it’s important. It will definitely make us a better team if we can do it.”

Since Brian McCann has already hung up his spikes, losing Donaldson could be a double whammy in the clubhouse. But the manager doesn’t think so.

“It’s a good clubhouse, a good corps of guys,” he said. “I don’t think losing one entity is going to make that much difference. The makeup of our club is an asset for us. Cole Hamels brings us great credibility too; he’s going to be great for our clubhouse.”

Hamels, a 36-year-old lefthander, inked a one-year, $18 million deal before the winter meetings. “He’ll be really good for our club, our starters, our young pitchers, the whole team,” Snitker said. “Adding a piece like that is really big for us. Same thing when we got Dallas (Keuchel) last year. Guys like that bring instant credibility. They were successful major-leaguers.

“Having Cole in spring training will be great. It’s terrific to have somebody we know is going to make all his starts. Our guys learned a lot (from Keuchel) last year; having another guy like that who knows how to do it and the steadiness of what it takes will be great for our club.”

Even with Hamels aboard, however, Snitker conceded that the team is still hoping to add another starter. But it won’t be Atlanta resident Zack Wheeler, who signed with Philadelphia, or Madison Bumgarner, a former postseason stud who hails from North Carolina. Wheeler’s five-year, $118 pact convinced Bumgarner to raise his price out of Atlanta’s comfort zone. 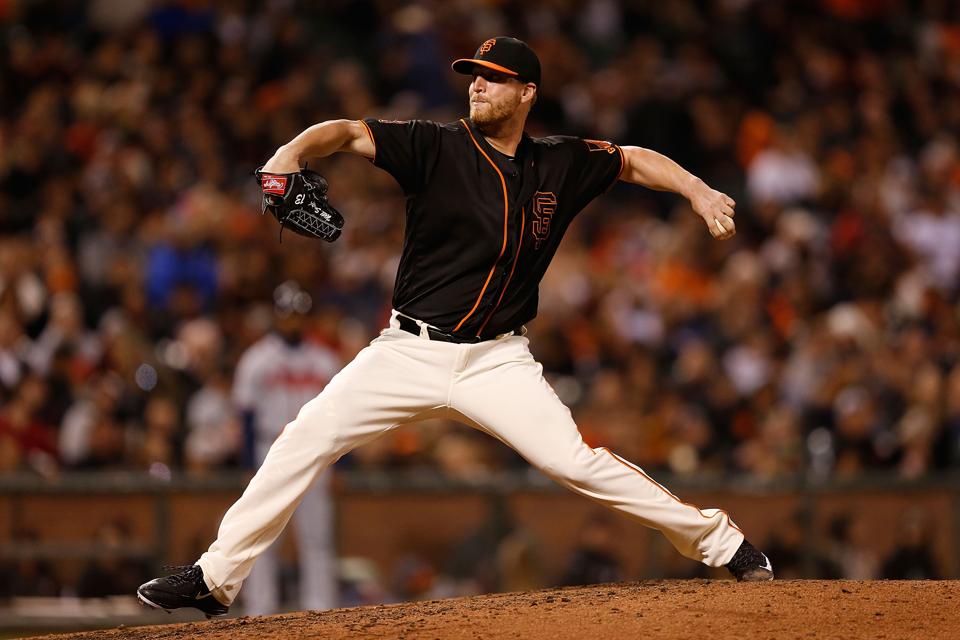 SAN FRANCISCO, CA – AUGUST 27: Will Smith #13 of the San Francisco Giants pitches in the eighth … [+] inning against the Atlanta Braves at AT&T Park on August 27, 2016 in San Francisco, California. (Photo by Lachlan Cunningham/Getty Images)

But Snitker is confident that his bullpen, once a weakness, has turned into a strength with the additions of Will Smith, a lefthanded closer, and the return of set-up stalwarts Darren O’Day and Chris Martin, who tested free agency. Also back are Mark Melancon and Shane Greene, acquired before the July 31 trade deadline, along with Martin, in 2019.

“Having pieces you can mix and match, especially over a long season, is so important,” the manager said. “It’s hard to go into your minor leagues and get depth like that. It will also give the minor-league guys time to mature more and gain experience.”

A 2020 rule change will change the way managers handle pitching changes. For the first time, relief pitchers will be required to face a minimum of three batters each.

To Snitker, “It will become our new norm. It’s something you’re always adjusting to in this game. The players do it, the managers and front office, we’re all making adjustments all the time to try to stay ahead.

“In this analytical age, there are a lot of new normals. It’s something that will be different, what we do, how we plan. Our guys are not match-up guys – they’re clean-inning pitchers. That’s going to go into the development of young relievers in the minor-leagues.

“Being a match-up guy is going to become a lost art. Every now and then you’re going to get a match-up you probably don’t want – and that happens anyway – sometimes you get backed into a corner and don’t exactly get a match-up that’s ideal. We’ll try to navigate through that.”

The Braves will also have to navigate through the 162-game season without suffering from the injury bug. Freeman had bone chips removed from his elbow, while Mike Foltynewicz had shoulder issues that sent him to the minors before he was able to reclaim his rotation spot.

“Freddie feels great,” Snitker revealed. “Last time I talked to him, he said he hadn’t felt that good in a long time. He’s probably going to be excited about his workouts this winter and coming into spring training. 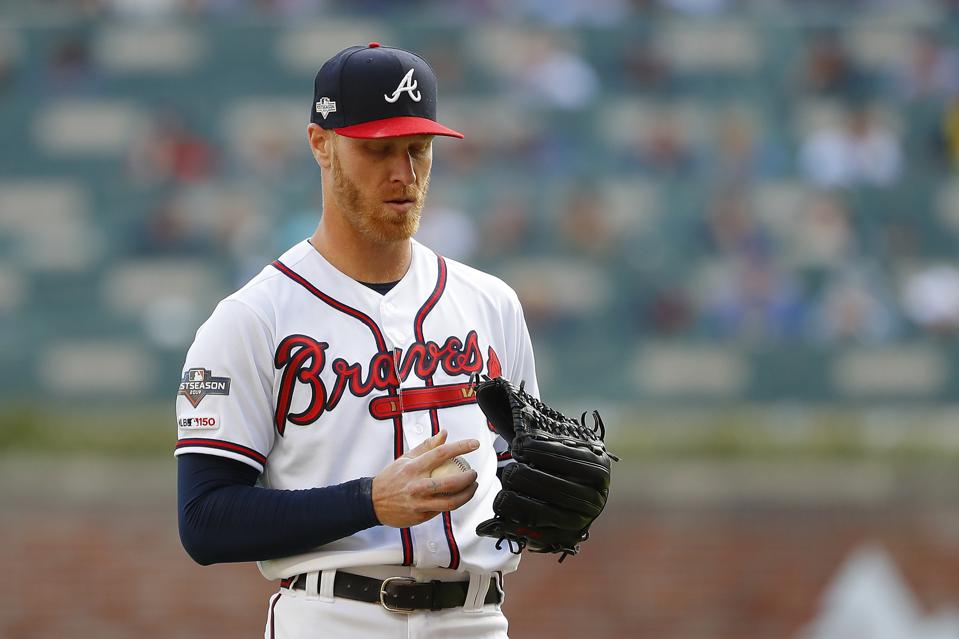 ATLANTA, GEORGIA – OCTOBER 09: Mike Foltynewicz #26 of the Atlanta Braves reacts after allowing a … [+] two-run double to Tommy Edman (not pictured) of the St. Louis Cardinals during the first inning in game five of the National League Division Series at SunTrust Park on October 09, 2019 in Atlanta, Georgia. (Photo by Kevin C. Cox/Getty Images)

“Folty is another one who feels great. He will be excited getting going, being healthy, and having a full spring training. That kid has tremendous upside. We’ll keep hanging with him. Every time they go through things like that, they cherish each day and become wiser and more appreciative of everything that have.”

Asked about that problem, Snitker said, “Guys have been trying to figure out an edge as long as we’ve been playing, whether it’s tipping pitches or getting advantages other ways. Some guys are better at it than others. I’ve never spent a lot of time with it.”