Breaking
How To Get Your Startup Business Off The...
How To Create A COVID Safe Construction Site
How to Make a Good First Impression at...
Why Now Is A Good Time To Start...
Here’s Why Texas Instruments’ Stock Growing Almost 2x...
LinkedIn’s 50 Best Startups To Work For In...
3 Marketing Mistakes Holding You Back From Hitting...
Is The Matter In Our Universe Fundamentally Stable...
Majority Support Covid-19 Price Controls Says New Brookings...
Reimagined Pan-Mass Challenge Approaches $41M 2020 Fundraising Goal
Is Bitcoin Poised To Bounce Back After Its...
These ‘Temporary’ COVID-19 Changes Will Become Permanent
How Will Our Mental Health Be Affected By...
Selling A Business During A Pandemic: When Talented...
Top 10 Digital Transformation Trends For 2021
Two Veteran Entrepreneurs Aspire To Clean Up America’s...
PPP Forgiveness Applications Are Opening Up. Should You...
Best Domain Registrar
Free Tech For Black Founders Initiative Saves Startup...
Home Business House Committee Requests Hearing With New Postmaster General To Address Mail Delays
Business

Amid an intensifying national debate on the potential expansion of mail-in voting in the 2020 presidential election, the House Oversight and Reform Committee has formally requested the newly-appointed postmaster general to testify at a hearing next month examining recent changes to U.S. Postal Service operations and “the need for on-time mail delivery during the ongoing pandemic and upcoming election.” 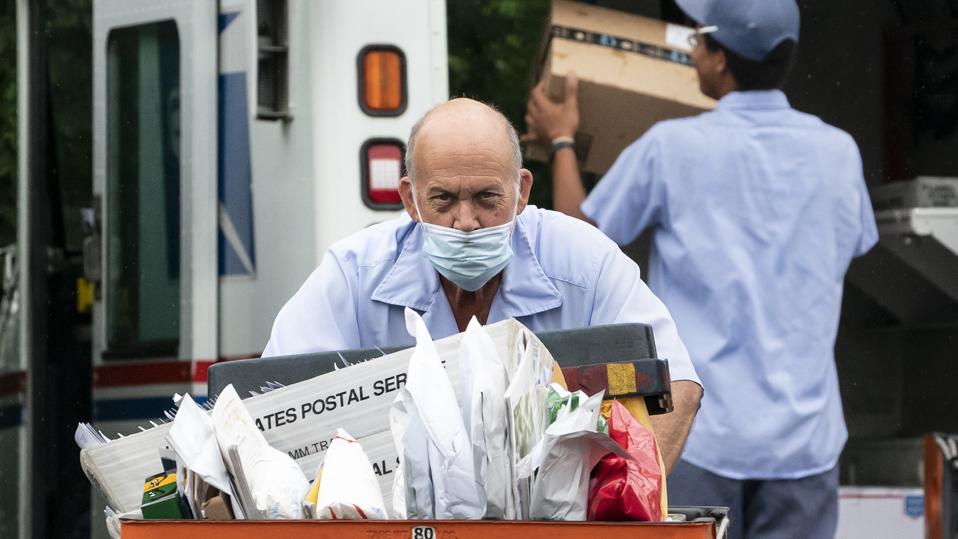 Letter carriers load mail trucks for deliveries at a U.S. Postal Service facility in McLean, Va., … [+] Friday, July 31, 2020. Delays caused by an increase in voting by mail may contribute to public doubts about the results. The public might not know the winner of the presidential race on Election Day because of a massive shift to voting by mail during the coronavirus pandemic. That’s because mail ballots take longer to count because of security procedures and laws in some states that limit when they can be processed. (AP Photo/J. Scott Applewhite)

Louis DeJoy, a Republican fundraiser who has contributed more than $1.2 million to the Trump Victory Fund, was named the nation’s new postmaster general last month.

DeJoy immediately announced an “operational pivot” within the Postal Service, which includes eliminating overtime for hundreds of thousands of postal workers and mandating late-arriving mail be left behind by carriers and delivered the next day.

Last week, four Democratic senators sent DeJoy a letter demanding he explains the changes he implemented that have reportedly resulted in delayed delivery times and a growing backlog that could potentially impact tallying mail-in ballots in November.

Chairwoman Carolyn Maloney (D-N.Y.) sent a letter to DeJoy on Monday requesting his testimony on Sept. 17, adding that the “committee staff has already confirmed your availability to appear at this new date and time” (the committee intended to have a hearing this week, but was told that DeJoy could not attend).

The Postal Service reported a $4.5 billion loss in the first quarter of 2020 and expects to lose more than $22 billion over the next 18 months, while Postal Service officials have warned they will run out of money by the end of September without help from Congress.

President Trump has declared that the 2020 election will be the “most inaccurate and fraudulent election in history” if universal mail-in voting is approved.

In addition to the $1.2 million he contributed to the Trump campaign, DeJoy has given millions more to Republican Party organizations and candidates, according to the Federal Election Commission. His appointment to postmaster general earlier this year provoked a prompt backlash from Democrats. “The idea that we would appoint and accept the appointment of a partisan political donor with no credentials … is reckless and irresponsible … and a stick in the eye by Trump to a service Americans count on every day,” Rep. Gerry Connolly (D-Va) told NPR.

On Sunday, the Nevada legislature, citing health concerns arising from the coronavirus, approved a bill that would automatically send mail-in ballots to all voters in the state. Trump characterized the legislation as “an illegal late-night coup” that would make it “impossible for Republicans to win the state.” He also threatened legal action to prevent Nevada from becoming the eighth state planning to send voters mail-in ballots.

“While these changes in a normal year would be drastic, in a presidential election year when many states are relying heavily on absentee mail-in ballots, increases in mail delivery timing would impair the ability of ballots to be received and counted in a timely manner—an unacceptable outcome for a free and fair election,” read the Committee on Oversight and Reform letter to DeJoy.

$25 billion: According to the Washington Post, bills approved by the Democratic-controlled House would set aside $25 billion for the Postal Service, but they remain stalled in the Republican-controlled Senate.