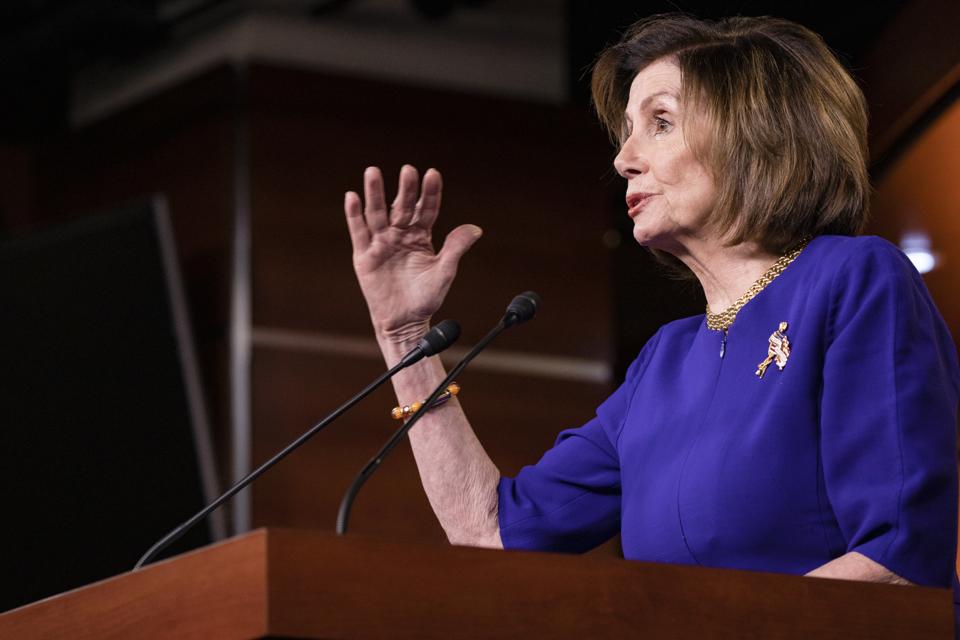 The outbreak of COVID-19 (commonly known as coronavirus) has created a global market downturn and raised the prospect that the United States could enter its first recession since the 2008 financial crisis. Last night, President Donald Trump and U.S. House Speaker Nancy Pelosi offered two competing approaches for securing both the health and economic security of the American people. While the president’s proposals would arguably do more harm than good, Speaker Pelosi and House Democrats should be commended for swiftly developing a comprehensive and serious plan to effectively tackle the crisis.

During the last recession, Speaker Pelosi passed a stimulus bill that used a combination of deficit-financed tax cuts and government spending increases to boost the economy. With interest rates on government debt now below projected inflation, many are calling for her to now take similar action. The problem is that commerce is currently being constrained by proactive measures people are taking to limit the spread of a pandemic, not a lack of money in consumers’ pockets. Additionally, the coronavirus has disrupted global supply chains, which no amount of demand-side stimulus can alleviate in the short term. A unique economic problem requires a unique solution.

The Families First Coronavirus Response Act authored by Pelosi and House Democrats offers a forceful yet targeted response that would strengthen Americans’ economic security while directly tackling the roots of the problem. For example, South Korea appears to have successfully controlled its outbreak through an aggressive testing regime that helped identify and isolate infected people. But because the Trump administration’s blunders have limited the availability of testing, we have no true sense of the size of the outbreak. Anyone could be infected, which means all Americans must take additional precautions with social distancing and self-quarantine measures that are limiting commerce. The House bill would move in the right direction by making testing for the coronavirus available to all Americans without charging them for it.

To reduce the spread of the virus, the House bill would require employers to offer workers up to 14 paid sick days and provide reimbursement for those with 50 or fewer employees to help them absorb the financial impact. For people who are sick for longer periods or must take time off to care for infected relatives, the bill also creates an emergency paid medical leave program that for one year would replace up to two thirds of a worker’s average monthly earnings (up to a maximum of $4000 per month for three months). These policies would discourage infected people from endangering their health and the health of those around them by continuing to work while sick.

The House bill would support people who lose their jobs during the outbreak by relaxing work-search requirements and other restrictions that may limit someone’s eligibility for Unemployment Insurance, which is particularly important at a time when public health officials don’t believe everyone should be going to work, and by providing states with additional funding for expanded benefits if their economies worsen. It would also support state governments by temporarily increasing the share of Medicaid paid by the federal government by 8 percentage points. This change will both help Medicaid treat infected patients and support state budgets that are likely to be constrained by falling tax revenue and increased spending on benefits.

Another big problem many families will face amid the closures of schools and workplaces is food insecurity. The House bill would expand the Supplemental Nutrition Assistance Program (SNAP) and other programs to support the over 20 million children who depend on free or reduced-price meals in schools. The bill would also suspend new work requirements for SNAP that the Trump administration set to take effect in April, which would be particularly draconian during a pandemic or recession in which work opportunities are limited.

All of these policies would ameliorate a specific problem created by the coronavirus pandemic and target support to people facing financial hardship. These are particularly effective forms of stimulus because low-income people are the ones most likely to spend rather than save any money they receive from the government.

President Trump, on the other hand, proposed a series of counterproductive restrictions on commerce and travel that sent market futures spiraling downwards. The only serious stimulus Trump called for was a temporary suspension of the 12.4 percent Social Security and 2.9 percent Medicare payroll taxes, half of which is paid by workers and half of which is paid by their employers. The non-partisan Committee for a Responsible Federal Budget estimated that such an extreme payroll tax holiday could cost $840 billion in 2020 alone, nearly doubling the federal government’s budget deficit.

Although there is a case for some deficit-financed stimulus given low borrowing costs, there are several reasons why Trump’s approach is the wrong one. Workers who are laid off or otherwise unable to earn a paycheck would receive no benefit from a payroll tax cut, while someone earning six figures would receive a tax cut more than double the size of what a median-wage worker would receive. Moreover, people are probably more likely to save than spend these tax-cut savings due to the nature of the coronavirus, and this would be even more true for the wealth.

If the crisis worsens significantly over the coming weeks, policymakers should look at broader measures to boost the economy in the form of direct cash assistance and/or spending on public investments. But at this time, the Families First Coronavirus Response Act represents exactly the right approach for policymakers to take. House Democrats are once again showing that, amid the chaos of the Trump presidency, they are able to lead with real solutions for the problems facing the American people.

How to Start Your Speaking Business

‘Fortnite’ Season 2, Week 4: Where To Scan A Henchman In Different Matches

Bitcoin Is Suddenly Back On The Move