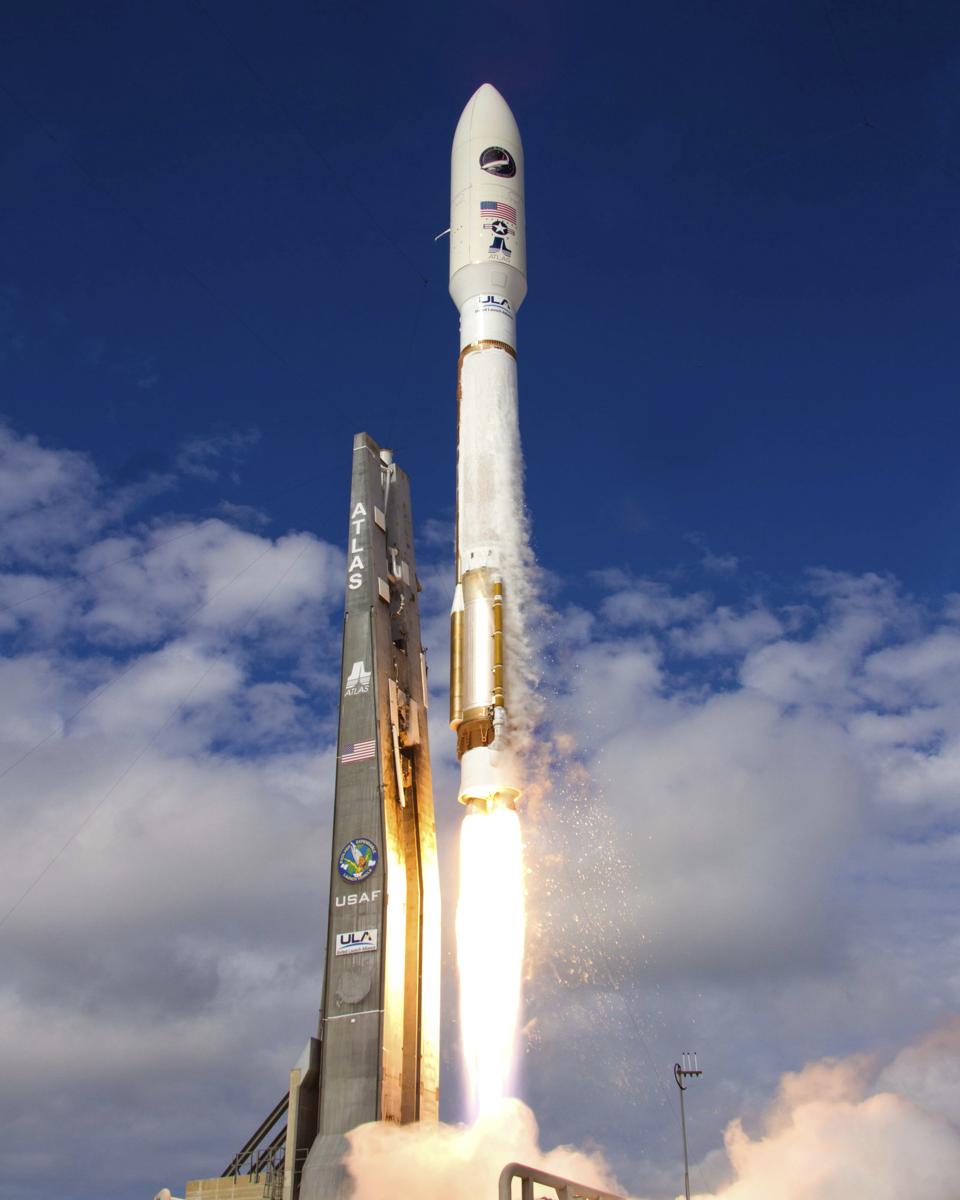 The Democratic-controlled U.S. House of Representatives just passed a $738 billion 2020 National Defensive Authorization Act in a 377-48 vote after arriving at a compromise earlier this week with Senate Republicans on a common draft. This follows more than three months of wrangling between the Senate and House Armed Services Committees on a small number of contentious issues.

Traditionally, the National Defense Authorization Act has involved relatively limited partisan warfare, but smooth sailing was not in the cards in 2019 as the Republican Senate and Democratic House sought to reconcile diverging bills.

Earlier this year, the House prevailed in establishing a $738 billion defense budget, instead of the $750 billion sought by Republicans. However, the current House-Senate compromise shows Congressional Democrats largely caving to Republican demands on military issues, in exchange for a few domestic concessions.

It’s official—the U.S. military will be getting a new ‘Space Force’ armed service built around the current Air Force Space Command. But for now, that force will look exactly like said command.

Space Force will remain subordinated to the Air Force in the same way that the Marine Corps is subordinated to the Navy. While that implies intertwined resources, it will nonetheless result in an independent service with its own four-star general on the Joint Chiefs of Staff.

The Pentagon heavily depends upon satellites for intelligence and surveillance missions, as well as relaying navigation data, communications and drone command-links. It also operates two X-37 unmanned space ships with application in both intelligence gathering and potentially offensive space missions. 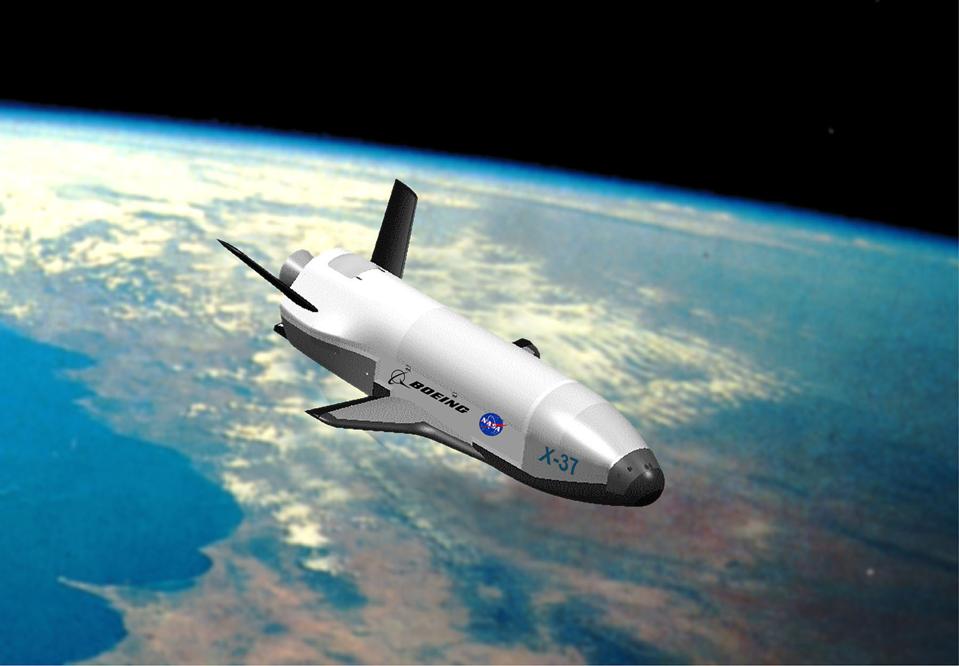 Currently the Air Force, Army and Navy all maintain separate space capabilities, though the Air Force is a clear leader. Critics of the Space Force concept argued it created new, unnecessary bureaucratic structures while lacking a tangible new mission. After all, the service as currently described is simply a re-named Air Force Space Command without any assets from the other services.

Proponents argued that a Space Force would allow a more concerted space-based strategy and ensure space capabilities receive the funding they need. How Space Force will actually be implemented remains very vague at present, however and the Congressional resolution remains more a promise to work out the details later than a complete package.

No Restrictions on Border Wall Funding

The House budget included language specifically forbidding military dollars from going to Trump’s border wall projects. This became a key bone of contention with the Senate. 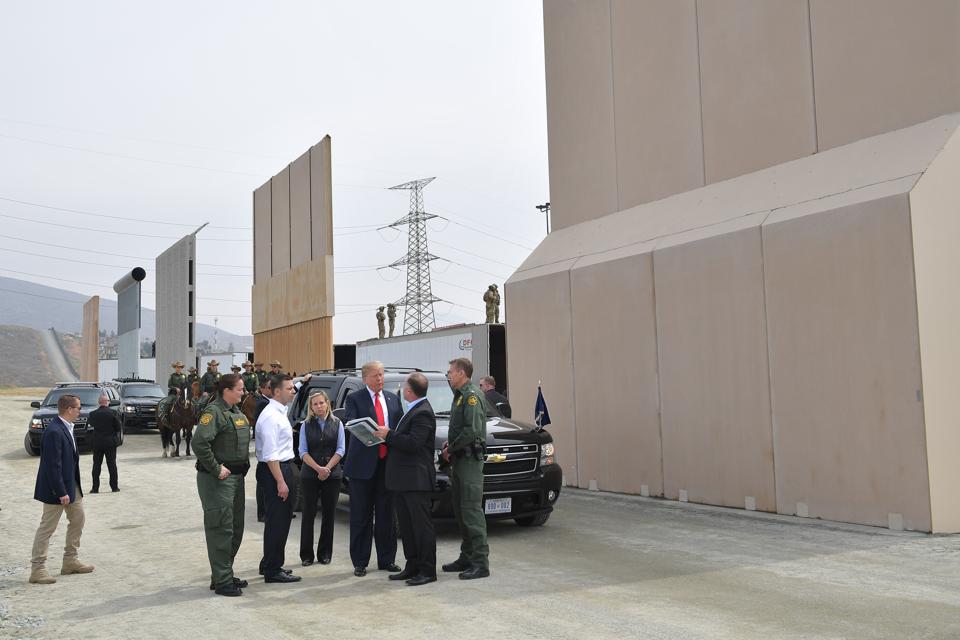 In a victory for Republicans, the compromise bill makes no mention of restrictions on using defense dollars for border wall funding. However, Senate measures seeking to add defense money to offset border wall allocations are also absent. 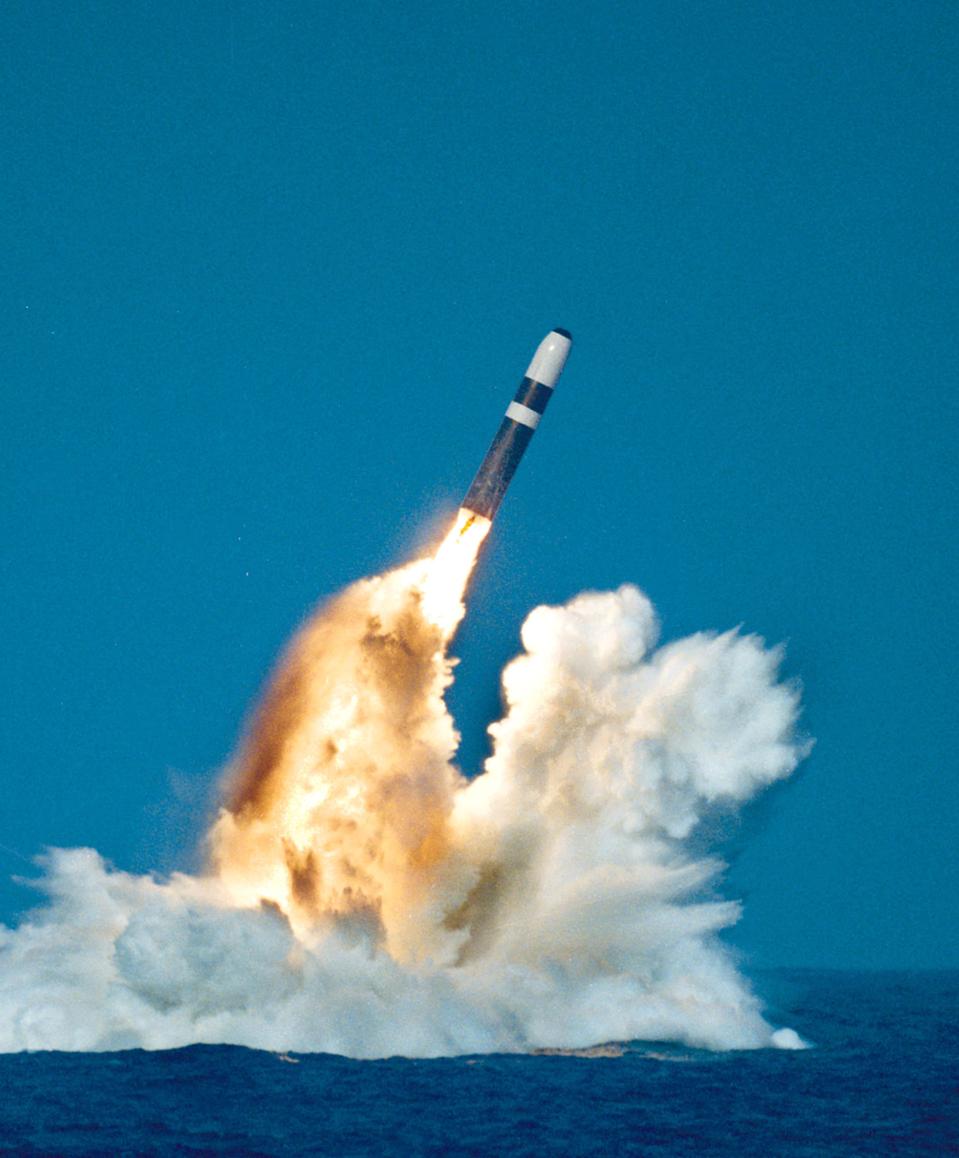 Undated File Photo: A Trident Ii, Or D-5 Missile, Is Launched From An Ohio-Class Submarine In This … [+] Undated File Photo. According To A Congressional Report To Be Released May 25, 1999, China Stole U.S. Nuclear Weapons Design Secrets Over 20 Years Through Espionage At Government Laboratories And Will Use The Information To Upgrade Its Own Arsenal. Among The Information Reported To Have Been Stolen, Was Details Of The W-88 Nuclear Warhead, Which Is Carried On The Trident Submarine And Described In The Report As “The Most Sophisticated Nuclear Weapon The United States Has Ever Built.” (Photo By Getty Images)

Tactical nuclear warheads are not limited by the New START treaty and Russia maintains a large stockpile of them.

Proponents of the new warhead, called the W76-2, argue the United States needs to increase and diversify its tactical nuclear weapon capabilities to be able to deter and possibly retaliate against Russia’s low-yield arsenal without resorting to large-yield strategic nuclear weapons.

Opponents argue that anything that makes nuclear weapons more ‘useable’ is a setback for the survival of the human race.

Democrats extracted all of their major concessions on domestic issues, notably Federal employees will now be guaranteed 12 weeks of paid parental leave.

Military service remembers are also receiving an across the board raise of 3.1%, exceeding an annual inflation rate hovering around 2%. Democrats also ended the ‘Widows Tax’ subjecting families of deceased service members to a financial penalty if they benefited from two different compensation programs. 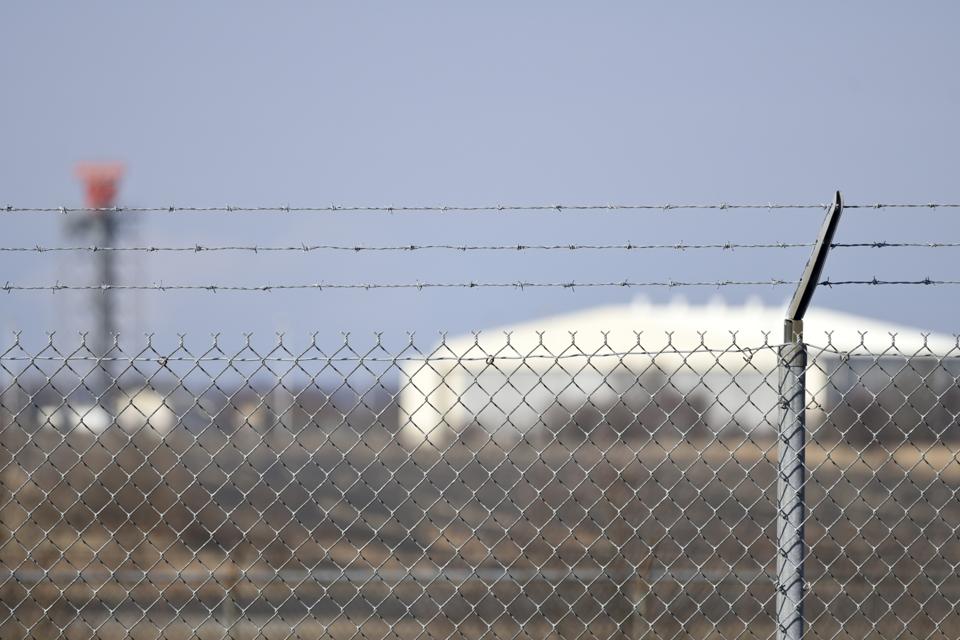 View on a part of the former Naval Air Station Joint Reserve Base Willow Grove, Montgomery County, … [+] Pennsylvania, USA on February 6, 2019. The United States Environmental Protection Agency (EPA) is expected to release updates on tests of per- and polyfuoroalkyl substances or PFAs pollution in public water supplies for 16 million Americans in 33 states, including Pennsylvania. The federal report is delayed due to January 2019 shutdown. Reps. Brian Fitzpatrick, Republican of Bucks County in Eastern Pennsylvania and Democrat Dan Kildee, of Michigan cochair a bipartisan task force in the House of Representatives, formed to take on the growingPFAS ContaminationCrisis. The usage of foam at nearby former military bases is linked to tainted drinking water, affecting tens of thousands of residents in Bucks and Montgomery Counties in Eastern Pennsylvania. (Photo by Bastiaan Slabbers/NurPhoto via Getty Images)

However, Republican successfully blocked a measure requiring cleanup of cancer-linked PFA fire-fighting chemicals that have contaminated housing on U.S. military bases, conceding only to forbidding continued use in firefighting foam.

The Pentagon will also expand visas to Afghan interpreters who risked their lives to assist U.S. forces in the field—a process slowed down by 60% due to new “extreme vetting” measures instituted by the sitting administration.

Scrutiny of Civilian Casualties Caused by U.S. and Saudi Bombing

The Pentagon is infamous for vastly under counting civilian casualties caused by its military operations by as much as an order of magnitude. A provision retained from the House Defense budget will require an independent investigation of civilian casualty reporting, as well as standardization of reporting methods and implementation of best practices to reduce casualties. 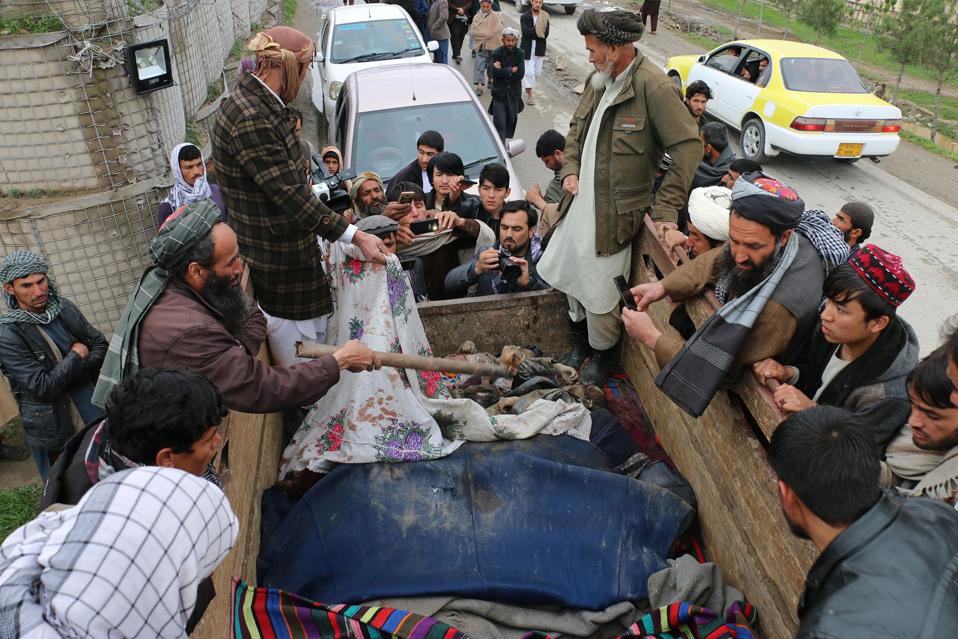 EDITORS NOTE: Graphic content / In this picture taken on March 23, 2019 Afghan men uncover the dead … [+] bodies of young children laying in the back of a truck, after being killed in an air strike in Kunduz Province. – At least 13 civilians were killed, mostly children, in an air strike by “international forces” in the northern Afghan city of Kunduz late last week, the United Nations said March 25. The United States is the only member of the international coalition in Afghanistan that provides air support in the conflict. (Photo by BASHIR KHAN SAFI / AFP) / GRAPHIC CONTENT (Photo credit should read BASHIR KHAN SAFI/AFP via Getty Images)

A separate measure requires Congress investigate civilian casualties in the Saudi war in Yemen, which has resulted in thousands of civilian deaths. Opposition to the Saudi war effort, which has been heavily supported with arms sales and direct U.S. military assistance (intelligence sharing, advisors and—until recently—aerial refueling support) is growing across the aisles in Congress. 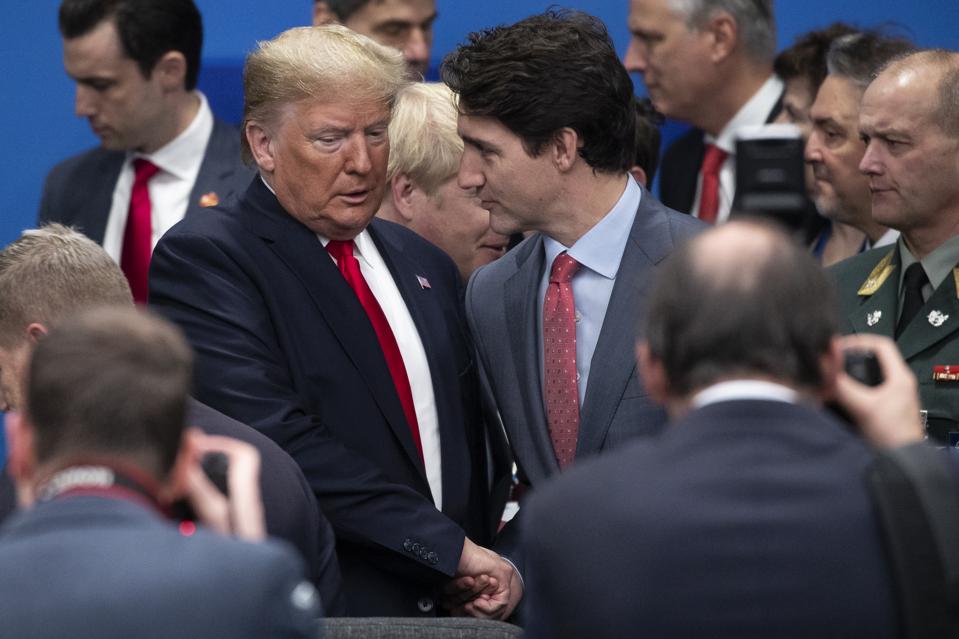 HERTFORD, ENGLAND – DECEMBER 04: U.S. President Donald Trump (L) ad Canadian Prime Minister Justin … [+] Trudeau (R) attend the NATO summit at the Grove Hotel on December 4, 2019 in Watford, England. France and the UK signed the Treaty of Dunkirk in 1947 in the aftermath of WW2 cementing a mutual alliance in the event of an attack by Germany or the Soviet Union. The Benelux countries joined the Treaty and in April 1949 expanded further to include North America and Canada followed by Portugal, Italy, Norway, Denmark and Iceland. This new military alliance became the North Atlantic Treaty Organisation (NATO). The organisation grew with Greece and Turkey becoming members and a re-armed West Germany was permitted in 1955. This encouraged the creation of the Soviet-led Warsaw Pact delineating the two sides of the Cold War. This year marks the 70th anniversary of NATO. (Photo by Dan Kitwood/Getty Images)

The bill also requires Trump give at least four months advance notice of he attempts to withdraw from the New START or Open Skies treaties designed to reduce danger of strategic nuclear competition with Russia. The White House has hinted it is considering withdrawing from both.

But Democrats also wanted to curb Trump’s ability to unilaterally start a conflict with Iran—as nearly happened this summer when a strike on Iran was ordered and then canceled at the last minute by Trump. 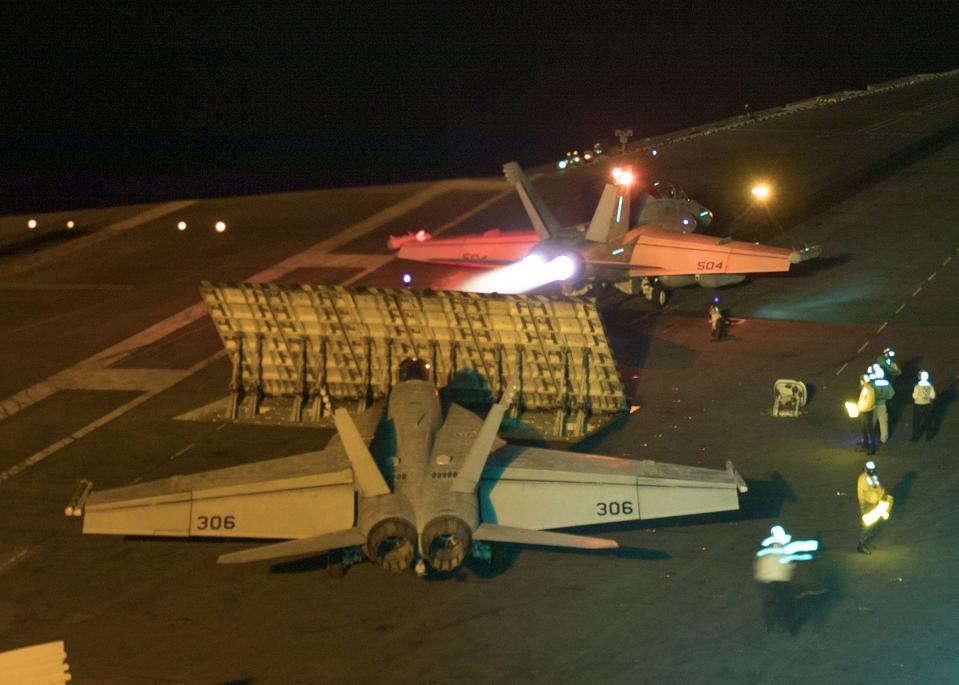 That included either repealing 2001 and 2002 Authorizations for the Use of Military Force (AUMF)—interpreted as giving a carte blanche for all kinds of military operations. An alternate proposed measure simply stated that the AUMFs could not be interpreted to authorize war with Iran, meaning such a conflict would require congressional approval.

Neither made it into the final bill. Nor did a ban on U.S. military support for the Saudi war in Yemen. Democratic hopes to reverse Trump’s ban on transgender military personnel—a demographic twice as likely to serve in the military as the population at large—were also defeated early on by Senate Republicans.

All in all, Senate Republicans got their way on most of the defense policy fights, while agenda items of progressive Democrats were completely traded away in exchange for the parental leave policy.

That amounts to a harsh blow to progressive aspirations to have a bigger voice on defense policy. Though left-leaning Democrats including senators Bernie Sanders and Elizabeth Warren oppose the bill, it is expected to easily pass when it comes to a vote in the Republican-controlled Senate.

Let’s finish by looking at two issues that weren’t’ subject to partisan controversy, but which do reflect disagreements between Congress and the military.

The Navy is introducing new Gerald Ford-class carriers and F-35C stealth jets simultaneously—but incredibly, the former won’t come out the gate with facilities to support flight operations by the latter. That’s because the new carriers have been plagued by such serious cost overruns and delays, the Navy attempted to cut budgetary corners by delaying integration of the F-35C in the 2020s, albeit at a higher cost. 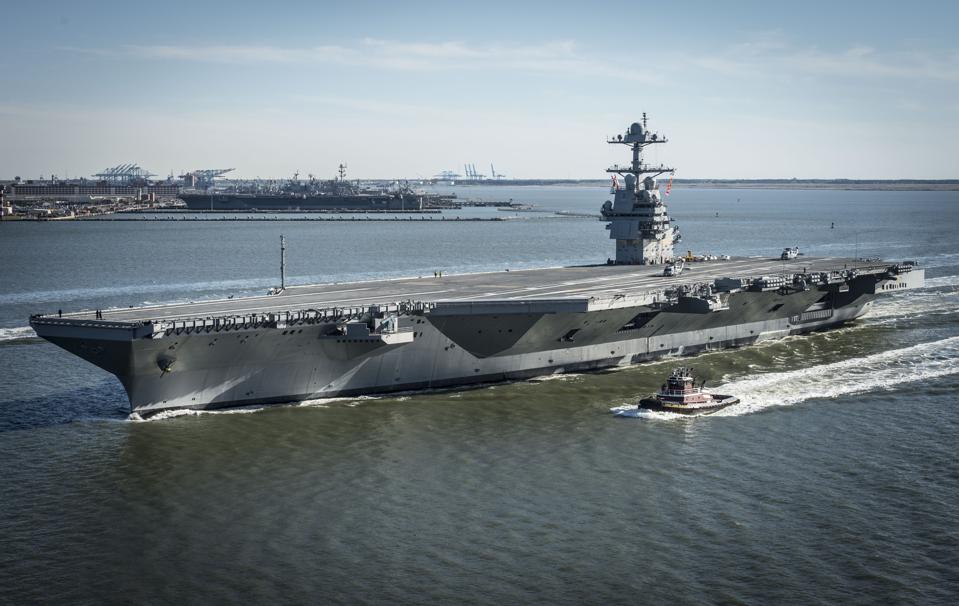 NEWPORT NEWS, VA – APRIL 8: In this handout photo provided by the U.S. Navy, the future USS Gerald … [+] R. Ford (CVN 78) is seen underway on its own power for the first time on April 8, 2017 in Newport News, Virginia. The first-of-class ship — the first new U.S. aircraft carrier design in 40 years — will spend several days conducting builder’s sea trials, a comprehensive test of many of the ship’s key systems and technologies. (Photo by Mass Communication Specialist 2nd Class Ridge Leoni/U.S. Navy via Getty Images)

This aroused the ire of Congress, which has required that the Navy make sure the newly launched John F. Kennedy does support F-35C operations before its first operational deployment. How the Navy will scrounge the funding to make that happen, however, remains unclear.

Congress is authorizing an order for eight brand-new Boeing F-15EXs, incorporating new technologies developed for export-models F-15 Block 60 and 70 aircraft. These multi-role jets are intended to replace the Air Force’s aging F-15C air superiority fighters. The first eight F-15EXs are intended to evaluate whether full scale procurement of 144 or more will follow in the 2020s. 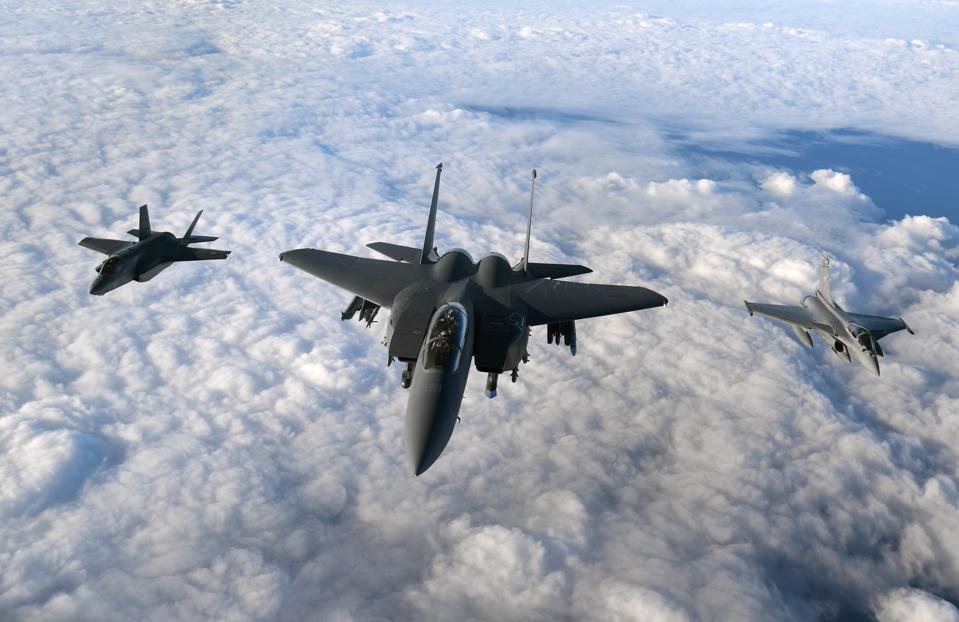 The new model of the classic twin-engine jet fighter appears to have a fly-away cost roughly comparable to the Lockheed F-35A Lightning stealth jet, but can fly faster, further and will likely be configured to carry much heavier weapon loads using new quad-racks. However, it will remain highly visible on radar.

Senior Air Force officials have long resisted efforts to procure new non-stealth jets, claiming they are excessively vulnerable to land- and air-launched anti-aircraft missiles. Proponents of the F-15EX argue that its better suited for missions where stealth is secondary, such as defensive air patrols (the F-15C’s main job), delivering long-range missiles or striking foes without high-altitude anti-aircraft defenses.

How Your Local Business Can Be a Helper