Breaking
How to Build a Sales Forecast Model
The Unexpected Ways COVID-19 Has Forever Changed What...
Google Posts: Conversion Factor — Not Ranking Factor
How To Bring Your Branding To Life
Coinbase Cofounders And Investors Poised To Rake In...
How To Stay Top-of-Mind For Your Audience With...
Employers: Eight Red Flags You May Not Notice...
The benefits of videoing in the automotive industry
Ted Lasso, Other Apple TV+ Shows Arriving Soon...
How To Incorporate Click And Collect Into Your...
What Are Working Capital Loans and When Should...
The 10 Biggest Trends in Entrepreneurship to Look...
Clubhouse Has Grown 10X In Two Months. Here’s...
Here’s Why Tyson Foods Stock Looks Undervalued At...
How To Maintain Client Relationships During Long Projects
WhatsApp Is Pushing Ahead With Its Controversial Privacy...
Home Business House HEROES Act Gets The Trade-Offs Wrong
Business 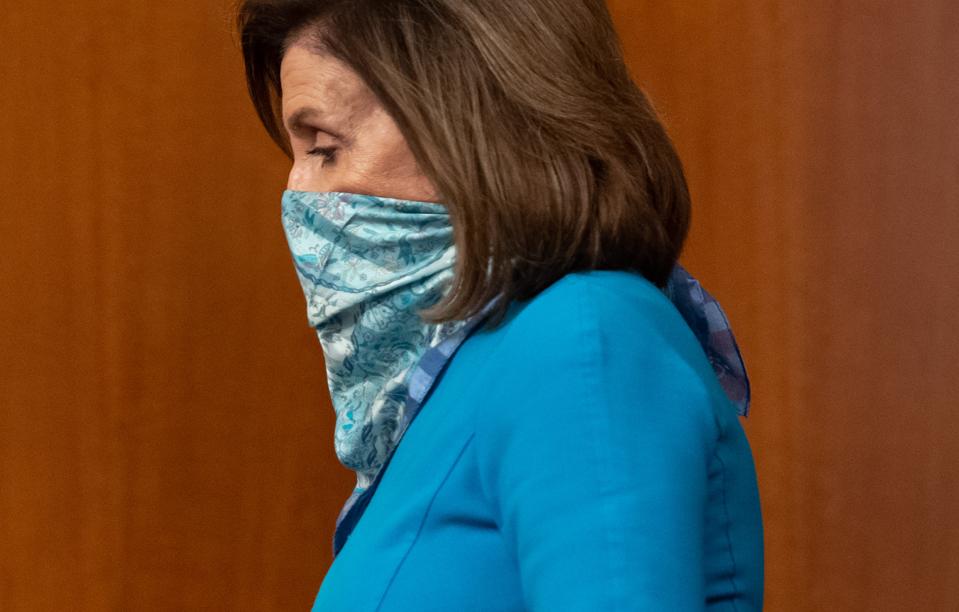 US Speaker of the House Nancy Pelosi arrives to speaks about the coronavirus pandemic during her … [+] weekly press conference at the US Capitol in Washington, DC, May 7, 2020. (Photo by SAUL LOEB / AFP) (Photo by SAUL LOEB/AFP via Getty Images)

The U.S. House of Representatives is moving ahead with plans to vote today on the Health and Economic Recovery Omnibus Emergency Solutions (HEROES) Act: the fifth – and potentially final – piece of major legislation addressing the coronavirus pandemic and its economic effects. The 1800-page bill is estimated to cost roughly $3 trillion and contains a mix of both good policies and bad, but is perhaps most notable for what it leaves out: automatic stabilizers.

The biggest flaw with previous relief bills was that aid was limited by the availability of funds appropriated by Congress or arbitrary calendar dates it chose instead of being based on the real needs of our economy. As a result, measures like the Paycheck Protection Program (PPP) were exhausted within three weeks and many eligible businesses couldn’t get needed financial relief until Congress took additional action. The best way to prevent this problem in the future is by adopting “automatic stabilizers” — policies that cause spending to rise or taxes to fall automatically as predetermined economic or public-health benchmarks are met. For example, a proposal by Congressman Don Beyer and Senator Michael Bennet would change the expansion of unemployment benefits included in the CARES Act to gradually phase out as the economy recovers instead of expiring arbitrarily on July 31st. The centrist New Democrat Coalition has also been vocal in calling on leadership to adopt automatic stabilizers in future relief bills.

Unfortunately, the HEROES Act doesn’t include any new automatic stabilizers – reportedly because House Speaker Nancy Pelosi is concerned about the bill’s $3 trillion price tag. On the one hand, Speaker Pelosi is right to be concerned about wasting taxpayer money on unnecessary expenses given our nation’s serious long-term fiscal challenges. But the unfortunate reality is that supporting our economy during the worst public health crisis of our lifetimes is a large and necessary expense. It is no less fiscally responsible to pass one $3 trillion bill than three $1 trillion bills if the money is efficiently targeted to support our economy throughout this pandemic. Moreover, there are a number of costly provisions included in the HEROES Act that are a poor trade-off for sacrificing automatic stabilizers.

One example of bad policy in the HEROES Act is how it extends temporary expansions of unemployment insurance benefits for an additional six months without a coherent strategy for eventually returning to normal levels. The CARES Act in March increased the maximum number of weeks a laid-off worker could collect benefits and boosted benefits across the board by $600 a week until July 31st, resulting in some receiving more income from unemployment benefits than they lost in wages. This policy isn’t a problem in the short term, as protecting public health requires temporarily preventing many people from working. But extending this benefit boost for too long could discourage people from returning to work even after the pandemic is contained and jobs become available, thereby slowing an economic recovery. On the flip side, creating a cliff that causes benefit expansions to expire altogether on January 31st – just 10 days into a potentially new presidential administration – creates a steep risk that benefits would suddenly be cut off prematurely.

The right approach is thus an extension of expanded benefits that lasts as long as it needs to beyond July 31st but gradually phases out before it can become a harmful post-pandemic work disincentive. Nobody knows for sure whether such an automatic stabilizer would cost the U.S. Treasury more or less in the short term relative to the extension included in the HEROES Act, but we know it would better meet the needs of our economy and thus would be more fiscally responsible.

The HEROES Act makes a similar mistake by specifically providing $875 billion to state and local governments (along with another $40 billion to U.S. territories and Native American tribal governments). Some federal support is certainly necessary: the decline in economic activity caused by the pandemic is causing sales and income tax revenues that fund these governments to plummet, while the resulting rise in unemployment is increasing the cost of safety-net programs they administer, such as Medicaid and unemployment insurance. But the amount appropriated in the HEROES Act greatly exceeds the $500 billion in additional federal support that the Progressive Policy Institute estimates would be needed between now and the end of 2021 to prevent cuts to essential public services under current economic projections. Given the uncertainty around the recession’s depth and duration, it is quite possible that even more support will be needed, but this is yet another policy that would be stronger if designed as an automatic stabilizer.

The HEROES Act also contains a number of other expensive policies that increase its price tag while providing far fewer benefits than the aforementioned automatic stabilizers. It would authorize another one-time payment similar to the one that the CARES Act gave to most American households with income below a certain threshold. Although this policy was a good emergency response when Congress needed to get money to people quickly amidst a rapidly worsening economic crisis, it isn’t particularly well-targeted: households that lose their incomes need far more than $1200 per person to pay their bills, while households fortunate enough to maintain their income at pre-crisis levels do not need any assistance at all. Other pricey provisions would provide even greater benefits to affluent households, including taxpayer subsidies for COBRA (which would cost taxpayers far more than expanding health-care coverage through the Affordable Care Act) and a two-year repeal of the cap on deductions for state and local taxes (SALT). Eliminating these three provisions would free up over half a trillion dollars that could be used to bolster automatic stabilizers without increasing the bill’s total cost.

Despite these shortcomings, the HEROES Act gets many things right. It would provide necessary funding to help states administer fair elections without jeopardizing public health, offer “hazard pay” for front-line workers, and provide student debt relief to economically distressed borrowers (a preferable alternative to proposals for blanket debt forgiveness), among other worthwhile policies. Additionally, the bill would expand the Earned Income Tax Credit and Child Tax Credit to provide support to low-income families – a particularly effective form of economic stimulus – and make technical changes to provisions in the CARES Act that disproportionately reduced taxes for wealthier businesses.

Perhaps the best that can be said about the HEROES Act, given its omissions and flaws, is that it is an opening bid for serious negotiations to craft a better-focused bill. Speaker Pelosi’s leadership should be commended and stands in stark contrast to Senate Majority Leader Mitch McConnell’s decision to “hit the pause button” on developing relief legislation at a time when what has already been done is far from sufficient. The HEROES Act has now set a starting point for the next round of pandemic assistance legislation, but congressional negotiators should work towards an improved bill that truly meets our current economic needs.

Gene Therapy Stocks Have Fallen Out Of Favor. Time To Buy?