Houston Rockets Go All In On Mike D’Antoni’s Vision 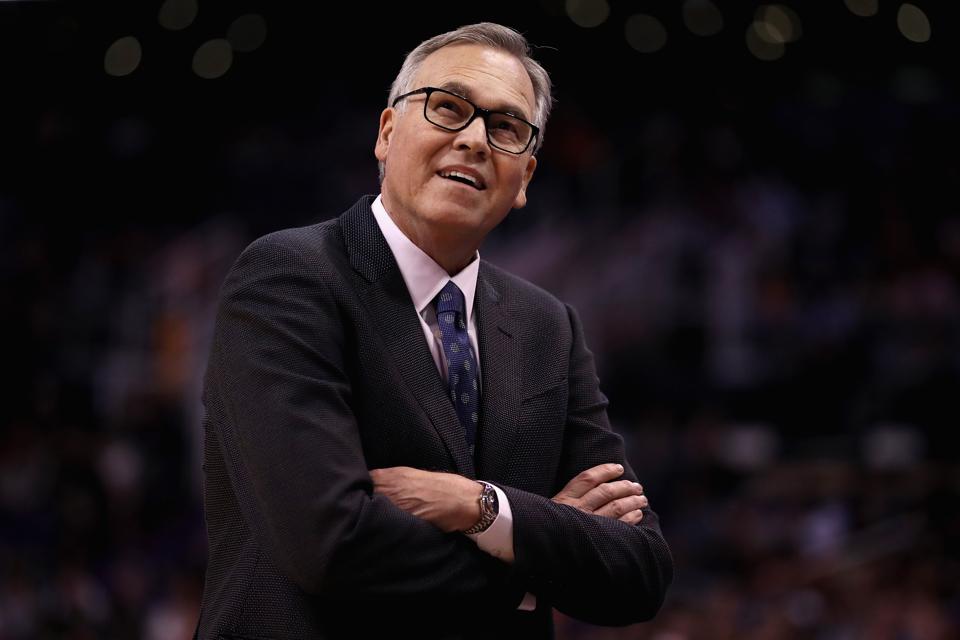 PHOENIX, ARIZONA – FEBRUARY 07: Head coach Mike D’Antoni of the Houston Rockets reacts on the bench … [+] during the first half of the NBA game against the Phoenix Suns at Talking Stick Resort Arena on February 07, 2020 in Phoenix, Arizona. NOTE TO USER: User expressly acknowledges and agrees that, by downloading and or using this photograph, user is consenting to the terms and conditions of the Getty Images License Agreement. Mandatory Copyright Notice: Copyright 2020 NBAE. (Photo by Christian Petersen/Getty Images)

Long before Mike D’Antoni joined the Houston Rockets, he had established a reputation as one of the most innovative minds in basketball. As head coach of the Phoenix Suns, he built a perennial contender, inspiring point guard Steve Nash to MVP levels, and constructing an attack that prioritized pace and space, in an era in which those concepts were foreign. He moved small forward Shawn Marion up to power forward, and power forwards Amare Stoudemire and Boris Diaw up to center, in unconventional roster constructions which were widely mocked at the time. Had circumstances swung differently, D’Antoni very well might have a title as validation.

On Thursday, at the trade deadline, the Rockets swung for the fences, making a move met with the same degree of befuddlement as those past ones by D’Antoni in yesteryear. The Rockets traded their 25-year-old homegrown starting center, Clint Capela, and a first round draft pick, in a multi-team deal which netted them defensive specialist Robert Covington.

It had been reported all season that the team coveted Covington due to his defensive prowess, but dealing off Capela in the acquisition proved to be a surprise. The center had anchored the team’s defense since the departure of Dwight Howard, and developed into a valuable lob threat for James Harden. His versatility enabled the switching scheme it utilized during its 2017-2018 run.

The disparity in the figures wasn’t too surprising upon close examination of the film and understanding of both player’s attributes and tendencies. Capela fit with Harden and Chris Paul because both guards could shoot, and the latter needed a pick and roll partner to thrive. Westbrook, on the other hand, thrives in open space, relentlessly attacking the rim off of escape passes from Harden or in single coverage. Capela, or the presence of any center who couldn’t space the floor, clogged things up for Westbrook’s rim attacks.

Indeed, Westbrook had completely turned his season around, averaging 31.4 points, 8.0 assists, and 7.7 rebounds per game on 51% shooting from the field in the thirteen games prior to the trade deadline. Houston’s best chance to win the title this season was to maximize Westbrook.

On Thursday, against a Los Angelos Lakers team that Houston will most likely have to go through to advance to the Finals, the Rockets got a taste of how things could look with their new lineup. Covington was a +16 in the box score, scoring 14 points, grabbing eight rebounds, and blocking two shots, hitting 4/7 on 3’s. He had an individual offensive rating of 129 points per 100 possessions, and a defensive rating of 100 points per 100 possessions.

Against another contender, and one with the game’s most dominant big man to boot, Rockets brass got a first hand look at the blueprint it envisioned when it swung the blockbuster deal. Westbrook erupted, again, for 41 points on 17/28 shooting from the floor, relentlessly punishing the Lakers’ smaller perimeter defenders with no interior defenders inside to help. And at the other end, Covington revitalized a swarming Houston defense which sent help defenders inside and aggressively rotated against ball handlers. The Rockets won, and for the game, only lost the rebound battle by one. What Houston lost in rim protection in trading Capela, they made up for with offense and perimeter defense.

On Friday, without Westbrook, Houston was blown out by a young Phoenix Suns team that erupted for 46 first quarter points. After the high of the Thursday win, the loss was a reminder that the trade left Houston vulnerable against certain matchups, particularly teams with athletic young guards. But Capela’s presence in the lineup wasn’t significantly impacting Saturday’s final score.

On Thursday, the Rockets got a glimpse of what they can be against the West’s best and what they hope to become consistently. D’Antoni got to do things his way, and now he’s pushed in all of the chips.

Is PNC Blocking Out Venmo Users?…And Other Small...