Breaking
Think Small: Timely Picks To Capture The Reawakening...
Patient Gets Covid-19 Swab Lodged In Her Lung...
Nine Signs You’re Not Being Effective During Your...
Chromebooks Can Now Run Windows 10 – Find...
Will Biden’s Tax/Benefit Plans Help/Hurt You And The...
This Fashion Brand Turned A Stripe Into A...
Shots In The Dark: Why Access To A...
What Building Wealth Really Takes In Business
Building A Circular Economy In New York City...
How To Cast Your Vote Against Election Scams
New Science On Stress: Feeling Your Feelings Works...
Why Now Is The Right Time To Acquire...
7 Obstacles That Prevent People From Starting Businesses...
Booking Holdings Falls; Likely To Remain A Risky...
Apple iPhone Crushes Samsung Galaxy In Important New...
Shape And Hold: How A British Entrepreneur Took...
Home Technology How 5G Will Create Opportunities And Challenges For The Robotics Industry
Technology

How 5G Will Create Opportunities And Challenges For The Robotics Industry 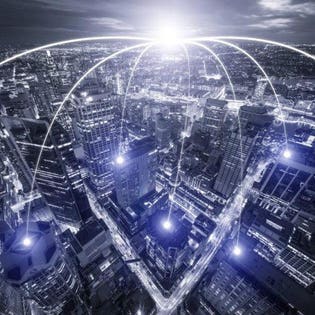 Thanks to recent advancements in electronics and the programmed logic that provides gadgets with an incipient ability to make decisions and take actions, humans are starting to have meaningful interactions with machines. We are on the cusp of a robotics Golden Age, which I believe will increase our standard of living to the degree that mass production, electricity and transistors did for our ancestors.

The term “smart manufacturing” refers to business processes that feature machines in decision making roles. Artificial intelligence (AI) provides the decisions, and machine learning (ML) enables an ongoing refinement of those decisions based on zettabytes of data that the internet of things (IoT) makes available to a global network of devices.

Improvements in computer networking technologies are key to realizing autonomy among collaborating devices, cooperative productivity featuring little to no direction from human operators. To that end, the International Telecommunication Union Radiocommunications sector (ITU-R) has issued its recommendations for a fifth-generation standard of cellular networking technologies. Known in general as 5G, this latest set of radio frequencies, base stations and connected devices promises to surpass the performance of fourth-generation cellular (4G or LTE) by offering:

• Speed advancements: Going well beyond the elimination of wait times for file buffering, data is starting to speed across networks that will enable large files and high-definition videos to arrive at their destination in an instant.

• Decreases in latency from 100 milliseconds to 1 millisecond: Networked devices will communicate with delays minimized to the point of being almost indistinguishable from real time.

• Improves power efficiency for mobile devices: All those speed advancements and latency decreases will, in turn, allow much of the processing that currently takes place on battery-powered smartphones and tablets to be offloaded to network-attached servers, without any diminishment in user experience.

• Network slicing for flexible service delivery: Network operators will be able to create and deploy customized slices of network infrastructure based on the needs of each specific customer.

During the next several years, the development of mobile applications will shift toward satisfying demands from users connecting to the next generation of high-speed networks. I believe tomorrow’s leaders in the market for mobile software will offer products that enhance the experience for 5G use cases that include:

• IoT: A recent Gartner survey indicates that among the 66% of organizations planning to deploy 5G infrastructures by 2020, a main driver of their strategy is IoT.

• Smart cities: With their millions of sensors working and sharing in real time, 5G networks will make the creation of smart cities more feasible.

• AR/VR: The superior networking capabilities of 5G will allow augmented and virtual experiences to become mainstream for users of instructional and entertainment applications.

• Healthcare: Users will have access to wearable health monitors, as well as remote consultations, diagnoses, autonomous vehicles dispatched for emergencies and even robot-assisted medical procedures.

With real-time networking available through 5G technologies, manufacturers can connect their labor-saving devices to a cloud-based infrastructure of computational power and IoT communication. Taken a step further, the concept of a conscious factory can enable entire production lines to relocate based on the needs of producers who seek to minimize costs by renting more of their infrastructure as part of an on-demand supply chain.

Challenges For 5G To Overcome

While carriers and service providers are already deploying 5G networks for consumer use, there remain challenges to which stakeholders on both ends of the connection must rise:

• Security: Quite simply, the projected increase in connected devices will bring a corollary increase in potential attack vectors. Until hardware manufacturers and software vendors consolidate standards and create a more mature ecosystem, consumers must make an extra effort of due diligence during procurement and patching procedures.

• A proliferation of towers: Compared with earlier generations of cellular networking technologies, 5G towers emit higher radio frequencies of shorter wavelength, which enables greater data throughput at the expense of a more limited range of coverage. For now, service providers are attempting to offer full coverage through increased numbers of base stations and the extension of 5G licenses into lower frequencies.

• Cost: The expense of installing and maintaining more base stations will be significant, and will minimize the savings that end users of such wider shared bandwidth can expect until economies of scale, automation and service rate competition combine to reduce those passed-on costs.

• Politics: Mercantilism and intrigue are already interfering with 5G network deployments, a nontechnological challenge for which the remedy is grounded in greater market freedoms that encourage consumers to be the ultimate regulators by way of patronage or boycott.

Industry insiders expect the new 5G standard to become viable as a commercial option in 2020. Businesses and residents of cities with a developed cellular infrastructure will be first to experience the benefits and competitive advantages of 5G, and IoT progress will become tied very closely with this latest generation of cellular networking. As we saw with 4G and LTE, 5G promises to improve the experience of both personal area networks (PANs) and the wide area networks (WANs) that connect us with each other and with billions of our devices.

How to Get More Organic Traffic Without Doing Any SEO (Seriously)