Breaking
How, When And Where You Can See A...
New $2.2 Trillion Stimulus Bill Proposed—$1,200 Stimulus Checks,...
Why Do We Do What We Do? Manipulating...
California Brand Goes All-American As Amazon Bans Foreign...
The 3 Best Analytics Companies of 2020
Senator Cory Booker: Supporting Small, Minority-Owned Businesses Will...
Trump’s Taxes Are Finally Leaked—What’s Next?
Washington Heats Up Ahead Of First Presidential Debate:...
Systemic Racism Leads To Disparities In Nursing Home...
The New Regular: Prepare For Conflicts Of Customer...
Web VR.0 – Have VR Websites (Finally) Arrived?...
This Next Evolution Of Ecommerce Did $18 Billion...
IRS Taxes Most Lawsuit Settlements And Exact Wording...
13 Questions To Answer Before You Die
Just Launched: Long-Term Stock Exchange For Companies Building...
How To Make Your Savings Work Harder For...
Home Technology How Bike Lanes Are Transforming Paris
Technology 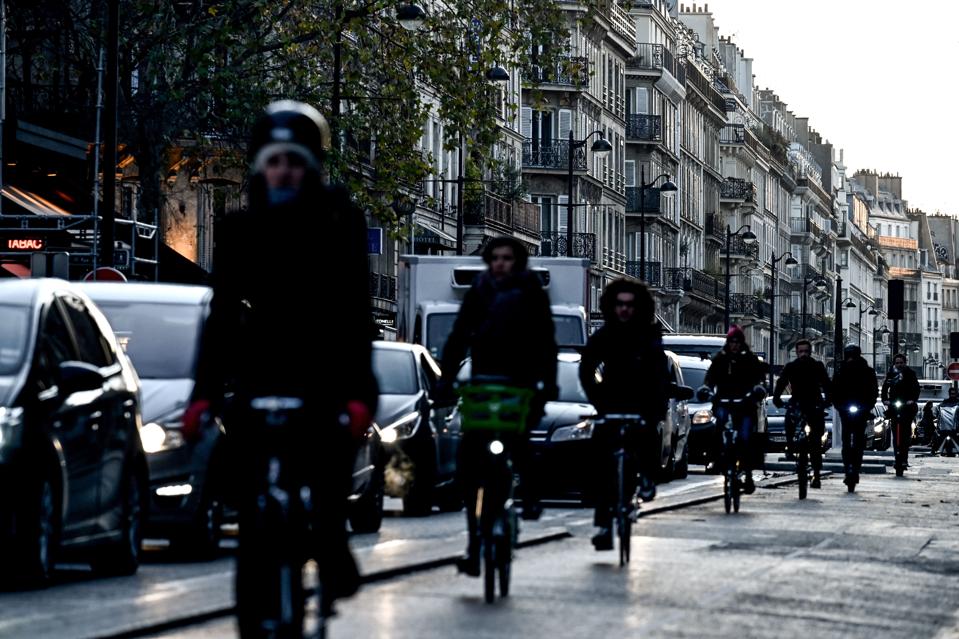 People ride bikes as vehicles queue early morning in central Paris on December 10, 2019 on a sixth … [+] day of massive strike action over government’s plans to overhaul the pension system. – Unions have vowed to keep up the fight over the reforms, which are set to be finalised and published on December 11. Another mass demonstration is planned in Paris and other cities today, with teachers and other workers once again expected to walk out alongside transport workers. (Photo by Philippe LOPEZ / AFP) (Photo by PHILIPPE LOPEZ/AFP via Getty Images)

It remains to be seen whether Paris Mayor Anne Hidalgo will achieve all 870 miles of bike lanes by next year promised in her Plan Velo, but Parisians are already pedaling in droves on those that have opened.

“In one year, bike use in the French capital is up 54 percent,” said François Picard, the host of “The Debate” on France 24, citing a road survey conducted by the mayor’s office.

“It’s the culmination of years of growing restrictions on cars, the introduction of bike-sharing services, and most recently the construction of bike lanes across the French capital.” 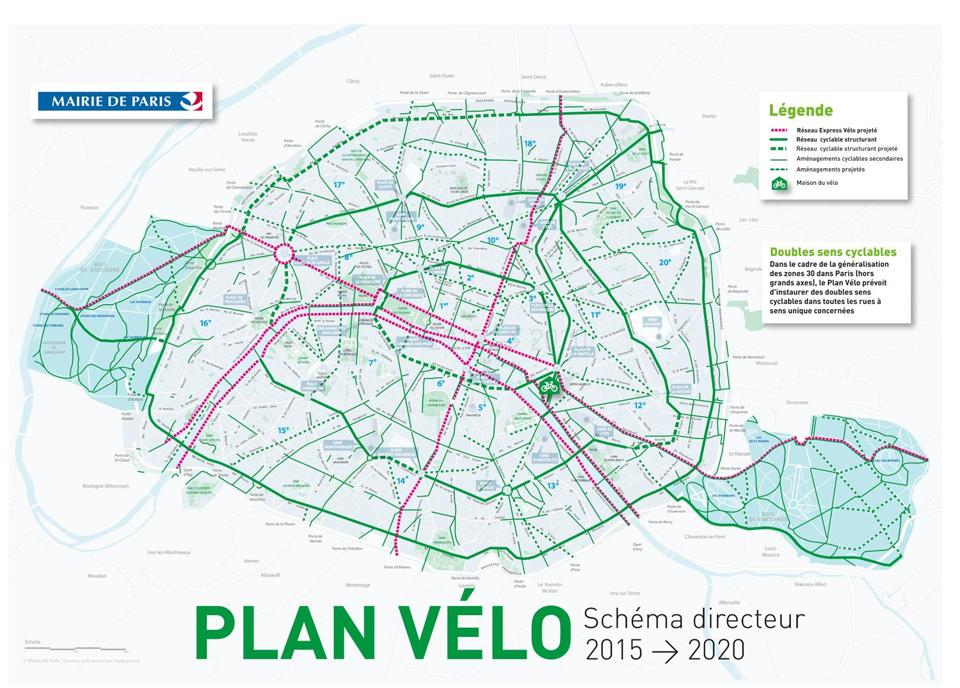 In Ile-de-France—Paris and its suburbs—bicyclists now take 840,000 trips per day, according to a recent study, surpassing motorcycles and scooters. Car trips remain much higher at 14.8 million but have dropped 5 percent since 2010.

And bikes may soon displace many more cars in Ile de France.

Next month Collectif Velo Ile de France, an alliance of bicycling associations, will unveil details of its plan to extend the Parisian network throughout the city’s banlieues. 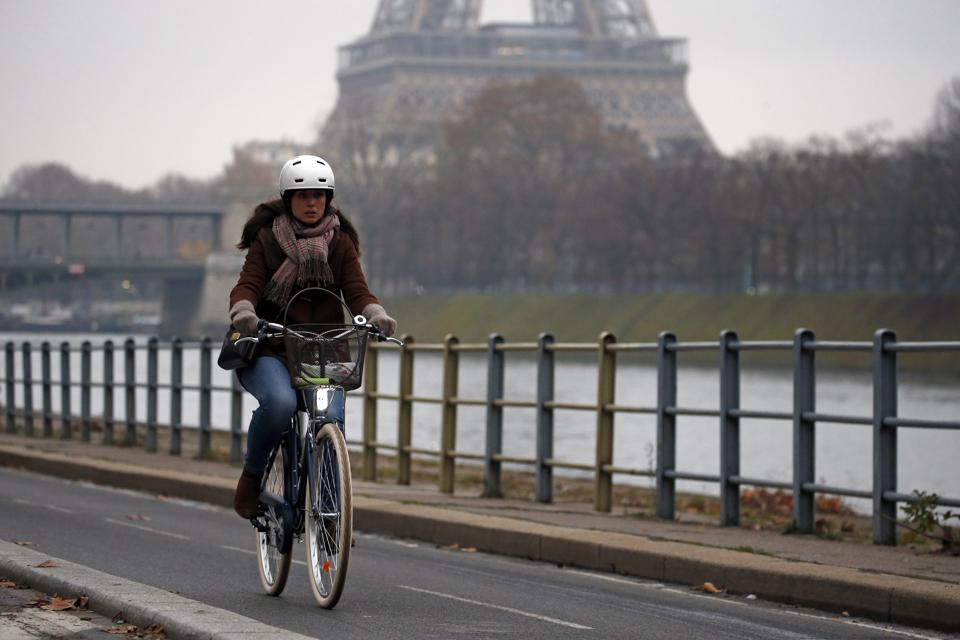 A Parisian uses a bicycle near the Eiffel tower to get around the city. (Photo by Chesnot/Getty … [+] Images)

“The idea of all these bicycle associations in and around Paris is to create a bicycle network that would put every one of the 12 million inhabitants of the Paris region at a couple of kilometers, a couple of minutes of biking, from this bicycle network, so that they can discover this experience: ‘Hey I have a network, another transportation system that can take me somewhere,’” said Stein Van Oosteren, spokesman for the collective, in an appearance this month on Picard’s program.

Most French think of bicycles as objects for sport or leisure, Van Oosteren said, but only because they’ve never had a network where they could safely use them as a means of transportation.

“What you’ll see is that as soon as you create a network, everyone starts riding on it.” 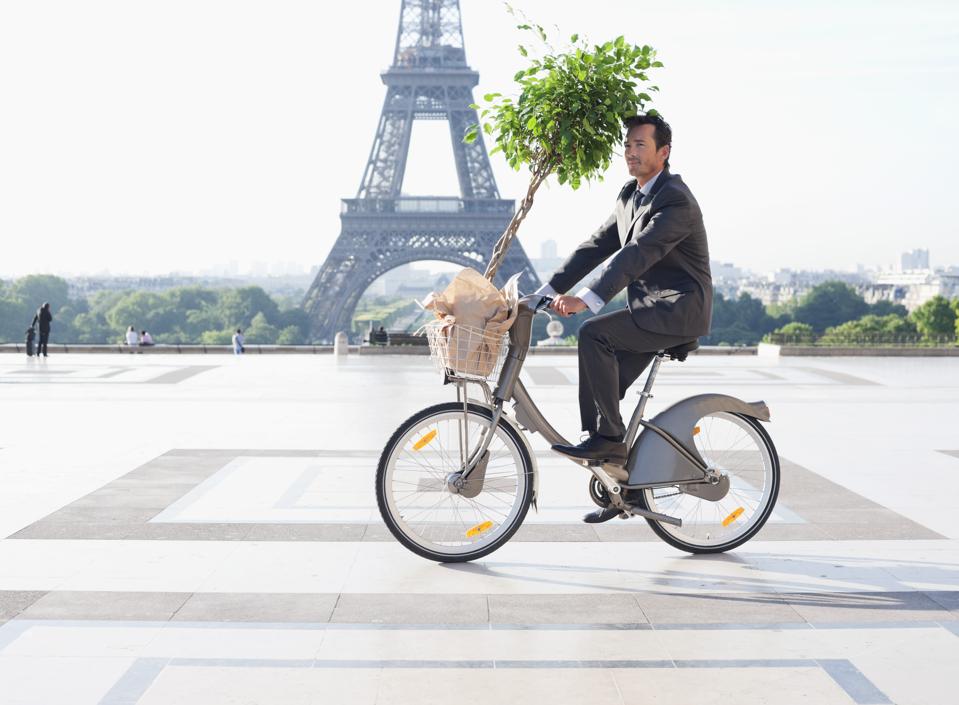 Paris jumped this year from 15th place to 8th on Wired’s list of the 20 most bike-friendly cities, closing in on France’s second-largest city, Bordeaux, which sits in 6th place.

Hidalgo’s Plan Velo has faced opposition from the oil and automotive industries, from disgruntled motorists and from Parisians weary of so much construction. But the cones de signalisation are disappearing now, and new lanes are opening in time for the city’s 2020 election.

“The elections are coming up and we’re starting to see the changes finally, because it’s true that Paris has been this massive construction site for months, for almost years now, and finally it seems like things are starting to work,” said Florence Villeminot, host of France 24’s French Connection.

“So people are starting to see that she had a plan this whole time and it wasn’t just about, you know, stopping people from getting around.”

Villeminot said that none of her friends who live in Paris own cars, a big change from 10 to 15 years ago. That change has come in part, she said, because cars are expensive and more difficult to use in the city, and in part because bicycling has become so much easier and safer.

“The landscape in Paris has really changed over the last couple of years. It’s become a lot more bike friendly, all these new bike paths springing out of the ground like mushrooms,” she said. “You can go down these paths that are actually separated from the cars. Those are the real nice ones because they’re safer. You don’t have to deal with any kind of traffic.”

Watch the France 24 Debate’s non-debate on the transformation of Paris: