Breaking
ESG Metrics: A Path Forward For Companies
‘Moriarty The Patriot’ Makes A Hero Of Holme’s...
Mind The 99 Year Gap: How To More...
The WFH Revolution: How Covid-19 Is Changing The...
eToro Announces Staking For Cardano And Tron
Fintech Startups: Plan For Your Customers’ Emotional Realities
The End Of Third-Party Data — Finally
The Scientologist Billionaire Trying To Make A New...
Mission-Driven Fintech Kontist Shakes Up The Future Of...
What Can The Simple Fact That ‘We Exist’...
Stock Market: Here Comes October With Scary Tricks...
Farmers, College Students, And Food Banks Across The...
Thinking Of Writing A Book To Grow Your...
Microsoft Security Report Highlights New Sophisticated Threats From...
3 Steps To Help You Build Entrepreneurial Confidence
SMB Fintech Darling Kabbage To Be Acquired By...
Home Finance How Bitcoin May See An Unexpected Boost From A DeFi Token Bubble Burst
Finance 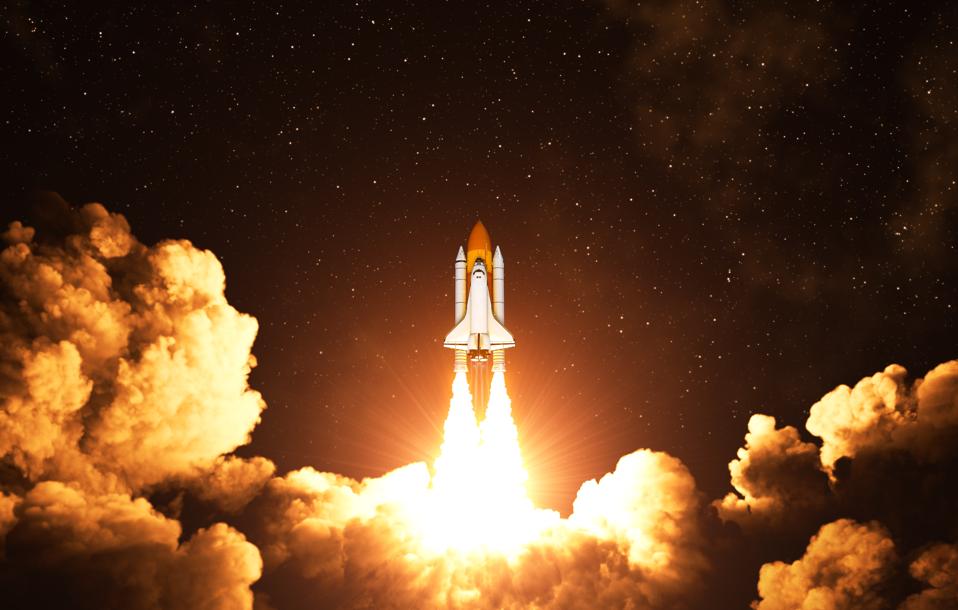 Decentralized finance—better known as “DeFi”—has become a buzzword in the cryptocurrency industry over recent weeks. Migrating financial services to a decentralized platform has been viewed by many as a killer use case for cryptocurrency, specifically Ethereum.

According to data provider DeFiPulse, the cumulative value of tokens locked in DeFi applications has surged from $1 billion on Jun. 15 to $1.65 billion on Jun. 26—growth of 65% in eleven days.

Simultaneously, the prices of tokens related to this cryptocurrency sector have seen rapid growth.

Taha Zafar, a crypto analyst, shared the table below on Jun. 18, showing Bitcoin’s performance in comparison to DeFi tokens such as Aave (LEND), Kyber Network (KNC), and Maker (MKR).

The data indicates that while Bitcoin is up 80% in the past three months, DeFi tokens have done even better, registering performances in excess of 100% over that same time frame. 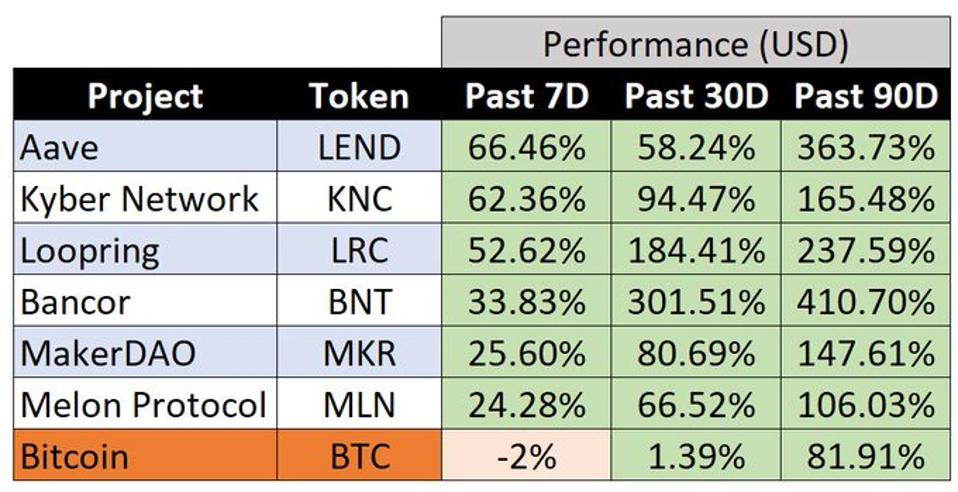 Bitcoin vs. DeFi-focused tokens over the past 90 days. Data current as of Jun. 18.

Although DeFi is still in vogue, analysts expect Bitcoin to experience a rally once this cryptocurrency market segment undergoes a necessary correction.

How DeFi Can Boost Bitcoin

After surging by over 150% from March’s lows, Bitcoin has stalled in the $9,000s. Since early May, the leading cryptocurrency has traded in a tight range from $8,500 to $10,000, barely deviating from these levels.

The chart below from crypto trader Josh Rager depicts Bitcoin’s lack of momentum.

Chart from Josh Rager, a crypto trader and a co-founder of Blockroots

It’s a much different story for DeFi tokens, which have strongly outperformed Bitcoin over recent weeks as shown in the table above.

Even today, on Jun. 26, CoinMarketCap reports that six out of the ten best-performing cryptocurrencies in the top 100, are DeFi focused.

Yet the higher these tokens rally, the more Bitcoin could gain once DeFi goes through a correction.

Kelvin Koh, a partner at cryptocurrency advisory and investment fund Spartan Group, observed on Jun. 9 that once “smaller altcoins” reach valuations that are deemed frothy by investors, Bitcoin will experience strong capital inflows. Referencing the strength of tokens such as MKR, LEND, and their contemporaries, Koh said:

“We have seen a major re-rating in many of the smaller altcoins (esp DeFi ones) in the past 4-5 weeks while BTC has been range bound. At some point, the valuation of these alts will start to look frothy and the capital will flow back to BTC.”

This comment was echoed by a pseudonymous Bitcoin trader, who said that Ethereum and Bitcoin could see a “small pump” when “it”—referencing the recent DeFi bubble—“all comes crashing down.”

This sentiment is based on the fact that most smaller altcoins trade against Bitcoin or Ethereum, not the U.S. dollar. That means that if traders want to realize the unrealized profits they made on altcoins, they will need to acquire either Bitcoin and/or Ethereum.

And with data site DeFi Market Cap indicating that the cumulative value of all DeFi tokens is now in excess of $6.5 billion, these tokens retracing even by 10-20% could correspond with millions of dollars worth of capital flowing into Bitcoin and Ethereum.

A Bubble Waiting To Pop

The growth of DeFi as of late can largely be attributed to two trends: support of blockchain-based finance projects by crypto exchange Coinbase and the launches of two new DeFi coins, Compound (COMP) and Balancer (BAL).

On Jun. 10, Coinbase revealed that it is looking into supporting 18 cryptocurrencies. Although the company does this every few months, this time, a sizable percentage of the tokens the exchange identified are DeFi centric. LEND, Bancor (BNT), COMP, Keep Network (KEEP), Ren (REN), and Synthetix (SNX), which were mentioned by Coinbase on Jun. 10, are either largely focused or entirely focused on enabling decentralized finance.

While the exchange is still evaluating whether or not the tokens should be added, the seven aforementioned coins have experienced rallies since the announcement. On the day of the announcement alone, some of the coins gained 10%.

These tokens are benefiting from what is colloquially known as the “Coinbase Effect,” whereas coins mentioned by the exchange temporarily boom as listings on Coinbase often lead to increased adoption.

These launch events generated hundreds of millions of dollars worth of value as speculators were quick to throw money at these tokens and their respective protocols.

A running theme through these two trends is that the growth of DeFi may not be sustainable.

Tokens listed or mentioned on Coinbase often retrace once hype dies down. Also, many expect the Compound and Balancer bubbles to eventually deflate.

Yet when that correction takes place and how far this segment falls remains to be seen.

What’s Next For DeFi?

Stepping back, decentralized finance is facing down longer-term roadblocks that may worsen the upcoming correction should it ever arrive.

Multicoin Capital’s Kyle Samani recently argued that DeFi is facing down “invisible asymptotes” that are a byproduct of how Ethereum currently works. He opined:

“You just can’t build global scale trading systems for lots of users on POW chains. It just doesn’t work. High latency –> all kinds of negative second order effects. So I think for now we are near a plateau for DeFi – measured in ETH terms (not USD) – until the core latency problems are solved.”

This comment was made in reference to Ethereum’s ~13 second block times, which disallows blockchain developers from building decentralized applications that mimic Wall Street financial instruments and products.

Samani added that crypto also has issues with a lack of fiat on-ramps and high transaction fees, which slow adoption.