Home Technology How Do You Delve Into The Secrets Of Evolution? With Butterflies!
Technology

How Do You Delve Into The Secrets Of Evolution? With Butterflies!

Over 170 years ago, English naturalists Henry Walter Bates and Alfred Russel Wallace embarked on an expedition to South America – Bates would extensively document the Heliconiinae butterflies and their mimic behavior; and Wallace would start to formulate his own theory of evolution.

Fast forward to today: Colombian researchers have been working as part of an international team using modern molecular genetics to delve into the evolutionary pathways of how different butterflies arrived at the mimic behavior.

Carolina Pardo-Diaz, Director of the Department of Biology at the Universidad del Rosario in Bogota, Colombia says the Heliconiinae make a great “natural laboratory” for studying evolution.

These butterflies are emblematic because of their pattern – In many species, this pattern tells predators that they are toxic to eat, even though they are not.

Previous studies had seen a role for a wing-pattern-controlling gene called WntA in the evolution of mimicry across different Heliconiinae species from Central and South America.

In a study published in the journal Current Biology this week, researchers used CRISPR/Cas9, a modern gene editing technology, to selectively damage or “knock-out” the WntA gene in examples of those 12 species. In all those species, the loss of the WntA gene meant a big change in their wing displays, but the effect was not exactly the same.

“We wanted to know if the different species used the same genetic pathways to arrive at their mimic patterns,” Pardo-Diaz said.

“The results were surprising to us,” said Camilo Salazar, who is also a biologist at the Universidad del Rosario.

He said that the team had previously thought because all the mimic species expressed similar patterns, they had arrived there by similar pathways.

But according to Salazar, the result shows although the same master gene, WntA, is the one that mainly controls the color phenotype, the developmental pathways that lead to the final color pattern between mimic species are not identical because the mutants are different, even if the mutated gene is the same.

Despite being a large, international study, there was a key role for Colombia.

“Colombian researchers collected, raised and supplied individual butterflies from Colombia such as H. e. chestertonii,” Salazar said, “In addition, we made Knock-outs of some of the Colombian species of H. melpomene and H. timareta but unfortunately the latter wasn’t able to be included in the final paper.”

Salazar said the implementation of CRISPR in these butterflies is relatively recent.

“The technique began to be tried in 2015 and produced the first results published in 2018, he said, “CRISPR is the first mutagenesis technique that gave us results in Heliconius – even so, it is necessary to inject many eggs since only 10% to 20% of the injected eggs show some kind of alteration in the phenotype.”

According to Salazar, the next step is to make selective knock-outs of the part of the butterfly genome that regulates how genes are expressed, to understand how these regions contribute to the formation of the great diversity of butterfly coloring patterns in nature. 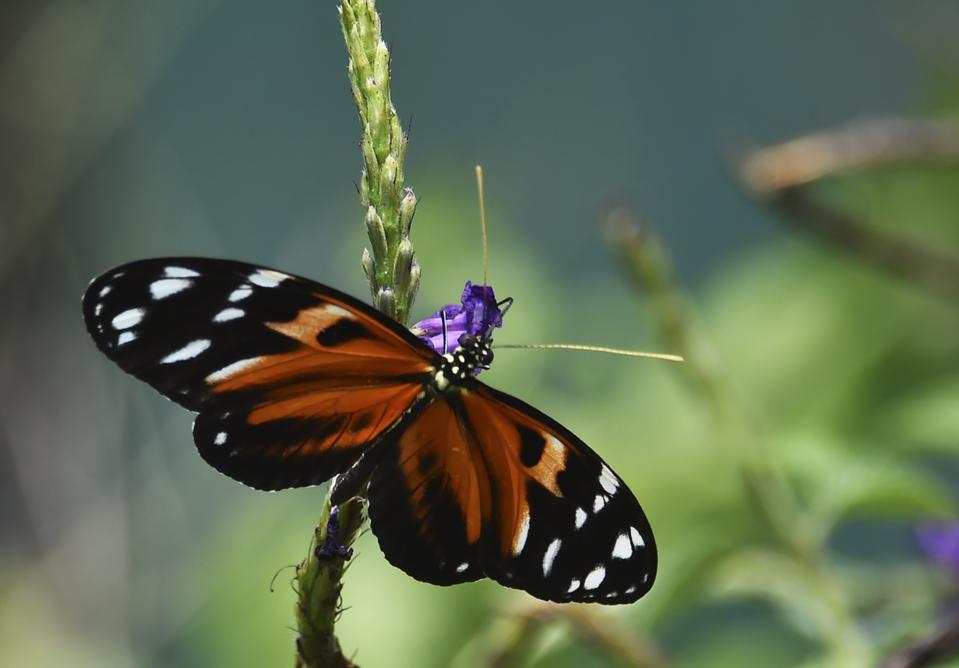 A Heliconius hecale butterfly is seen during the inauguration of the Metropolitan Butterfly Farm in … [+] Panama City on February 20, 2017. / AFP / RODRIGO ARANGUA (Photo credit should read RODRIGO ARANGUA/AFP via Getty Images)

Colombia, the second most biodiverse country on earth is home to more than 3000 species of butterflies.

Even though the survey took place in the dry season, in the area of Piedmonte, researchers found 56 species in 46 genera and in the Ditaires wetland they found 44 species in 36 genera.

According to the researchers, this is important because butterflies are both indicators of the health of an ecosystem and a vital link in the pollination chain.

How Robots And Drones Are Helping To Fight...

Moms Are Not Okay: Pandemic Triples Anxiety And...