Breaking
Boston Globe Starting “Fresh Start” Initiative As Part...
Can Money Protect You From Covid-19? It May...
The Most Important Voice In Artificial Intelligence: Frontline...
Amazon’s Small Business Empowerment Team Is Helping Entrepreneurs...
10 Ways For Entrepreneurs To Power Through Tough...
Will The Cloud Take Down The Mainframe?
How Itamar Medical Stock Could Triple
How To Cash In On Biden’s Stimulus With...
The Refactoring X-Factor Behind Software Modernization
3 Habits Of Millionaires
Will The Stock Market Sell Off As Biden...
Microsoft Reverses Xbox Live Gold Price Increase Following...
Weekend Favs January 23
FDA Approves First Monthly Injections To Treat HIV
Low Volatility Investing Works In China Too
How 2020 Introduced Big Technology Startup Opportunities
Home Technology How Dungeons And Dragons Is Helping Kids Open Up
Technology

How Dungeons And Dragons Is Helping Kids Open Up 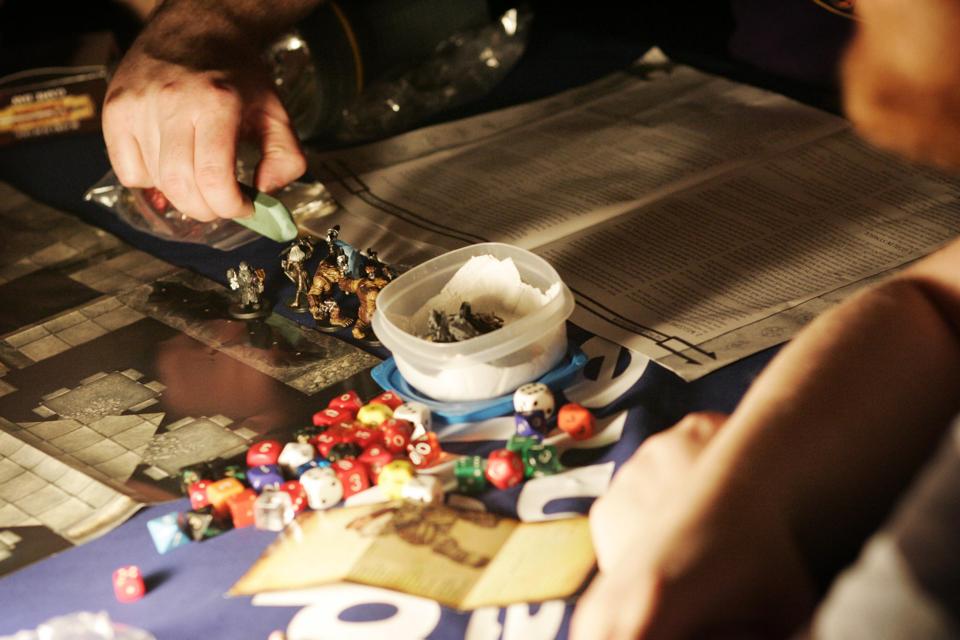 Gamers get ready before the start of the Worldwide Dungeons and Dragons Game Day event at the London … [+] Dungeon in south London. (Photo by David Parry – PA Images/PA Images via Getty Images)

“… yes?” I respond and she tosses me a handful of red and black dice that I must admit is very pretty and I immediately feel very connected to.

It is official. The die has been cast. I play Dungeons and Dragons.

However, I am not alone. Dungeons and Dragons (DND) is making a comeback. Or rather, the role playing game (RPG), as well as a number of other table top RPGs, including games like War Hammer, that had previously been relegated to the edges of geek gaming culture are now starting to find a footing in the main stream. The fact that someone like me is starting to play DND is emblematic of this trend. My knowledge of most fantasy worlds both main stream (e.g. Lord of the Rings, The Witcher, etc.) or otherwise, is superficial at best, but I have to admit that DND is… really fun. Thanks to shows like “Stranger Things” more and more people like me are being introduced table top gaming and finding that it’s benefits can go beyond just having a good time with friends.

These days the stigma around DND as a game for social outcasts and loner men is beyond outdated. In 2017, DND had their best sales year since it was acquired by the Wizards of the Coast game publisher in 1997 with 8.6 million Americans having tried their hand at exploring dungeons and slaying dragons that same year (with 40% of players being women). Today, therapists are taking note of the game’s growing popularity and how RPGs can help children with behavioural issues improve their social skills.

So how exactly are games like DND helping children (and adults) confront and slay their inner demons?

For many therapists, the benefits of DND are obvious because it is by definition role playing, character development, and conflict resolution, which are all major tenants of cognitive behaviour therapy, “a short-term, goal-oriented psychotherapy treatment that takes a hands-on, practical approach to problem-solving.” The goals of cognitive behaviour therapies are to change unhealthy or unhelpful patterns of thinking or behaviour and replace them with healthier and more productive alternatives. Cognitive behaviour therapy has been shown to effectively treat and help people manage a variety of mental illnesses including; depression, various types of anxiety, phobias, post-traumatic stress disorder, sleep disorders, eating disorders, obsessive compulsive disorders, substance abuse disorders, bipolar disorders, and schizophrenia, among others.

But broaching mental health subject with kids can be difficult, especially when you are dealing with issues like acute social anxiety and autism. This is where DND comes in. With the option of creating a fantastical world, hard to talk about issues can be addressed in a safe environment where kids can pretend to be someone else, get lost in the fantasy, and explore formerly unacknowledged aspects of their personality, as well as built empathy and interpersonal skills. In these therapeutic settings everything from the interpersonal dynamics, to the degree of conflict, to even the pacing of the story can be carefully controlled to usher players into more complex and dynamic social scenarios that would otherwise prove overwhelming for kids suffering from behavioural challenges.

“It’s kind of like eating your vegetables without knowing your doing it,” explains a Game to Grow parent, an RPG therapy organisation (formerly Wheelhouse Workshops) located in Kirkland, Washington, “It’s more about building success and building friendships and having fun and then also learning [social skills] in such a way that you can go apply that in other contexts.”

The Bodhana Group, another RPG based therapy organisation out of Pennsylvania explains that the foundation of creating a therapeutic system of gaming is to first set up a game that is fun and creates a relaxed environment where a person can let their guard down. According to the group, there are three pieces that must be put together for the cognitive behaviour therapy to be effective;

“I have definitely found that DND can be a good tool to bring people out of their shells and get players to be creative in a way that they do not normally get to do in their daily lives.” Explains my Dungeon Master (DM), Will Hurst (co-creator of another role playing game system, Dreadlore). Within my own DND group, Hurst not only created an entire world for us to explore, he also talked through our characters and their backstories with us one-on-one and made a plan for how they would move through the world he created before the game even started.

However, his work didn’t stop there, “DM’s need to be arbiters between players.” Hurst explains, “So when players are playing with or against each other you need to make sure that the interactions are healthy and productive. You make sure that no one is getting bullied and that players are growing through the game.”

“With DND you have to be social. You have to make decisions.” Hurst continues, “Yet, you have impunity because it is not you making the decision, it’s your character so it give players a lot of leeway to explore aspects of themselves that they would not have otherwise. But the game is also based on chance, which teaches players how to deal with the simple probability of life. There is no arguing with a die roll and that is important for players to understand as well.”

The benefits of these therapeutic gaming groups are often swift and have the added benefit of building upon themselves over time.

“We’ve noticed a gradual and definitive change in the way our son approaches interacting with others.” Says another Game to Grow parent, “He has become more aware of how his actions affect others, like how focusing on only winning is not always the best strategy. He seems more skilled in navigating social situations, like the importance of listening to others and the art of compromise.”

Similarly, another Game to Grow parent reflects, “My normally quiet and introverted son leaves this workshop smiling and excited to share out the adventures he just embarked upon.” Continuing, “He [also] sees how to better listen, interact, and help others.”

For Love of the Game

It would seem that the therapeutic benefits of these games is felt on both sides of the table, from DM to players. “I have definitely used DND as a tool to work through my own friendships on a personal level.” says Hurst.

Something incredibly interesting about RPG based therapy groups is that they were born out of love of the game on the part of therapists.

Megan A. Connell, PSY.D. ABPP, a psychologist, and Level 13 Bard, hosts a YouTube series called, G33ks (Geeks) Like Us that explore the ins and outs of RPG based cognitive behaviour therapy. She also runs games such as “self-rescuing princess,” a girl’s empowerment group, as well as social skills and low sensory groups, and even a group for veterans (Connell is a veteran herself). Additionally, Connell trains aspiring DMs on how to get a group together, run combat, world build, and create non-playable characters (which are characters that players can interact with in the game for a longer period of time that just one session and are played by the DM). Connell believes that the more DND players there are in the world, the happier it will be.

A player for Connell’s girls empowerment groups explains how her character taught her to enforce her own boundaries saying, “I realised in [the real world] my character would not have said yes to [a situation I was not comfortable with], so I decided to do what she would do, and I said, ‘no.’” While another of her players in the social skills group had the realisation, “Ohhh! So this isn’t about doing what I want, it’s about doing what my character wants.”

DND is by no means only slaying dragons or exploring dungeons. In both therapeutic settings, as well as none therapeutic settings, DND can get into some heavy territory. “As a DM I have used my games as an opportunity to get my players to explore and confront a variety of themes, such as betrayal or racism, as well as talk about religion and death, and I think that is something very rewarding for many DMs.” Says Hurst.

The potential applications for the therapeutic uses of DND are endless and are actively being explored by researchers. The is currently an RPG research data base that collects and explores just how far its uses could go. It will be fascinating to see how the field will expand and who it could help. For example, how could RPG therapies be used to help address substance abuse disorder among a community of people whose success is dependent, in part, on rebuilding their entire social structure and habits? How are these games helping veterans readjust to civilian life? Can these games help people navigate things like grief and loss?

Ultimately, as our world becomes more and more demanding it is nice to know that some of the solutions to our woes are found in fun, play, and embracing the geek within.