How Fires In Australia Could Alter Weather Elsewhere Too

The wildfire images and news coming from Australia are stunning. The sheer extent of the active fires and smoke plumes makes previous fires in California, Russia, and the Amazon seem small. Steve Nesbitt, a colleague and outstanding atmospheric sciences professor at the University of Illinois, articulated something on Twitter recently that I also wondered about recently. He tweeted, “Starting to wonder how all of this sensible, radiative, and diabatic heating (from the fires) might be modifying the large scale circulation…and the global models will have no clue except for data assimilation.” He is speaking our language as meteorologists so let me translate: Is the heat and smoke changing larger scale weather patterns and how will the global forecast models respond? I won’t offer a definitive answer here, but there is certainly scientific evidence that fires this massive will affect weather-climate processes far from Australia. 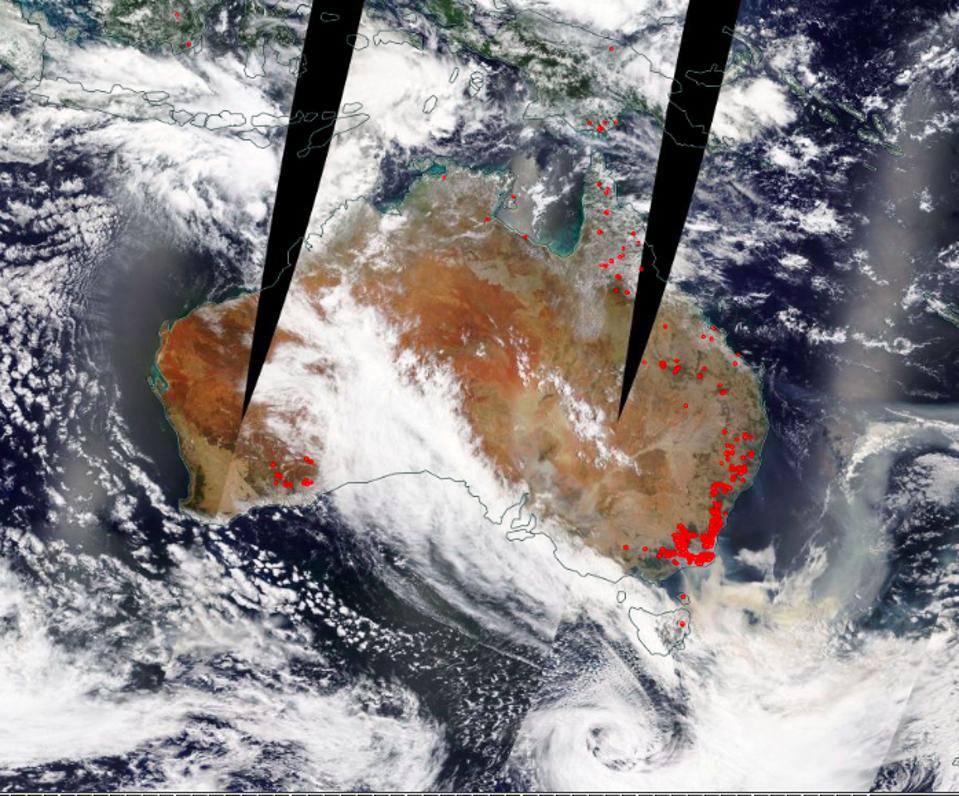 Australian Fires continue to burn as of January 5th, 2020

Many people are learning about the local effects of the fires on the generation of Pyrocumulonimbus clouds (image below) because it has been well-documented in the popular media. Fire, smoke particles, and instability in the atmosphere generate massive thunderstorms. However, Nesbitt’s point is about the larger scale impacts on the atmosphere. I will use an analogy, though not a perfect one, to set the stage for the discussion. El Nino is associated with anomalously warm waters in the equatorial Pacific Ocean. This surface “heat source” and associated changes in atmospheric circulations cause changes in weather patterns around the world. You can think of the “heat source” as a rock thrown into a pond that generates waves that ripple far beyond the point of impact.

According to various reports, 12 to 15 million acres of land have burned in the Australian bushfires, and that number is likely to grow. According to Time magazine, the acreage is roughly the size of Vermont and New Hampshire combined. Could this heat source alter atmospheric circulations? Let’s start with the smoke. 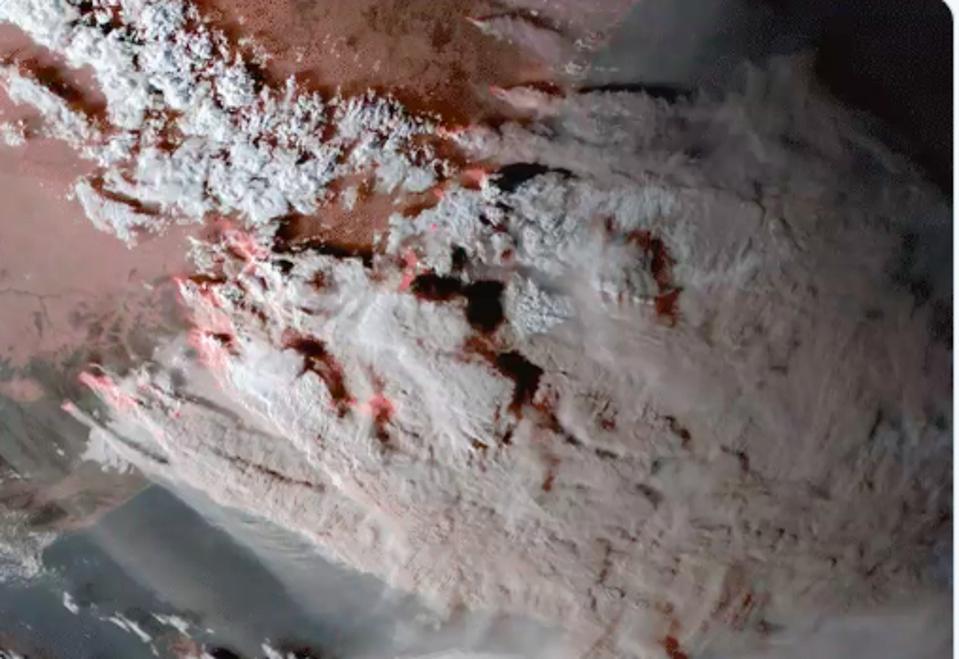 Neil Lareau, a professor at the University of Nevada, shared a link to a 1991 study in the Journal of Geophysical Research-Atmospheres showing that biomass fires can significantly reduce daytime surface temperatures by 1.5° to 7°C under the smoke. More recently, a 2014 study found that wildfires in Russia reduced the amount of incoming solar radiation at the ground over much of Eastern Europe because of the smoke plume. This also resulted in cooler temperatures. A 2019 study in Canada found similar results as well as a reduction in exchanges in heat and moisture between the surface and the atmosphere (fluxes). These studies also remind us of an important and basic meteorological fact. The smoke and haze causes cooling at the surface, yet dark aerosols in the column of air may actually absorb solar energy, which warms that part of the atmosphere. From basic meteorology “101,” a cool surface layer and a warmer upper layer stabilizes the atmosphere. For more on atmospheric stability, this link from the University of Arizona is a good resource.

Since warmer air is less dense than cold air, it will become buoyant and rise. If warm air lies above cold air, you can see that rising motion will be inhibited (any rising parcel will be colder than the warm overlying air). This situation is referred to as an inversion. Any atmospheric change that reinforces this pattern will increase the satbility of the atmosphere. Surface cooling, upper level heating, or a combination of the two will reinforce the stable “warm over cold” pattern.

This gets back to Nesbitt’s original Tweet. With the size of these fires, do they create heating/cooling or stability anomalies that perturb the atmospheric column or wave pattern regionally and perhaps beyond? Further, how far downstream would that “ripple” go? Does it change the broader circulation to alter weather where you live like an El Nino connection? I am sure researchers will address these questions in the coming years. 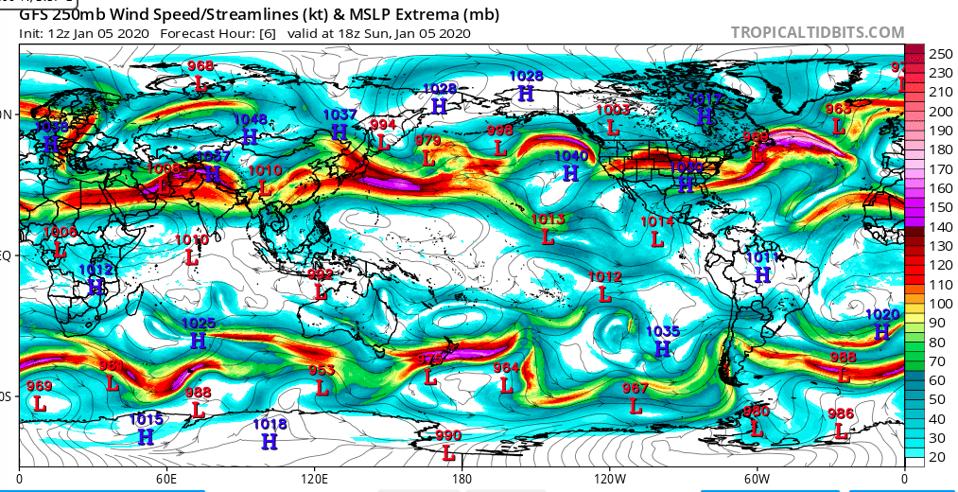 Another potential and far-reaching impact is related to the Pyrocumulonimbus clouds that I mentioned earlier. A 2019 study published in the journal Geophysical Research Letters found that the smoke plumes from towering smoke-laden clouds can penetrate into the stratosphere. Using the 2017 fires in the Pacific Northwest, they found from modeling studies that the smoke aerosols can linger in the stratosphere up to 5 months and actually create net warming at the top of atmosphere. Smoke contains soot, an effective of absorber of solar radiation. This is counter to the temporary cooling effect that large volcanic eruptions can have on the climate system. Volcanic aerosols injected into the stratosphere tend to be more sulfate-based, which are more effective scatterers of solar energy. 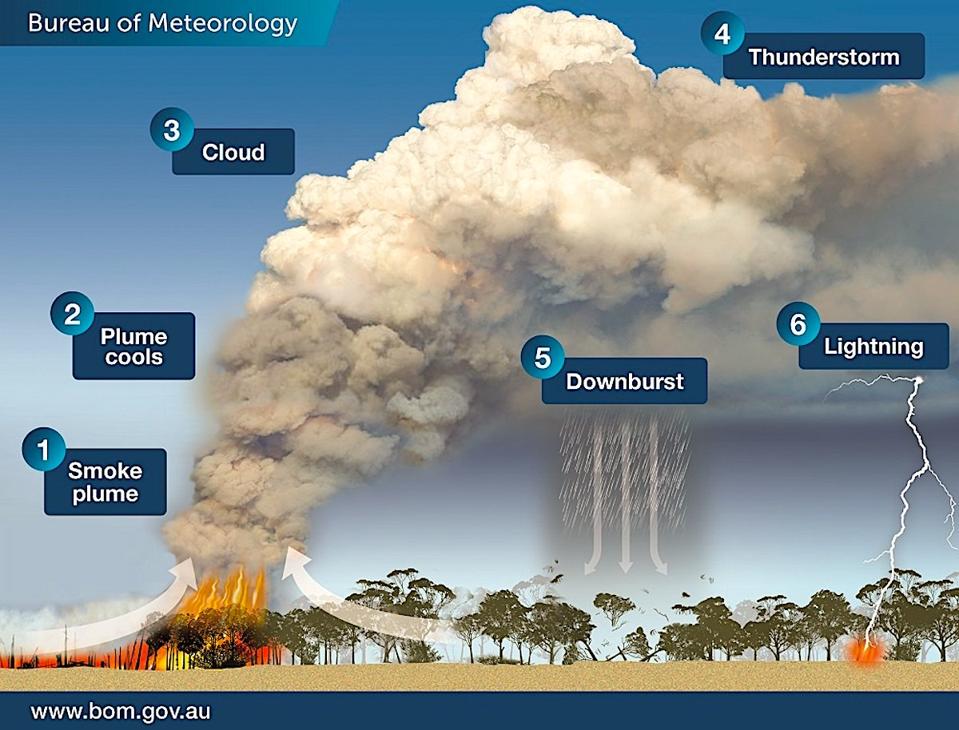 Radiative forcing is a very important aspect of our weather-climate system. I also find it to be one of the most confusing concepts for some people. Many people understand that the Sun is critical in our weather-climate engine, yet in terms of Earth’s climate forcing, it has a “seat at the table” with Greenhouse Gases, aerosols, clouds, and land use change (graphic below).

Earth is continually bathed in energy from the sun. A portion of the energy that arrives at Earth is reflected back into space, another portion is absorbed directly by the atmosphere, and the remainder moves through the atmosphere to the surface. Sunlight energy heats land and water at the surface, and in turn, they emit heat. This heat provides further warming of the atmosphere. The mix of gases in our atmosphere keeps some of the heat energy from escaping directly to space, similar to the way a blanket keeps warmth near your body. This process is the naturally occurring greenhouse effect, and it keeps Earth warm enough to support life.

Basic physics tells us that the Earth must emit an amount of energy back to space equal to what it absorbs from the Sun. In the past several decades, the anthropogenic climate drivers (Greenhouse Gases and land-use change) have dominated natural climate drivers in warming the surface. However, even on shorter time scales, radiative forcing can have an impact on our weather so it is not surprising that a volcanic eruption or perhaps large Australian wildfires could alter global weather. 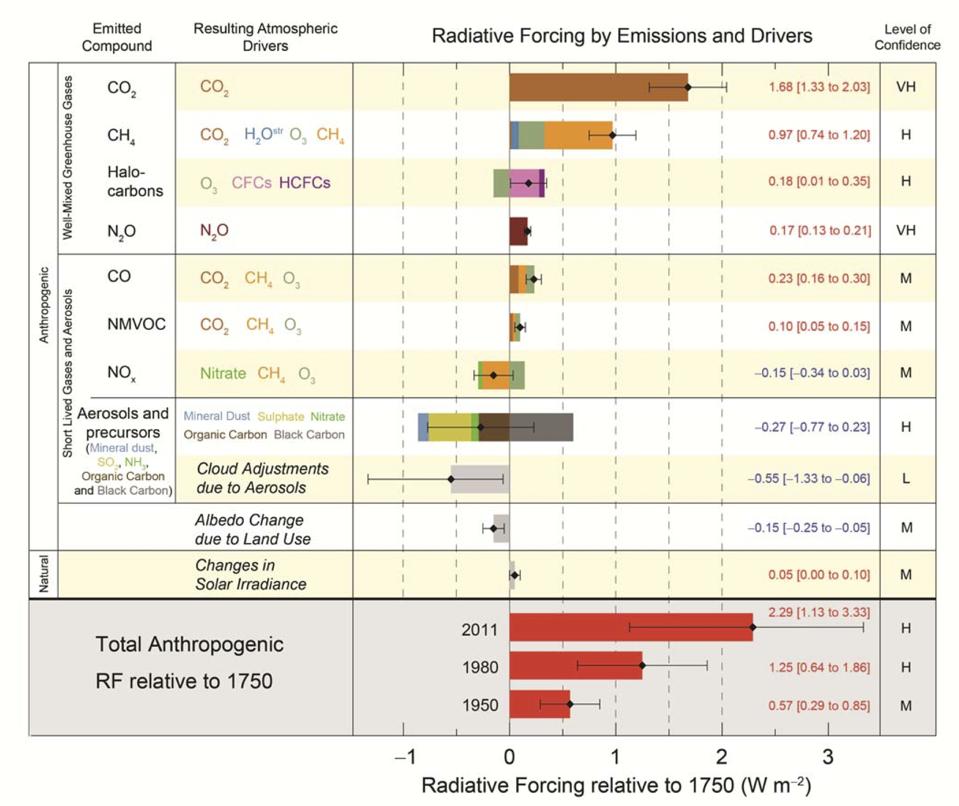 Radiative forcing on the climate system

SAP BrandVoice: Learn How This NGO Bridges The...

One Human Uses The Same Amount Of Water...