How Great Leaders Persevere When Things Are In A Shambles

Sometimes we step into new chapters of leadership with the wind at our back, ready to “take things to the next level.” But commonly, new leadership chapters put us squarely in the face of gale-force headwinds, testing every limit of our abilities, patience, and tenacity.  An executive I work with recently stepped into the biggest challenge of her career. Recruited from outside the organization, the business was losing money, costs bloated, customer loyalty fading, and key talent defecting. Her predecessor made a failed attempt at reorganizing before leaving for the competition. Morale was low while distrust and anxiety were rising.

In a ten-year longitudinal study on executive transitions that my organization conducted, the landmines we uncovered that lead to more than 50% of executives failing within their first 18 months were plentiful. And with the best of intentions, my client was about to step on a number of them.  When a leader inherits a mess created by others, especially when arriving as an “outsider,” the situation can feel fragile and knowing where to begin the long journey of change can feel precarious. Based on our research and my experience, there are seven common pitfalls the most effective leaders do to avoid failing in the face of major challenges.

Have personal support systems in place. Unquestionably, situations of substantial challenge will drain your emotional resources. Frayed nerves, hair-trigger buttons that get too-easily pushed, loss of self-confidence and impatience with others to name a few likely pain points. For many leaders, self-care is the first thing to go.  Good nutrition, sufficient sleep, and routine exercise are table stakes for leaders facing harsh headwinds. Having a safe place to vent, regain perspective, and monitor emotional triggers is also key. A great executive coach, therapist, or peer executive support group can be your greatest ally when intense, confusing emotions begin to stockpile.

Resist the temptation to emotionally distance yourself. Difficult and unfamiliar circumstances can make leaders feel vulnerable. To combat their anxiety, they actively avoid being implicated in the shambles in subtle, but damaging ways. Four weeks after my client’s arrival, I noticed a distinctive pattern in her language. When referring to the significant challenges of her new organization, she consistently spoke in third-person references – they, them, those people, etc. And when speaking about possible changes that needed to be made, she spoke only in first-person language, like, “I will,” and “If I don’t.”  Her growing contempt for the organization was visible. Instead of building confidence in their future, she was unwittingly fueling anxiety, distrust, and low morale. Deeper reflection revealed she was trying to emotionally distance herself from the shambles driven by an underlying fear that she might fail to turn it around. To win the trust of those who must live with the changes you create, you have to engage them as part of them, not apart from them. The quicker you can lose your “outsider” status, using inclusive language like “we” and “us,” the sooner they will be open to changes you need to make.

Never blame your predecessor.  It’s a natural temptation to blame the past regime when entering organizations in disarray. In one meeting, my client’s frustration got the best of her, and while looking over the past quarter’s budget, she blurted out, “What on earth was he thinking?” Well, since “he” isn’t there anymore, everyone else in the room was implicated by proxy. Nobody knows better than they do about the mess they are in, much less how it came to be. You are better off simply making no references to decisions or actions taken prior to your arrival. Your best response when being baited to blame those that came before you is simply, “We can’t change what happened then, but we can change what we do going forward.” People appreciate when you take the high road. 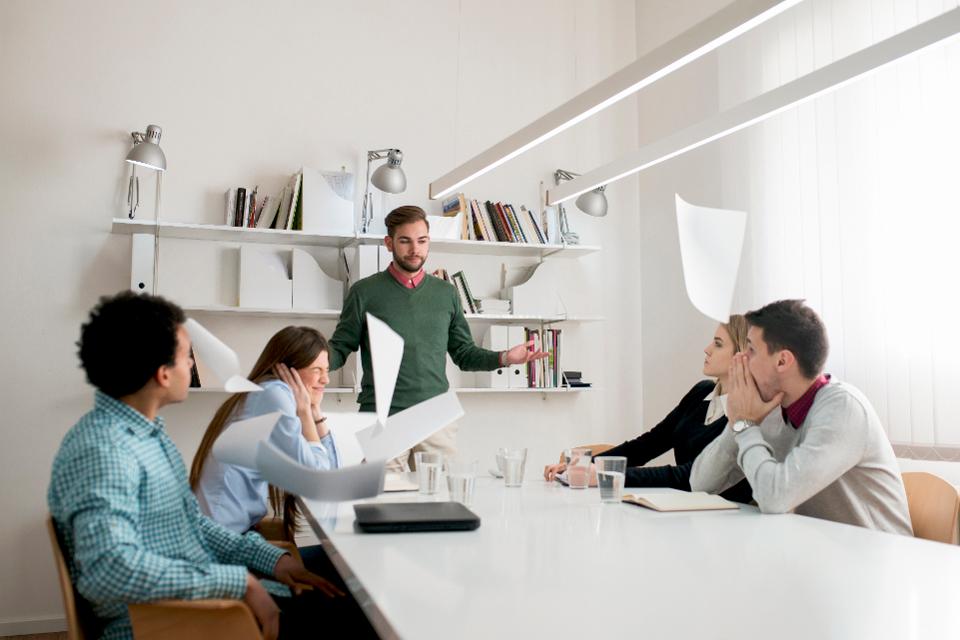 in the midst of a major challenge, this leader must figure out how to get his team on track without … [+] losing it.

Minimize references to past successes.  Absent any substantial experience in your new environment, the likely place to reference your “track record” is past successes.  Chances are you were hired into the role because you had relevant experiences. But talking about those experiences doesn’t help you leverage the wisdom from them. My client happened to arrive from a very successful assignment at a global Fortune 100 company where her impact made headlines. But each time she referenced her work there, often beginning sentences with, “Well, when I was at XYZ company…” people simply shut down. I told her that those attempts to bolster her credibility were actually backfiring and that she needed to let the merits of her thinking stand on their own, without referencing where the ideas came from. Once she started doing that, people listened curiously instead of dismissing her.

Know the fine line between others’ self-promotion and real help. Fearing for their very survival, people in a damaged organization will campaign at great lengths to prove their worth. My client had people beating paths to her door with ideas that had languished unheard. They were eager to offer their support, and even more eager to be seen as key players in the future she was constructing.  In one debrief, she vented to me, “On one hand, some of the elements of their ideas are really good. On the other hand, they are so invested in convincing me how indispensable they are, they’ve lost objectivity about what is and isn’t feasible.” She felt obligated to hear their ideas, yet reluctant to offer critique for fear of appearing unopen to any ideas but her own. She knew she couldn’t symbolically accept ideas just to look like she’d listened, nor could she be the only one whose substantive ideas prevailed. She created a process of full transparency that allowed ideas to be judged on the merits of their potential impact, not on who brought them. Together, they created a set of criteria that future solutions needed to meet, and all ideas were presented to the entire team, not just her. Further, she made it safe for each presenter to disclose any personal agenda about why they wanted their ideas adopted, and what fears they had about their ideas not prevailing. She asked them to “honestly assess your idea as if you had no fears about job security.” Not only did this accelerate trust among them, it allowed the best ideas to prevail.

Test the reliability of your data. While unvarnished data can be hard to come by when facing harsh headwinds, it’s even harder to come by when everyone wants to appear innocent and important. My client found that every report she asked for, whether sales trends, customer satisfaction analyses, current budget run-rates, or employee retention risk, all had some other data source that refuted it. Dueling fact bases aren’t uncommon in organizations, but they intensify when people fear being held accountable for the truth. When she would question the data presented to her, people got defensive. One asked, “Are you calling me a liar?” Others would blame their antiquated technology’s inability to generate reliable reports. Rather than be forced into being the only arbiter of the facts, she pulled her team together, pointed out examples of where she felt there were discrepancies in the story, and said, “Any hope of changing our trajectory to something we all want will be predicated on a truthful assessment of where we are, however painful that might be. Bad news won’t get better with age. So I’m asking you to work together and come back to me with an honest look at where we are.” She also hired several external analysts to do an independent audit. The consistent data from each analysis allowed for more confident priority setting.

Be transparent about how you will make changes. There are lots of rules about how fast and how big an entering leader should make changes. Some suggest waiting 90 days, even up to a year, to learn the organization before upending anything. Some say clean house on day one. The speed of change will depend on your particular situation, and what the business can tolerate. If immediate change is needed, make it. If you aren’t sure, then investigate and diagnose before you make your moves. My client’s thoughtful approach served her well in this regard. She was very transparent upfront about how she would assess the organization and in what time frame, and how she would approach making changes.  Her “leading out loud” allowed others not to wait in dread, and also not to remain in denial.  My client’s approach was to start with small wins championed by people in her organization. This built momentum that enabled the organization to absorb more disruptive change later when she introduced it.

Inheriting a leadership shambles, especially one you don’t uncover until after you arrive, can be excruciating. Don’t compound the challenges with your own unfortunate choices that make things worse. Navigate through the mess carefully, building coalition and being fully transparent along the way. Eventually the shambles will begin to clear. Be sure it isn’t replaced by a shambles of your own making.

Imposter Syndrome In Your Business And How To...

How Facial Recognition Will Change Retail

This Entrepreneurial Couple Kicked Burnout To The Curb

What Everyone Gets Wrong About Strategy

Is Your Company Ready For CCPA Compliance?