Breaking
Meet Onesimus, The Enslaved Man Who Saved Boston...
How to Build a Sales Forecast Model
The Unexpected Ways COVID-19 Has Forever Changed What...
Google Posts: Conversion Factor — Not Ranking Factor
How To Bring Your Branding To Life
Coinbase Cofounders And Investors Poised To Rake In...
How To Stay Top-of-Mind For Your Audience With...
Employers: Eight Red Flags You May Not Notice...
The benefits of videoing in the automotive industry
Ted Lasso, Other Apple TV+ Shows Arriving Soon...
How To Incorporate Click And Collect Into Your...
What Are Working Capital Loans and When Should...
The 10 Biggest Trends in Entrepreneurship to Look...
Clubhouse Has Grown 10X In Two Months. Here’s...
Here’s Why Tyson Foods Stock Looks Undervalued At...
How To Maintain Client Relationships During Long Projects
Home Technology How I Got 15,000 Fractaline For Destiny 2’s Obelisks And Empyrean Foundation
Technology

How I Got 15,000 Fractaline For Destiny 2’s Obelisks And Empyrean Foundation 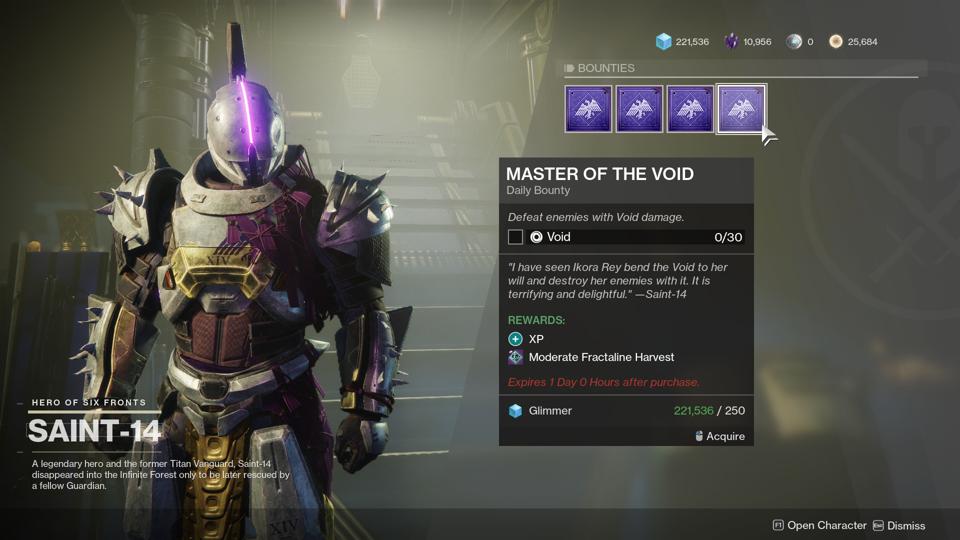 If Destiny 2’s Season of Dawn has a main grind other than XP for the battle pass, it’s Polarized Fractaline, a new currency (surprise!) that is key to one of the main objectives of this season, ranking up a series of obelisks all around the solar system.

If you want to farm the best god rolls of the best weapons in the season, you need to invest some serious currency in the four obelisks, with some bonus XP for your battle pass for other perks.

I have maxed all four obelisks at rank 11, which I did about a week ago, and then I have gone above and beyond, amassing several thousand more Fractaline on top of that. Why? Because datamined challenges suggest we may need to donate as much as 5,000 Fractaline to the main Tower obelisk in order to help fund the Empyrean Foundation, a mysterious new “community project” that will arrive in February. Early hints imply that it has do with Saint-14’s new purpose in life, building a “beacon” in the system. In practice, I firmly believe that Empyrean Foundation has to do with the return of Trials next season.

So yes, I am drowning in Fractaline, and the common question I hear when I brag about that is…how?

A few things to know about maximizing your time spent farming Fractaline.

First, I did most of this before Saint-14 ever arrived in the Tower, but now that he’s here, it should be extremely easy to amass all the Fractaline you’ll ever need. You need to finish the Saint-14 quest where by the end, you give him a “bounty book” where he will then give out four bounties a day, each of which give you 50 Fractaline for a total of 200 per character. This is a far, far more efficient way to farm Fractaline than the much more involved weekly bounties, and if you have three characters, these bounties alone can give you 4200 Fractaline a week. You only need 8800 to max out all four Obelisks at rank 11. And these bounties are easy, like 30 void kills or 15 solar melee kills or one Cabal champion kill. 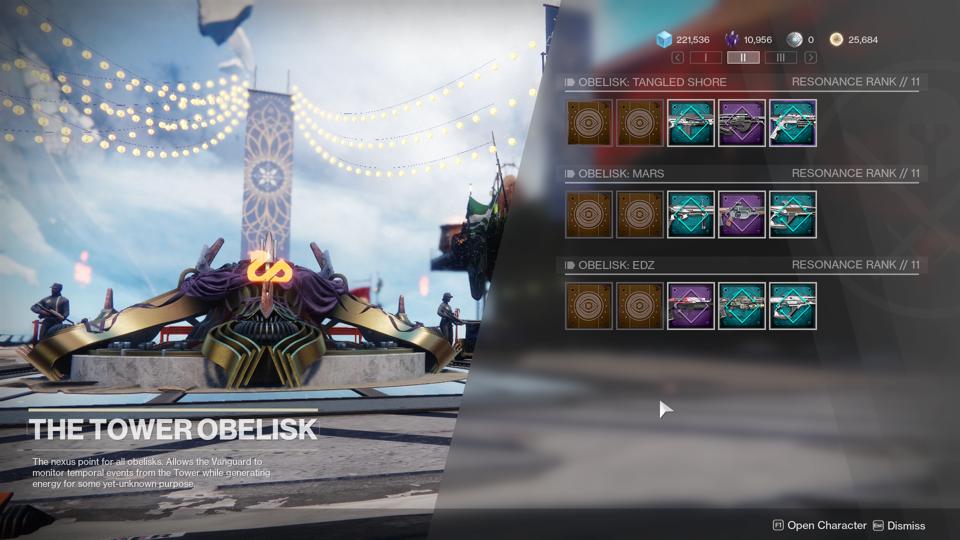 Then, you move on to the weeklies. Some of the more tedious ones I tend not to bother with. I am not a fan of farming say, 20 Fallen Captains or 30 destination materials as those are just too laborious to me. Instead, I stick with more generalized ones like killing X amount of Cabal or Vex, or getting X amount of elemental ability kills or scout rifle multikills.

All of these are things that can be A) accomplished through a somewhat normal amount of Sundial farming, especially Cabal kills or ability kills. Or B) otherwise you want to head to your favorite Lost Sector and get them done that way, as you won’t be splitting last hits with teammates. 300 Scorn kills, for instance, is five speed runs through the Bay of Drowned Wishes in Dreaming City. Pick the least annoying weeklies and get them done on all characters. Remember, none of these challenges are remotely level dependent, and these days you do not have to unlock quests on multiple characters. So you can have painfully underleveled alts and still get these bounties done across multiple characters.

The worst way to farm Fractaline is to run playlist activities. Yes, through sheer time alone I have probably gotten a few thousand Fractaline from random drops, but this is a badly inefficient system. I did things like grind for an entire Iron Banner set or the whole Python Gambit grind to see Fractaline drop maybe, two or three times at most? And I am convinced the “bonus” Fractaline drops you can upgrade in the Obelisks do nothing. Supposedly, this new item you can buy at the Tower obelisk that increases Fractaline drops from playlists six times a week can help, but again, it is way less efficient than just doing the bounties whenever you have them. 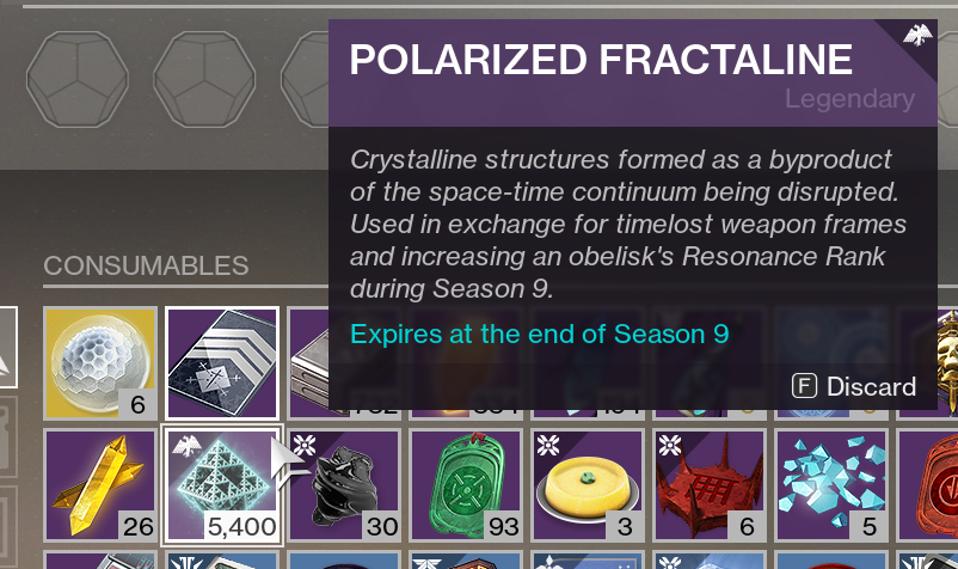 Another key is resisting the temptation to constantly buy frames for Fractaline. 10 frames is 100 Fractaline, and I would definitely not buy any of the Sundial drop ones, as it’s just too easy to farm those as is, and you’re just wasting Fractaline. The most valuable weapons to farm with the frames are the battle pass weapons, Trophy Hunter and Pyroclastic Flow, and then Perfect Paradox and maybe Jack Queen King. But I would wait until at least you have the obelisks maxed before you seriously start investing in those.

In the end you need 8800 Fractaline for four, level 11 Obelisks, but if you want max Sundial drops, do the EDZ and Mars ones first and get to level 32 in the battle pass. Then if you care about Empyrean Foundation, you may need 5,000 more, but I can’t guarantee this will do anything other than complete a Triumph, and I am not even sure that it’s a Triumph required for the Savior title or not. So you may not want to waste your time until we know.

This grind is not nearly as hard as it initially appears, but I do think a lot of people have no clue how best to get Fractaline. Hope this guide helped. Okay, I’m off to go take a bath in my vault of pointy black diamonds.

15 Key Considerations Before Getting Started In Real Estate

7 Side Hustles For Teachers Who Want To Make Extra Money