Breaking
‘Remnant: From The Ashes’ Is Cheaper Than Ever...
Top Stocks To Buy Today As Markets Rise...
How To Sell Artisanal Ice Cream In The...
Making America’s Trumps Pay Their Fair Share
Fortnite Season 4, Week 9 Challenges Revealed And...
Yesterday You Were Just A Business; Today You...
Should Your Company Help Get Out The Vote?...
Hyperautomation And What It Means For Your Business
The Role Of The Indie Agency In Our...
Parker-Hannifin Crosses Pre-Covid Peak But Investors Set To...
6 Reasons Your Cold Messaging Efforts Fail And...
4 Analytics Categories To Track To Improve Your...
Predictions 2021: Cloud Computing Powers Pandemic Recovery
This Is Why You Need A Strategy In...
Economic Research Exposes Significant Flaws In DOL H-1B...
How Breast Cancer Turned This Entrepreneur Into A...
Home Business How Joe Judge Plans To Build A Competitive Giants Team
Business

How Joe Judge Plans To Build A Competitive Giants Team 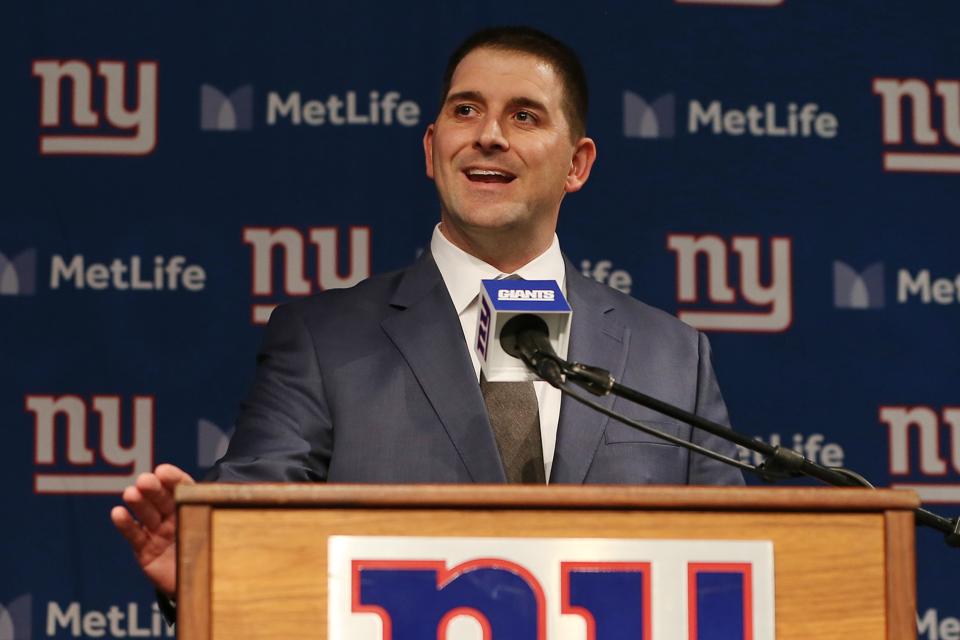 EAST RUTHERFORD, NJ – JANUARY 09: Joe Judge talks to the media after he was introduced as the new … [+] head coach of the New York Giants during a news conference at MetLife Stadium on January 9, 2020 in East Rutherford, New Jersey. (Photo by Rich Schultz/Getty Images)

Despite his lack of experience as a head coach at any level, Joe Judge, formally introduced as the 19th head coach in Giants team history Thursday, has a pretty good idea about how he wants to build the Giants franchise moving forward.

“What I’m about is an old school physical mentality,” the 38-year-old Judge aid in his opening statement before fielding questions for reporters over the next 30 minutes.

If those words have a certain familiar feel to them, it’s because they were the same principles preached by Bill Parcells and then later Tom Coughlin, the former head coach responsible for helping to shape Bill Belichick, Judge’s most recent boss into the powerhouse coach he is.

The youthful-looking Judge is an old soul at heart who doesn’t plan to trot out fancy schemes or gadget plays. Analytics? He’s okay with that since it’s become part of the game, but he’s not going to obsess over what analytics say.

And establishing desired measurables and characteristics for players at each position? Forget about that—Judge doesn’t care if you play wide receiver, defensive end, or kicker because he’s more interested in what you do can potentially do to help the football team win, even if that something you can do doesn’t align with the stereotype characteristics of your position.

And he’s about effort, which as of Thursday is the only thing Judge was sure of regarding how he envisioned his football program unfolding ahead of him getting to know his players and assembling a staff.

That effort is going to start with how practices are constructed. There will be no spa days, no easing up on practices just because guys look tired.

And don’t expect Judge to be discouraged if you’re a player who doesn’t run the fastest 40 time, but you have good hands and a mental toughness that allows you to play faster than your legs may carry you.

These are all lessons that Judge learned from two of the greatest coaching mentors an aspiring NFL head coach could hope to have: Bill Belichick and Nick Saban.

Judge chuckled that most people would gladly pay thousands of dollars to sit in the same room with these two brilliant minds to pick their brains about how to build inning programs.

Judge, who plans to be himself, also intends to incorporate the lessons he learned from Saban and Belichick and use them as a foundation for running his program on a deeper level.

“What I learned from Coach Saban is it’s important to address everybody, not only on what they have to do, but how it should look, what we’re going to do to get there, and why it’s important,” Judge said.

“What you find out when you’re coaching players, they’re not robots. If they understand what the end result is supposed to look like and why it’s important, normally those players are going to take the principles you instilled in them and in the game make a player’s adjustment.

“You’re going to learn more from the players than they are as a coach because they’re going to find a better way to do it in the heat of the moment with a certain adjustment.”

The lessons learned from Belichick were so simple that they’re brilliant.

“Be flexible within your personnel, Judge said. “Don’t try to shove round pegs into square holes. Figure out what you have. Let them play to their strengths. … Everybody has something they can do.”

There’s another side to Judge that he wants his players to see—a side that doesn’t get talked about much in the business of the NFL.

That side is empathy, a practice that for as long as an athlete is part of Judge’s locker room, he can expect to receive whether he’s a first-year player or entering his 15th.

“We need to make sure that we take care of the players in our locker room, that we treat them the right way, that we teach them the correct techniques, and that we put them in the right situations to be successful,” he said.

“We’re going to ask these men to come in and give everything they have every day. We’re going to demand it, and we appreciate everything they give us. It’s our responsibility to take care of them daily and make sure that when they are done with our game, they are better furthered for the rest of their career as a father, a husband, and a professional in whatever avenue they take.”

All those elements are what Judge hopes will lead to one thing: a winning culture.

“The only culture we’re going to have in that building, period, is a winning culture. And what that means is everybody comes to work every day, regardless of how they feel, and puts the team first, period,” he said.

“Whatever you have going on outside the building, you’re sick, a little bit of pain, you have discomfort, you’re upset, you’re mad—put all that aside. You come in, you put the team first.

“We’re going to ask our players at times to do things that necessarily may not be what they have in mind for themselves, but if it’s best for the team, they have to be willing to go forward with it, because that’s what a winning culture is.”