Breaking
How To Get Your Startup Business Off The...
How To Create A COVID Safe Construction Site
How to Make a Good First Impression at...
Biden Was Right. The Hispanic Market Is Incredibly...
Plan To Buy An Electric Car? Is A...
Covid-19 Death Toll In U.S. Passes 200,000
Apple iOS 14 Has 25 Great Secret Features
5 Decisions That Will Increase Your Chances Of...
Coronavirus Is Shaping Up To Be Very Bad...
TikTok: Why Is Everyone In A Tizzy?
Is It Time For A Bank For Women?
As Israel Locks Down, Its Health Tech Sector...
California Increases Homestead Exemption In New Legislation
Buying The Bulge Is Dangerous
5 Strange Things Happening Right Now In The...
The Best Blogging Platforms (In-Depth Review)
How Will The Coronavirus Impact Your Finances?
How Xbox Series X Will Attempt To Avoid...
Virgin Orbit Seeking Over $100 Million As ‘Jaw...
Home Business How Many Stealth Warplanes Are There In The World—And Who Has Them?
Business

How Many Stealth Warplanes Are There In The World—And Who Has Them? 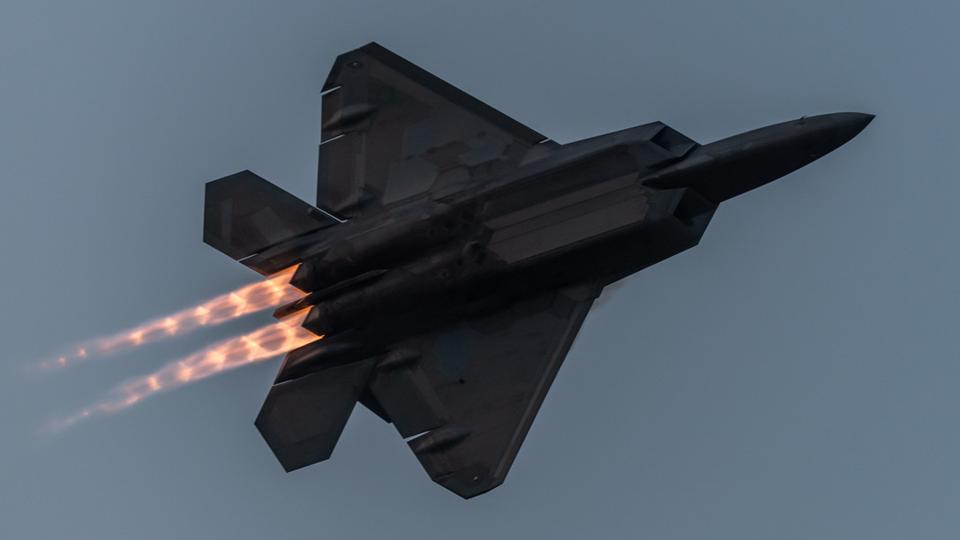 Lots of countries are developing stealth warplanes. Fewer actually are acquiring them. And of those that are, just one—the United States—is acquiring them in large numbers.

That’s the inescapable conclusion of a survey of all the world’s radar-evading aircraft programs. In the 37 years since the first flight of the U.S. Air Force’s F-117, the very first operational stealth warplane, the roster of air arms with their own low-observable aircraft steadily has grown.

Despite this, America still is the world’s leading operator of stealth aircraft. By a huge margin.

As of early 2020, there were a little over 700 warplanes in all the world that qualify as “stealth,” meaning their designs feature deliberate and effective efforts to minimize their signature on enemy sensors, particularly radar.

Around half of the stealth planes are F-35s. American F-22s account for another quarter of the global fleet. For all their prominence in the press and in Western and allied planning, the Russian Su-57 and Chinese J-20 remain few in number, respectively 10 and nine years after their first flights.

To be clear, there are many more manned stealth planes in development than currently appear in the inventories of the world’s air arms, to say nothing of in-service and in-development stealth drones.

The U.S. Air Force and U.S. Navy each have begun developing new manned stealth fighters to follow the F-22 and F-35.

The Chinese aerospace industry is working on as many as four new radar-evading types—potentially the H-20 bomber, the J-18 jump jet, the JF-XX fighter-bomber plus an unspecified fighter type.

Russian industry is working on the PAK DA stealth bomber. 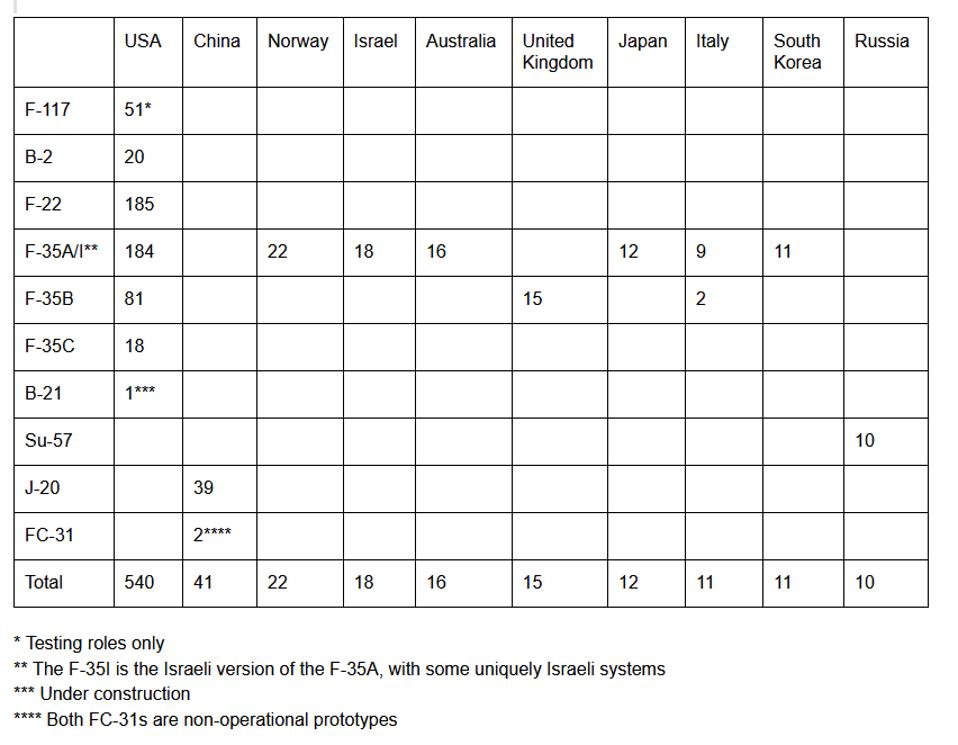 Then there are the outliers. The U.K.-Italian Tempest. Japan’s F-3. The KF-X that South Korea is developing alongside Indonesia. Turkey’s TF-X. All of these programs are in their earliest conceptual stages. It’s possible, even likely, that most of them will fail to deliver a single operational warplane.

The stealth warplanes you can count are the ones that are under construction or on tarmacs. Comparing air arms’ real low-observable inventories reveals the huge gap between the U.S. military’s stealth capabilities … and everyone else’s.

Consider the above chart, which draws on data from two databases—the 2020 edition of Flight Global’s World Air Forces warplane survey and the online inventory that Scramble, a Dutch aviation website, maintains. The chart excludes many F-35 customers that so far have taken delivery of only a handful of planes, such as The Netherlands with its so-far seven F-35s.

This snapshot of stealth-warplane inventories of course is already out of date, and for one major reason. While Lockheed Martin LMT built its last F-22 in 2011 and the B-2 and F-117 likewise ended production many years ago, Lockheed has been delivering new F-35s to customers all over the world at a rate of around 10 per month. The U.S. military alone expects to order no fewer than 2,300 F-35s over the lifetime of the program.

Against this, all other low-observable aircraft programs are statistical rounding errors. The United States is set to remain by far the world’s leading builder and operator of stealth warplanes, thanks mostly to the trillion-dollar F-35 program.

When it comes to stealth, talk is cheap, airplanes are expensive. America has the biggest radar-evading aircraft fleet because it has spent hundreds of billions of dollars building it. No other country has made, or is likely to make, anything like the same investment.

Behind the Scenes at MozCon Virtual