Breaking
Why We Must Update The Law For The...
The Tax Rules For Home Businesses And Working...
How To Use The ‘E.R.I.C.’ Framework To Tackle...
‘Destiny 2: Beyond Light’ Review: A Frozen Triumph
Five Steps To Faster Market Research
What’s The Upside For NetApp Stock?
Why Automated Machine Learning Is Becoming A Must-Have...
Is The Caruso 2020 A Serious Challenger To...
Your Smartphone Is Costing Your Fortune
Ignoring Climate Related Physical And Transition Risks Imperils...
The Economy: On The Other Side Of The...
A ‘Beaver Moon Eclipse’ Meets Mars And The...
Sony PS5 Reportedly Suffering With Frustrating 4K HDR...
Will 2021 See $318K For Bitcoin?
Black Friday 2020 Apple iPad Pro, iPad Air,...
7 Things To Expect As We Edge Closer...
Home Technology How ‘Mario Kart Live: Home Circuit’ Straddles The Virtual And The Physical
Technology

How ‘Mario Kart Live: Home Circuit’ Straddles The Virtual And The Physical 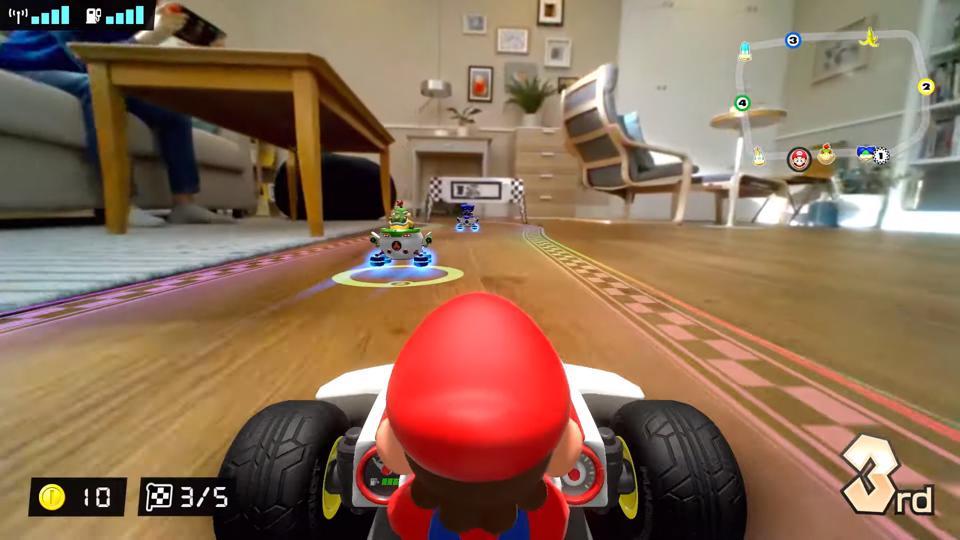 There are not that many kinds of games that require the developer and player to account for the presence of cats, but here we are. Mario Kart Live: Home Circuit is one of Nintendo’s most uniquely Nintendo offerings this holiday season: it’s a real-world version of Mario Kart, where players set up race tracks in their own homes and then control phyiscal Karts with their switches, melding the whole thing into an undeniably unique mixed reality experience. Erik Kain reviewed it earlier in the month, praising its ability to transcend gimickry to become a true Mario Kart experience translated to the physical world.

I asked the developers some questions over email about the process of developing a game that had to straddle the virtual and the real—something that Nintendo is no stranger to. The game was a collaboration between Nintendo’s in house development team in Japan and Velan Studios in the US, which had previously worked on other gamers with physical components like Guitar Hero and Skylanders.

One of the big challenges, according to the developers, was making the game work in a wide variety of physical spaces, given the infinite variability of places where people might be setting this thing up.

“We looked at different environments in different countries, created some original courses here at Nintendo headquarters in Kyoto, and used prototypes to test all kind of variables,” said Nintendo’s hardware lead Hiroki Ikuta. “We did face a challenge where the karts wouldn’t perform as well on carpeted floors if we lowered their speed to make them easier for beginners to handle. We had to get creative by tweaking the hardware to increase torque, and then get the software and kart to work together using data coming from the kart to adjust its output. By doing so, we were able to create a product that can be enjoyed on various types of flooring materials.”

“As a game designer, it’s really challenging to develop a game where you can’t control the game world,” added Velan co-founder Karthik Bala. “The whole project was a path of discovery on what worked and what didn’t work in merging the digital world with the real world. We had to think about how to convincingly anchor digital objects (especially when the kart is moving at high speed), how different lighting conditions affect computer vision, and how to blend the visual style of the game with the real world. We also had to think about how real-world objects and different surfaces affect the gameplay. In the end, the solutions had more to do with embracing the creative possibilities rather than feeling limited by the unknown.”

Some parts of the traditional Mario Kart experience didn’t translate to the game—the thunderbolt item, which shrinks down opponent’s kart when used, is a pretty obvious example of something you can’t do in the physical world. The developers were pleasantly surprised, however, that they were able to incorporate items like the self-steering and accelerating Bullet Bill, the enemy-seeking Red Shell, or course obstacles.

All in all, it’s a fascinating project, and one that seems indicative of the company’s future as much as its past. Nintendo has always had a fascination with the way that physical objects can be used in virtual experiences, but both Home Circuit and Ring Fit Adventure seem to be raising the bar on just how tightly the two experiences can be tied together. I’ll be curious to see how it develops, and if Nintendo winds up releasing more peripherals for it.

6 Tools To Bring Your Virtual Conferences To Life

Five Advantages Of Creating An Add-On Instead Of...