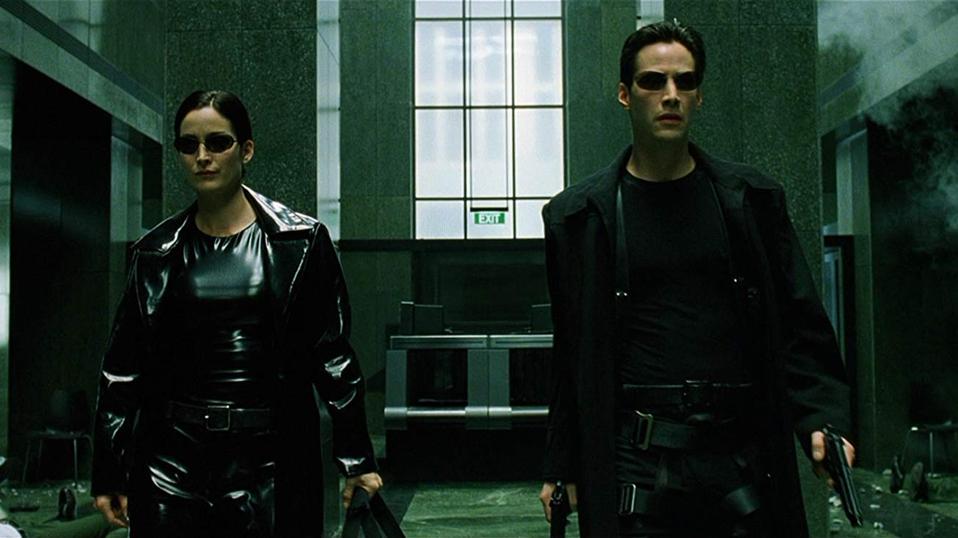 Keanu Reeves and Carrie-Anne Moss in ‘The Matrix’

The original sci-fi “hero’s journey” fable (The Matrix), the retrofitted action-adventure IP revamp (The Mummy), and the nostalgia-targeted franchise revival (Star Wars Episode One: The Phantom Menace) created the blueprint for Hollywood as we know it.

Had it not opened on Wednesday, I would argue that The Matrix was perhaps the best movie to open right on April 2, or my (then-19th) birthday. The Matrix opened on March 30, 1999, a Wednesday, where it personified the old rule about opening a movie on Wednesday. Don’t do it unless your movie is very good and the kind of flick that’s going to build buzz heading into the traditional weekend Fri-Sun frame. The Wachowskis’ sci-fi “Heroes Journey” adventure was one of three major action blockbusters released over just six weeks that would change Hollywood forever. Each smash hit, The Matrix, The Mummy and Star Wars Episode One: The Phantom Menace, would exist as a prime example of the three dominant kinds of would-be blockbusters.

The Matrix was the original. Its “the world is actually a simulation and your grim fate is not your fault” narrative was part of a trend at the end of the millennium, with Alex Proyas and David Goyer’s fantastic Dark City opening a year prior to The Matrix. But “original” doesn’t mean “completely unlike anything that’s ever been done before.” The Washowskis’ The Matrix was an of-its-time hybrid of cyberpunk mythology, anime, Hong Kong action cinema (most obviously the “two guns-blazing” sequences popularized by John Woo) and “The Hero’s Journey.” Moreso than even Star Wars, the adventures of Neo OKE , Morpheus, Trinity and Agent Smith hit almost every single goal post of Joseph Campbell’s “Monomyth.” That’s partially why the story felt so new and yet so comforting in its “You could be the special” storytelling.

Add in a perfectly-cast Keanu Reeves, along with Laurence Fishburne and relatively unknowns Carrie Anne-Moss and Hugo Weaving. Toss in two young filmmakers coming off a well-liked indie (Bound) being given $63 million and relative creative freedom, plus groundbreaking special effects but a low-enough budget to require character beats and storytelling (most of the film’s BIG action doesn’t happen until the third act). Finally, sprinkle a mix of timely subtext (and ahead-of-it-time commentary related to transgender identities), and you had a movie that surprised the hell out of the the entire world. It opened with $27 million in the Fri-Sun portion of a $37 million Wed-Sun debut, legging out to $171 million domestic and $463 million worldwide, Warner Bros BWA .’ second-biggest global grosser (behind Twister TWTR ) at the time.

Sad to say, while The Matrix represented the great potential of a “cinema-first” fantasy spectacular, it turned out to be among the last of its kind, at least in terms of commercial success. No, The Matrix was not the last original sci-fi blockbuster, but it was the last one of its relative scale to inspire a successful franchise, even 21 years later, as the curve started to heavily tilt toward branded blockbusters and retrofitted IP. That’s where the other two early-1999 biggies come in. If The Matrix was a gloriously “new” sci-fi spectacular, then Stephen Sommers’ The Mummy was an old IP re-imagined as a modern blockbuster. It was intended as an appetizer for the new Star Wars movie opening in weeks later, but it was itself a major summer event flick. 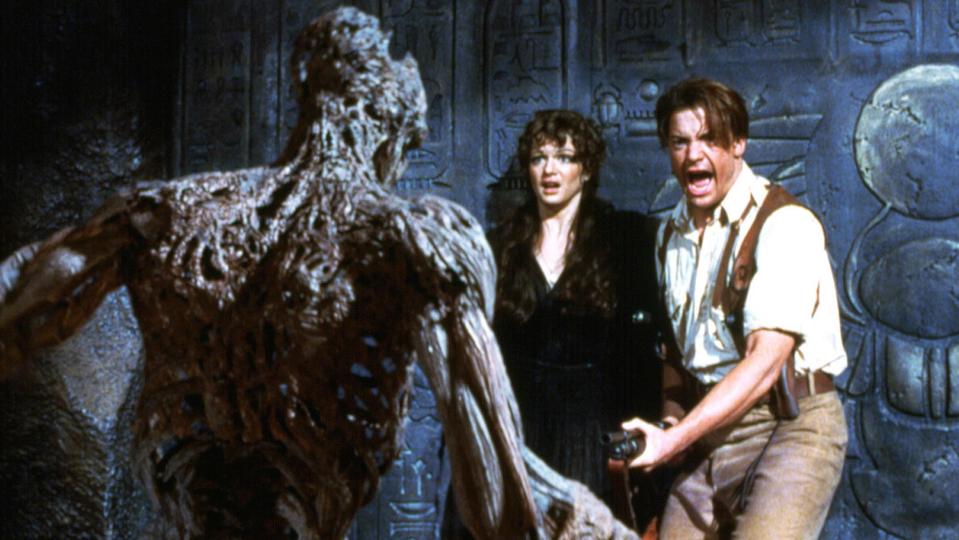 Offering a terrific cast of colorful characters headlined by Brendan Fraser and Rachel Weisz, the period piece adventure took the old Universal UHS horror property and created the next-best-thing to an Indiana Jones movie. Heck, without putting down anyone or anything, I’d argue that The Mummy is at least as good as two of the four Indiana Jones movies, partially because, yes, it made sure that Rick and Eve were as enjoyable and entertaining as the action and special effects. Like The Matrix, the film’s $80 million budget provided for major spectacle but required at least some restraint. Even in 1999, I was shocked that the title baddie didn’t show up until an hour into the 125-minute movie, and that the big CGI stuff didn’t overwhelm the movie until the very end.

The Mummy opened with $43 million, legging out to $155 million domestic and $416 million and spawned two sequels and a spin-off. Actually, Dwayne Johnson’s The Scorpion King led to three direct-to-DVD sequels. That makes The Mummy (along with Fast & Furious) another one of Universal’s accidental and ahead-of-its-time “cinematic universes,” but I digress. The Mummy wasn’t the first example of what Corey Atad once called the “epic-ification” of the modern blockbuster, whereby Hollywood takes an IP and retrofits it into a standard action/fantasy blockbuster movie (that would probably be the Salkinds’ Santa Claus: The Movie), but it was the one that popularized the notion. Its success would lead to the likes of Alice in Wonderland, Snow White and the Huntsman, Pan and Jack the Giant Slayer.

There is a case to be made that both The Matrix and The Mummy were chasing the shadows of the Star Wars trilogy, as Return of the Jedi was just 16 years prior and movies even on a scale of Stargate were still rare enough to qualify as events unto themselves. So it is a little ironic that, while I like all three movies to relative degrees, the actual Star Wars installment released that summer proved inferior to both proverbial pretenders to the throne (just as, in 2002, The Sum of All Fears, xXx and The Bourne Identity were all better than Die Another Day). Yes, Star Wars Episode One: The Phantom Menace proved slightly less magnificent opening after two comparatively trendsetting blockbusters, even as the film was a massive commercial hit.

George Lucas’ divisive, at least among critics and fans, The Phantom Menace opened with $64 million over the Fri-Sun portion of a $105 million Wed-Sun debut. It then legged out to $431 million domestic, still one of the leggier non-Christmas mega-movies of all time. It earned $927 million worldwide to become the second-biggest global grosser of all time behind Titanic’s then-$1.8 billion global cume. And it proved to be a prologue of the next phase of mega-movies that we’d begin to see two years later (Harry Potter and the Sorcerer’s Stone, Lord of the Rings: Fellowship of the Ring, Spider-Man, etc.). It may have been “three-star Star Wars,” but that was more than enough for folks still unaccustomed to movies as big as Episode One. 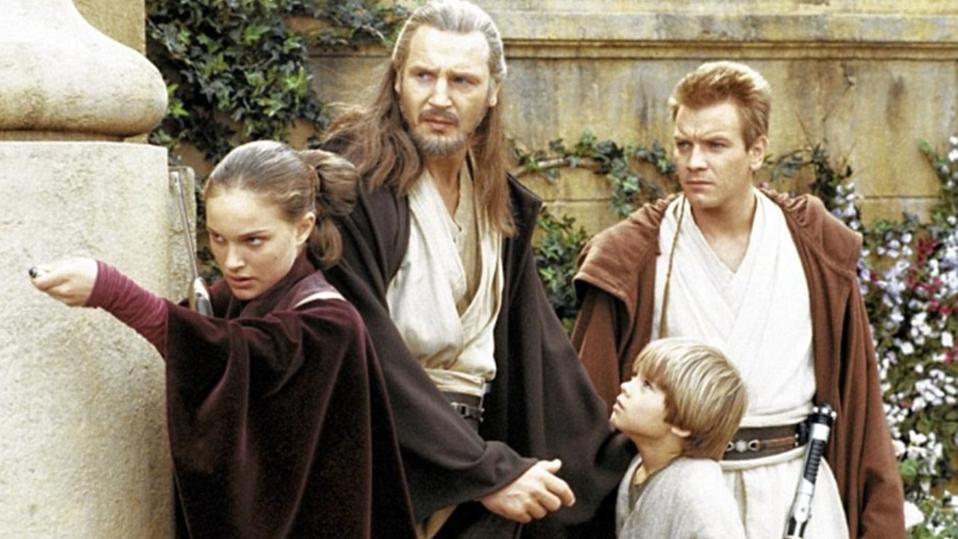 It was also more than enough for folks who just wanted more Star Wars, previewing the eventual global domination of the IP-specific, four-quadrant fantasy actioner. Lucas’ kid-friendly prequel contained more than enough of the things that audiences wanted from a Star Wars movie (outer-space dog fights, blaster shootouts, fantastical creatures, light-saber fights, a John Williams score, etc.), so that it wasn’t the greatest Star Wars story ever told wasn’t an issue. In May of 1999, the very idea of a movie as big in scope and scale as The Phantom Menace was still an event, as was the mere idea of a new Star Wars movie. It wasn’t really until Revenge of the Sith that Star Wars had to measure up with the next generation of fantasy blockbusters.

The Phantom Menace heralded a new wave of what Batman had merely previewed, mega-bucks blockbusters whose success was predicated on audiences wanting to see a specific IP played out on the silver screen. Yes, Batman unleashed a tidal wave of IP-specific adaptations, but only a few of them (Mission: Impossible, Robin Hood: Prince of Thieves, etc.) were able to match the scope and scale of what was considered a top-tier blockbuster. That’s why the comic book superhero movie didn’t get really big until 13 years after Batman, with Spider-Man offering the long-promised notion of your favorite superheroes in mega-budget cinematic glory. It also previewed the reboot/revamp era, whereby previously successful cinematic franchises returned to theaters partially in the hopes of ensnaring nostalgic fans of the previous incarnation.

Warner Bros.’ The Matrix was, save for Avatar, the false promise of entirely new (or even “new to you”) cinematic blockbuster fantasies ruling the multiplex, even if its “Hero’s Journey” storytelling would be copied many times over. Universal’s The Mummy showed Hollywood that money could be made by taking any IP and turning it into a fantastical action-adventure movie. Fox’s Star Wars: The Phantom Menace showed the value of cinematic nostalgia, ushering in an era of four-quadrant fantasy blockbusters and biggies rooted in IP (Transformers, Jurassic World, etc.) initially made popular when the adults of that era were themselves children. From March 30, 1999 to May 19, 1999, Matrix, Mummy and Episode One represented, as a whole, the templates that would define the next generation of Hollywood blockbuster filmmaking.

Can Your Business Survive If Your IT Person...

How to Build a Brand People Love