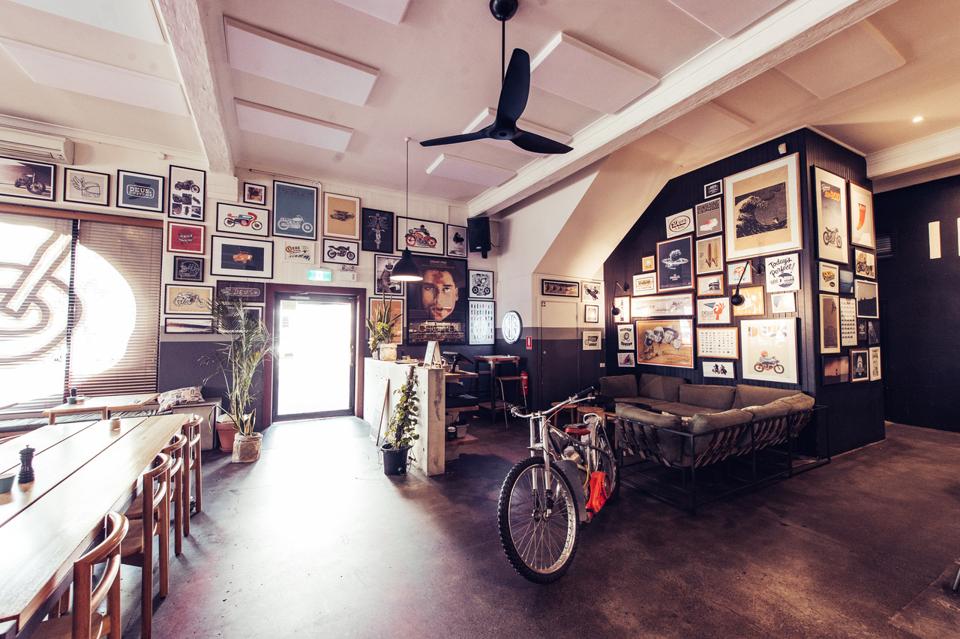 The idea of blending retail and cafe experiences isn’t a new one: In the early 1900s, department stores like Marshall Fields had tea rooms for shoppers which positioned the company’s stores not just as a place to shop, but also as a gathering space.

This model is still used by department store chains: Nordstrom has Ebar, Saks Fifth Avenue has L’Avenue, and Bloomingdale’s has Forty Carrots (just to name a few.)

However, in recent years there’s been a resurgence of this model that’s not confined to retailers in the department store category.

Niche verticals like motorcycle lifestyle brands are now also leveraging their physical retail spaces to introduce in-store cafes or full-scale restaurants, thus blurring the lines between shopping and dining experiences and tapping into the community-building opportunities that this model offers.

Forrester Research Retail Analyst Sucharita Kodali says that using the retail/cafe model comes with a unique set of challenges, but it can also offer these retailers some serious advantages.

“This approach doesn’t always work because the restaurant space is so competitive, but it’s a way to draw people into a store who may not come in otherwise—and that’s cheaper than paying for marketing,” she said.

Deus Ex Machina, founded in 2005 by Dare Jennings and Carby Tuckwell, is a brand within this category that pioneered the blended retail and cafe model.

Today Deus has nine flagship stores around the world as well as a number of smaller satellite stores including  cafe/retail concepts in Zurich, Istanbul, Byron Bay, Manly, Madrid, Ubud, and others.

Their reason for pursuing this blended model: It positions the company as a community hub and brings new audience members (and potential customers) into the fold.

Whether shoppers are dining in, browsing products, or watching custom cycles get made next door, they have a variety of different ways to interact with the brand—and it’s a sales opportunity, too: Each of their retail locations has a fully operational store that sells Deus’ entire seasonal apparel collection as well as other products.

Each flagship location also has its own ‘Address Tee’ with a graphic of the venue’s name and location—and while these items are sold as part of the brand’s global apparel range, for some shoppers they serve as a souvenir tee that signals their inclusion with the Deus community.

“The places we open become central to that community—it doesn’t matter where. People relate to the things that we’re doing and they want to belong,” Jennings said.

But Deus isn’t the only brand deploying retail spaces with a cafe element. Other independent and direct-to-consumer brands in this category are taking note of the model as well and using it to draw people into their brick and mortar stores while building deeper bonds with those who do.

In 2013, Williamsburg-based JANE Motorcycles is another example of an independent brand that opened a physical retail store blended with a cafe experience. 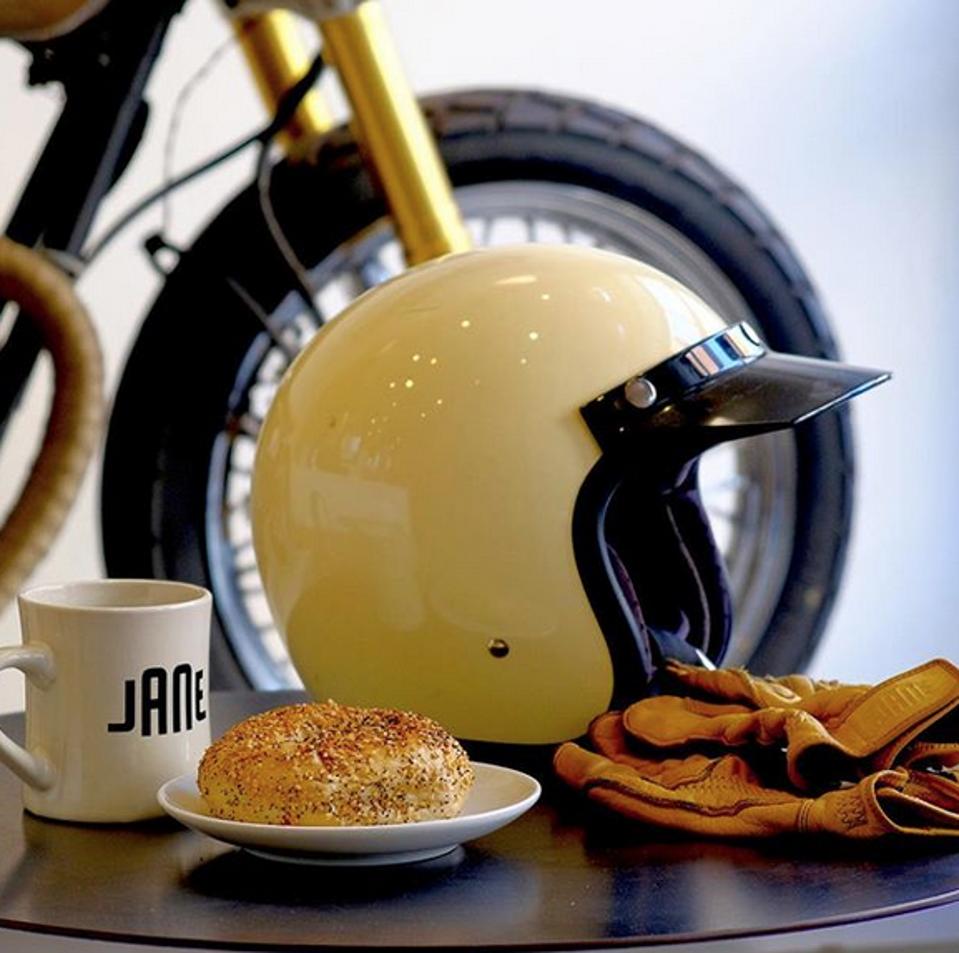 Jane Motorcycles has a small in-store cafe for shoppers.

“We wanted to give people a reason to come back every day, and we didn’t want our customers to feel pressured to purchase something in order to hang out here,” said Adam Kallen, JANE’s Co-founder and CEO.

“Because we offered a great cup of coffee, we gave people a place to visit—and in doing so, to explore our brand further at the same time.”

For JANE, the cafe only accounts for 10% of their total annual revenue, but having it as part of the retail experience has been a powerful tool for building a community and for introducing new customers to the brand that wouldn’t normally walk into a store focused on motorcycle apparel and lifestyle products.

Australia-based Iron and Resin also deployed this model, introducing a coffee bar with its store opening in 2015 (which later evolved into a full kitchen and restaurant in 2016.) 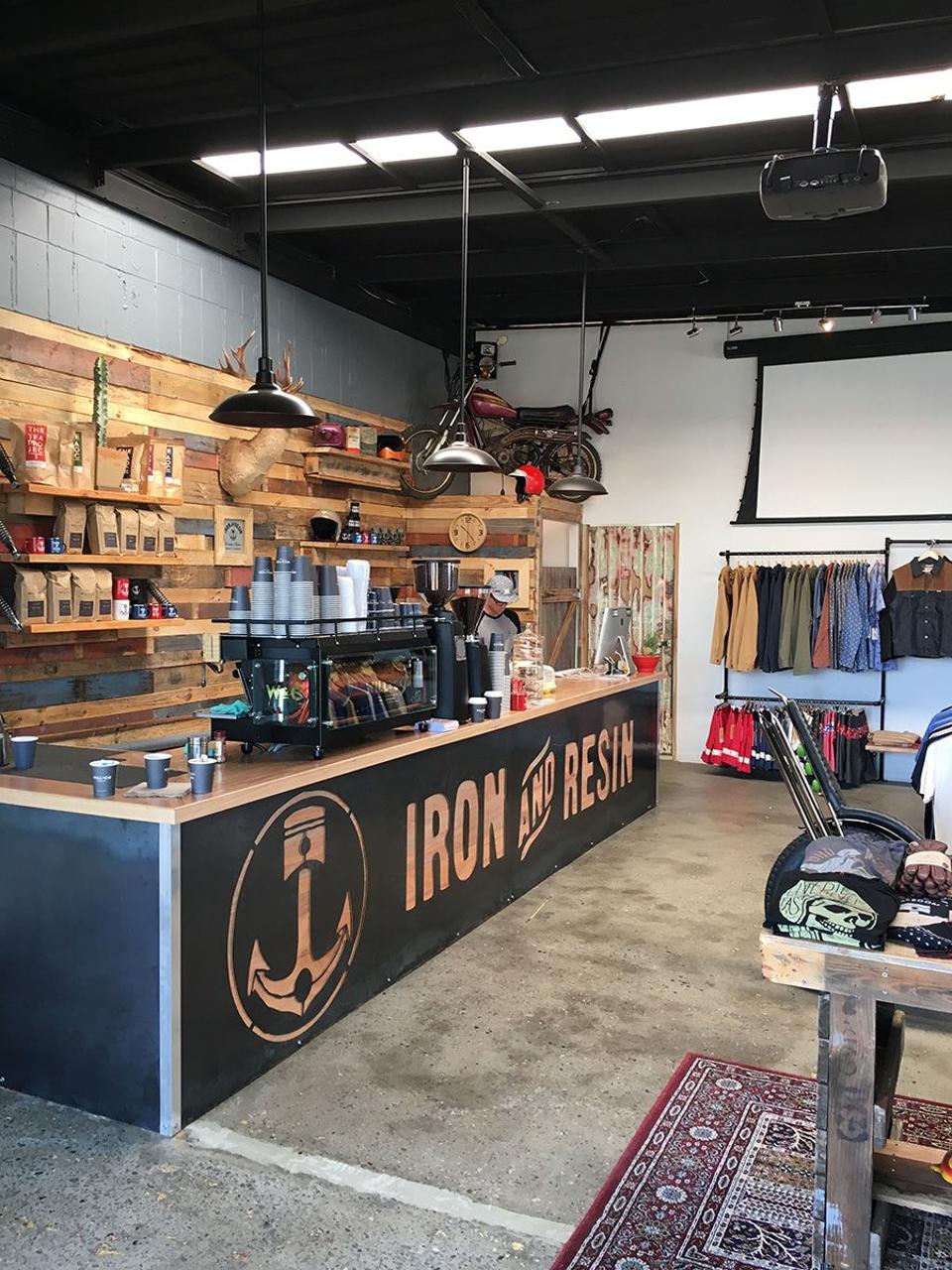 “We figured coffee might give riders a reason to hang around and talk motorbikes, but there was no way in the world we were going to do food or alcohol: A restaurant was the last thing on our mind,” said Bruce Robson, Iron and Resin’s co-founder. “But like all best laid plans, the kitchen was built to satisfy demand and feed the ever-growing numbers out for a weekend ride.”

An added benefit: It helps with cash flow.

Robson shared that the daily income from food, coffee, and alcohol sales is critical for the business’s cash flow. And while the cafe does entail increased staff requirements and costs, it helps pay the rent associated with maintaining a physical retail space—which is important as margins get smaller across categories.

In Iron and Resin’s case, inspiration for the blended retail experience initially came from Deus, but also from the concept of Hard Rock Cafe and other themed restaurants that could provide a hangout spot for enthusiasts.

Today, the cafe is a major component of Iron and Resin (and largely what’s associated with the company name in Australia.) “We’re probably better known as a place for the motorcycle crew to call home than we are a specific gear brand,” Robson said.

As a community hub for motorcycle enthusiasts, Iron and Resin has devoted itself to serving that community with bike-related events including used bike markets and swap meets, new product releases, and demo days. They’re also hosting more than 60 riders on organized ride tours in Vietnam and Sri Lanka.

“The tours are not great business, but they’re great for business,” Robson said. “The sense of community and interaction gets people talking, and of course the social media content can’t be beat.”

So does this blended retail/cafe model work across the board for retailers with physical stores?

Neil Saunders, Managing Director of Retail at GlobalData, says that for bigger chains this model works reasonably well, as they have the space and capital to make foodservice work.

However, for smaller retailers he notes the dynamics can be more challenging, as many lack the space to do these concepts justice—which can make it more of a distraction from the core business than a help. But when executed well, they can indeed be a boon to a brand’s bottom line.

“When done appropriately, a small café or place to get a bite to eat can make a difference. It adds a social element to brands and can become a point of differentiation. It can also boost the loyalty of existing customers,” he said.

The one caveat Saunders said retailers consider when it comes to deploying this model: A cafe experience can’t remedy weaknesses in the product mix. Product has to remain the core focus.

The Power Of Honesty In Growing Tech Startups...