Breaking
Renewables And Energy Storage Are Surging In Red...
Bitcoin’s Richest Are Selling, So Why Is The...
Apple’s iPhone 12 Will Cause Serious Problems For...
Rock Royalties – How A European Startup Is...
4 Differences Between Creative and Marketing Agencies
A Meeting Is A Gathering: The Most Common...
IRS Tax Extension To Jan. 15 For California...
Senate GOP Pushes Through Democratic Filibuster To Advance...
How These Successful Entrepreneurs Learned To Adapt And...
Six Ways Tax Rates Go Up For Retirees
How ‘Mario Kart Live: Home Circuit’ Straddles The...
6 Tools To Bring Your Virtual Conferences To...
COVID-19 And The Future Of Aging: Prospects For...
Harman’s New Citation MutiBeam 700 Is A Feature-Packed...
A Startup Raises $11 Million Using Zoom, A...
Is Your Business Stagnant? It Might Be Time...
Home Business How Much Blame Does The Detroit Pistons’ Front Office Deserve?
Business

How Much Blame Does The Detroit Pistons’ Front Office Deserve? 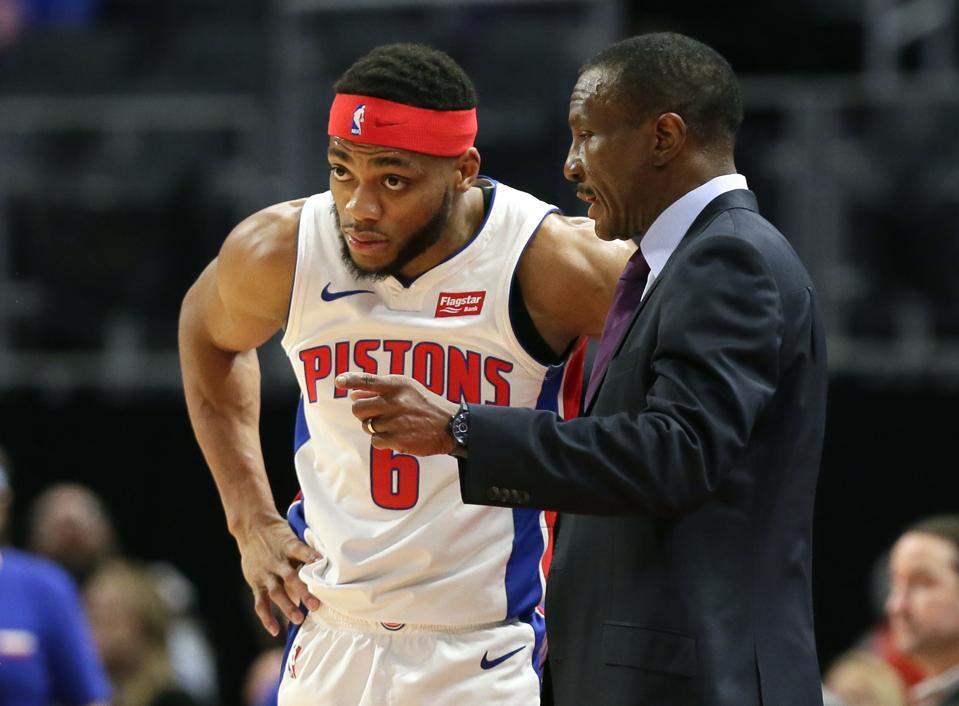 DETROIT, MI – DECEMBER 21: Head coach Dwane Casey of the Detroit Pistons talks with Bruce Brown #6 … [+] during the first half of a game against the Chicago Bulls at Little Caesars Arena on December 21, 2019, in Detroit, Michigan. The Bulls defeated the Pistons 119-107. NOTE TO USER: User expressly acknowledges and agrees that, by downloading and or using this photograph, User is consenting to the terms and conditions of the Getty Images License Agreement. (Photo by Duane Burleson/Getty Images)

The Detroit Pistons are in free fall. Since an exciting win over the Houston Rockets on December 14th, the Pistons have one win in their last seven games and are now 12-21 on the season.

Over the last seven games, the Pistons have the NBA’s second-worst net rating at -9.9, better than only the Atlanta Hawks in this stretch. You could have more numbers thrown at you, but suffice it to say, it’s bad. They’re bad.

The reasons that they’re bad aren’t that interesting. Their roster is not particularly well-constructed. There are a lot of injury-prone players on the roster, and most of them are hurt. With Blake Griffin being one of those players, there are next to no NBA teams who they can simply out-talent.

Stack it all up and it paints a pretty grim picture of this year and the immediate future at the very least.

Where things get interesting is when we look for places to point fingers of blame.

Whose fault is it?

We’ll skip the players for now, because generally speaking they play hard, a number of the youngsters have shown growth, and basically they do their job. While it’s been an awful season that promises to get worse, there have actually been a decent number of success stories on the roster.

Head coach Dwane Casey has been given a couple pieces of chewing gum, a cotton ball and a toothpick, and instructed to build a space ship. Derrick Rose has a minutes limit, Reggie Jackson has played only two games, Blake Griffin has been mostly bad, and that’s three of your best four players right off the bat who have been limited severely or completely.

Casey hasn’t been perfect, but perfection from the Detroit Pistons’ head coach hasn’t been a possibility in the slightest. Getting from one game to the next game intact has been tough enough.

The next rung up the ladder comes in the form of the front office. A uniquely-designed organization, the Pistons’ executives are led by senior adviser Ed Stefanski, the team’s de facto general manager.

Typically, when looking at a roster with poor construction, it’s fair to aim your criticism at the front office as they’re the folks who build it. However in this case, that is not entirely reasonable.

The Detroit Pistons have been forced to operate under significant financial constraint thanks to the largess displayed by the previous regime.

Operated by Stan Van Gundy as president of basketball operations (as well as head coach) and general manager Jeff Bower, they worked under the principle that in order to get players (any players, really) to come play in Detroit, they would have to pay a premium.

This principle is not unreasonable, mind you, but there is a limit to this. For example, role players received massive overpays, like Jon Leuer’s $40 million contract.

As a result, the roster is laden down nearly from top to bottom by overpaid players who would net negative returns on the trade market.

Injuries are a problem

In addition to overpays, Van Gundy and Bower were reckless in acquiring and extending Reggie Jackson, a player who had a troubling injury history before his arrival in Detroit. With knee issues and asthma which limited his ability to play heavy minutes at the best of times, the Pistons played a risky game that was likely to backfire.

Big surprise, it did.

A look at the extensive injury list for the Detroit Pistons this year reveals that the bulk of games missed comes from players acquired under the previous regime.

In fact, Jackson and Griffin represent the vast majority of the time missed due to injury. Luke Kennard is set to miss at least two weeks with a knee injury as well.

Mind you, it’s not fair to blame player injuries on the people who acquired them, but Van Gundy and Bower must bear responsibility for making the moves that brought two known and noted injury risks in Jackson and Griffin to Detroit.

What has Stefanski’s front office done?

A familiar talking point on Detroit sports radio and on social media is that the Pistons’ front office must pay for its mistakes. Heads must roll. When will those responsible for this morass be called to account?

The answer to that question: It happened about 18 months ago.

Every corner this franchise has painted itself into can be traced back to the Van Gundy era.

For example, Blake Griffin simply can’t be traded because his age (he’s 30), his health (it’s bad) and his contract (it’s huge) combine into something utterly immovable.

While you may hear frivolous rumors bandied about regarding Griffin, the instant he was acquired via trade, Detroit became the final resting place for the remainder of his five-year, $173 million contract which runs through the end of 2022.

However, Stefanski and company have been able to pull a couple rabbits out of their hat in surprising fashion. They drafted Bruce Brown in the second round of their first draft in 2018 and while he’s a flawed player, he’s developing and generally starts when the roster is healthy. They jumped at the chance to draft Sekou Doumbouya, who was a steal and expected to go much higher.

They also took Jon Leuer’s albatross contract and turned it into multiple second round draft picks and Tony Snell, their starting small forward through much of the season.

Finally, they managed (so far) to buck the trend of injury-prone players dropping like flies. They took a chance on Derrick Rose who has so far been quite good and also stayed mostly healthy against all odds.

What’s next for the Stefanski front office?

The Detroit Pistons have made moves around the margins under Stefanski’s leadership, aimed at shoring up depth and building their base of young assets. Doumbouya, Louis King and Jordan Bone (the latter two are the Pistons’ two-way players) have thrived with the Grand Rapids Drive, the organization’s G-League affiliate.

It’s been a long time since the Detroit Pistons had young players actively developing in house. Safe to say, Van Gundy not only likely botched all his draft picks (aside from the selection of Luke Kennard, who looks like he’ll be an excellent NBA player) but definitely botched developing any of them.

Pistons fans would prefer to see this young trio playing for the big league club, but there’s no rush. This season is lost, and their development trajectory (in whatever form Casey and Stefanski decide that will take) has supreme importance.

Stefanski will also need to navigate Drummond’s possible coming free agency (he has a player option worth $28.7 million) because losing him for nothing next summer would be unacceptable.

While the roster looks similar to what it was when Van Gundy ran the ship, it’s different. Though the team won more under Van Gundy than it has so far this season, there does appear to be an understanding of the task at hand in the current front office.

There’s a chaste level of discipline with the lengths of contracts handed out, the lack of trades involving players who would net poor returns. While true optimism is perhaps not on the horizon (as much because of the painful past as because of the future), Ed Stefanski’s front office has done nothing yet to discourage Detroit Pistons fans.

U.S. And China Technology Conflict—Here’s Why 2020 Is So Critical