Breaking
How To Get Your Startup Business Off The...
How To Create A COVID Safe Construction Site
How to Make a Good First Impression at...
3 Lucrative Hidden Benefits Of Podcasting
Your Stargazing Guide To Fall: One ‘Halloween Blue...
Mnuchin: White House Still Supports Direct Payments For...
How To Retain Your First Startup Product Users
China Shipments To The U.S. Are 7 Times...
Reviewing ‘The iPhone Of Air Conditioners’
The 8 Best CRO Companies of 2020
AARP BrandVoice: The Doctor Will See You Now,...
ThoughtSpot’s New Cloud-Based Tool Aims At Boosting Growth...
10 Ways Service-Based Businesses Can Generate Positive Word-Of-Mouth...
A Customer-Centric Culture Starts By Embracing This One...
Report: Struggling Black-Owned Businesses Need More Government Grants
Microsoft Races Ahead On RPA (Robotic Process Automation)
Why The Fed’s Outlook Paints A Sobering Picture...
As The End Of 2020 Approaches, The Cybersecurity...
Do Businesses Have A Role In Solving Poverty...
Home Business How One Democratic Governor Looked To Impose A Costly Joint Employer Regulation Amid A Historic Recession
Business 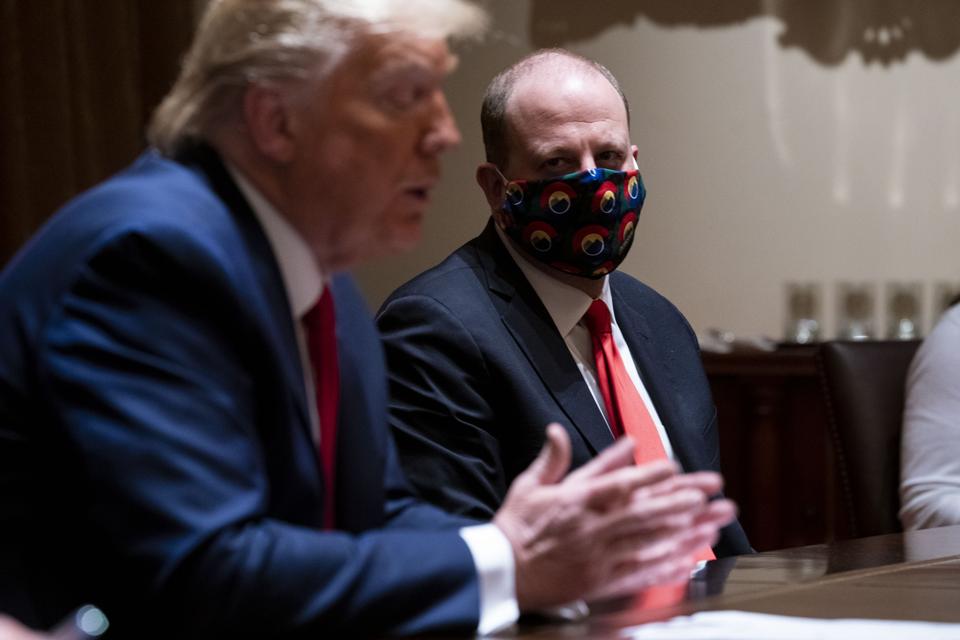 WASHINGTON, DC – MAY 13: Colorado Governor Jared Polis (R) wears a face mask as U.S. President … [+] Donald Trump makes remarks during a meeting in the Cabinet Room of the White House, May 13, 2020 in Washington, DC. (Photo by Doug Mills-Pool/Getty Images)

Colorado Governor Jared Polis (D) has stood out among his Democratic gubernatorial counterparts in 2020 with op-eds and remarks touting the benefits of lowering tax rates. Despite this business-friendly rhetoric, Governor Polis’s administration moved swiftly in recent weeks to saddle employers with a costly new regulation at a time when many businesses can least afford it.

At the same time that Colorado Governor Jared Polis (D) traveled to the White House in mid-May to seek federal assistance for employers and workers in his state, leading officials at Polis’s Department of Labor were pressing forward with the rushed implementation of a new regulation to expand the definition of joint employer status. This action in Colorado comes only a few months after the Trump administration’s Department of Labor clarified joint employer definition rules on a more narrow basis, bringing an end to a war on the franchise model initiated by the Obama administration four years ago.

That war began with since rescinded Obama-era guidance, which came in the form of a 2016 Administrator’s Interpretation, that was disastrous for franchise businesses. An International Franchise Association/U.S. Chamber of Commerce study found the standard imposed by the Obama administration led to a 93% increase in lawsuits against franchises and $33.3 billion in lost economic output.

The clarifying rule issued by the U.S. Department of Labor in February, which reversed the 2016 Obama administration expansion of joint employer status, specified that for a business to be considered and regulated as a joint employer of a given worker, it must, according to the National Labor Relations Board, “possess and exercise substantial direct and immediate control over one or more essential terms and conditions of employment of another employer’s employees.”

NLRB Chairman John F. Ring said that February rule clarification “gives our joint-employer standard the clarity, stability, and predictability that is essential to any successful labor-management relationship and vital to our national economy.”

“Employers will now have certainty in structuring their business relationships, employees will have a better understanding of their employment circumstances, and unions will have clarity regarding with whom they have a collective-bargaining relationship,” Ring added.

The proposed Colorado Department of Labor rule would effectively decouple Colorado from this federal joint employer standard, imposing a broader joint employer classification than what is applied in the other 49 states.

“It does not make sense to hold Business A liable for Business B’s mistake if Business A was not actively controlling Business B’s employees,” said Tony Gagliardi, Colorado director of the National Federation of Independent Business (NFIB), about the state Department of Labor’s proposed rule. “The federal government nicely clarified the matter recently. It would be nice if the state cleaved to that.”

The broadened joint employer rule proposed by the Colorado Department of Labor on April 15 would amount to the state level institution of the controversially broad and since-repealed Obama-era joint employer rule. In short, the new rule expands joint employment determination in a way that would make it easier for trial lawyers to sue Colorado businesses. NFIB argues that the proposed Colorado rule would “discourage larger firms from working with smaller firms” and would “upend legitimate franchising arrangements.”

A coalition of companies, trade associations, and non-profit organizations sent a letter to Colorado Department of Labor officials on May 20, explaining that “in creating a new hybrid standard that is broader than either of the prior ‘rules’ the Department relies on (and is certainly at odds with the U.S. Department of Labor’s current final rule), the Proposed Rule will inject significant uncertainty into the relationships nearly all businesses that contract with third party vendors, suppliers, and businesses will have.”

Both the substance of the proposed rule and the rapid process in which it has advanced are under fire.

“The Proposed Rule was published on April 15, 2020, for thirty days of public review, in the midst of a national pandemic representing the most dire public health emergency in the last century, which has wrought unprecedented economic damage nationwide, the likes of which have not been seen since the Great Depression,” the May 20 coalition letter added.

This change of heart from Colorado regulators is a lifesaver for the state’s 15,600 franchise businesses. These independently-owned small businesses are already struggling amid a sharp economic downturn. In addition to protecting employers, Colorado officials can ensure their state remains economically competitive by keeping proposed rule, which would severely diminish the state’s regulatory climate, off the books.