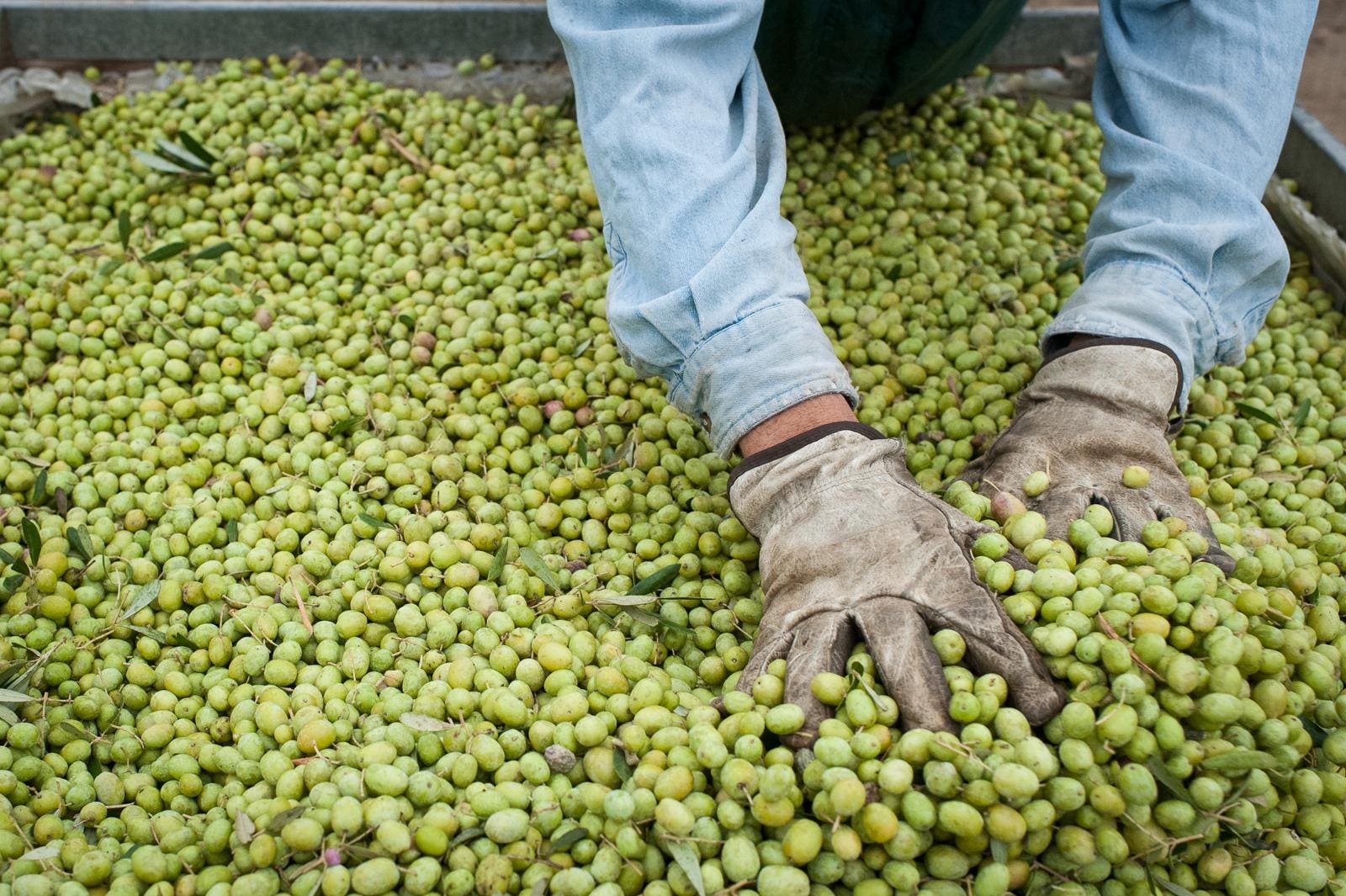 It’s currently the tail end of the harvest season for olive oil producers in California. One family-run farm is taking part in the annual mayhem to churn out enough bottles of olive oil for the holidays. They’re part of a small community of organic olive growers in the state.

California is slowly converting more and more land to organics. According to the USDA Agricultural Census in 2017, certified organic farmland had increased to 3,335 of California’s 70,500+ farms. Though California has the most organic farms in the country, they’re still a small slice of the overall pie in American agriculture.

Vincent Ricchiuti, a fourth-generation farmer near Fresno, California, saw that there was one more gap in the market: organic olive oil producers in the US. In 2008, when he and his family decided to foray into the olive oil market, more than 98 percent of the olive oil consumed by Americans was being imported from abroad. “There was a real opportunity to make something home grown,” he says.

In the past decade, Ricchiuti and his family have not only planted over 400 acres of olive trees, but have made a brand for themselves as one of California’s few organic olive producers.

“The current community of organic EVOO (Extra Virgin Olive Oil) producers is very small. We’re proud to be a multigenerational company on the leading edge of organic olive oil production here in California—it’s important that we be stewards for the earth and to future generations,” says Ricchiuti, Director of Operations at Enzo Olive Oil Co.

The olive oil industry is tainted with corruption and false reporting, coupled with blending of olives from various sources to produce inexpensive bottles that line most grocery store shelves. So, Ricchiuti decided to go a slightly more premium route: certifying their olive oil with the California Olive Oil Council. When asked how their olive oil stacked up to a $6 standard bottle of olive oil at the grocery store, Ricchiuti says:

“There’s a lot to understand about quality olive oil, especially since many imported olive oils are not held to certain standards that we measure stateside. I always tell people to look for the COOC seal—Certified Extra Virgin from the California Olive Oil Commission—it’s a great marker of quality. Their testing process is the one of the most rigorous in the world. Moreover, all of our olive oils are entirely organic, and they are grown and pressed right here in California. These are the main reasons our EVOO is prices higher than $6 per bottle.”

Some of these organic practices, he goes further to explain, include small steps that take time and labor: for example, after pruning the trees, they take the cuttings and break them down as mulch around the tree to retain water. Plus, because they don’t use any pesticides or herbicides, all the the groves have to be more carefully managed with natural alternatives. Growing trees in the San Joaquin Valley, an area that’s grappled with drought and water wars, has led the Ricchiuttis to invest in water-sensing technologies that enable them to conserve on the precious resource.

The challenges don’t stop there, he notes.

“Farming in California has become increasingly difficult. We have the most regulations and laws in the country, and that drives up costs. With costs going higher and prices back to the farm either staying the same or going down, it causes farms to merge, be bought out, etc. This makes it exceptionally difficult for the smaller farmer to make a living. The dream of the small farmer owning 40 acres and providing for his/her entire family is disappearing, you need much more production now.”

Richiutti’s great grandfather, Vincenzo, came to the country in 1914 from Italy. He started with figs and grapes. Then his son, Pat, joined him in farming after serving in World War II. They expanded their choice of crops, investing in stone fruits and almonds as well. The olive oil was primarily Vincent’s idea, something that he devoted time to learning from his Italian roots. After deciding that they’d build an olive grove at their Madera farm, Vincent Richiutti, with the support of his father, went back to Italy and learned from local growers there, and even bought a mill in his travels that they now use to press the olives.

The process is pretty straightforward, he says, requiring just a few pieces of machinery and they aim to repurpose as much of the waste as possible. Every autumn, the olives are collected from the trees (often by shaking the branches and letting them fall to the floor). They are then sorted for sticks, leaves, and debris; washed; and then pounded by three hammers at 3000 RPMS. That results in a paste, which is sent into a blender/mixer and the paste is broken down, releasing the oils. The solids that come out of this step are used for livestock feed. In a final step, the oil is separated from any remaining water.

For their flavored oils like clementine, chili, and basil, these ingredients are crushed along with the oil to infuse the oil and produce a pungent flavor. The gift sets are a good way to sample their offering — the Extra Virgin Olive Oils and a few flavored varieties.

While Enzo Olive Oil may not the be cheapest oil on the shelf, it’s taken on countless challenges to produce organic oil in California and that, Ricchiuti hopes will not go unnoticed. “I think this is important for consumers to understand—supporting small farmers is incredibly important, and every choice you make in your purchases makes a difference.”

Ways To Destress This Holiday Season While Minding Your Business