Breaking
How To Use Content To Draw Others To...
Apple Loop: New iPhone 13 Leaks, Apple’s App...
25 of the Best Add-On Slack Apps to...
How to Resolve Duplicate Content
How Millennials Are Changing The Face Of B2B...
Bloggers of the Month: Kelly Jackson & It’s...
As Bitcoin Suddenly Surges Over $50,000, The Price...
In The Race To Retail Dominance, Customer Service...
Meet Onesimus, The Enslaved Man Who Saved Boston...
How to Build a Sales Forecast Model
The Unexpected Ways COVID-19 Has Forever Changed What...
Google Posts: Conversion Factor — Not Ranking Factor
How To Bring Your Branding To Life
Coinbase Cofounders And Investors Poised To Rake In...
How To Stay Top-of-Mind For Your Audience With...
Introducing The Chrome Extension: Get Share Counts, Links...
Home Business How The Oakland A’s Outlook Changes Due To Their Division Rivals Loading Up
Business 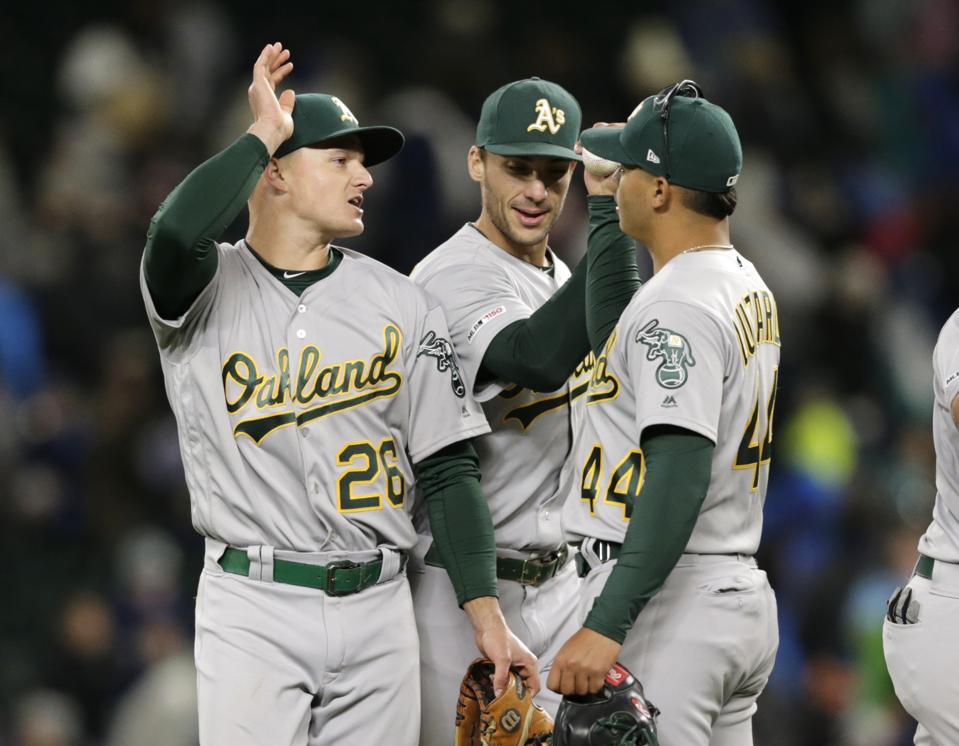 The Oakland A’s have had a quiet offseason, so far. It’s reasonable to expect a few additions, perhaps a trade for a second baseman or some pitching depth, but it’s unlikely any of it will be the sort of wholesale roster alteration that two of the A’s division rivals have undertaken. The Los Angeles Angels signed Anthony Rendon for a mere $245 million and traded for starter Dylan Bundy, and the Texas Rangers have added three fifths of a rotation in Corey Kluber, Kyle Gibson and Jordan Lyles. The Angels likely aren’t done either, with rumors circulating that they will add at least one more starting pitcher. What does all that mean for the Oakland Athletics? The implications may actually be greater for their wild card chances than their odds of taking the A.L. West crown.

The Angels and Rangers got better, to state the obvious, but their acquisitions won’t make them playoff contenders on their own. The Angels won 72 games last season, and their Pythagorean record and BaseRuns record don’t indicate that they deserved any better. The Rangers won 78, but they “should” have won 75 or 71, based on the aforementioned estimators. Each team has added something like five to six projected wins with their signings and trades. To contend in 2020, each team will need some combination of additions to their current roster and better performances from what they already have. The Angels can hope for some growth from Bundy, who has long paired potentially electric stuff with middling results, and Griffin Canning, who some believe is primed for a breakout year. Shohei Ohtani didn’t pitch in all of 2019, and he should be back on the mound in 2020. They also have one of the top prospects in the game in outfielder Jo Adell, who may be ready to join the Angels by midseason. Is that enough to add ten wins, plus another five or so from Rendon? Maybe. But it’s an optimistic projection that assumes no slippage from any other players. Also, just because the Angels are rumored to be chasing another starter doesn’t mean they will actually get an impact player. They may get outbid for Dallas Keuchel and Hyun-Jin Ryu, and decide their remaining options are too expensive or not a big enough improvement. The Angels could be dangerous, or they could sputter to another 70-something win season.

As for the Rangers, they are an interesting team that got great seasons from two pitching veterans in Lance Lynn and Mike Minor. Lynn, 32, had an incredible 6.8 WAR (that’s via FanGraphs, he was nearly a win better by Baseball Reference) and Minor, 31, was no slouch either with his 4.2-win season. Both were career highs—Lynn’s by a wide margin. Maybe that’s his new level, but the safer assumption is always that the truth lies somewhere between the breakout year and the track record before then. The Rangers doubled down on the mid-level pitcher strategy with Gibson and Lyles. Gibson is another pitcher who always seemed to underperform his stuff, and he’s likely moving to a better pitching environment.

All that said, the Rangers were a weak offensive team – 12% below league average according to wRC+ — and they haven’t done anything to address that. If Kluber isn’t on a steady slide into baseball oblivion, they are likely a bit better than .500, but all that gets you is the hope of overperforming into a wild card spot.

At the time of writing, the A’s chief competition for the A.L. West title is still the Houston Astros. Despite losing Gerrit Cole to the Yankees, Houston remains formidable. They will have Zack Greinke and Yordan Alvarez for full seasons in 2020, and barring a trade, will return nearly every prominent player from the 2019 roster that was a few innings away from back to back World Series wins. After the A’s lost in the Wild Card Game for the second straight year in a row, there was a lot of talk from their executives of just winning the division next season, but the plan for that seems to be to hope that their young pitchers deliver on their promise and their excellent offense keeps humming along.

Should the Astros again take the A.L. West crown, the A’s should be strong wild card contenders, but that’s where the strengthening division below them could come into play. Even if the Rangers and Angels can’t ascend to overtake Oakland, the A’s will face better ballclubs in their division games, and it’s likely the additions of their division rivals could cost the A’s a win or three. In a tight race, that could be the difference between a third shot at the Wild Card or watching two other teams face off in the one-game playoff. All the more reason for the A’s to bolster their own roster between now and Spring Training.