How These Corals Use Fish As Bodyguards Against Toxic Seaweed 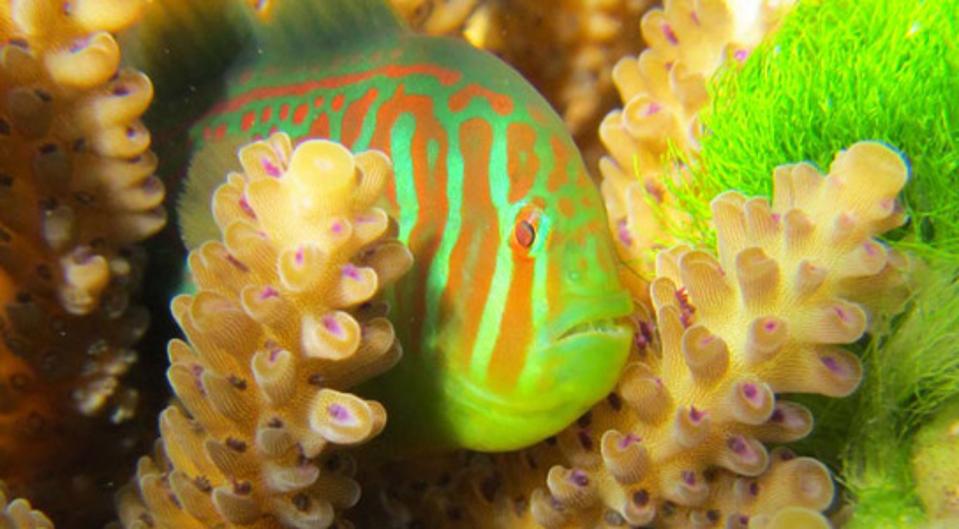 Toxic seaweed might be a coral’s worst nightmare. So what do corals do when danger strikes? They call in backup.

Like a routine cleaning service, seaweed-eating fish help corals by preventing a seaweed carpet from overtaking the reef. However, researcher Danielle Dixson suspected some reef fish may do even more to prevent corals from being covered with seaweed – they may also work as a coral’s on-call defense system against seaweed toxins.

Dixson thought gobies, a type of fish common to reefs (and recently revealed to be essential to fueling life on these reefs) might, in fact, have a more complicated relationship with their surrounding coral reef community than serving as just a source of food for other animals. Although these small fish can have delicate names like ‘glass goby’ and ‘sleeper blue dot goby’, these fish could be working as coral defenders. 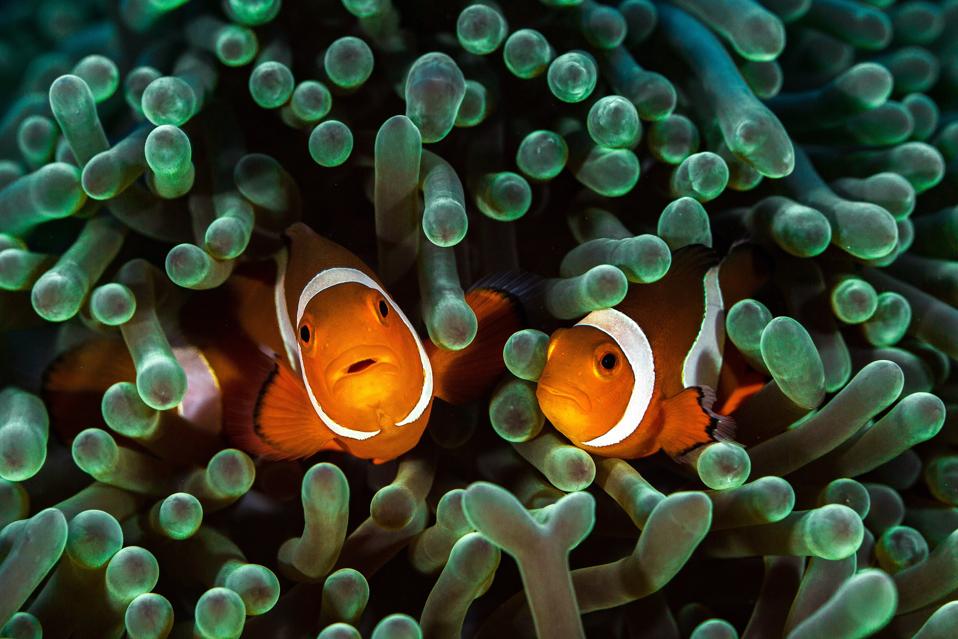 A pair of clownfish inhabiting an anemone, which they defend with their aggressive behaviors.

Many reef fish are known to be protective of their homes. Take clownfish, which, despite the personalities depicted in Finding Nemo, are actually quite aggressive when it comes to protecting what they see as their territory – anemone and beyond. There are also damselfish, which similarly defend their underwater land-claims by fighting, or really chasing and and ‘nipping’ at, all perceived beast and foe, whether that threat be another damselfish, a SCUBA diver, or even a much larger parrotfish.

Gobies, however, are generally not ‘aggressors’ in the world of fish. Most gobies live in the soft, sandy areas between reefs, while some live within the structure of the coral itself. The diets of gobies vary, too, with some being carnivores and detritivores – meaning they eat the ocean’s ‘leftovers’ that fall to the seafloor – while others are seaweed-eating herbivores.

However, some species of gobies, like the broad-barred goby (Gobiodon histrio), force other animals away from the corals the gobies claim as home. While these coral-dwelling gobies displace other coral inhabitants, they may also protect their coral homes when danger strikes, according to Dixson’s research. 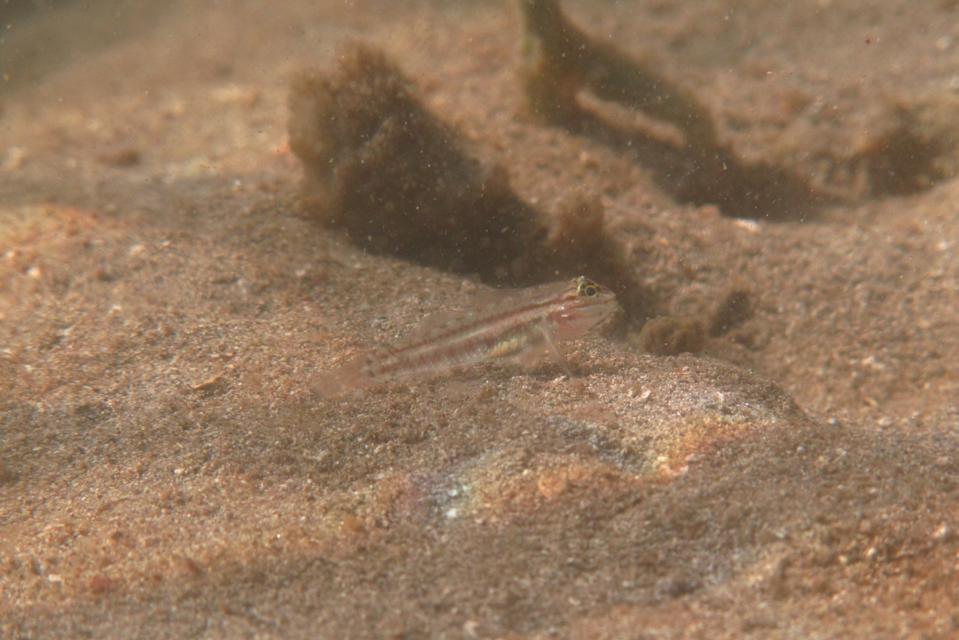 A goby blending in with the sand in Bocas del Toro, Panama.

Dixson and her team of scientists tested the idea that coral has a way to ‘call’ upon certain fish for help when under siege by toxin-releasing seaweed. To do so, strands of toxic seaweed were deliberately placed on corals, and the response of the fish was observed.

Low and behold, just a few minutes after the toxic seaweed was placed on the coral, two species of goby, the broad-barred and redhead gobies, promptly arrived to trim away the offender.

“This species of coral is recruiting inch-long bodyguards,” explains Mark Hay, a co-author of this published research and professor of biology at Georgia Tech.

As Dixson’s publication on her discovery explains, the gobies are beckoned by the coral by invisible underwater chemical signals – like smelling, but underwater. 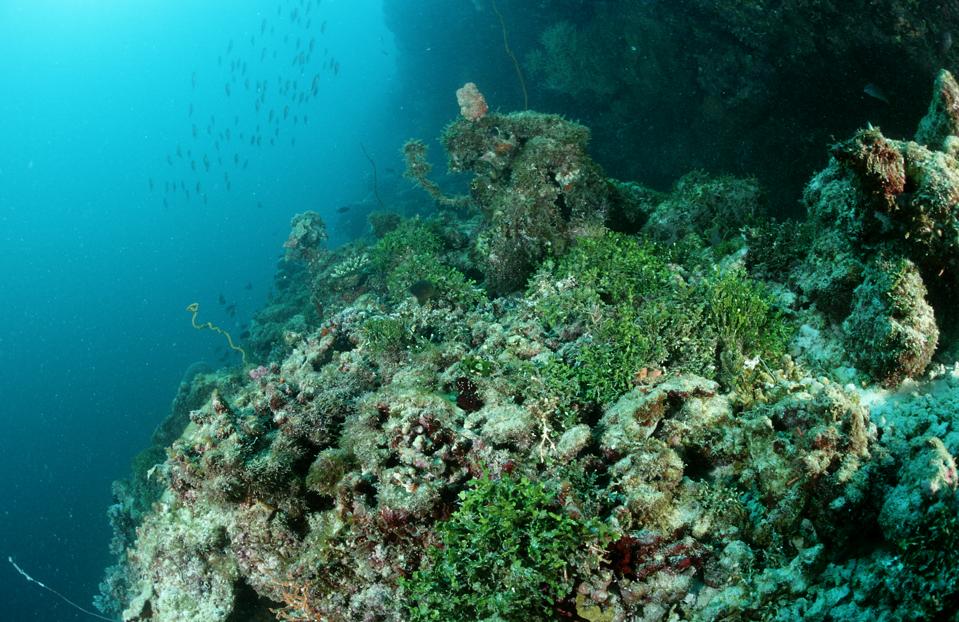 A coral reef overgrown with the seaweed in the Maldives Islands.

“There is a careful and nuanced dance of the odors that makes all this happen,” says Hay. “The fish have evolved to cue on the odor released into the water by the coral, and they very quickly take care of the problem.”

But why are the gobies inclined to help in the first place? Researchers believe it all has to do with the fact that these gobies call the coral ‘home’.

“The fish are getting protection in a safe place to live and food from the coral,” Hay notes. “The coral gets a bodyguard in exchange for a small amount of food. It’s kind of like paying taxes in exchange for police protection.”

So, through a chain of events, when toxic seaweed tries to take up residence on this species of coral, the coral is able to promptly beckon its goby-inhabitants to defend against the danger.

Danielle Dixson is now an associate professor at the University of Delaware’s School of Marine Science and Policy where her research focuses on how marine animals sense their environment.