How This African Soccer Team Is Helping More Women To Code

Kaizer Chiefs’ players pose for a group picture prior to the Premier Soccer League (PSL) match … [+] between Kaizer Chiefs and Bloemfontein Celtic at the Moses Mabhida Stadium, in Durban, on December 7, 2019. (Photo by Anesh DEBIKY / AFP) (Photo by ANESH DEBIKY/AFP via Getty Images)

With support from Kaizer Chiefs, – not to be confused with the British Indie band of the same name – Pink Codrs Africa have been able to expand that out into workshops and other opportunties.

For example, Hlongwane says, in 2019, Pink Codrs Africa, in partnership with Kaizer Chiefs secured 20 women an opportunity to be part of the Microsoft Professionals Data Science program.

Kemiso Motaung, Digital Manager at Kaizer Chiefs says it is always great to see young women who are eager to learn and make an impact in their societies.

“Pink Codrs and Kaizer Chiefs have engaged young women and students in South Africa around opportunities available to them in the tech space – young people are not aware that some of these opportunities exist,” she said,” We also let them know what we as KC are doing with PinkCodrs to empower young women by teaching them how to code and acquire industry skills that they can use to better their lives.”

Hlongwane says the recent Black Lives Matter global protests movement have put a spotlight on issues black people have faced for years, shifted the views of many and changed a lot of behaviours including how black people are treated in societies across the world.

Hlongwane says even in the developed world, only 26% of computing professionals are female. In the decorated innovation capitals of Africa, Nairobi and Lagos; the efforts to recruit, train, and attract more women in the field is staggering. The same applies at all hubs, universities and institutions across Africa.

“It is mostly young men developing apps, running product sprints, or engaging in other computing work, so Pink Codrs Africa organises recruitment campaigns and training seminars for women in South Africa, an initiative that will create innumerable programs that allow women to connect, collaborate and create in their communities,” she said, “We are creating a place where women developers, data scientists and tech enthusiasts can connect, share ideas, tackle challenges and learn.” 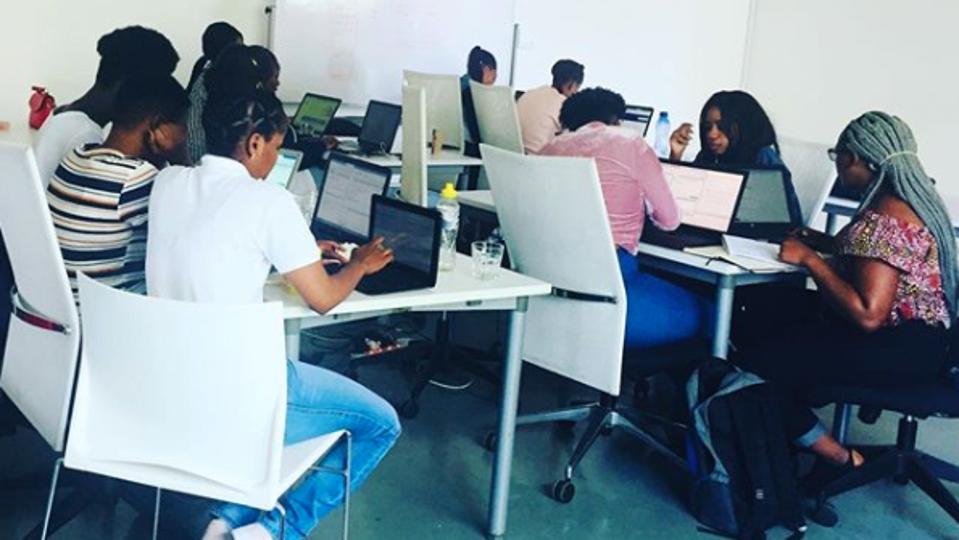 Hlongwane says what makes Pink Codrs Africa special is the aim to bridge the inequality gap in tech, aiming to add 100 000 women to the tech industry by 2030.

“I grew up in a township called uMlazi in Durban at a time where a household with a computer was considered rich, so the majority of us were only exposed to gadgets such as laptops from friends etc,” Hlongwane said, “I had always been excited by gadgets and apps, so when I had the opportunity to study IT (Information Technology) in high school, I jumped at the opportunity and never looked back.”

Hlongwane says she was the first in her family and community to be a software developer and to code.

“It was the most confusing thing for my parents to try to explain what I did for a living, ” she said, “I am still the only one in my community that knows what programming is but have a 14 year old sister also studying IT and excited to be a software developer.

Pnk Codrs Launch in Cape Town at the Cape Peninsula University of Technology in partnership with … [+] Kaizer Chiefs and SnakeNation.

Hlongwane  and PinkCodrs aren’t the only organization with a focus on preparing young black women for careers in STEM: in Brazil, 22-year-old Ester Borges Santos and her colleagues at NGO Minas Programam have created a welcoming, inclusive virtual study group on gender, race, and technology.

Borges, a researcher at Brazilian web governance and freedom of speech think-tank InternetLab, says it is important for companies and society as a whole to invest in the STEM careers of young black girls.