Breaking
Everything You Need To Know About EMI Option...
Social Security’s Government Pension Offset (GPO)-A Common Sense...
5 Practical Tips for Small Businesses Going Through...
Part II: How To Optimize Product Ownership In...
How Zoom Conquered Video Conferencing
How To Meet Customer Expectations This Holiday Shopping...
A Technology Solution For Muni Bond Disclosure
Five Common Ways To Fund A Small Business...
Your Floss Pick Habit Is Killing The Planet,...
Customer Service Recovery: Six Keys To Turn Complaints...
10 Unique Habits To Positively Impact Your Productivity
How Becoming A Learning Organization Is Key To...
IRS Increases Enforcement On Cryptocurrency: What This Means...
Optimus Prime Finally Gets The Diaclone Update He...
No, There Isn’t A Black Hole At The...
The Fed Could Be Repeating This Key Mistake...
Home Business How This Artist’s Designs Are Exactly What The World Needs Right Now
Business 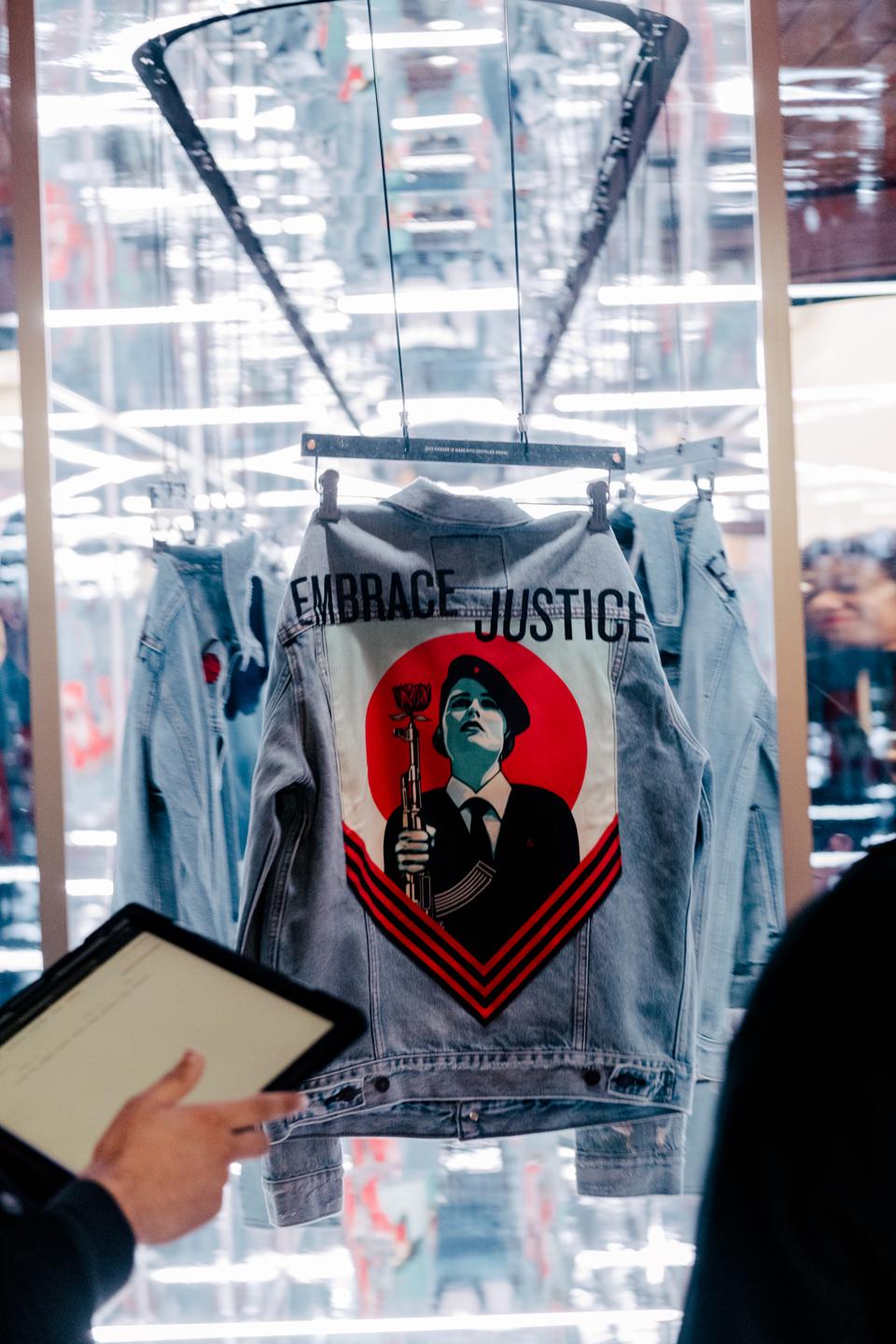 Courtesy of Paul and Williams

It seems that being ahead of the curve is in Shepard Fairey’s DNA. The multidisciplinary artist is considered one of the godfathers of street art, but he’s proven his prowess knows no bounds. He became one of the pioneers of streetwear when he launched OBEY, a clothing line that was one of the first to bridge the gap between fashion and street art.

As someone who has understood the societal impact of his work from the beginning, Fairey shook politics up when he created the now infamous Obama “Hope” poster that transformed the art scene as we know it. Now that it’s 2020, there’s no telling where he’ll go next. With all his exciting partnerships brewing, Forbes couldn’t help catch up with the creative innovator and all that he has going on. One thing’s for sure, he continues to add more and more to his plate, and he has no plans of slowing down.

During his interview, Fairey revealed a deeper look into his groundbreaking career and emphasized the ever evolving relationship between art and politics. Naturally, that’s not all he commented on. In addition, the impressive artist gave details on some of the special entrepreneurial pursuits he has slated for the year and beyond. 2020 isn’t even halfway over and he already has so much going on. Read through the interview and you’ll instantly feel Fairey’s refreshing, one-of-a-kind perspective on the different industries he’s organically become a part of. It’s inspiration at its finest and he should certainly be on everyone’s list as the one to watch.

Isis Briones: You’ve never shied away from creating art that makes a statement, and you made history with your Obama Hope poster. What role do you think art plays in creating change?

Shepard Fairey: “Art functions in a different way than most media by impacting the viewer emotionally, which then makes them ponder something intellectually that they might reject in another format. I think most people want to look deeper when they are made to feel, and that’s where the marriage of image and concept can really impact the conversation, socially or politically.” 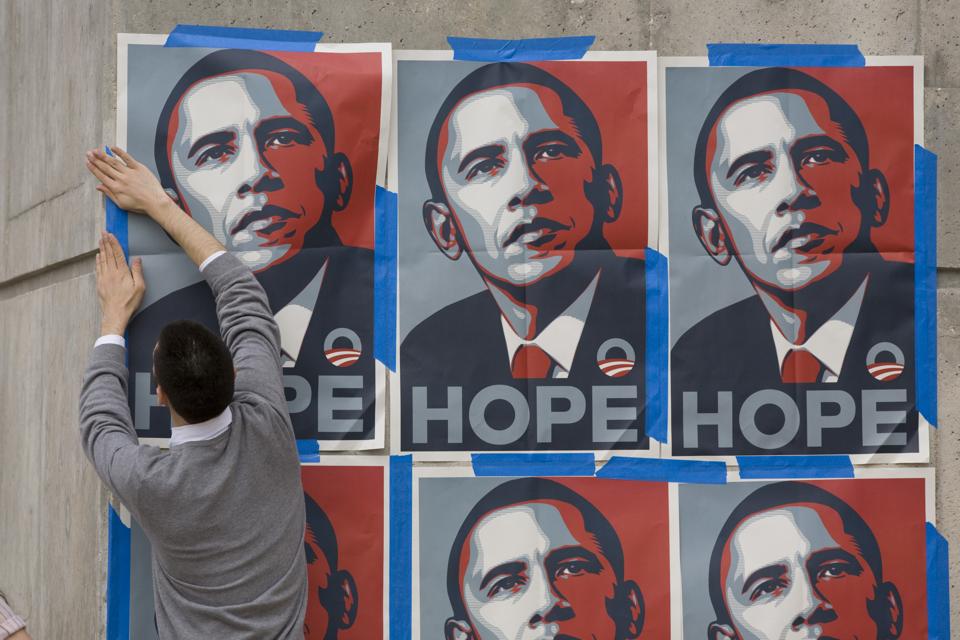 A supporter of Democratic presidential hopeful Barack Obama pastes up posters outside the Rec Sports … [+] Center at the Univeristy of Texas at Austin hours prior to the debate. (Photo by Robert Daemmrich Photography Inc/Corbis via Getty Images)

IB: You were early to the game when it came to not only mixing art with politics, but also fashion. How have you seen the relationship between art and fashion evolve over the course of your career?

SF: “Early on, most fashion lines worked with designers but not necessarily artists who had careers doing things in galleries or in my case, on the street. In the world of streetwear, artist collaborations and artist co-owned brands have become much more common as artists have become seen more as shapers of culture, who should be in front of the scenes rather than behind the scenes in fashion and elsewhere. I see fashion as an artistic, creative outlet, so I always saw my work in that realm as one more platform for my artistic practice.

I’m glad to see many brands collaborate with artists in a way that harmoniously combines the vision of the artist and the brand, rather than just hiring an artist to do some graphics or licensing a few images from an artist. I’ve collaborated with Levi’s as both an artist and a designer for 20 years.”

IB: You have a 2020 partnership with the ACLU and Levi’s. Can you tell me more about how that came about and what you hope to achieve?

SF: “I’ve worked with both Levi’s and the ACLU for many years, and I think the ACLU works very hard to protect important, guiding principles of our society and democracy. I’m proud to partner with Levi’s to align itself with such an important organization and proudly support the ACLU. We are excited to extend the partnership beyond Art Basel and into 2020 with more activity in key cities.”

IB: That sounds like an incredibly powerful partnership. You’ve called the pieces that you’ve created in partnership with Levi’s a “self empowerment starter kit” and some of them even feature powerful phrases like “Embrace Justice.” How do you think fashion and, in a sense, wearing your beliefs on your sleeve can contribute to meaningful change?

SF: “Fashion trends shift based on a trendsetter’s willingness to wear something that makes a visual statement that other people will then respond to and emulate. Why not embed meaningful statements into that process, because many people that have the courage to say something visually might also have the courage to say something socially or politically. Sometimes when people are afraid of using their voices, it only takes one person saying what they feel but have not yet expressed out loud to encourage them to participate as well. I’m always happy when I can create a mechanism or platform for personal and political expression. It has always been great therapy for me, so I know it must be for others as well.” 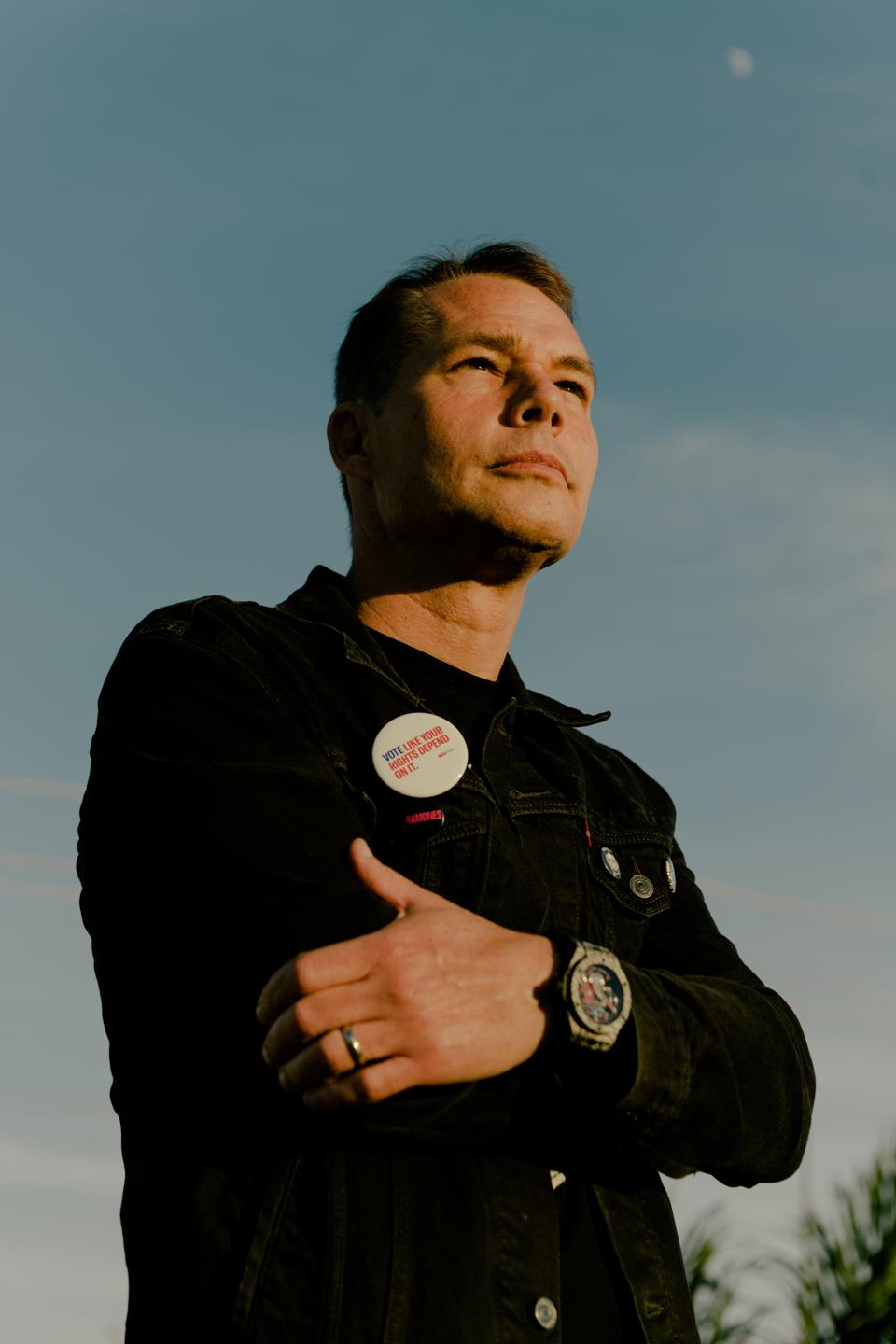 A snapshot of artist Shepard Fairey.

Courtesy of Paul and Williams

IB: Do you think new technology and being able to customize pieces from the collection helps to push that forward by allowing customers to be their own artists?

SF: “What defines art is very subjective, but, to me, it has a lot to do with creating something genuinely unique. All art is an evolution of what has come in the past. So when a customer uses a large number of variables including wash, finish, and graphics in a unique way on a custom garment, it is allowing them to make something that possibly no one else will have the same configuration. At the very least, I think it presents an opportunity for people to see how art-making can work, and how subtle changes in color, scale, etc. can make all the difference in terms of the outcome. These are the same principles I play with daily but with, of course, the addition of my illustration.”