Breaking
The Impact of Internships in Marketing
3 use cases of chatbots for critical services
How To Make Working From Home Appeal To...
Tips on How to Design an Office Space...
4 Tips To Help Build Amazing Customer Relationships
How Are US Pension Funds Responding to the...
Benefits of second-hand cars for your business
4 Reasons Why Your App Needs To Undergo...
Your Guide to Online Marketing
How to find a Solicitor in London
5 car tyre and safety tips for a...
Everything You Need to Know About Corporate Social...
Is Adaptive Leadership the Key to Motivating Employees?
Why business events are set to return with...
Business events set to return with a bang!
Expanding Internationally: 5 Things to Consider for eCommerce...
Home Business How This Black-Owned, Woman-Owned, And Veteran-Owned Company Is Giving You The Ultimate Coffee Experience
Business 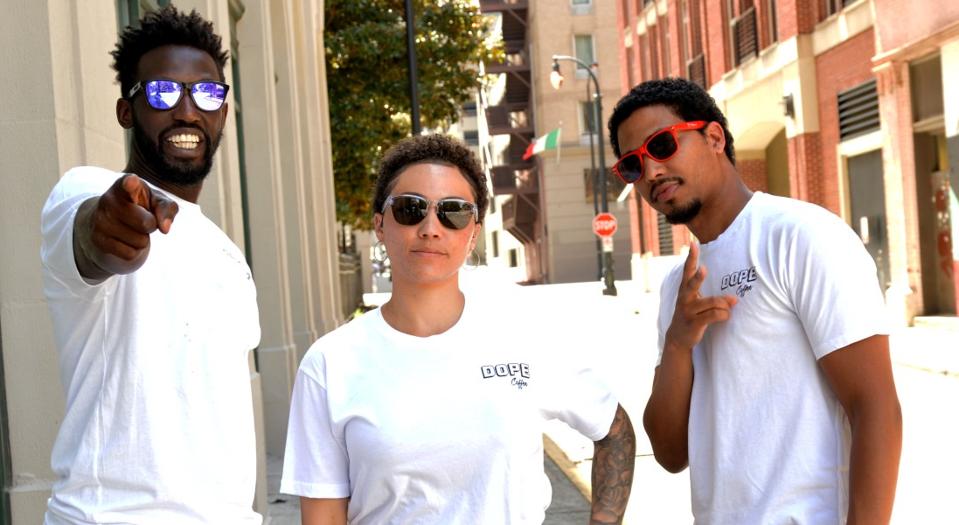 64% of Americans drink a cup of coffee a day, according to a 2018 study, and Americans consume more coffee than any other country in the world. While 7-Eleven, McDonalds, Starbucks, Dunkin’ Donuts are the leading coffee sellers in America, many coffee drinkers prefer to support their local coffee shops. With this understanding in mind, Dope Coffee Company was created. Former marine Michael Loyd Jr. developed Dope Coffee with a deep understanding of how “coffee can heal through conversation.” Loyd shared “Dope Coffee on day one…was going to be a counter-drug brand. It was like literally, let’s take a drug, which is coffee, well the caffeine in it, and let’s sell that and then let’s just teach more people in our communities to sell that, instead of drugs…but then it just started morphing…Black people, our culture is very ‘dope.’ Everything about it. So, when you take that word…it’s a loaded word to use…look at where we are today. I don’t think there’s any benefit to us having gone through [slavery] but if you look at it and see where we are today, I think it’s amazing.”

In 2017 Loyd, who had previously served in Afghanistan, left the Marine Corps, and experienced depression and PTSD following his departure from the service. At the end of 2018, Michael and his wife Chel Loyd decided to move to Atlanta and focused more of their energy on Dope Coffee. “We had already run two coffee shops under a brand called Solar Café, we had done that for three years, so we had already been in the coffee game. It was very local and we’re making a big impact on the community.” Michael, Chel and their friend Julius Cave created Dope Coffee in order to “give voice and visibility to the neighborhoods and people who aren’t heard from…Dope Coffee will uplift my culture, and we will do so in a way that everyone knows they are invited to the party,” Loyd shared in a LinkedIn post.

Atlanta has become one of the most thriving entrepreneurial cities, particularly for Black founders. Michael, Chel and Julius felt that this was the perfect launching place for Dope Coffee. “When we got to Atlanta, we saw some things that we had never experienced before. This place where you could be culturally aware and present…especially as a Black person…more people need to experience this type of community,” Michael explained. “Atlanta just has so much culture…the Civil Rights Movement was here. These were the same streets that Martin Luther King Jr. was marching…Atlanta, as a Black person, just gives you the opportunity to exist in your own skin…here in Atlanta, it doesn’t matter if I have my hair twisted out or if it’s cornrowed…I can walk into any business, any room, any meeting…it’s just a part of the culture here…it’s a city that’s just hustling and bustling for young business, entrepreneurs of color and especially women of color…we just wanted to create a brand that could speak to our culture. I spent a lot of time fighting against ideas that other people had, and I didn’t want to fight anymore…let’s just make our own place, make our own platform, and we would just do it the way we want it done.”

For those craving a taste Dope Coffee, free samples are being offered through the company website. “We’re primarily an e-commerce company,” Michael explained. “We’re more of a company of creatives…coffee as more of a conduit for conversations…really we look at ourselves as a storytelling brand, as opposed to being a location.” Atlanta residents who want to try the coffee first-hand can visit their pop-up shop Monday through Friday. The unique ambiance is what sets Dope Coffee apart. “When people come to see us, especially if you’re coming first thing in the morning, you’re going to be greeted by India Arie or Erykah Badu…one big thing we’re trying to do with Dope Coffee is…de-stressing our community. That’s a huge part of what it is…music is always going to be around Dope Coffee. There’s John Coltrane records in the background, a little bit of Bob Marley, take iconic Black culture and things that make us feel comfortable…the vibe is what makes us feel good. “

The Dope Coffee founders felt like there was something missing in most of the coffee shops they had visited. Creating an atmosphere that makes people underrepresented community members feel comfortable is at the heart of Dope Coffee. “Our community feels the exact same way I feel coming back from a combat zone…we’ve just been historically stressed…I just started looking at our community…we’re having a hard time talking about our issues. You can see the build-up of the stress and what it causes within our families and our communities. We’re expected to just bottle all this up and deal with it…we can’t walk around with that stress. It ties directly to a lot of the other issues we suffer from: high blood pressure, hypertension, these things are just chronically lingering in our community…to me, it takes a deliberate mindset…you have to set yourself up to be de-stressed…for the founders, we basically found the healing that we needed in life by creating this brand.” What is at the heart of Dope Coffee is creating a safe space for a group of people who have historically been left out, pushed away and excluded from opportunity, advantage, and privilege.

Dope Coffee prides itself on the fact that it’s a Black-owned, veteran-owned and woman-owned business. “At first it was just this Black thing,” Michael shared. “What started happening is, this is when Chel really started speaking up as a Black woman and just the way that she saw not only the company, but also the culture and the community…we weren’t thinking of the Black woman at the beginning because we really weren’t in touch with our culture and looking at the strides and where Black women, in particular, have taken our community…it’s been great fusing those together. The last piece, the veteran piece, I kind of have a different take on it…the cool thing about being a veteran-owned company—I love this country but I also realized I have a duty to make it better in the ways that I want…I just think as a veteran, we learn so much more than how to fight. We also learn how to build, how to create community.

For more information about Dope Coffee Company, visit their website.

Khabib Nurmagomedov Vs. Tony Ferguson Is Official…Again, A Look Back At The Cancelled Bouts