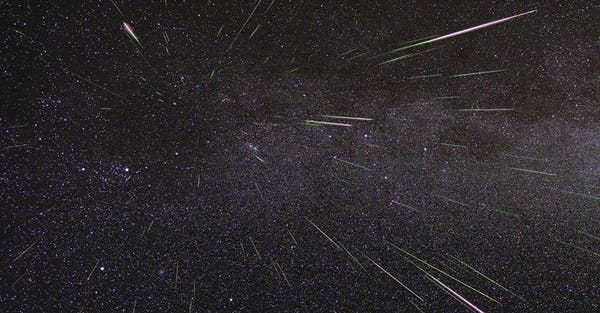 An array of shooting stars and fireballs is the hallmark of a meteor shower, but when you have to… [+] compete with a moon in the sky, the visual show is far less spectacular. Here’s how to defeat the world’s greatest source of light pollution.

Every year, as the Earth intercepts the debris streams of comets and asteroids that have crossed our planetary orbit, the same meteor showers recur in the same parts of the sky. Reliably, year after year, the two most consistently spectacular shows are August’s Perseids and December’s Geminids. While the Perseids are slowly diminishing as time goes on, the Geminids only continue to intensify.

Yet this year, 2019, a full Moon the day before the peak of the Geminids threatens to derail the quality of the experience for many. While forecasters are predicting up to 140 meteors per hour during the December 13/14 peak, the nearly full Moon means that unprepared skywatchers might only see about 15-20% of them. By taking a few simple steps, however, you can fight this natural light pollution and maximize the meteors you’ll see. Here’s the science of how to beat the full Moon and enjoy the Geminids to the fullest.

The orbital path of asteroid 3200 Phaethon takes it within just 0.19 AU of the Sun, but as far away… [+] as 2.4 AU, making its orbit highly eccentric. When it passes by the Earth, it moves at less than half the speed of a comparably massed comet.

The Geminid meteor shower arises not from a comet at all, but from an asteroid that passes relatively close to Earth every few years: 3200 Phaethon. Named for the mythological hero who attempted to pilot the Sun-god Helios’ chariot, this asteroid was kicked into an Earth-crossing orbit over 150 years ago. When it makes its closest approach to the Sun, the heat causes small bits of the asteroid to fragment, intensifying the debris stream with each orbit.

As a result, the Geminids have significantly strengthened over the past century-and-a-half, now rivaling or even exceeding the Perseids in the number of meteors seen at their peak. But unlike the Perseids, many of the Geminid meteors you’ll see are very faint for one important reason: they move much more slowly, relative to Earth, compared to most of the meteor showers which originate from comets.

This time-lapse photograph of Asteroid 3200 Phaethon was taken by amateur astronomer Ingvars Tomsons… [+] from Riga, Latvia, over a time period spanning approximately 34 minutes. The angular motion of this asteroid is approximately half the speed of a comparably close comet.

Asteroid 3200 Phaethon was only discovered relatively recently: back in 1983. It’s classified as a potentially hazardous, Earth-crossing asteroid, and makes an extremely eccentric orbit, with its closest approach taking it to within just 14% of the Earth-Sun distance, but its farthest position taking it over 200 million km farther away than Earth ever is from the Sun.

This brief timelapse from the 2013 Geminid meteor shower showcases a common point-of-origin for all… [+] Geminid meteors; the ‘exception’ that can be seen is a moving satellite.

When you have polluted skies, this greatly reduces the number of Geminid meteors you can see. While an easy fix for cloudy weather is to simply travel to where it’s clear, and the antidote for human-caused light pollution is to travel far away from artificial lighting — out into the country, away from city, highway, and coastal lights — there’s a natural source of light pollution that’s almost always unavoidable when it’s around: the Moon.

This year, there’s a full Moon that occurs on the night of December 11/12, and the peak of the Geminids occurs just two days later: on the night of December 13/14. This nearly full Moon will rise shortly after sundown, and will interfere with skywatchers worldwide who seek to observe the Geminids. The light pollution brought on by the full Moon can transform an otherwise pristine sky into one comparable to that of a heavily light-polluted city.

The Bortle Dark Sky Scale is a way of quantifying how much light pollution exists around you, and… [+] hence, what’s visible in the night sky. The less light pollution you have, both natural and artificial, the more a phenomenon like the Milky Way, a distant galaxy, a transient comet, or a meteor shower will be visually spectacular. A full Moon can transform even a pristine (1 or 2) sky into one that appears equivalent to a 7 or 8 on the Bortle scale.

Fortunately, there are observational tricks we can implement to help our eyes deal with this. The first thing we can do is to identify where the Geminid meteors will actually be coming from, as this will teach us where the best place in the sky is to search for these Geminids.

If you can find the bright constellation Orion, which appears in the eastern skies shortly after sunet, you can navigate your way towards the radiant of the Geminids. The belt might be prominent in Orion, but two of its stars are even brighter: Rigel, a blue star that appears slightly south of the belt, and Betelgeuse, an orange star that appears slightly north. If you trace an imaginary line from Rigel to Betelgeuse and keep going, you’ll arrive just a tiny bit higher in the sky than the bright “twin” stars: Castor and Pollux. Where those two imaginary, extended lines meet — connecting Rigel to Betelgeuse and Pollux to Castor — that’s the origin point for the Geminid meteors.

The Geminid meteors will fly out equally in all directions, but will all originate from this point… [+] in the sky, known as the radiant. For the best viewing experience, get a chair, bundle up, and take in the entire sky centered on that point as much as possible.

E. Siegel, made with the free software, Stellarium

In a typical year, the Moon wouldn’t be anywhere near this radiant, as the odds of having the Moon’s location aligning with this particular location in the sky is less than 10%. What you’d want to do, if that were the case, is to wait until late in the evening, sometime between the hours of 12 AM and 4 AM, so that the location where the Geminids originate is close to overhead. In that case, simply looking up would nab you the greatest rate of meteors.

Wherever the Moon was, you’d want to locate yourself so that there was some sort of light-blocking barrier — like a solid wall or a tree — blocking your view of the Moon. Simply by cutting off the portion of the sky that the Moon is present in, you can simply and easily (albeit artificially) darken the sky from your perspective. But this year, that “less than 10%” chance is actually what you’ll face, as the Moon almost overlaps with the location where the Geminids will originate.

In 2019, the almost-full Moon and the origin point of the Geminid meteor shower almost overlap, a… [+] rare occurrence that happens under 10% of the time. Some years, you get unlucky, but even when that’s the case there are still some wondrous sights to behold.

Should you just stay inside, then?

Not only is that a defeatist attitude, but it’s an unnecessary one. While you’ll never get the show you’d expect if there were no Moon at all, there are a number of coping strategies that can turn this year’s Geminids into a spectacular show after all. Here are the top three for 2019.

1.) Search for the Geminids in the post-sunset, pre-moonrise skies. Even with the radiant of the Geminids at or below the horizon, nearly 50% of all the meteors striking Earth will be visible to an observer during this time. From most locations in the Northern Hemisphere, simply looking for Geminids between 6 and 7 PM (especially from far-north latitudes, where it gets darker earlier) instead of later can net you closer to 50 or 60 meteors per hour, rather than a paltry 20.

Even when the Moon is present, using a natural or artificial barrier to block it (such as a tree, a… [+] wall, a car, or a building) can open up the surrounding, much darker skies, greatly enhancing your perception of any meteors that pass by at the relevant time.

2.) Observe at any time, but use a barrier to block the Moon itself. Although the atmosphere will still spread the moonlight out to other portions of the sky, the overwhelming majority of the Moon’s light pollution is going to be isolated to a small region of the sky: the region closest to the Moon itself.

Ideally, you can use whatever natural obstacles are around — trees, walls, buildings, even your automobile — to block the area immediately around the Moon while leaving as much of the area close to the Geminids free as possible. A great general strategy is to face towards the northern/northeast portion of the sky and take in as much of the Moon-free area you can see as possible, while having a barrier behind or to the side of you to obscure as much moonlight as possible. The greater the amount of dark sky you can see, the greater your odds of seeing good Geminid meteors are.

Even when a nearly full Moon is out, blocking out the most brightly illuminated portions of the sky,… [+] even by simply looking in the opposite direction, can greatly increase the sensitivity of your eye over what it would otherwise be with the Moon in view.

But by looking away from the Moon so that it isn’t even in your field of view, your eyes can adapt to the ambient darkness, and see any of the Geminid meteors that streak away from the radiant and towards your line of sight. Again, looking up and to the north, while the Moon passes through the southern part of the sky, is the most successful strategy you can take. Even without a barrier to block the Moon, you can at least double the unaided rate of ~20-per-hour.

At its peak, the Geminids can unleash nearly 200 meteors per hour under ideal conditions over the… [+] entire sky. This composite of a fraction of the sky was taken during the peak of 2016’s Geminids, even facing away from the radiant’s location.

The Geminids come only once a year, and with the Moon nearly overlapping with the origin point of these meteors during the 2019 peak, you might be tempted to write this year’s show off entirely. Don’t let the presence of the Moon deter you, though, as the astronomical tricks you’ll find here can turn a lackluster show into one of the year’s two best opportunities to view meteors here in our own Solar System.

While you won’t be able to see all of the ~140 meteors-per-hour that would be visible if the Moon were in its new phase, you can double or even triple the number you’d otherwise see by viewing the northeasterly skies before moonrise or by shielding yourself from the Moon’s natural light pollution. This isn’t the ideal year for the Geminids by any stretch. But if you can make it work this year, your enjoyment of the Geminids should be all but unstoppable.

This timelapse photo from the 2012 Geminid meteor shower is far more spectacular than what a… [+] naked-eye observer will see, particularly when contending with a nearly full Moon, but illustrates how spectacular the Geminids can be and why, even with the almost-full Moon, you should still try to observe it.